The compound 2-amino-2-deoxy-d-glucopyranose (d-glucosamine, GA) is abundant among the natural polysaccharides and glycoconjugates [1,2] and is a carbohydrate component of many cellular glycoproteins, glycolipids and glycosaminoglycans; consequently, it plays an important role on cell surfaces [3,4,5]. GA is a potent inhibitor for several types of tumor cells and acts without influencing normal cells [6,7,8,9]. The difference in reactivity between amino and hydroxyl groups in GA allows regioselectivity to synthesize derivatization with new features and functions [10,11,12]. These synthetic GA derivatives have demonstrated potent biological activity and are used in medicinal research [13,14,15,16,17]. Especially amino oligosaccharides and glycoconjugates are important for developing new biologically active materials with anti-cancer activity.
To explore the applications of GA derivatives further, GA could be polymerized to form a polymer with a stimuli-responsive architecture: this polymer might lead to derivatives that swell as a response to changes in environmental conditions such as temperature, pH, ionic strength, etc. [18]. Poly (N-isopropylacrylamide) (PNIPAM) is a well-known thermo-responsive polymer that changes its appearance in water from a clear solution to a turbid suspension at a relatively low critical solution temperature (LCST) of 32 °C, a temperature near that of the human body [19,20]. PNIPAM and its related polymers are widely applied for drug delivery and cell therapy.
A series of studies on the glucosamine-PNIPAM polymers have been reported for drug release or self-regulated insulin delivery systems. Typical examples are gels or microgels composed of poly-(acryloyl glucosamine) (PAGA) and PNIPAM [18,21], which can swell and release the drug in response to external environmental changes. It is known that most solid tumors have an acidic extracellular pH (6.85–6.95); obviously, the amino group of the GA played an important role in tumor suppression. However, the above polymers were N-acetyl derivatives and were synthesized by using the modification of GA through the C-2 amino group [22,23,24]. In addition, these glucosamine-carrying temperature- and pH-sensitive polymers were also prepared by free radical precipitation polymerization, and the molecular weight distributions of the polymers were broad and they were unable to control the distribution of functional groups. So far, only a few reports have been related to the C1 hydroxyl group derivatives of GA [25,26,27], and no reports have been related to prepare an initiator using the C1 hydroxyl group of GA for ATRP and synthesize end-glycosylational polymers. In this work, we take the advantages of ATRP to synthesize GA-terminated PNIPAM, and demonstrate that the thermo-responsive polymers can be used to inhibit cancer cell proliferation.

N-isopropylacrylamide (Aldrich, Cleveland, OH, USA, 98%) was recrystallized twice from a hexane/benzene mixture (3/2, v/v). Tris(2-(dimethylamino)ethyl)amine (Me6TREN) was synthesized from tris(2-amino-ethylamine) (TREN, Aldrich, 99%) according to the literature [28]. CuBr (Aldrich, 99%) was washed successively with acetic acid and ether and then dried and stored under nitrogen. 2-Bromo-2-methylpropionic acid (Acros, Geel, Belgium, 98%), 2-Bromopropionyl bromide (Aldrich, 97%), d(+)-glucosamine hydrochloride (Aladdin, Shanghai, China, 99%) and chemical reagents were obtained commercially and were used as received unless otherwise stated. The 3-[4,5-dimethylthiazol-2-yl]-2,5-diphenyltetrazolium (MTT) was purchased from Acros. Human Hepatocellular Carcinoma Cells HepG2 in culture and NCTC clone 929 cells (L-929) were purchased from the Type Culture Collection of the Chinese Academy of Sciences (Shanghai, China).
The 1H nuclear magnetic resonance (NMR) spectra of monomers and polymers in CDCl3 were obtained on a Varian Unity 400 NMR spectrometer. Molecular weights (Mn) and polydispersity (Mw/Mn) were measured using a gel permeation chromatograph (GPC), a Waters 510 pump and a Model 410 differential refractometer at 25 °C. THF was used as the mobile phase at a flow rate of 1.0 mL·min−1. The LCSTs of the polymer solutions were determined by absorbance at 500 nm, using a Shimadzu-2600 UV-Vis spectrophotometer with a heating rate of 0.1 °C·min−1. The LCST was defined as the temperatures corresponding to 10% decrease of transmittance. Polymer concentration was 1 mg/mL. Cell viability was evaluated by MTT, the optical density (OD) was measured at 490 nm with a microplate reader (Bio-Rad, Hercules, CA, USA). Cell viability was determined as a percentage of the negative control (untreated cells).
This section may be divided by subheadings. It should provide a concise and precise description of the experimental results, their interpretation as well as the experimental conclusions that can be drawn.

2.2. General Procedure for Synthesis of Polymers

GA-PNIPAM (i) and (ii) were synthesized as follows (Scheme 1). A mixture of CuBr and Me6TREN (1:1, v/v) in DMF/H2O (95/5, v/v) was placed on one side of an H-shaped ampoule glass and stirred. A mixture of NIPAM and an initiator in DMF was placed on the other side of the ampoule. Nitrogen was bubbled through both mixtures for 5 min to remove any oxygen. Three freeze-pump-thaw cycles were performed to degas the solutions. The ampoule was placed at room temperature for several hours. The reaction mixture was then diluted with DMF and purified using a neutral Al2O3 column. After evaporation of the solvent, the crude product was purified using column chromatography (silica gel) to obtain polymers as a white power. Then deacetylated for protected hydroxy in the sodium methylate and methanol solution to obtain GA-PNIPAM (i); removed the phthalimide group from the protected amino group to obtain GA-PNIPAM (ii).

Cell viability was investigated using NCTC clone 929 ells (L-929) and Human Hepatocellular Carcinoma Cells HepG2 in culture. After incubation for 24 h in 96-well plates (8 × 104 cells/mL per well) using Dulbecco’s modified Eagles medium (DMEM) in an incubator (37 °C, 5% CO2), the culture medium was mixed with 200 μL of DMEM containing a sample of PNIPAM homopolymer, GA, GA-PNIPAM (i) and (ii) with a range of sample concentrations from 0.1 to 1000 μg/mL (according to the literature [18]): the mixture was further incubated for 48 h. Each sample was tested in six replicates per plate. Then, 20 µL of MTT solutions was added to the mixture in each well, which was incubated for a additional 4 h. Next, 200 μL of DMSO was added, and the mixtures were shaken at room temperature. Six replicate wells were used for the control and test concentrations for each microplate. In addition, HepG2 cell suspension concentrations of 1 × 105 cells/mL, 6 × 104 cells/mL, and 4 × 104 cells/mL were used the longer duration exposure experiments (24 h, 48 h, 72 h and 96 h exposures, respectively) at each time-point of samples. The cell viability (%) was calculated according to the following Equation (1):
Cell viability(%) = (A sample/A control ) × 100%
where A sample was the absorbance of the cells incubated in DMEM and mixture and A control was the absorbance of the cells incubated in DMEM.

Aqueous PNIPAM solutions show a LCST, which has been attributed to the association of polymer molecules through intermolecular hydrogen bonds and non-polar bonds creating large aggregates. When PNIPAM contains different amounts of hydrophilic glucosamine moieties, LCST changes. The LCSTs of the copolymer solutions were determined by turbidimetry. The results are shown in Table 2 and Figure 5. From the GA-PNIPAM (i) polymer P1–P5, the highest LCST was observed at 43.6 °C for 19.19% of GA (P1), which was shifted to 8.9 °C for 5.37% of GA (P5). LCST declined to 9.2 °C of the GA-PNIPAM (ii) polymer from P1 to P5, and all the results indicated that the hydrophilic GA could improve the LCST of the polymer and the content of GA directly affected the solubility in water. In addition, the amount of the GA-PNIPAM (ii) P1 was higher than that of the GA-PNIPAM (i) P1; the difference was 0.82%, and the difference of the LCST was only 0.1 °C. This phenomenon may be caused by the ability of hydroxy or amino acids to form hydrogen bonds with water being different.

In our current study, by introducing the hydrophilic monomer GA into the PNIPAM chain, the LCST of the resultant polymers could be tuned to near body temperature for better biological application. So P4 of the GA-PNIPAM (i) and (ii) was used to evaluate the cytotoxicity. A cytotoxicity study on L-929 and HepG2 was conducted to investigate the biocompatibility of the PNIPAM homopolymer, GA, GA-PNIPAM (i) and (ii). The percent of cell viability was determined by comparison with cells that were not exposed to samples, which were used as the control group. No statistically significant cytotoxicity of the PNIPAM homopolymer was observed in cells, as shown in Figure 6A,B. Neither the P4 GA-PNIPAM polymer (i) nor (ii) was toxic in either cell line over a broad concentration range from 0.10 to 1000.00 μg/mL, and no clear difference between polymers was observed with regard to cytotoxicity to L-929. The viability of the HepG2 cells decreased to approximately 90% for GA-PNIPAM (i), whereas the value was only 80% for GA-PNIPAM (ii). It showed that GA-PNIPAM (ii) had suppressing activity for cancer cells; Figure 6C also shows evidence of this, which may be due to the amino groups present in GA-PNIPAM (ii). From Figure 6B,C), GA (reduction by sodium methylate) could effectively kill tumor cells, but the suppressing activity of GA-PNIPAM (ii) was weaker than that of GA. This might be due to the GA content of the polymer that was synthesized by ATRP being lower than that of the pure GA. Furthermore, at each concentration level of the dispersions of the GA and GA-PNIPAM (ii), cell survival decreased considerably as the time increased, as shown in Figure 6C, and cell activity was decreased along with the concentration. GA and GA-PNIPAM (ii) could change the growth state of HepG2 cells at the concentration of 1000.00 μg/mL after feeding 24 has shown in Figure 6D. HepG2 cells had a good condition and grew vigorously at the initial experiment (Figure 6D-1); when the GA and GA-PNIPAM (ii) were incubated in the cells, a large number of necrotic cells appeared, especially in the GA group. These indicated that GA-PNIPAM (ii) had the inhibition of tumor cell growth, and it could be a new smart material for antitumor effects and it may enhance the biocompatibility of GA for biomedicine.

Two end-functionalized PNIPAMs were synthesized via ATRP using different GA initiators which prepared through the amino acid at C-2 and the hydroxy at C-1. The GA-PNIPAM (i) and (ii) had a narrow dispersity and thermo-responsive property; their LCSTs were higher than that of the NIPAM homopolymer and these were attributed to the incorporation of the hydrophilic GA. The MTT assay showed that GA-PNIPAM (i) and (ii) had no toxicity for cells, and GA-PNIPAM (ii) had inhibitory activity for the tumor cells and no effect for normal cells, and thus it maybe have a potential application in antitumor therapy.

We are grateful to be financially supported by the Jilin Province education Department Science and Technology Development Project (2015394), the Jilin Province Health and Family Planning Commission, the Youth Foundation Project (2014Q049), and the Jilin City Science & Technology Innovation and Development Projects (No. 20166032, 20166033). The authors would like to thank all of the reviewers of this article for their comments and suggestions. 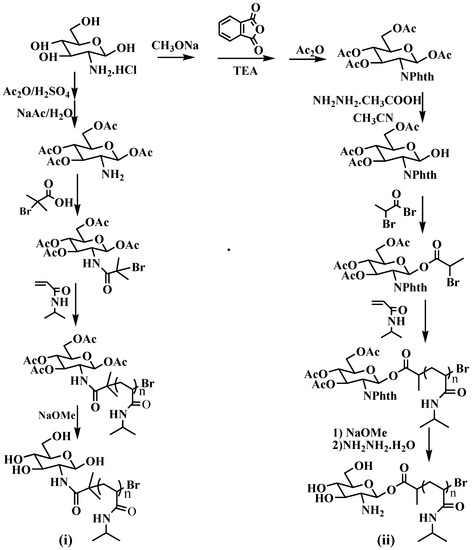 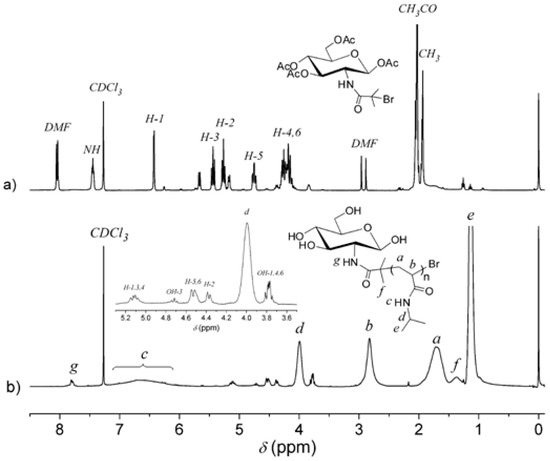 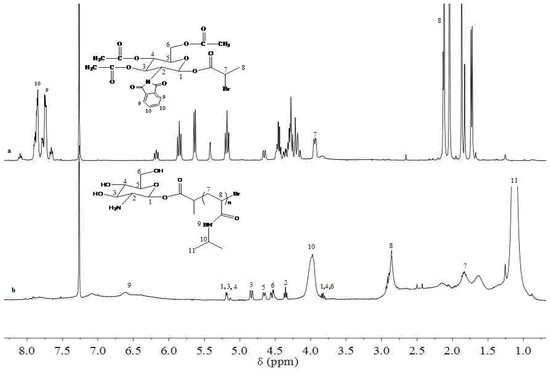 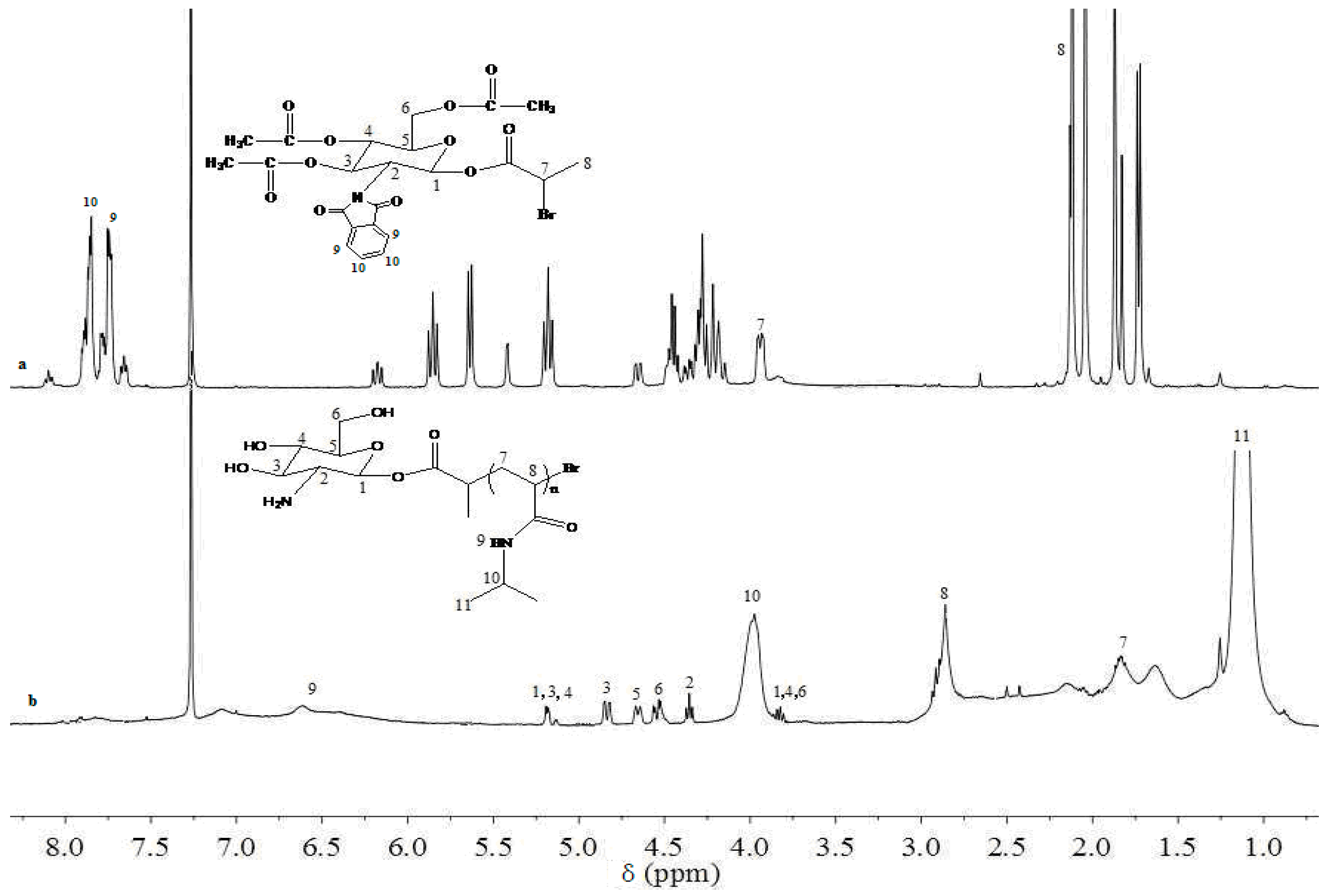 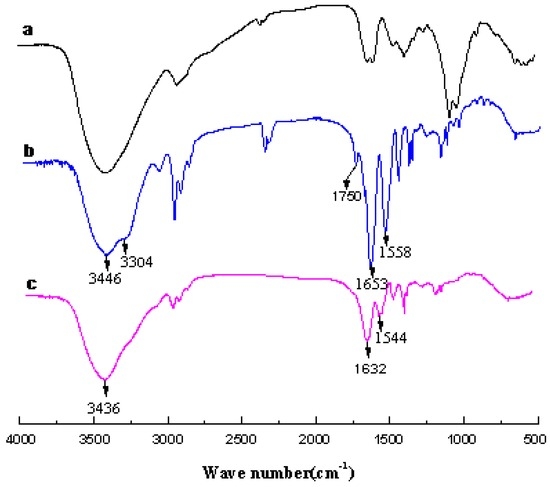 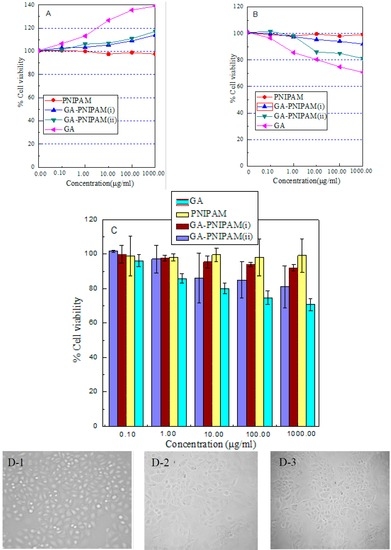 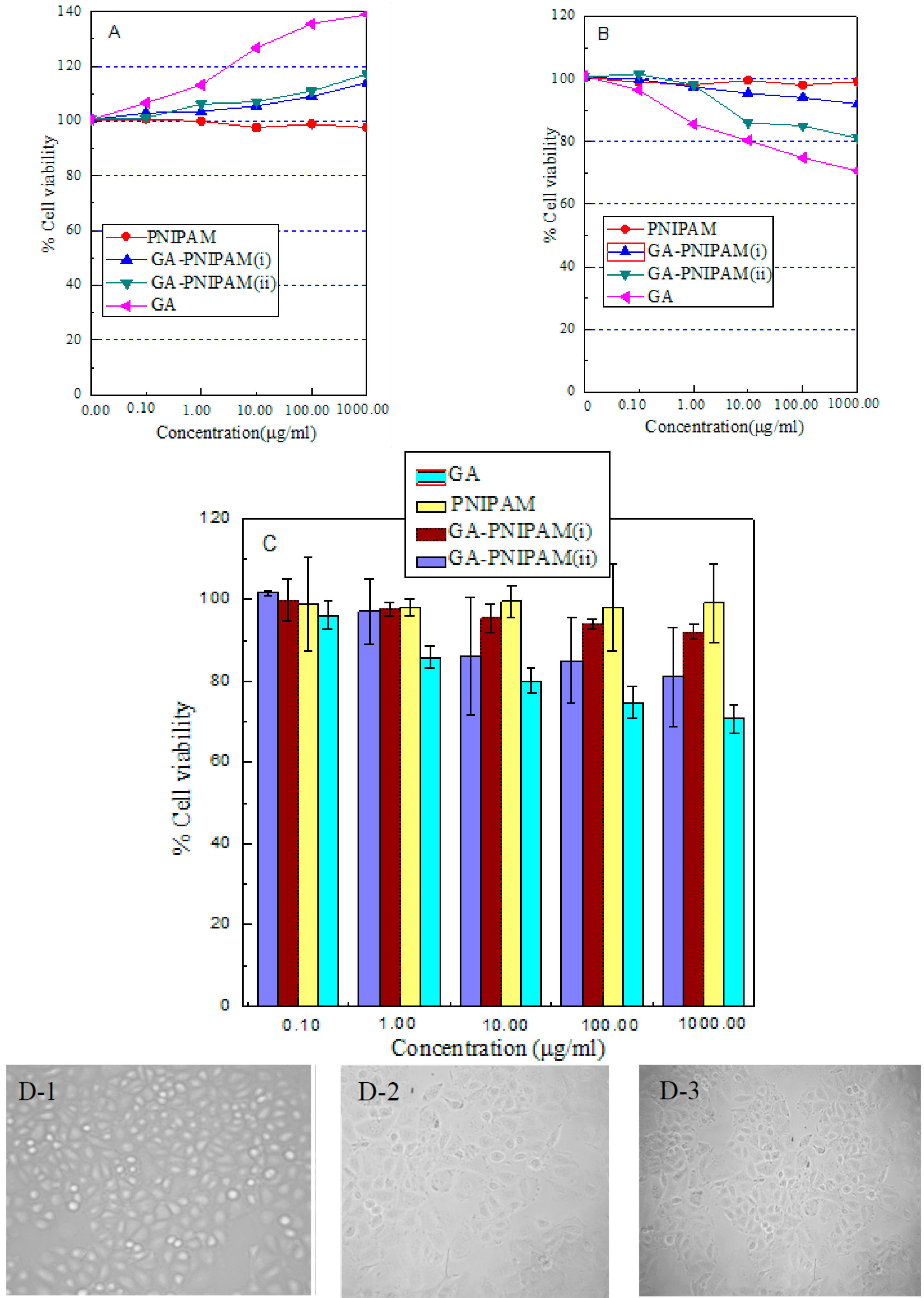 Table 1. Polymerization of GA-PNIPAM (i) and (ii).
a Determined by GPC using polystyrene standards.

Table 2. Characteristics of GA-PNIPAM (i) and (ii).
a Determined by GPC using polystyrene standards.