Dense wavelength division multiplexing (DWDM) is an optical multiplexing technology used to increase the bandwidth over existing fiber networks [1]. DWDM works by combining and transmitting multiple signals simultaneously at different wavelengths on the same fiber [2].
An optical demultiplexer is an important component in optical communication networks that work on DWDM technology. Demultiplexers can be implemented using several techniques, such as Mach-Zehnder interferometers [3], multimode interference (MMI) couplers [4,5,6], and Y-branch devices [7].
A slot-waveguide is a unique structure that enables light to be strongly confined and guided inside a narrow nanometer-scale region of low index material that is surrounded by two layers with high index material [8].
Using this unique structure leads to a variety of advantages such as a small beat length of the guided light and a strong confinement in the slot region that results in extremely low losses. Another benefit is that CMOS compatible materials and technology can be used in slot-waveguide fabrication [9].
A major improvement in the fabrication of semiconductor circuits is the introduction of silicon on insulator (SOI) technology. This technology is characterized by low power consumption, improved heat dissipation, and low-voltage activity. As a result, the performance of semiconductor circuits has improved significantly [10,11].
The principle work of the MMI coupler is that an input field is duplicated in single or multiple images at periodic intervals along the light propagation in the MMI waveguide coupler. This effect is called self-imaging [12,13].
MMI demultiplexers based on slot waveguide structures have been demonstrated to separate two channels with a spacing of 250 nm [14] and four channels with a spacing of 50 nm [15].
The wavelengths, ranging from 1530 to 1565 nm, are the most useful range in optical telecommunication, and it is called the C-band. The main benefit of the C-band is the use of optical amplifiers that allows for the transmission of data over long distances [16].
Gallium nitride (GaN) has some important electrical characteristics including a wide spectral range and a resistance to temperature [17,18]. GaN devices can be grown epitaxially on substrates or can be grown directly on silicon (Si) substrates [19].
Researchers assessed the performance of GaN-based slot-waveguide device and found it suitable for transmitting visible light with 0.1–0.4 (dB/cm) transmission loss [20].
The preliminary fabrication of 1 × 4 power splitter based on MMI in Si-GaN slot waveguide structures has been demonstrated [21], and researchers have recently made an initial demonstration of GaN CMOS field-effect-transistor technology to fabricate a functional inverter integrated circuit [22].
An MMI demultiplexer device based on conventional Si waveguides demonstrated an ability to separate eight channels with a spacing of 5 nm in the C-band [23]. However, the simulation results show low transmission values of 42.6%–57% and a large coupling length size (18 mm) along the z-axis.
Choosing a lower-index material as the slot material lead to a stronger confinement inside the slot area. However, an MMI demultiplexer device with close spacing channels is very sensitive to the variation in the effective refractive index, which can influence the performance and especially the MMI coupler size.
In order to overcome this problem, we chose GaN as a slot material. GaN has a high-index value compared to other materials (alumina or silica (SiO2)) and has a low-index value compared with Si material.
Thus, the MMI demultiplexer device-based Si-GaN slot waveguide is not very sensitive to the variation in the optical signals in the C-band [20] that enable an ability to separate wavelengths in the C-band inside the MMI coupler with improved performance.
In this paper, we present a 1 × 8 wavelength MMI demultiplexer in a slot Si-GaN waveguide structure that divides eight channels in the C-band range with a spacing of 5 nm between channels. The operating wavelengths are: 1530 nm, 1535 nm, 1540 nm, 1545 nm, 1550 nm, 1555 nm, 1560 nm, and 1565 nm. Thus, this device can be very useful for transmitting a wide range of information in DWDM systems.
The device is based on a cascade of seven 1 × 2 MMI couplers, fourteen S-bands, and one input taper. Numerical optimizations were carried out on the MMI coupler parameters and the slot-waveguide structure in order to obtain strong field confinements inside the slot region, a self-image effect, and to find the optimal values of the MMI couplers. The simulations were done using the full vectorial-beam propagation method (FV-BPM) combined with Matlab software.

Figure 1a,b shows a schematic sketch of the 1 × 8 wavelength MMI demultiplexer x–z cross sectional view at y = 0 and 3D view of the MMI coupler. In this figure, the green areas denote pure silicon (Si), purple areas denote GaN, and the white areas denote silica (SiO2). The Si layer height is HSi, and the GaN layer height is Hslot as shown in Figure 1b. It can be seen in Figure 1a that the device is based on seven 1 × 2 MMI couplers, fourteen S-bands, and one input taper. Table 1 shows the refractive index values of Si, GaN, and SiO2 at the operated wavelengths.
The width of the input taper varies from 0.4 µm to 0.6 µm with a length of 60 µm. The width of the output S-band is 0.4 µm and varies from 0.35 µm to 0.4 µm for the left and right outputs in the MMI coupler. The gap distance between the two S-bands at the output MMI coupler is 0.73 µm.
The MMI coupler is based on the self-imaging effect of multimode interference [24,25]. The beat length Lπ is given by [24] λm are the operating wavelengths ( (nm)). The neff (λm) is the effective refractive index of the core (GaN and Si) and is solved by the FV-BPM mode solver. The We,m is the effective width of the MMI couplers; for the transverse magnetic (TM) mode, the We,m is approximated by [24] where WMMI is the width of the MMI coupler as shown in Figure 1b. Its size was optimized in order to minimize the size of the beat length inside the MMI coupler.
In order to obtain the directed or the mirrored image of the entered field at the output coupler, the MMI coupler length needs to be equal to a natural number duplicated with the beat length (Lmmi = pLπ).
The conditions for dividing two different wavelengths in MMI coupler are given by where p is a natural number, and q is an odd number. The conditions for dividing four different wavelengths in MMI coupler are given by
The conditions for dividing eight different wavelengths in MMI coupler are given by
In order to obtain a compact device, the location of the input taper was shifted from the center of Wmmi. This shift can lead to a cancellation of the third mode inside the MMI coupler. In addition, many optimizations were carried to find the optimal values of the seven MMI coupler lengths that satisfied the conditions in Equations (3)–(5).
The crosstalk is given by where Pn is the power transmission for the suitable port, and Pm is the interference power transmission from the other port. The insertion losses are given by where Pout is the power at the output port, and Pin is the power in the input taper.

To summarize, in this paper, we have shown that a 1 × 8 wavelength MMI demultiplexer can be implemented in slot Si-GaN waveguide structures.
Simulation results show that eight wavelengths—1530, 1535, 1540, 1545, 1550, 1555, 1560, and 1565 mm—that belong to the C-band range can be divided after a propagation length of 6.6 mm with insertion losses in the range of 0.9–2.12 dB.
We managed to shorten the coupling distance along the z-axis from 18 mm [23] to 6.6 mm.
The device has low crosstalk (−19.97–−13.77 dB), with a bandwidth range of 1.8–3.6 nm. Therefore, this device can be very useful in optical networking systems that work on DWDM technology.
Although only the demultiplexer configuration is considered in this manuscript, the demultiplexer can also operate as a multiplexer in a reversed direction of the guided light.
Due to the use of the slot Si-GaN waveguide structure, the device has great potential for integration with CMOS technology for the design of a photonic-chip. 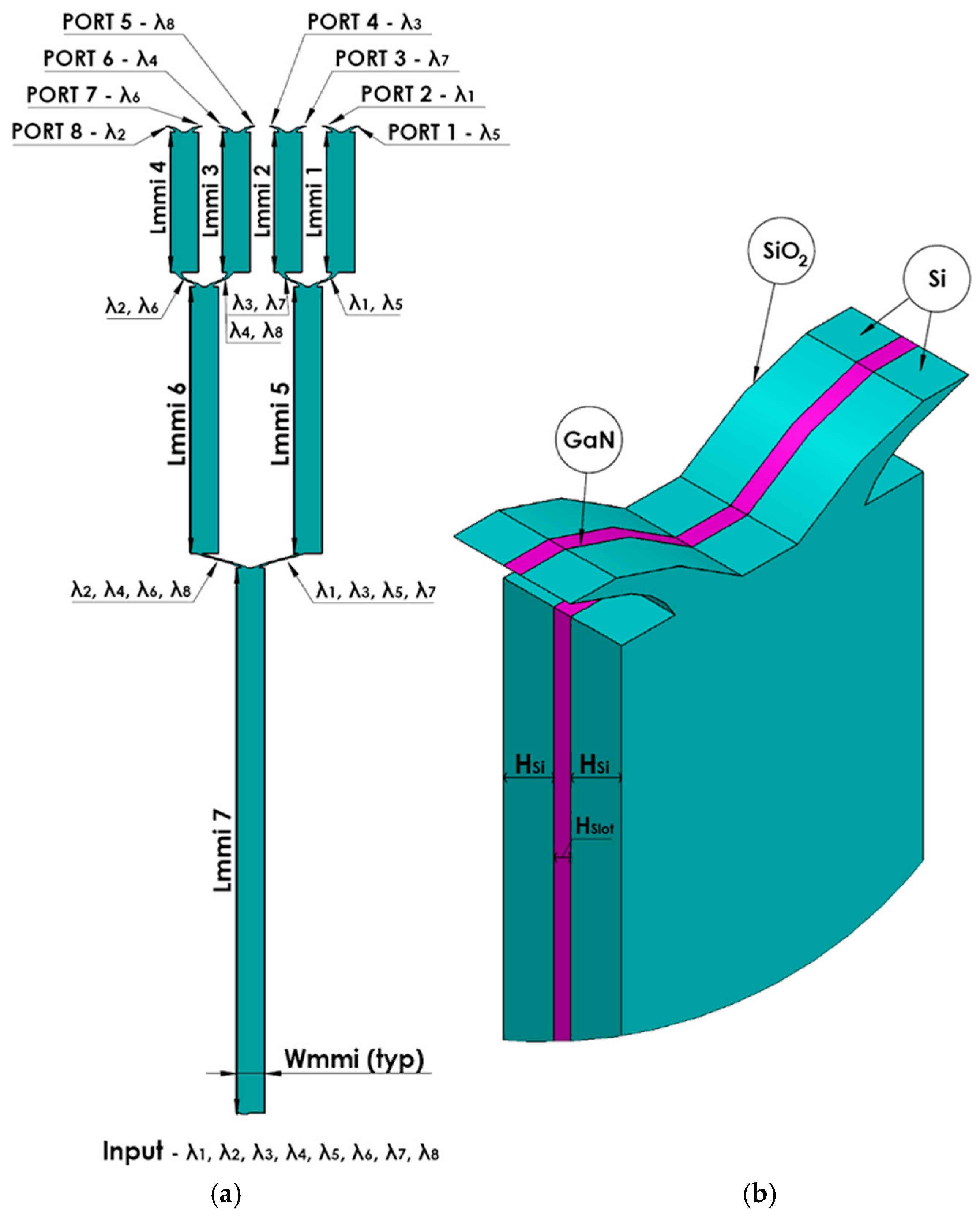 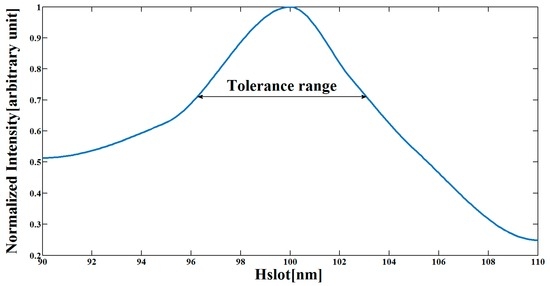 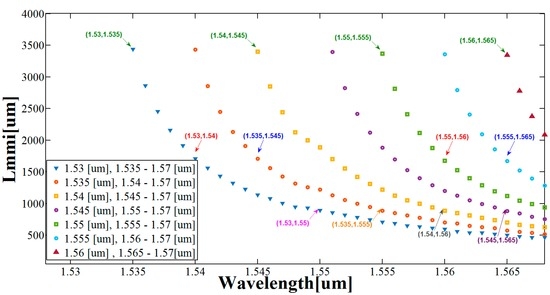 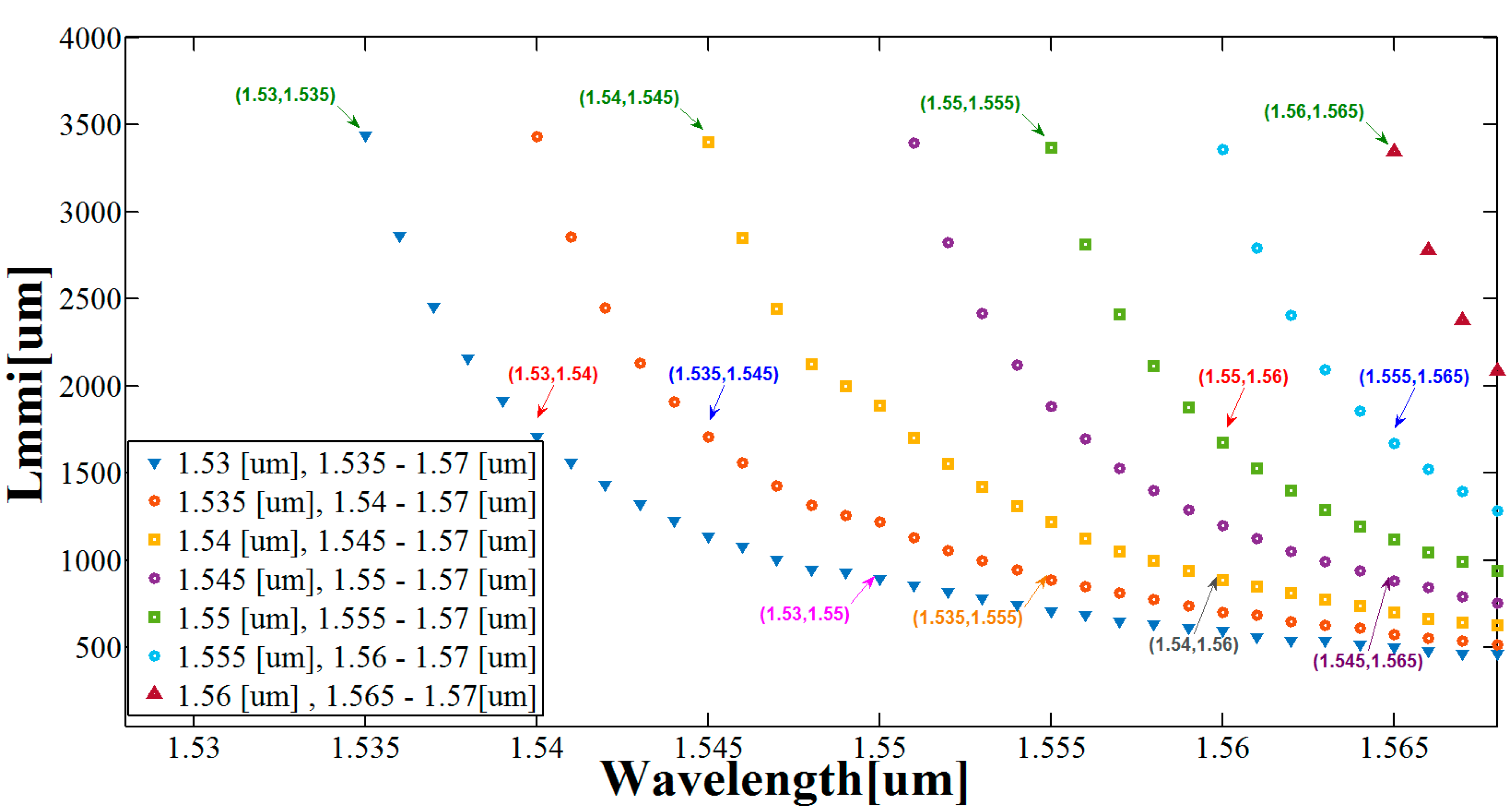 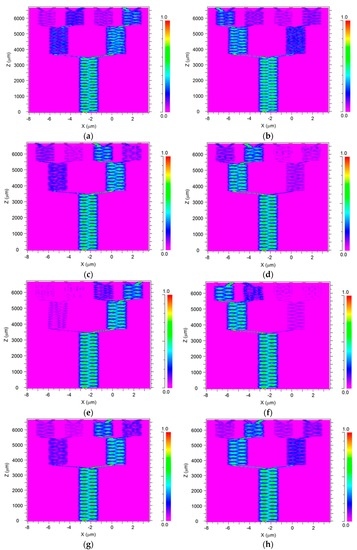 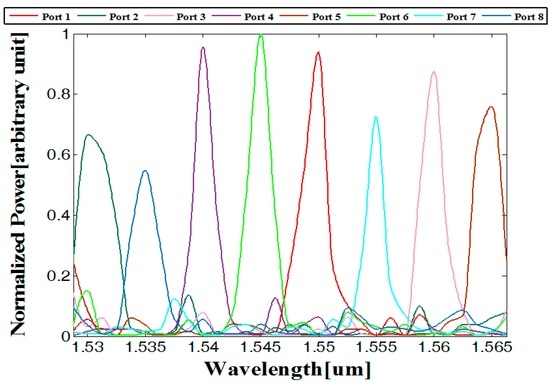 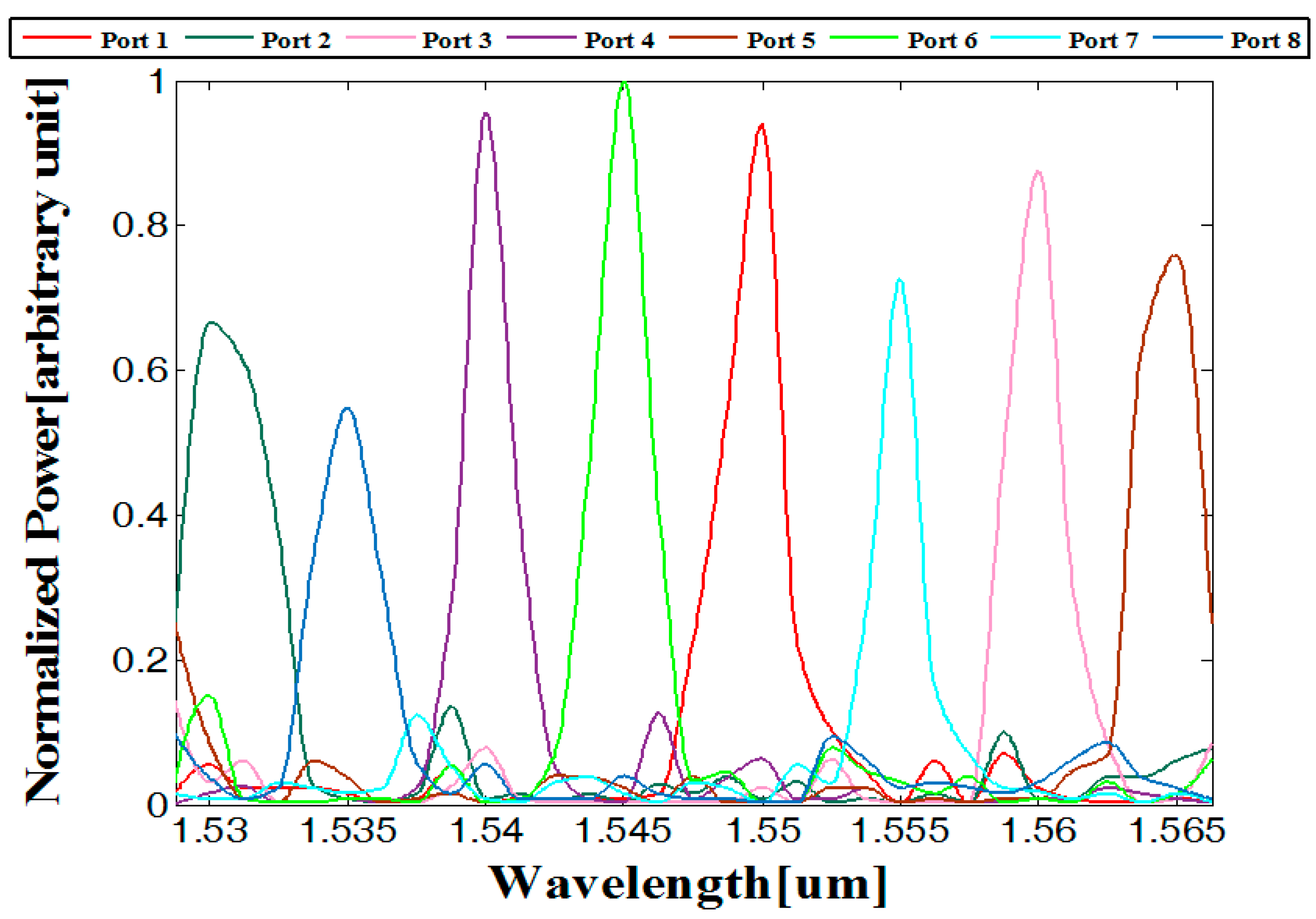 Table 3. Values of the crosstalk, fwhm, and losses for the operated wavelengths.