Zirconia as a Dental Biomaterial
Previous Article in Special Issue

A highly-stable and biocompatible nanoporous electrode is demonstrated herein. The electrode is based on a porous anodic alumina which is conformally coated with an ultra-thin layer of diamond-like carbon. The nanocarbon coating plays an essential role for the chemical stability and biocompatibility of the electrodes; thus, the coated electrodes are ideally suited for biomedical applications. The corrosion resistance of the proposed electrodes was tested under extreme chemical conditions, such as in boiling acidic/alkali environments. The nanostructured morphology and the surface chemistry of the electrodes were maintained after wet/dry chemical corrosion tests. The non-cytotoxicity of the electrodes was tested by standard toxicity tests using mouse fibroblasts and cortical neurons. Furthermore, the cell–electrode interaction of cortical neurons with nanocarbon coated nanoporous anodic alumina was studied in vitro. Cortical neurons were found to attach and spread to the nanocarbon coated electrodes without using additional biomolecules, whilst no cell attachment was observed on the surface of the bare anodic alumina. Neurite growth appeared to be sensitive to nanotopographical features of the electrodes. The proposed electrodes show a great promise for practical applications such as retinal prostheses and bionic implants in general. View Full-Text
Keywords: nanocarbon coating; nanoporous aluminum oxide; diamond-like carbon; chemical resistivity; neural compatibility; bionic devices nanocarbon coating; nanoporous aluminum oxide; diamond-like carbon; chemical resistivity; neural compatibility; bionic devices
►▼ Show Figures 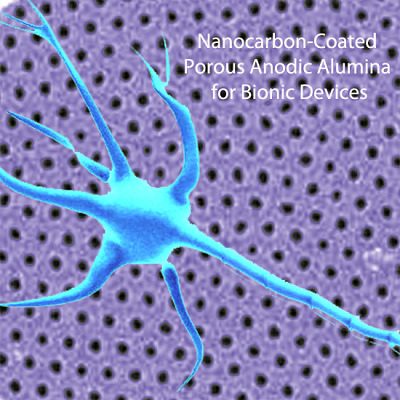