Effect of Beverages on Viscoelastic Properties of Resin-Based Dental Composites

Methods for Biomimetic Mineralisation of Human Enamel: A Systematic Review

Unlike the other mineralised tissues of the human body (i.e., bone, dentine, and cementum), mature enamel is acellular and has more than 95% mineral content and less than 1% organic material, thus, making it the hardest mineralised tissue in the human body [1]. The crystals found in enamel are nanorod-like hydroxyapatite (HAP) crystals with hierarchical levels of the enamel microstructure from the nanoscale to microscale [2]. The highly organised hierarchical microstructure (prism) provides dental enamel its unique strength and anti-abrasive properties [3]. During enamel biomineralisation, ameloblasts secrete proteins, such as amelogenin and ameloblastin, to mediate the crystallites to form the well-organised prism pattern [4]. Although the initial formation of enamel apatite occurs under a protein-rich gel-like matrix environment, the biological macromolecules are almost degraded or removed gradually. This makes mature enamel a non-living tissue. Damaged enamel is permanent and does not remodel. As the outermost layer covering the tooth, enamel is susceptible to dental caries and erosive wear. Traditional treatments replace the defective enamel with dental restorative materials, such as amalgam, composite resin, and ceramics, however, these restorative materials are very different from natural enamel in chemical components, crystal structures, and physicochemical properties. They cannot fit well with enamel at the interface of the enamel, and the restorative materials are at risk of marginal leakage, which leads to hypersensitivity and secondary caries. Therefore, it is of great interest for scientists in different fields to design an alternative strategy to repair defective enamel.
Enamel is relatively stable in a healthy oral environment with the presence of saliva. The demineralisation and remineralisation of enamel are continuously taking place at the tooth-pellicle-plaque-saliva interface [5]. It is well established that dental caries is a dynamic disease process caused by the imbalance between demineralisation and remineralisation [6]. This concept of dental caries provides the scope for remineralising early enamel carious lesions. Recently, various remineralising strategies have been developed to restore early enamel lesions and prevent enamel demineralisation, such as fluoride [7,8], surfactants [9], electrolytic deposition [10], hydrothermal methods [1,10], and hydrogen peroxide [11]. However, these methods are performed under stringent conditions, such as extremely low acidity or high electric field environments, which cannot be translated to clinical applications. Although surfactants, such as reverse micelles, mimic the natural biomineralisation process of enamel by modifying the HAP nanorods to self-assemble into an enamel-like structure, the biocompatibility limits their clinical application [12]. Dental enamel is produced by ameloblasts. Enamel formation is a protein-mediated biomineralisation process that takes place within an extracellular matrix [4,13,14]. Amelogenin is the major component of this matrix and it is essential for proper enamel biomineralisation [15]. Biomimetic mineralisation is a methodology that imitates the natural process of mineralisation [16]. It is generally accepted that the biomimetic synthesis of enamel-like apatite structures under a physiological condition is an alternative restorative pathway. This paper is a systematic review of the methods that successfully achieved the biomimetic mineralisation of demineralised human enamel.

The initial search from three electronic databases identified 2291 potential articles (294 in PubMed, 1567 in ScienceDirect, and 430 in ISI Web of Science), 2271 were excluded after the initial screening of titles and abstracts. After retrieving the full text of the remaining 20 articles, eight articles were found from the bibliographies of the included articles. Therefore, 28 articles were included in the systematic review (Figure 1). All 28 articles were in vitro studies published (including those Epub ahead of print) between 1997 and 2014. 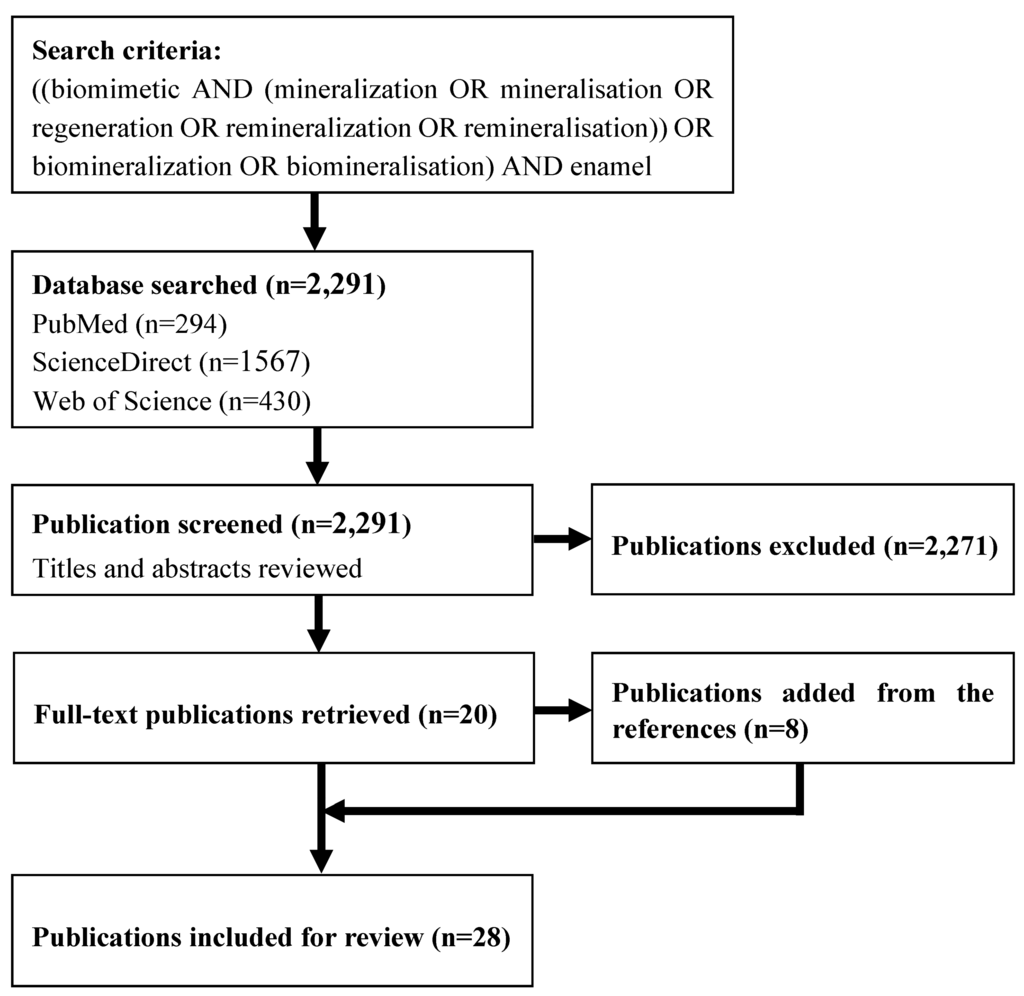 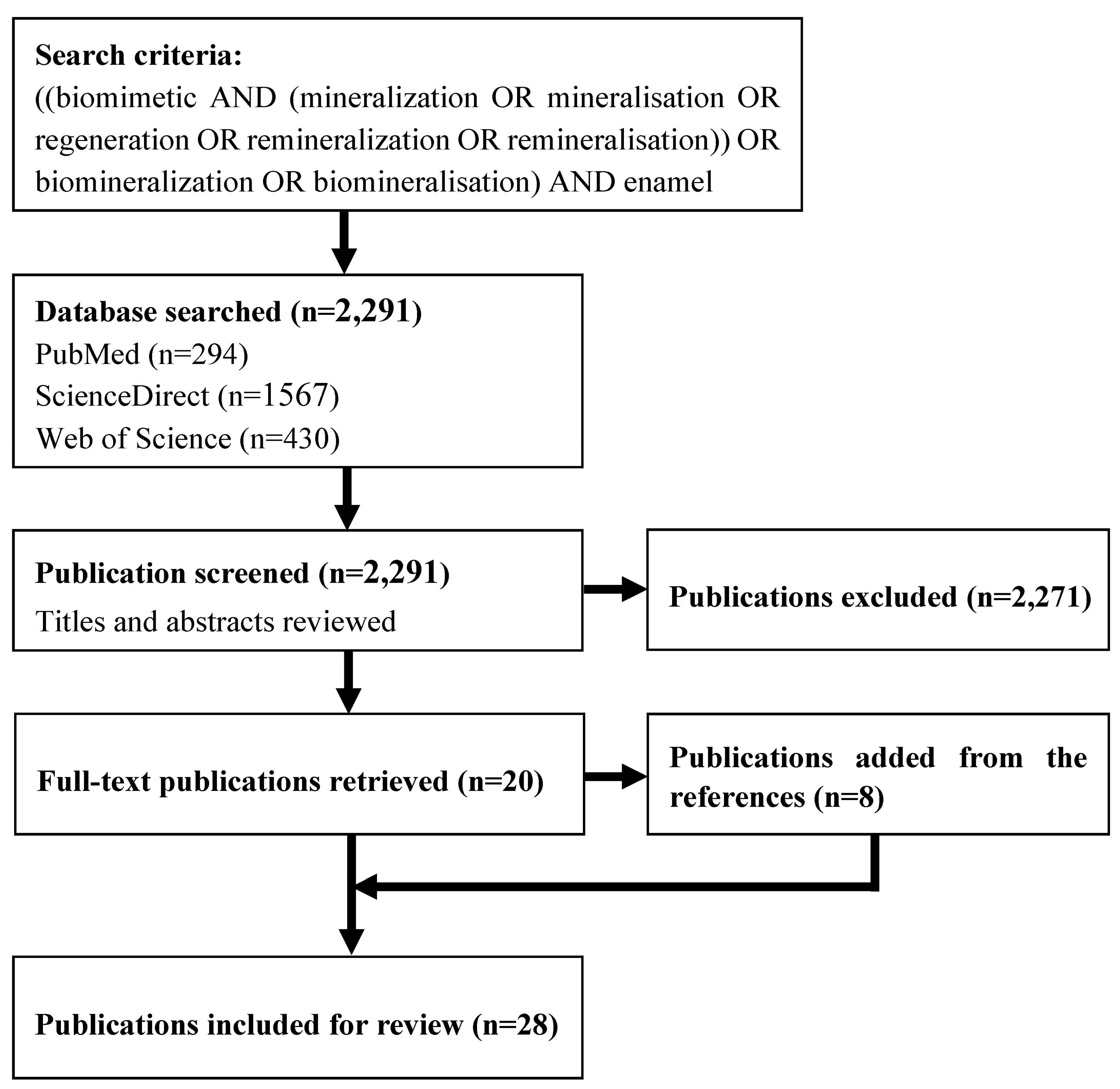 Table 1 summarised the different methods of biomimetic mineralisation of enamel used in the included articles. Protein or protein analogues were used to mimic the function of natural proteins for the biomimetic mineralisation of enamel in 23 studies. Two studies used bioactive components inspired by mussel as a template to facilitate the hydroxyapatite nucleation on enamel [17,18]. A study constructed an agarose hydrogel model for the biomimetic mineralisation of enamel [19]. A study developed a glycerine-enriched gelatine technique to form fluorapatite layers on enamel [20]. A study used ethylenediaminetetraacetic acid (EDTA) as the mediating agent to reconstruct fluoride hydroxyapatite on enamel [21].
Mineral ions were provided by different remineralising mediums in the included articles. The most commonly used remineralising medium was artificial saliva. In addition, simulated body fluid (SBF), calcium phosphate remineralising solution/hydrogel, apatite nanocrystals slurry, bioactive glass slurry, and human saliva were also used. Fluoride at different concentrations was added in the remineralising mediums in 15 studies. The highest concentration of fluoride was 1100 ppm and the lowest concentration was 0.45 ppm.
Different demineralising agents were used to treat enamel surface before biomimetic mineralisation. Phosphoric acid at concentration from 30% to 37% was used in 17 studies. In addition, a demineralising solution [22,23,24,25,26], citric acid [27], nitric acid [28,29,30], acidified gelatine gel [31], and a bi-layer demineralisation protocol of methylcellulose gel buffered with a lactic acid layer [32] were also used. In fact, the different demineralization agents are used to create two different models of enamel defects. The strong acid (phosphoric acid or nitric acid) is used to create an erosive lesion, while the demineralising solutions (or some gels) usually with pH of ~4.6 are used to generate artificial caries. These studies can regenerate enamel-like crystals on the enamel surface, and the main findings can be found in Table 1.
The functions of the proteins or protein analogues are summarised in Table 2. Amelogenin was added into a calcium phosphate solution containing fluoride [28,29] or mixed with hydrogel containing calcium and phosphate [26,33,34] to promote the orderly enamel-like structure formation. In one study, an enamel matrix derivative was mixed with calcium chloride agarose hydrogel to guide the continuous growth of crystals, prevent the crystal fusion of premature crystals, and control the nucleation and growth of the enamel prism-like crystals [35]. A polyamidoamine (PAMAM) dendrimer solution was applied to the etched enamel surface to provide nucleation sites and a mineralisation template for nanorod-like HAP formation with high uniformity [30,36,37]. Peptide was the most commonly used protein analogue. The sequence of the different peptides used in the included articles was summarised in Table 2. Only one study added peptide into a calcium phosphate solution containing fluoride to induce the formation of stable amorphous calcium phosphate (ACP) nano-precursors and prevent them from aggregation and precipitation [38]. In the other seven studies, a peptide solution was applied to the etched enamel surface to bind with the HAP surface, capture calcium and phosphate ions from artificial saliva, and promote HAP with a small average crystalline size [27,31,39,40,41,42,43]. Glutamic acid (Glu) was added into SBF to induce nano-apatite particle assembly and aggregation on the etched enamel surface, resulting in the regeneration of the enamel-like structure [44]. Polyacrylic acid (PAA) was added to bioactive glass and applied to the etched enamel surface to promote the oriented bundle formation, release Ca and P ions to form an ACP layer, and act as a reservoir of ions available for remineralisation [32]. The nano-complexes of the phosphorylated chitosan-ACP solution were applied to the etched enamel surface to act as the aggregates of prenucleation clusters, to provide stable ACP, and to adsorb on the enamel surface [25]. Etched enamel was incubated with a casein phosphopeptide-amorphous calcium phosphate (CPP-ACP) solution [22], coated with CPP-ACP paste [23], or brushed with CPP-ACP paste [24] to act as a calcium and phosphate reservoir and promote enamel subsurface lesion remineralisation.

Three electronic databases (PubMed, ScienceDirect, and ISI Web of Science) were systematically searched to identify publications before 1 January 2015. The keywords used were: ((biomimetic AND (mineralization OR mineralisation OR regeneration OR remineralization OR remineralisation)) OR biomineralization OR biomineralisation) AND enamel. No publication year or language limit was used. The titles and abstracts of identified articles were independently reviewed by two authors. Duplicated articles were removed. Clinical trials, reviews, non-English articles, animal teeth, non-tooth substrates, and irrelevant studies were excluded. The articles were further reviewed with full-texts if the articles met the inclusion criteria (biomimetic mineralisation methods for demineralised human enamel in vitro). Manual screening was conducted on the reference lists of all included articles to identify relevant articles. Disagreements about the inclusion or exclusion of a study were discussed with a third author for a final decision. Data extraction was conducted by one author from full-texts and evaluated by another one. Similar information mentioned in the included articles was summarised (such as protein and protein analogues).

Many studies with different methods reported success in the biomimetic mineralisation of enamel, including the use of protein and protein analogues, bioactive materials or components, an agarose hydrogel model, a glycerine-enriched gelatine technique, and ethylenediaminetetraacetic acid.

This work was supported by the General Research Fund (HKU 760413M).