The practical use of recycled concrete aggregate produced by crushing concrete waste reduces the consumption of natural aggregate as well as the amount of concrete waste that ends up in landfills. The crushing of concrete waste produces coarse recycled concrete aggregate (CRCA) and fine recycled concrete aggregate (FRCA), as defined by particle size. A number of studies [1,2,3,4,5,6,7,8,9,10,11] have shown that CRCA can be used as a replacement for coarse natural aggregate in structural concrete; however, relatively little research has been conducted on the application of FRCA in structural concrete [11,12,13,14,15].
Several studies [11,12,13,14,15,16,17,18,19] have used laboratory crushers for the crushing concrete of waste to produce FRCA. Test results of these materials reveal that the FRCA produced using this crushing process leaves a large amount of cement paste attached to the surface of FRCA, which can have a detrimental effect on the material properties. Thus, researchers have shifted their attention to the influence of production process on the properties of the resulting FRCA.
Lee [20] investigated two discrete crushing processes using a jaw crusher and an impact crusher to obtain two types of FRCA: RF-A and RF-B, with specific gravity values of 2.39 and 2.28 and water absorption of 6.59% and 10.35%, respectively. Various quantities of fine natural aggregate (FNA) were then replaced with the two types of FRCA, whereupon the resulting mortars were tested. The mortar in which FNA was replaced entirely by RF-A presented higher density and greater compressive strength than did the samples made entirely with RF-B. These results also indicate that the water absorption of FRCA influences the properties of the mortar, particularly at higher replacement ratios.
Sim and Park [21] applied advanced recycling methods to the production of FRCA with a specific gravity of 2.28 and water absorption of 6.45%. They replaced various proportions of FNA with FRCA and tested the resulting concrete specimens. Compressive strength was shown to decline with an increase in the replacement ratio of FRCA. When the replacement ratio reached 100%, the compressive strength of the mortar at 28 days was approximately 33% lower than that of the original samples and all specimens with over 60% FNA replacement presented a significant drop in compressive strength.
Florea and Brouwers [22] investigated the influence of concrete crushing method on the particle size distribution and density of recycled concrete aggregate (RCA). As a standard, they adopted concrete with compressive strength of 60 MPa at 91 days, to which they applied three methods for the crushing of concrete: (1) RC-1 refers to RCA from concrete waste that was passed through a jaw crusher just once before being screened; (2) RC-2 refers to RCA that passed through a jaw crusher ten times before being screened; and (3) RC-3 refers to RCA produced from three consecutive crushing processes using the Smart Crusher SC 1, designed specifically for concrete waste. RC-3 presented the optimal particle size distribution, between 125 μm and 200 μm, with a density of 2.50 g/cm3, which increased with the size of the particles. RC-3 particles between 2 mm and 4 mm in size had a density of 2.61 g/cm3. They concluded that optimizing the crushing method could enhance the quality of the resulting RCA.
Ulsen et al. [23] produced a variety of FRCAs by crushing recycled aggregates smaller than 19 mm using a jaw crusher in conjunction with a vertical shaft impact (VSI) crusher at various rotational speeds: (1) CDW-sand refers to FRCA produced using a jaw crusher prior to screening; (2) VSI-55 refers to FRCA produced using a jaw crusher followed by a VSI crusher at 55 m/s prior to screening; (3) VSI-65 refers to FRCA produced using a jaw crusher followed by a VSI crusher at 65 m/s prior to screening; and (4) VSI-75 refers to FRCA produced using a jaw crusher followed by a VSI crusher at 75 m/s prior to screening. Their results indicate that the rotational speed of the VSI crusher had no effect on the particle shape or particle size distribution of the FRCA; however, it did affect water absorption and porosity. The water absorption of CDW-sand, VSI-55, VSI-65, and VSI-75 were 12%, 9%, 8.1%, and 7%, respectively, whereas the porosity percentages were 11.9%, 6.9%, 5%, and 6%, respectively.
Song and Ryou [24] introduced a washing stage to the production of FRCA using a combination of chemical and physical processes. The washing process had the following effects: water absorption dropped from 5.8% to 1.92%; the ratio of absolute volume increased from 62.3% to 65.1%; and impurity content dropped from 0.46 to 0.18%. Clearly, this washing process can enhance the physical properties of the resulting FRCA.
Koshiro and Ichise [25] employed a heat grinder system for the processing of concrete waste from a demolished building, which resulted in FRCA with density of 2.57 g/cm3 and water absorption of 2.52%. Their results demonstrate the efficacy of heat grinder systems in the production of high-quality FRCA suitable for the structure of new buildings.
Clearly, the methods used in the processing of concrete waste influence the quality of the resulting FRCA. Most previous studies have obtained FRCA produced under laboratory conditions or using the methods typically employed in large-scale recycling facilities, in which CRCA and FRCA are produced simultaneously. In this study, we obtained FRCA from a recycling facility in Yilan, Taiwan, which using a crushing process that produces only fine recycled concrete aggregate. We then prepared and tested specimens using a variety of mix proportions to determine the influence of production process and FRCA proportion on the properties of the resulting mortar, which is a constituent of concrete.

This study employed Type I Portland cement and FNA comprising clay slate and river sand, which was processed in a gravel plant. Figure 1 presents the particle size distribution of the FNA and Table 1 lists the basic physical properties.

Table 1. Physical properties of FNA, R1 and R2.
Figure 2 illustrates two processes commonly used for the production of fine recycled concrete aggregate. The first process produces coarse and fine aggregates simultaneously by crushing waste concrete with a large jaw crusher and then separating the resulting aggregate using a vibrating screen. Aggregate larger than 19 mm in diameter is sent through two cone crushers, after which the product is separated using a vibrating screen. Aggregate between 4.75 mm and 19 mm is transported to a coarse aggregate stockpile area. Aggregate smaller than 4.75 mm is sent to a roller sand washer to wash away sludge smaller than 150 μm. The resulting product is fine aggregate (ranging in size from 150 μm to 4.75 mm), which is stored in a fine aggregate stockpile area. The FRCA produced by this process is denoted as R1, the properties or which are presented in Figure 1 and Table 1. 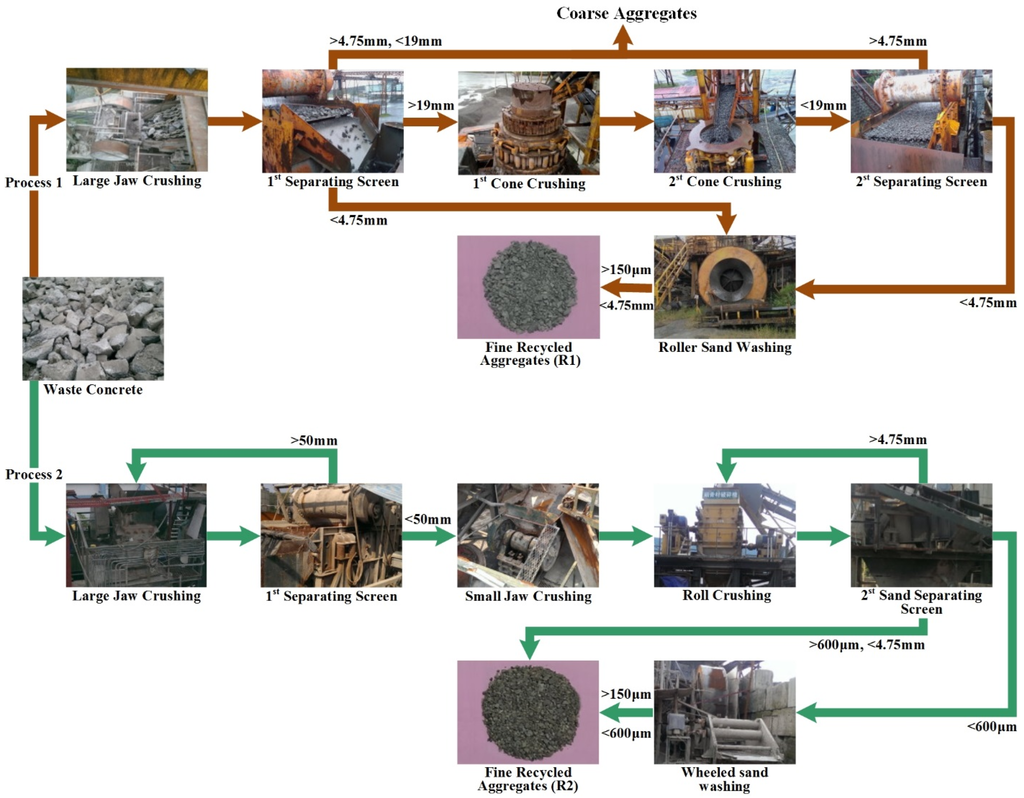 The other method employed in this study produces only fine aggregate using multiple processes. Concrete waste first undergoes crushing in a large jaw crusher, whereupon the resulting aggregate is separated using a vibrating screen. Fragments exceeding 50 mm are sent back to the large jaw crusher to undergo repeated crushing, and this cycle is repeated until all of the aggregate is less than 50 mm. The resulting material is then crushed using a small jaw crusher and a roll crusher and separated using a vibrating screen. Aggregate larger than 4.75 mm is returned to the roll crusher until it is all smaller than 4.75 mm. Aggregate between 600 μm and 4.75 mm is sent to a fine aggregate stockpile; whereas aggregate smaller than 600 μm is sent to a wheeled sand washer for the removal of sludge smaller than 150 μm. The remaining aggregate between 150 μm and 600 μm is sent to the fine aggregate stockpile. The second type of FRCA produced using the above-mentioned process is denoted as R2, the basic properties of which are also presented in Figure 1 and Table 1.

Table 2 presents the mix proportions adopted for the mortar in this study. The water/cement ratios were set at 0.35 and 0.55; however, the mortar from the former mix displayed poor flowability; thus a superplasticizer (0.5% of the weight of the cement) was added to increase flowability. The replacement level of FNA by R1 and R2 were set at volume fraction of 0%, 25%, 50%, and 100%. As shown in Table 2, the weight ratio for cement and FNA in the control groups is 1:2. Because the densities of R1 and R2 are different from that of FNA, the weights of R1 and R2 in other groups are different from that of FNA used in the control groups, as shown in Table 2.

The FRCA used in this study presents a higher water absorption than does FNA. We therefore applied pre-wetting to R1 and R2 sample for 24 h. We then adjusted the measurement of surface moisture (ASTM C70-13 [29]) prior to mixing in order to achieve saturated-surface-dry (SSD) conditions using the water compensation method. Mixing was performed according to set proportions and the resulting mortar for each mixture was used to produce the following: six cylindrical specimens with a diameter of 100 mm and height of 50 mm, three cylindrical specimens with a diameter of 100 mm and height of 200 mm, four 285 × 25 × 25 mm prismatic specimens, and nine 50 × 50 × 50 mm cubic specimens. After casting, the specimens were covered with plastic sheeting to prevent evaporation. The samples stood in the laboratory for 24 h before being de-molded and held in saturated lime water for curing at a mean temperature of 23 ± 2 °C until the time of testing.

Figure 1 presents the particle size distribution curves for FNA, R1, and R2, as well as the distribution range deemed acceptable in ASTM C33-13 [26]. The particle size distribution curves of all samples fell within the acceptable range. R1 was produced in a single stage crushing process and R2 was produced using multi-stage crushing. Thus, R2 contains a larger quantity of finer particles, which places the particle size distribution curve of R2 above that of R1.
Figure 3 illustrates the appearance of FNA, R1, and R2. Clearly, particles in R1 are rougher in shape and more angular than those in R2 as well as more grayish in color. The difference in shape can be attributed to the repeated crushing and lack of coarse aggregate in the production of R2, such that it contains a higher percentage of fine aggregate. With regard to color, both materials were produced from concrete waste and thus had cement paste adhered to the larger fragments, as shown in Figure 4. We can therefore assume that the difference in color is due to a higher percentage of cement paste in R1 (more grayish in color) than that found in R2. 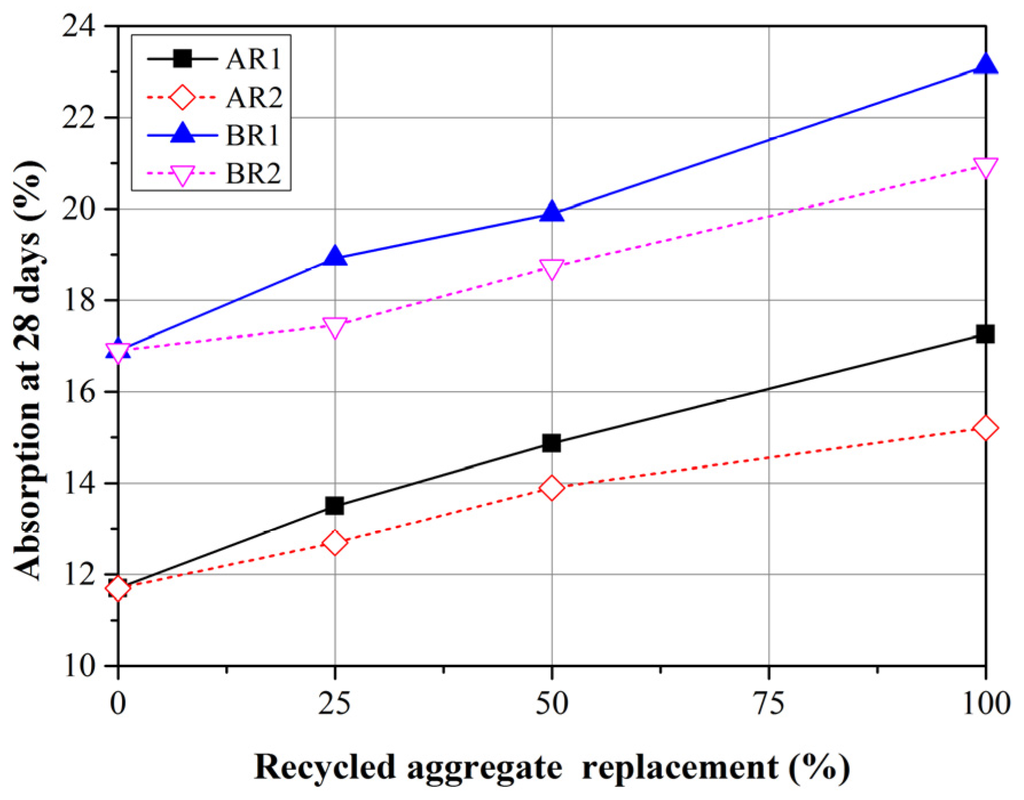 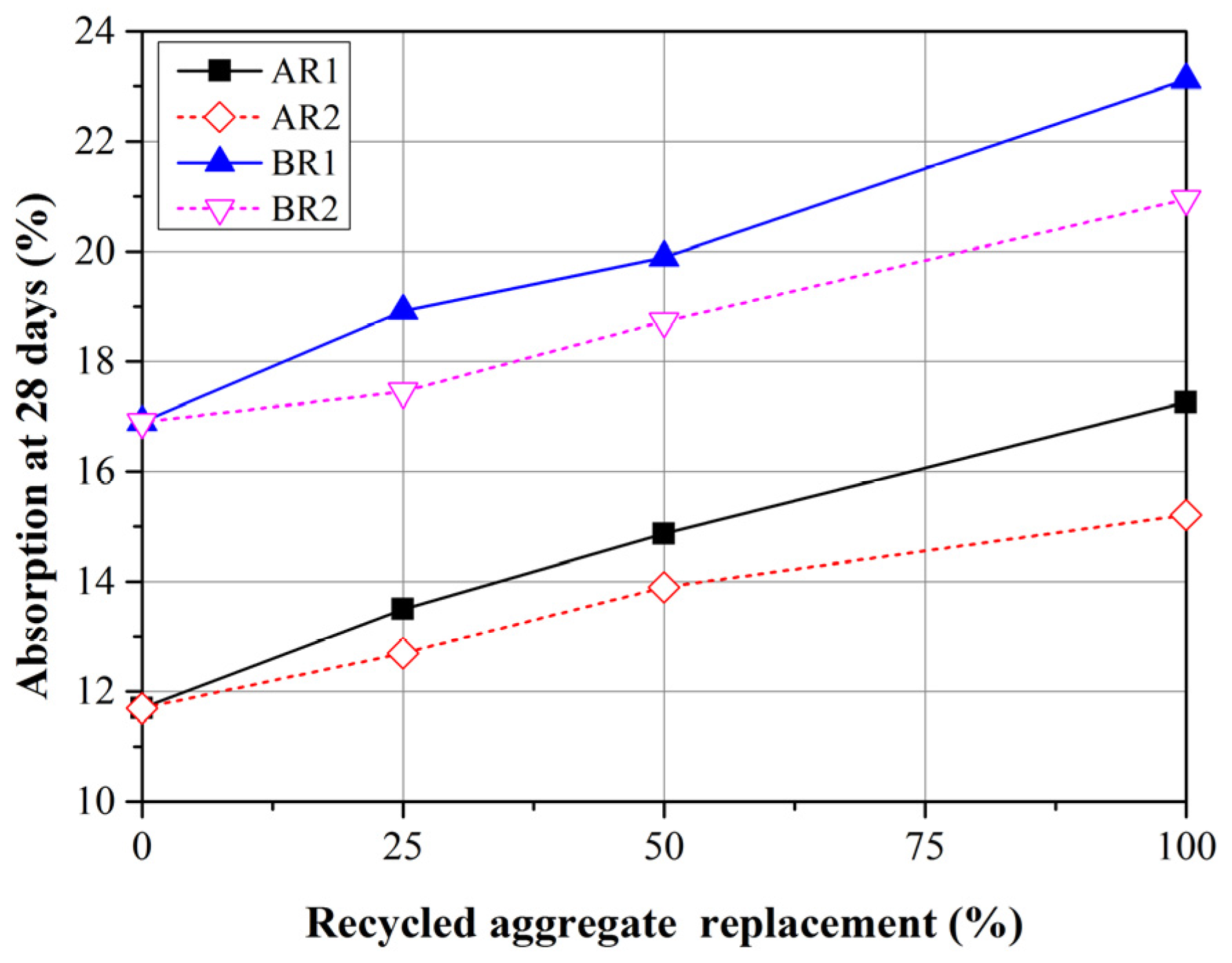 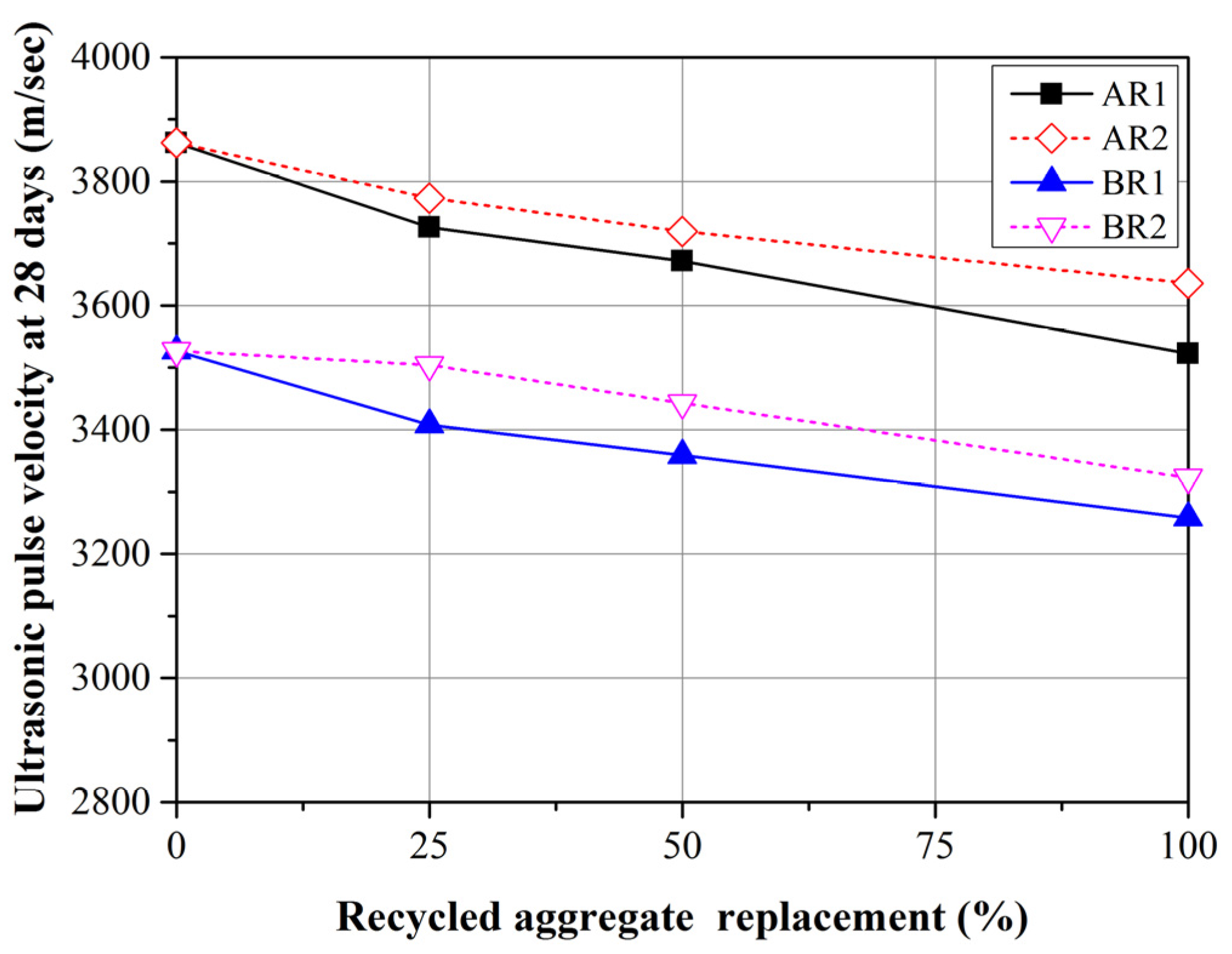 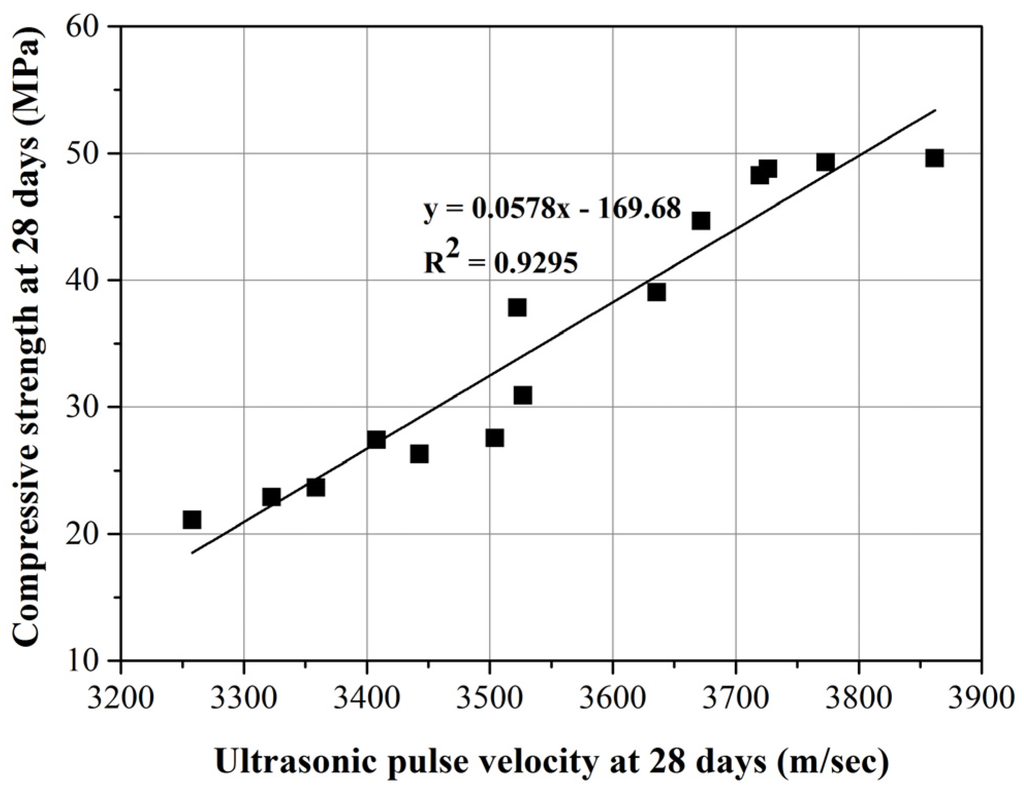 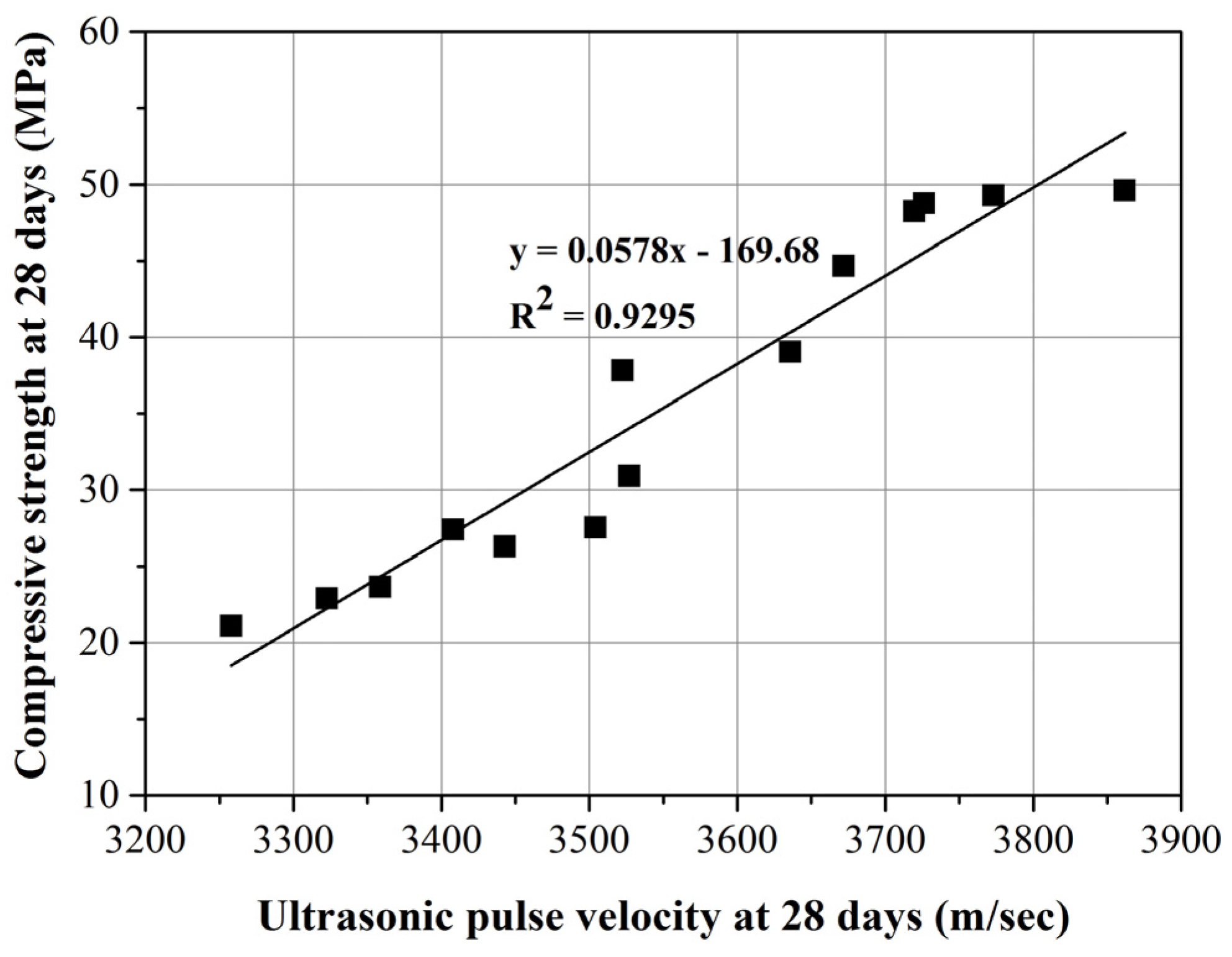 This study investigated the use of two types of fine recycled concrete aggregate (R1 and R2) obtained using different production processes at a recycling facility in Yilan, Taiwan. R1 was produced using a process that simultaneously produces coarse as well as fine aggregate by crushing concrete waste with a large jaw crusher. R2 was produced using a process that produces only fine aggregate through repeated crushing of concrete waste. We then tested mortar specimens in which various proportions of FRCA were substituted for FNA. This led to the following conclusions: