Active Nanomaterials to Meet the Challenge of Dental Pulp Regeneration

Nowadays the waste from protein fibres represents an important renewable source for a new generation of biomaterials and promising competitors for carbohydrate based biomaterials. Regenerated keratin biomaterials are biodegradable in vivo and in vitro, biocompatible, and support cell attachment and proliferation; however, their major drawback has been their weak mechanical properties such as ductility. The following study was conducted in an attempt to improve the ductility of reconstituted keratin films obtained from Australian merino wool fibres. Keratin was extracted from wool fibres according to an established protocol proposed by Yamauchi, and then dialyzed and desalted by multiple diafiltration wash cycles. The resulting keratin film was transparent, biodegradable, and, opposite to its predecessors, mechanically durable, possessing a Young modulus about 12.5 MPa with 35% extensibility. The polypeptide chains were found to rearrange themselves in the β-sheet state in this keratin film, which was shown to be semi-crystalline. This film, unlike its predecessors, did not support human cell proliferation. These properties of the diafiltered keratin film have led us to think that diafiltration resulted in producing a totally new keratin film, which is envisaged to find applications in various areas. View Full-Text
Keywords: recycling; keratin; biodegradability; mechanical properties; cell attachment recycling; keratin; biodegradability; mechanical properties; cell attachment
►▼ Show Figures 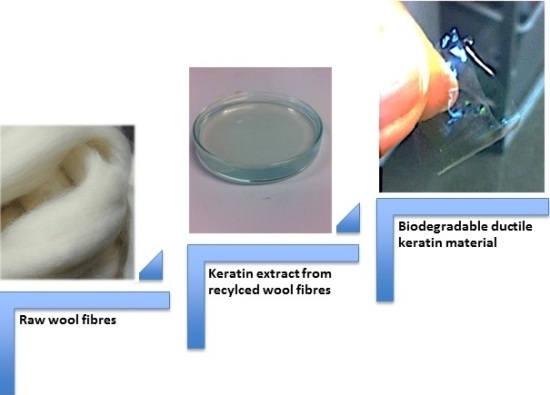