The sol-gel technique was used to prepare epoxy/silica nano-hybrids. The thermal characteristics, curing kinetics and structure of epoxy/silica nano-hybrids were studied using differential scanning calorimetry (DSC), 29Si nuclear magnetic resonance (NMR) and transmission electron microscopy (TEM). To improve the compatibility between the organic and inorganic phases, a coupling agent was used to modify the diglycidyl ether of bisphenol A (DGEBA) epoxy. The sol-gel technique enables the silica to be successfully incorporated into the network of the hybrids, increasing the thermal stability and improving the mechanical properties of the prepared epoxy/silica nano-hybrids. An autocatalytic mechanism of the epoxy/SiO2 nanocomposites was observed. The low reaction rate of epoxy in the nanocomposites is caused by the steric hindrance in the network of hybrids that arises from the consuming of epoxide group in the network of hybrids by the silica. In the nanocomposites, the nano-scale silica particles had an average size of approximately 35 nm, and the particles were well dispersed in the epoxy matrix, according to the TEM images. View Full-Text
Keywords: sol-gel technique; nanocomposite; differential scanning calorimetry (DSC); autocatalytic mechanism sol-gel technique; nanocomposite; differential scanning calorimetry (DSC); autocatalytic mechanism
►▼ Show Figures 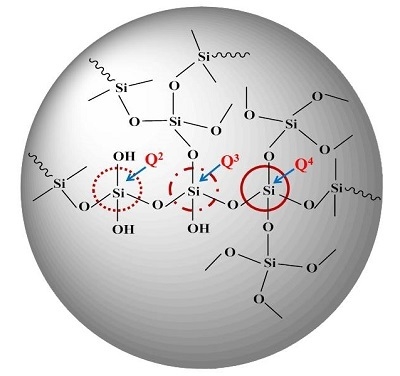