The use of semiconducting materials in environmental decontamination as photocatalysts has attracted a great deal of attention in recent years [1]. When semiconducting materials are exposed to light with energy larger than their band gaps, electron-hole pairs can be created, which can initiate photocatalytic reactions [2]. Most photocatalytic systems are based on TiO2, which is chemically stable and has a long life-time of electron-hole pairs generated by optical excitation. However, the band gap of TiO2 is ~3.2 eV, which is in the ultraviolet regime, and therefore, visible light, which comprises most of the solar light, cannot be absorbed by TiO2 [3]. To overcome this problem, some strategies have been investigated, including noble metal deposition, the doping of metal or nonmetal ions, mixing with another metal oxide, surface photosensitization with dye and preparing composites with a conducting polymer [4–6]. Conducting polymers have attracted considerable attention, because of their interesting semiconducting, electronic and optical properties [7]. Among conducting polymers, polyaniline and polythiophene are widely used for the fabricating of conducting polymer/TiO2 hybrid materials [8,9]. Polythiophene and its derivatives show many advantages in combining with TiO2, and the large internal interface area in the polythiophene/TiO2 composite enables an efficient separation of charge, which is very important for photovoltaic application [10,11]. At the present time, numbers of reports have been published on the preparation of polythiophene and its derivatives/TiO2 composites, including original in situ photopolymerization [12], electrochemical polymerization [13] and the chemical solution method [14]. Although polythiophene has become the focus of considerable interest, polythiophene suffers from the occurrence of undesired α,β- and β,β’-couplings during polymerization, which deteriorate their electronic and optical properties [15,16]. As derivatives of polythiophene, polyterthiophene-type conjugated polymers have rapidly gained considerable attention, due to the preexistence of α,α’-linkages in their monomers, which makes the whole polyterthiophene-type chain grow regularly and leads to very interesting electronic, electrochromic and optical properties [17–19]. Additionally, they can be prepared by electrochemical and chemical methods. Recently, we have demonstrated a novel room-temperature solid-state oxidative method for the polymerization of ethylenedioxy-substituted terthiophene, and we have found that solid-state polymerization was an effective method for the polymerization of the terthiophene-type monomer [20].

The UV-Vis spectra of solid-state synthesized PProDOT/TiO2, PProDOT-Me2/TiO2, poly(TPT)/TiO2 and poly(TMPT)/TiO2 in N-methylpyrrolidone(NMP) are shown in Figure 2. As shown in Figure 2, PProDOT/TiO2 displays a broad peak raging from ~430 nm to 610 nm with several shoulders at ~430, ~450, ~500, ~560 and ~610 nm, while the PProDOT-Me2/TiO2, poly(TPT)/TiO2 and poly(TMPT)/TiO2 display relatively sharp peaks raging from ~460 nm to ~610 nm with several shoulders at ~460, ~500, ~554 and ~610 nm. The absorption peaks and shoulders at ~430–560 nm are assigned to the π → π* transition of the thiophene ring [30–33], while the peaks at ~610 nm are the p-doping peaks of the polythiophene molecular chains [34]. Comparing with the absorption spectra of others, more shoulders appear in the PProDOT/TiO2 nanocomposite, which can be considered as the absorption peaks arising from conjugated segments having different conjugation lengths [35]. Furthermore, the peak of the PProDOT-Me2/TiO2 nanocomposite at ~500 nm is red shifted to ~523 nm in the poly(TMPT)/TiO2 nanocomposite. Generally, the red shift of the absorption spectrum shows the increase of the conjugated chain length [36]. Moreover, the peak of poly(TPT)/TiO2 appears at a relatively lower wavelength compared to the poly(TMPT)/TiO2, which is mostly originated from the strong interaction between the TiO2 particles and the poly(TMPT) [37].

Figure 3 shows the XRD patterns of solid-state synthesized PProDOT/TiO2, PProDOT-Me2/TiO2, poly(TPT)/TiO2, poly(TMPT)/TiO2 and nano-TiO2, respectively. As seen from Figure 3, the composites possess rather broad diffraction peaks, suggesting a small degree of crystallinity, but an amorphous structure, which is similar to other thiophene derivatives [38], and its diffraction peaks are located at about 2θ ~ 24.4° (associated with the intermolecular π → π* stacking or assigned to the (020) reflection) [39] and 2θ ~ 37.5° (assigned to the (111) reflection [40,41]). The XRD patterns of composites shows the presence of the characteristic diffraction peaks of rutile TiO2 (~27.6°, 36.1°, 41.3° 54.4°, 56.7° and 69.5°), suggesting the successful incorporation of rutile TiO2. Figure 3 implies that the poly(TMPT)/TiO2 nanocomposite has lower crystallinity than others. This can be associated with the introduction of dimethyl substituents in the PProDOT or poly(TPT/TiO2), which may decrease the crystallinity with its separation effect on the polymer main chains [42]. However, the intensity of the characteristic diffraction peaks of TiO2 is lower in the case of the PProDOT/TiO2 and poly(TPT)/TiO2 nanocomposites than that of PProDOT-Me2/TiO2 and poly(TMPT)/TiO2, suggesting that the TiO2 particles are uniformly embedded in the polymer matrix of PProDOT/TiO2 and poly(TPT)/TiO2 [43].

The energy dispersive X-ray spectroscopy (EDX) analysis on each composite is presented in Figure 4. As shown in Figure 4, the elements of C, O, S, Cl, Ti and Fe are observed. Additionally, the quantitative analysis of the result of EDX indicates that the wt% of Ti in each nanocomposite is 1.55%, 2.20%, 3.34% and 3.12%, respectively, which implies that poly(TPT)/TiO2 and poly(TMPT)/TiO2 have a higher wt% of TiO2 than that of PProDOT/TiO2 and PProDOT-Me2/TiO2.

Figure 5 represents the transmission electron microscopy (TEM) images of solid-state synthesized PProDOT/TiO2, PProDOT-Me2/TiO2, poly(TPT)/TiO2 and poly(TMPT)/TiO2. As shown in Figure 5, all the nanocomposites display a sponge-like morphology, except from the PProDOT/TiO2 nanocomposite. Additionally, the TiO2 particles (dark-shaded nanoparticles) are found to be entrapped in polymer (light shaded) matrix. These results reveal that the TiO2 particles are not simply mixed up or blended with the polymer, suggesting that the TiO2 particles are embedded in the polymer matrix, which is quite in accordance with the results of the XRD analysis.

Based on previous reports, the photocatalytic degradation of MB under UV or visible light irradiation is mainly related to the generation of reactive hydroxy and hydroperoxy radicals [44–46]. Herrmann et al. investigated the TiO2/UV photocatalytic degradation of MB in aqueous heterogeneous suspensions, and a detailed degradation pathway was determined by a careful identification of intermediate products, in particular aromatics, whose successive hydroxylations led to the aromatic ring opening. Furthermore, they found that TiO2/UV-based photocatalysis was simultaneously able to oxidize the MB with an almost complete mineralization of carbon and of nitrogen and sulfur heteroatoms into CO2, NH4+, NO3− and SO42−, respectively [47]. According to the reports, the hydroxy and hydroperoxy radicals produced by the action of photocatalyst are capable of oxidizing MB molecules at the surface layer of photocatalyst. MB molecules tend to be adsorbed by the surface of the catalyst. This process can be enhanced by controlling the surface charge of the photocatalyst. Moreover, MB is a cationic dye, and a negatively charged photocatalyst surface accelerates the adsorption of the MB and, consequently, the photo degradation process [44,45].

Figure 8 shows the schematic mechanism of MB dye degradation to explain the photocatalytic activity of the nanocomposite catalyst under sunlight. According to the previous report, TiO2 particles can absorb UV light to create electrons (e−) in the conduction band and holes (h+) in the valence band [48], respectively. If the electrons and holes cannot be captured in time, they will recombine with each other within a few nanoseconds, which will reduce the photocatalytic efficiency of TiO2. However, in the case of composites, due to the existence of the interface between polymer and TiO2, separated electrons and holes have little possibility to recombine again. This ensures higher charge separation efficiency and better photo-oxidation capacity for the nanocomposite. In addition, the polymer can absorb the visible light and produces an electron (e−) that transfers to the conduction band of TiO2 [48,49]. The amount of •OH and O2•− formed in the case of composites is more than that with TiO2 alone as a photocatalyst. Moreover, MB molecules can transfer from solution to the catalyst’s surface and be adsorbed with an offset face-to-face orientation via π-π conjugation between MB and aromatic regions of the polymer, and therefore, the adsorptivity of MB on polymer increases compared to that of MB on bare TiO2, which makes the composites have a higher efficiency in the photodegradation of MB compared to TiO2 alone as a photocatalyst.

2-(tributylstannyl)-thiophene, N-bromo-succinimide (NBS), 3,4-propylenedioxythiophene (ProDOT), 3,4-(2,2-dimethylenepropylenedioxy)thiophene(ProDOT-Me2) and anhydrous iron(III) chloride were obtained from Aldrich (Tokyo, Japan) and used as received. Pd (PPh3)4 was synthesized according to the literature [50,51]. The nano-TiO2 (rutile, lipophilic, with an average size of 100 nm, Shanghai Aladdin Reagent Company, Shanghai, China) and all other chemicals were used as received without further purification.

A typical solid-state synthesis procedure of the composite was as follows: a mixture of 0.3 g (0.9 mmol) 3,4-propylenedioxy-2,2′:5′,2″-terthiophene (TPT) and 15 mg TiO2 in 3 mL chloroform were ultrasonicated for 30 min to facilitate the monomer in adsorbing onto the surface of TiO2. After ultrasonication, the mixture was allowed to evaporate the chloroform, then the mixture was put in a mortar, and 0.61 g (3.6 mmol) anhydrous iron(III) chloride (FeCl3) were added to this mixture, then ground for 1 h. Then, the mixture was washed with chloroform, ethanol and distilled water, respectively, until the filtrate was colorless, finally drying the powder under vacuum at 60 °C for 48 h. The obtained composite was denoted as poly(TPT)/TiO2. Poly(TMPT)/TiO2 was synthesized in a similar manner by keeping the ratio of [TMPT]/[FeCl3] at 1:4.

The photocatalytic activities of nanocomposites were performed using MB as degraded materials in quartz tubes under UV light and natural sunlight irradiation. FSL MW1-Y15 (Royal Dutch Philips Electronics Ltd., Amsterdam, The Netherlands) was used as the irradiation source (λ = 254 nm) located in a light infiltrated chamber. Before irradiation, the suspension was stirred magnetically for 30 min in dark conditions until an adsorption-desorption equilibrium was established. Then, the suspensions were irradiated by light sources. Under natural sunlight investigations, all experiments were done inside a laboratory in an open atmosphere in the month of September. The photodegradation efficiency (R, %) was calculated by use of the following equation: R = [C0 − C/C0] (where C0 represents the concentration of the dye before illumination and C denotes the concentration of dye after a certain irradiation time, respectively).

We gratefully acknowledge the financial support from the National Natural Science Foundation of China (No. 21064007, No. 21264014) and the Opening Project of Xinjiang Laboratory of Petroleum and Gas Fine Chemicals (XJDX0908-2011-05). 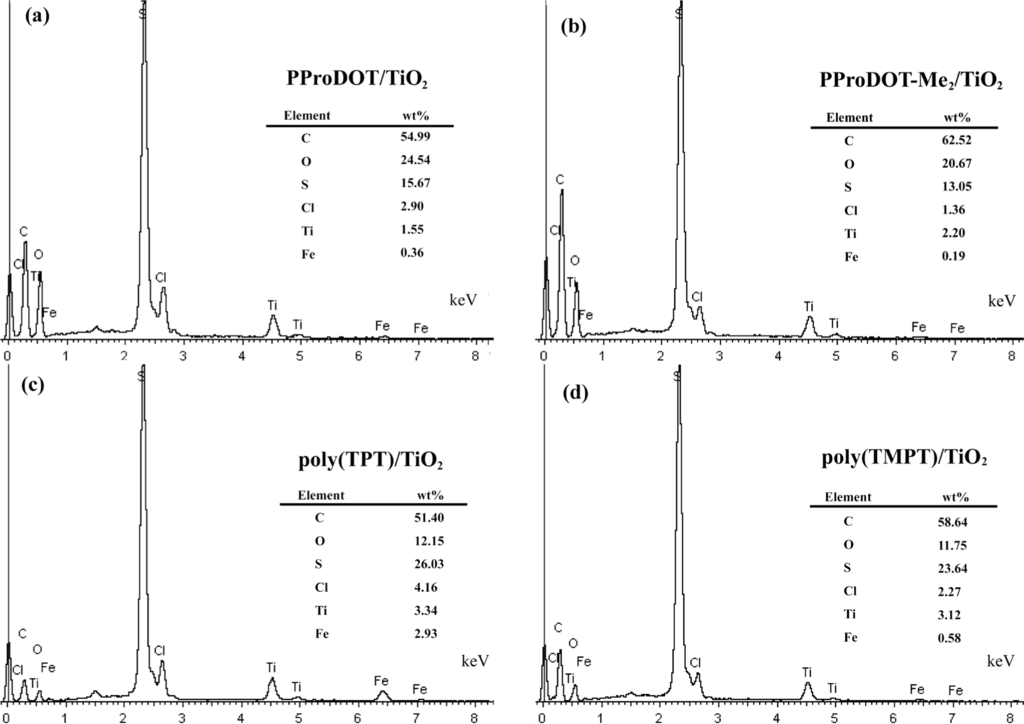 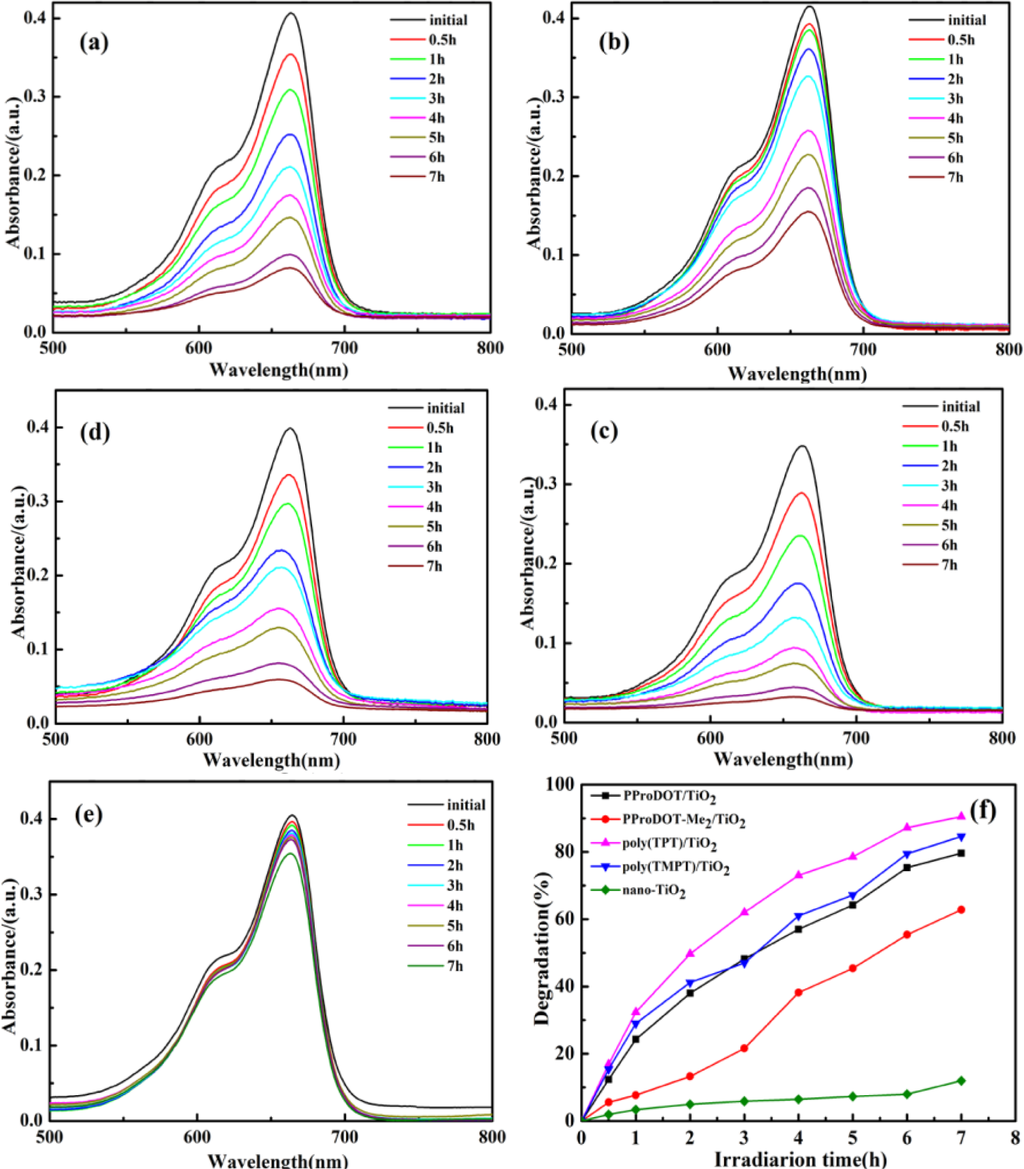 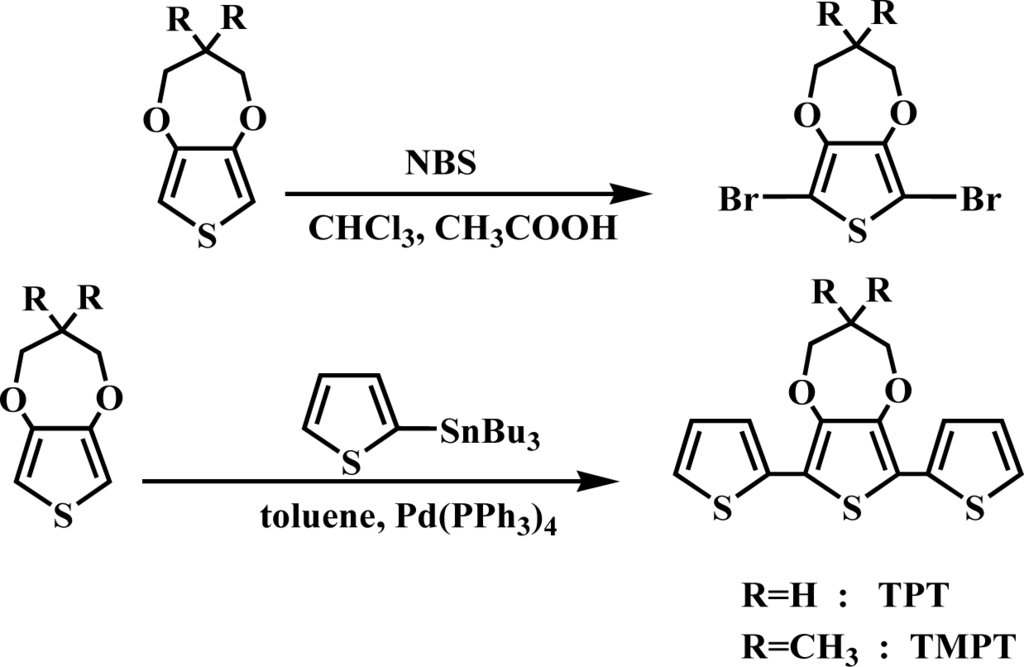