Although films of microfibrillated cellulose (MFC) have good oxygen barrier properties due to its fine network structure, properties strongly deteriorate after absorption of water. In this work, a new approach has been followed for actively tuning the water resistance of a MFC fiber network by the inclusion of dispersed organic nanoparticles with encapsulated plant wax. The modified pulp suspensions have been casted into films and were subsequently cured at 40 to 220 °C. As such, static water contact angles can be specifically tuned from 120 to 150° by selection of the curing temperature in relation with the intrinsic transition temperatures of the modified pulp, as determined by thermal analysis. The appearance of encapsulated wax after curing was followed by a combination of morphological analysis, infrared spectroscopy and Raman mapping, showing balanced mechanisms of progressive release and migration of wax into the fiber network controlling the surface properties and water contact angles. Finally, the appearance of nanoparticles covered with a thin wax layer after complete thermal release provides highest hydrophobicity. View Full-Text
Keywords: microfibrillated cellulose; hydrophobicity; encapsulation; wax; release microfibrillated cellulose; hydrophobicity; encapsulation; wax; release
►▼ Show Figures 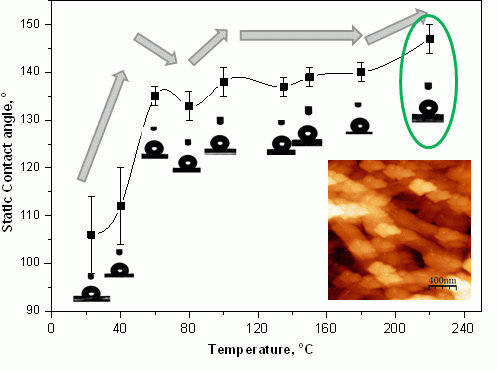