Cellulose is a cheap and renewable biopolymer in the world, traditionally used for paper, pulp and textiles. In recent years, cellulose has been rediscovered as a smart material that can be used for sensors, actuators and electronics [1]. The electromechanical behavior of so-called electro-active paper (EAPap) has been reported and electromechanical devices, such as physical sensor, speaker, bending actuator have been demonstrated [2,3,4]. Besides, electrochemical and electrical devices based on cellulose hybrid composites have also been reported, such as gas sensor, pH sensor, biosensor, and field effect transistor [5,6,7,8].
Zinc oxide (ZnO) is a well known nanomaterial. Because of its wide band gap (3.47 eV) and high hole-electron biding energy (60 meV), great attention is paid to it for semiconductors, photo-catalytic devices, gas sensors, photovoltaics and piezoelectric energy harvesters [9,10,11]. Furthermore, since ZnO is biocompatible, it is useful for biomedical applications [12]. Micro energy harvesting devices is also a great issue of this material. Nanoscale mechanical energy can be converted into electrical energy by means of piezoelectric ZnO nanowire arrays [13]. On the other hands, composite materials of ZnO and organic material are very promising for flexible devices [10,11]. To fabricate the organic-ZnO composite material, suitable organic substrate is important. Because cellulose is a renewable material, it can be a great candidate for the organic substrate of ZnO hybrid composite. Some research efforts have been given for growing ZnO nanostructure on cellulose. A ZnO nanowire based solar cell was made on a flexible paper by sputtering ZnO [14]. ZnO strain sensor was made on cellulose substrate by hydrothermal method [15]. However, they only used cellulose paper as a flexible substrate. Since paper has randomly oriented cellulose fibers, the paper surface is so rough that its sensing performance could be low.
In this paper, we report a fabrication of well-aligned ZnO nanorods on cellulose and its strain sensing behavior. To maintain good alignment of ZnO nanorods, a regenerated cellulose film was used, on which smooth surface is possessed, and a hydrothermal process was adopted with seeding and growing steps of ZnO. The fabricated CEZOHN is tested for its strain sensing behaviors under bending and longitudinal stretching modes.

At first, cellulose film was fabricated by dissolving cotton pulp and regenerating it. Detailed process was previously reported [2,4] and this is a brief summary. The pulp was dissolved by mixing it with DMAc and LiCl mixture at 150 °C with stirring. The cellulose solution was cast on a glass using a doctor blade, followed by putting into a mixture of deionized (DI) water and isopropyl alcohol. And then, a wet cellulose film can be obtained.
ZnO nanorods were grown on the wet cellulose film by using a hydrothermal process. Figure 1 shows the schematic of ZnO growing process divided into seeding and growing. To produce uniform ZnO nanorods, seeding process was added before ZnO nanorods growing. The wet cellulose film was fixed on a glass and it was loaded in 1000 mL DI water at 80 °C. 25 mM Zn(NO3)2 and TEA were added to the DI water with stirring for 250 rpm. The aqueous solution was stirred and kept at 80 °C for 6 h. After seeding, the cellulose was washed with DI water to remove unfixed ZnO particles and kept in DI water. To grow ZnO nanorods, an aqueous solution of ZnSO4 and NH4Cl was prepared by adding 15 mM of ZnSO4 and 450mM of NH4Cl in 500 mL DI water at 60 °C. pH of the solution was controlled to 11.5 with NaOH to lead the deposition of ZnO [16]. The seeded cellulose was loaded in the solution and remained for 6 h at 60 °C. After growing, the ZnO grown cellulose was washed and dried over 6 h in an ambient condition. 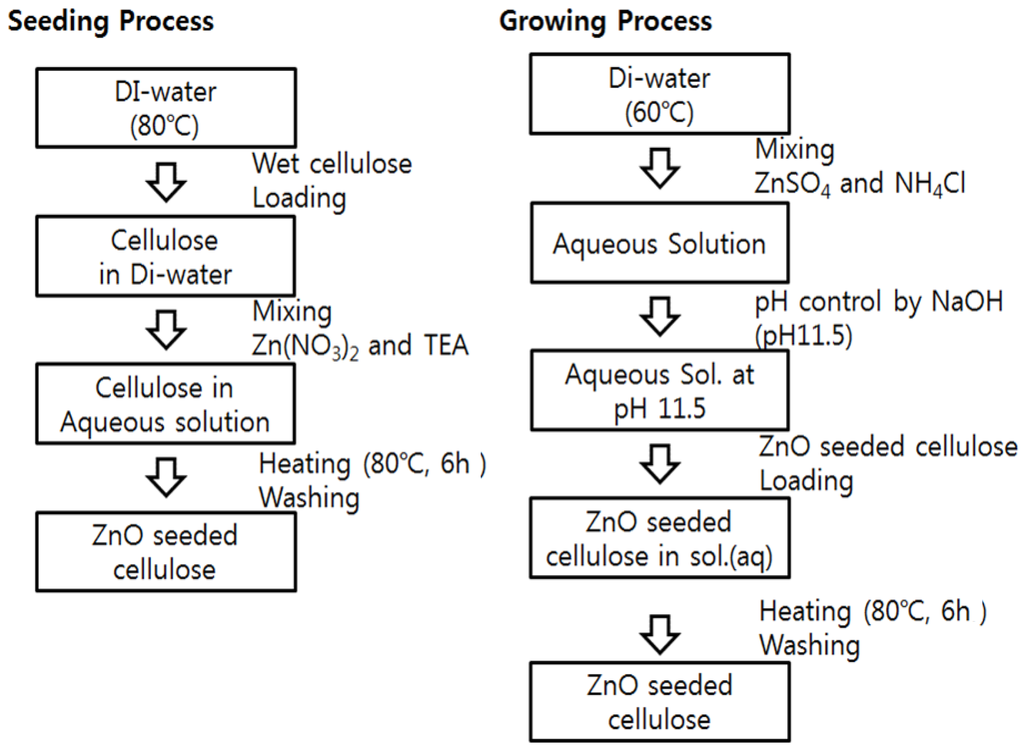 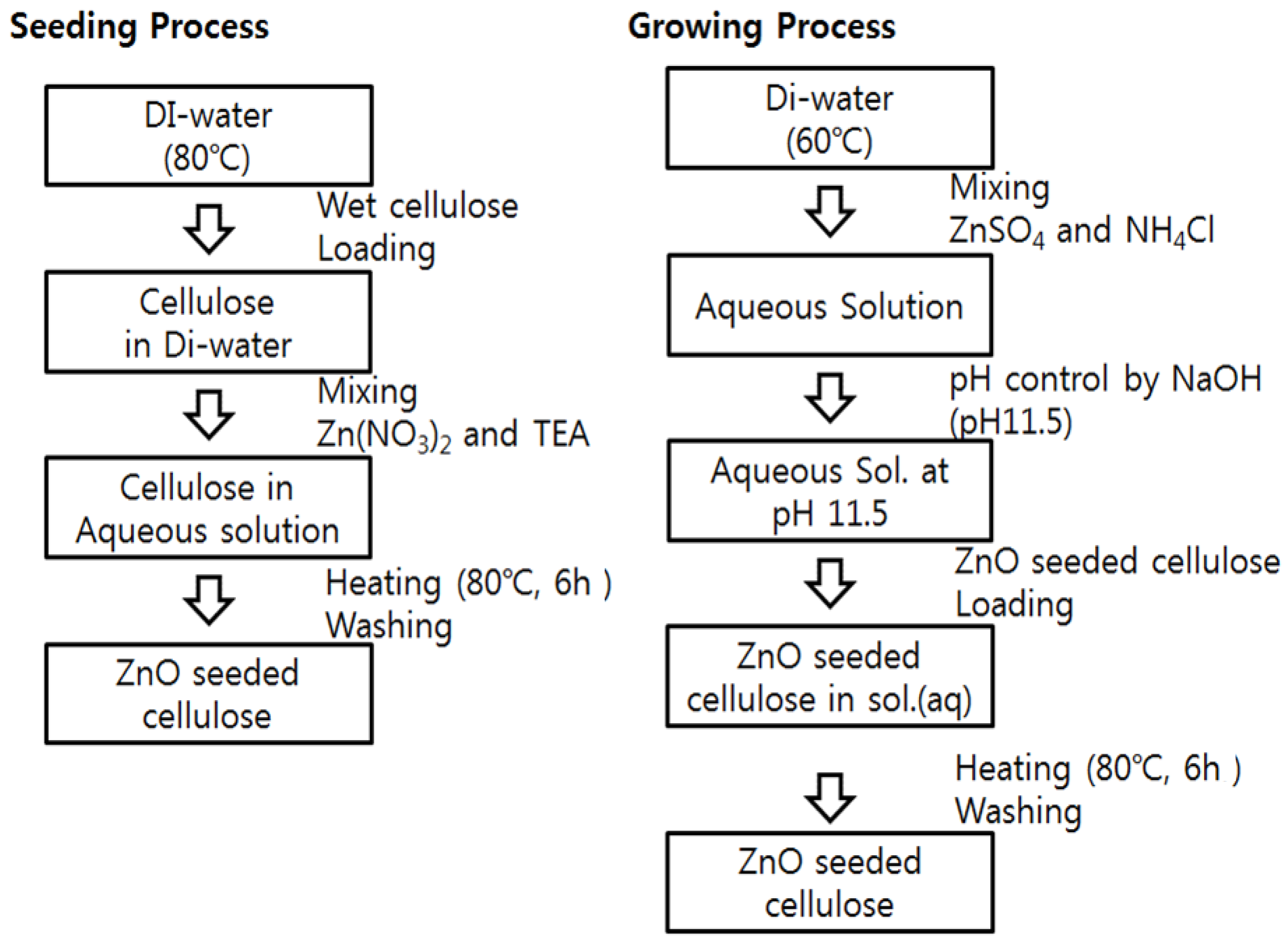 Before growing ZnO nanorods, the hydrothermal process was conducted without seeding. Figure 3 shows surface and cross sectional SEM images of ZnO nanorods grown on the cellulose film. The cellulose has smooth surface and after the growing ZnO, rod like particles and octahedral ZnO particles fully covered the cellulose surface. In the EDS result, particles are found to be ZnO and/or ZnOH. Octahedral structure of ZnO demonstrates that OH of Zn(OH)2 is not perfectly removed by the thermal hydrolysis reaction [16]. To increase the uniformity of ZnO nanorods, additional process is required. 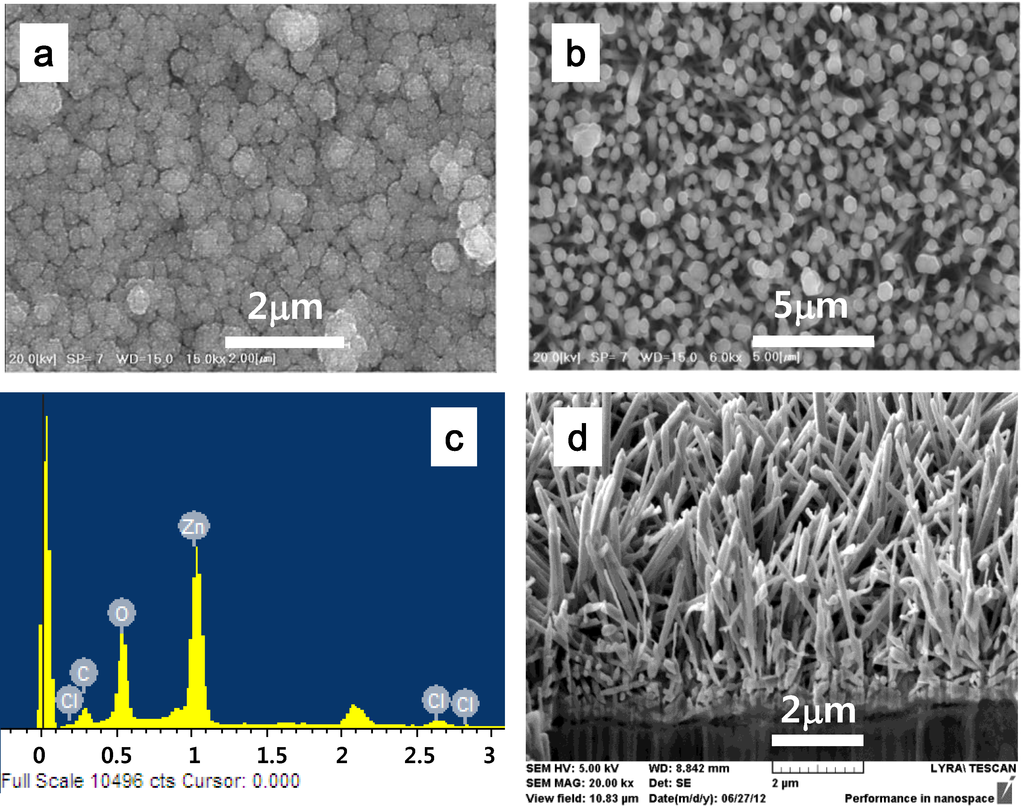 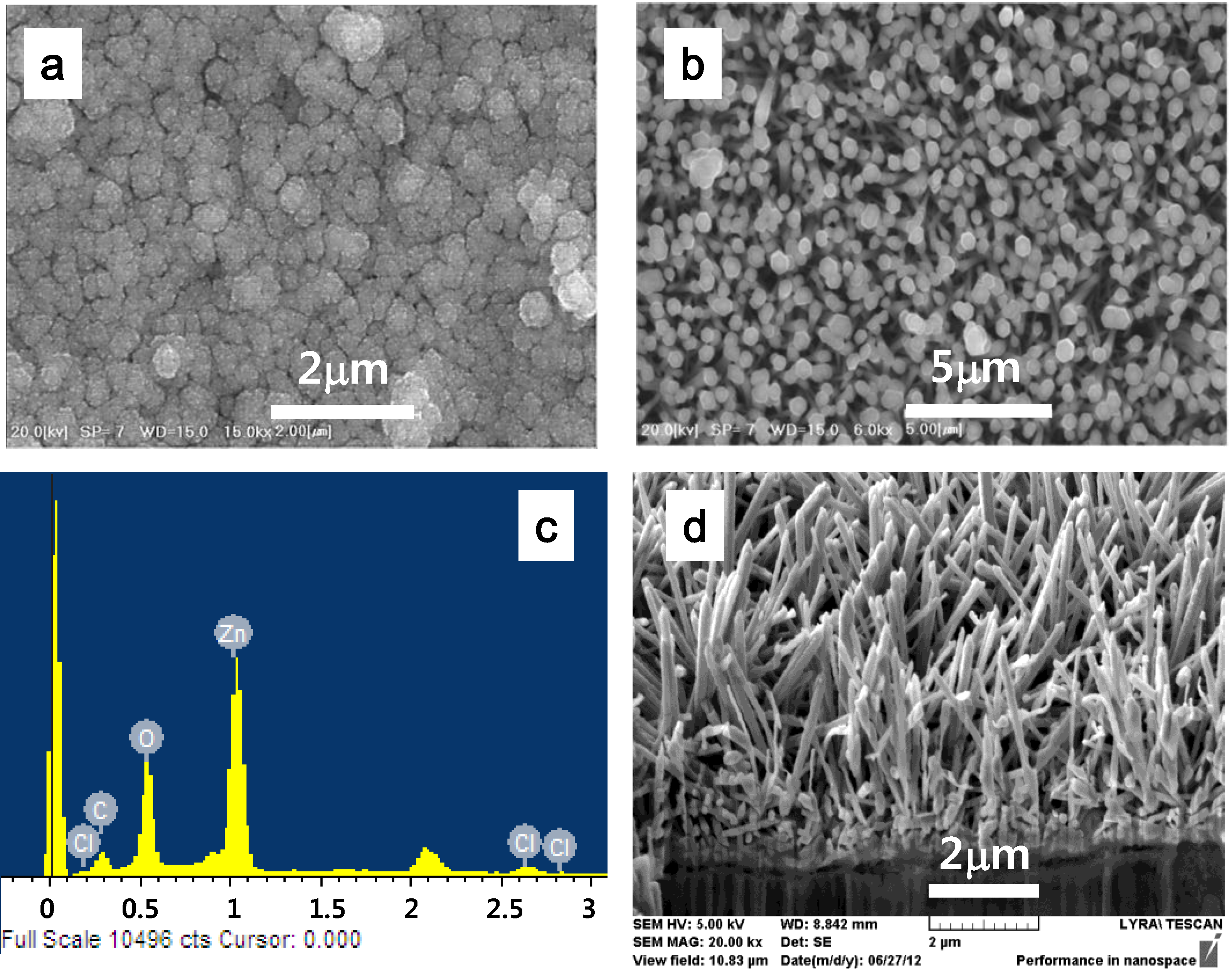 Figure 5a shows the XRD pattern of CEZOHN. Characteristic peak of cellulose appeared broadly at 2θ = 20.9° and narrow peaks at 31.7°, 34.4°, 36.2° are assigned to (100), (002) and (101), which shows Wurtzite structure of ZnO. Dominant (002) peak indicates that ZnO rods are well aligned perpendicularly, which is shown in Figure 4d. FT-IR spectrum of cellulose and CEZOHN is shown in Figure 5b. At the cellulose spectrum, the broad band of OH functional group is observed at 3365 cm−1. The characteristic band of C–C with benzene ring at 1627 cm−1 and the C–H vibrations at 2912 cm−1 can be attributed the cellulose. Although characteristic band of ZnO is almost covered with cellulose characteristic band in the spectra of CEZOHN, the spectra demonstrate intensity reduction of functional bands of cellulose suggesting that hydroxyl groups are occupied with ZnO. In other words, ZnO is physically interacting to cellulose chains. 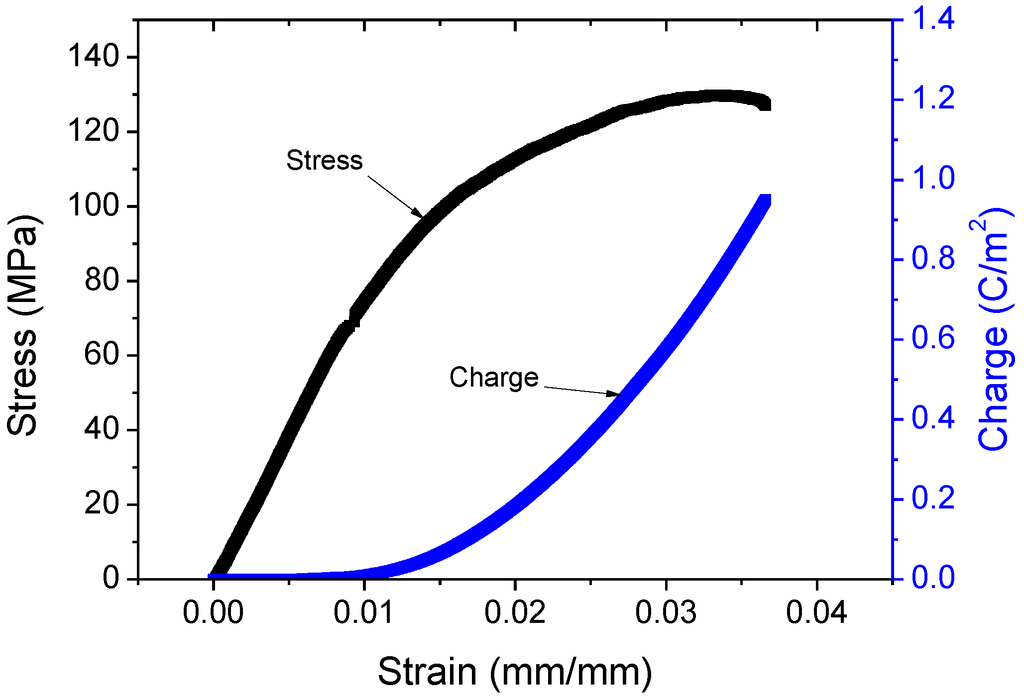 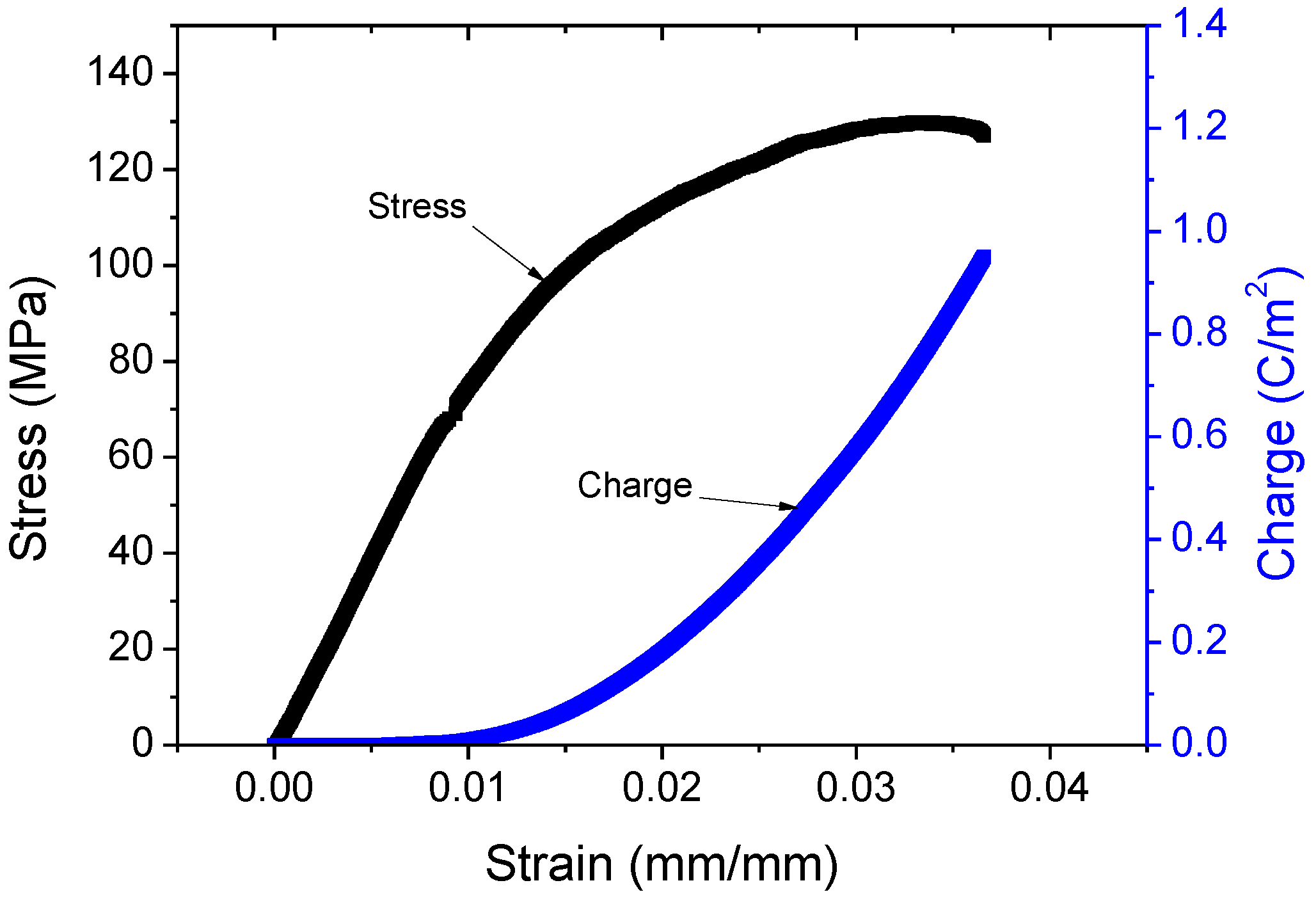 Table 1. Comparison of Young’s modulus and piezoelectric charge constant of cellulose and CEZOHN.

Strain sensing performance of CEZOHN was tested for bending and longitudinal stretching modes. Figure 7 shows the bending displacement at the tip of the cantilever structure and the strain signal under bending mode. When the cantilever beam was tipped 24 mm, 3 mV of the bending sensor signal was occurred. The voltage signal and displacement signal show an equivalent free vibration. 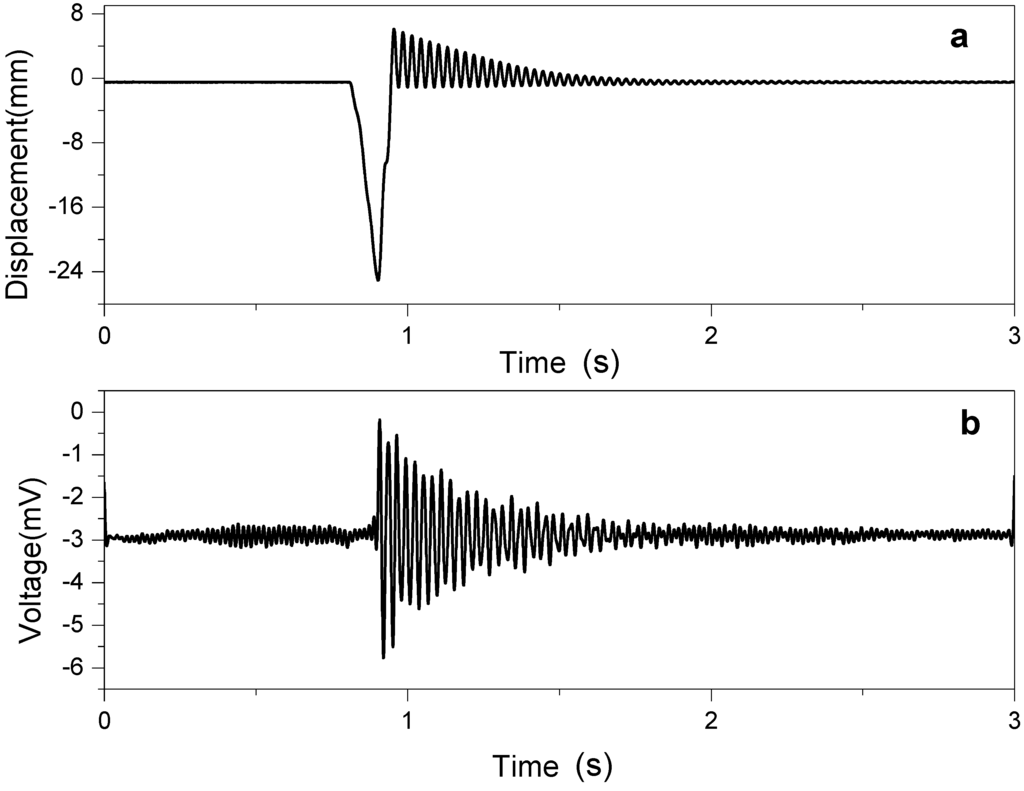 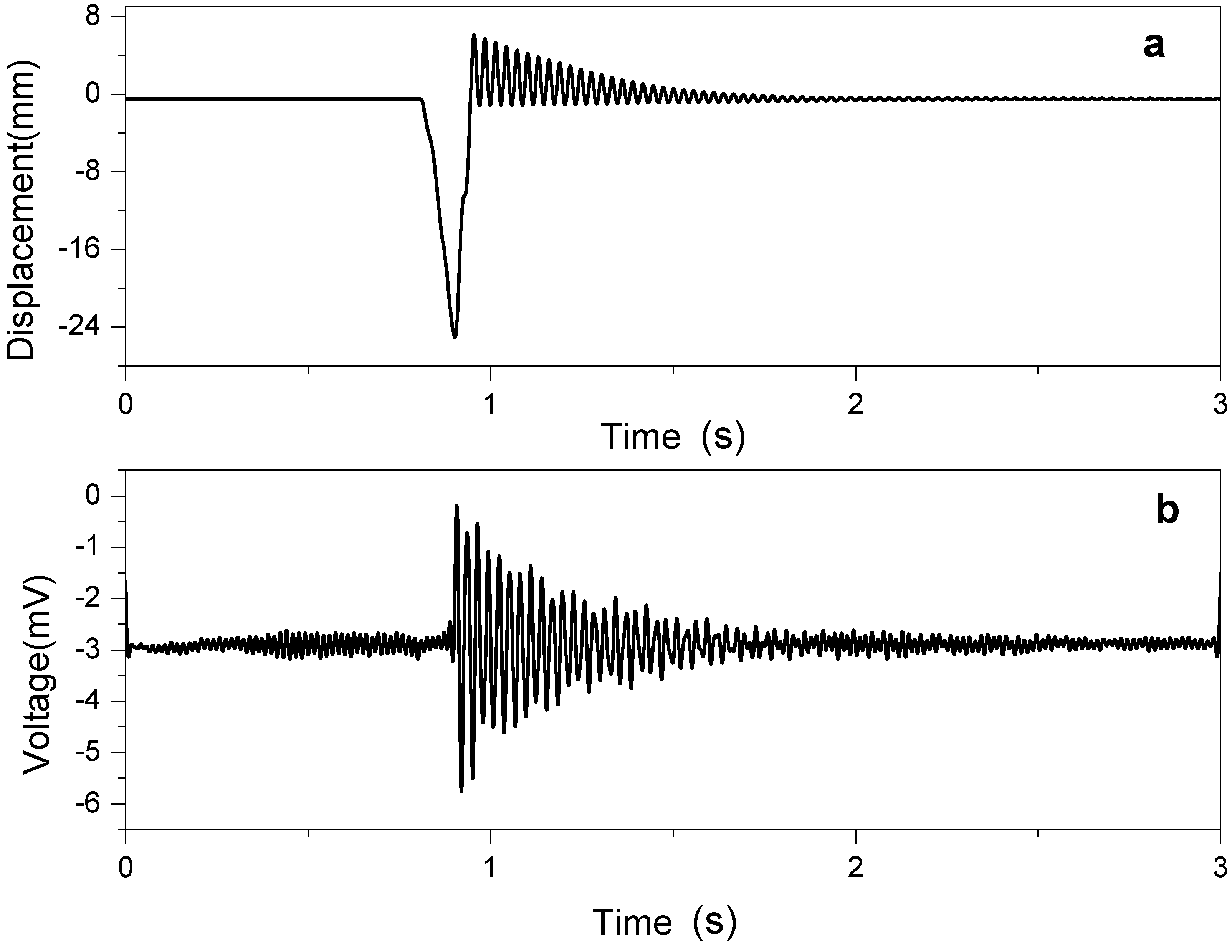 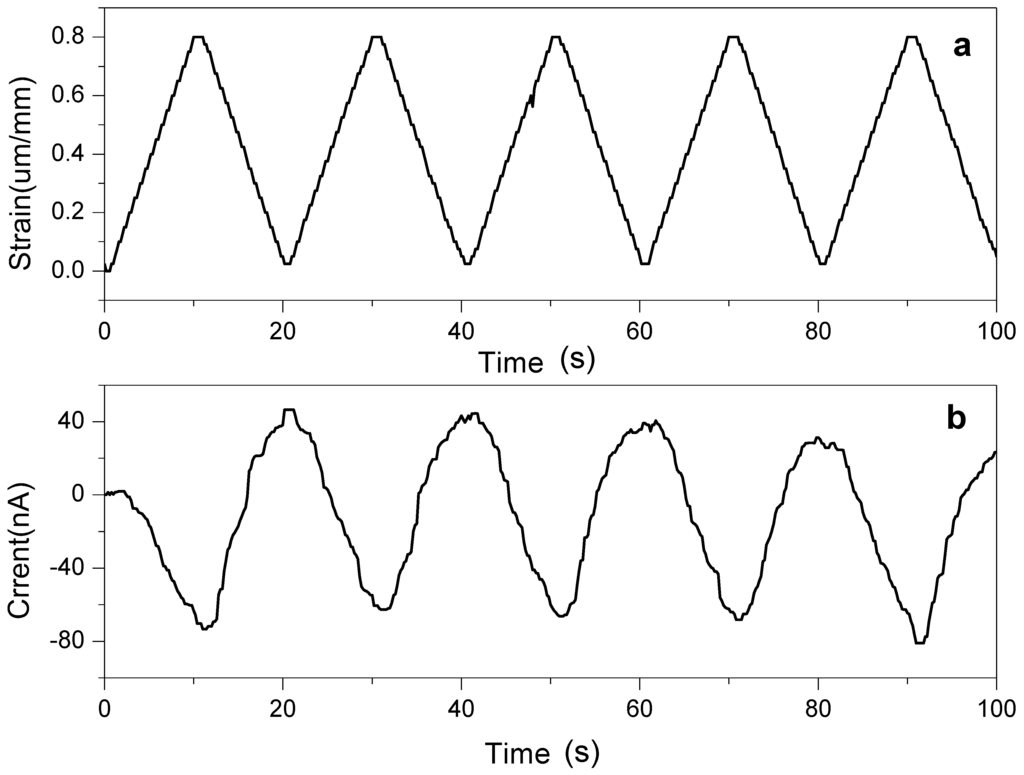 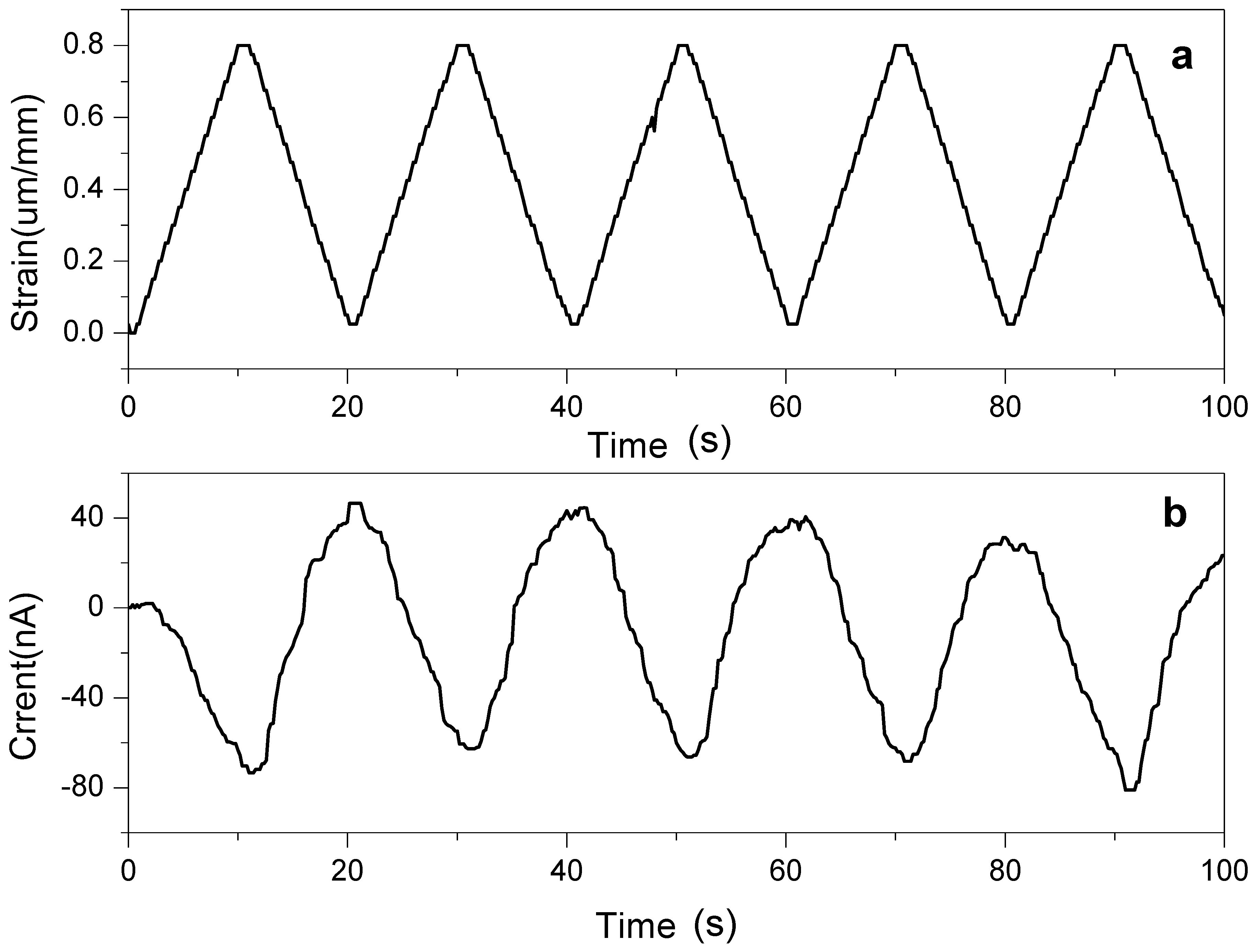 Well-aligned ZnO nanorods on cellulose were successfully fabricated by using a low temperature hydrothermal process. Seeding process was introduced for deposition of uniform ZnO nanorods before growing process. Piezoelectric charge constant of CEZOHN was increased 6 times larger than the aligned cellulose case. When the CEZOHN strain sensor was tested under bending and longitudinal stretching modes, it followed the strain curves. In longitudinal stretching mode, calculated piezoelectric charge constant from the sensor signal was similar to the quasi-static piezoelectric test result.

This research was supported by Basic Science Research Program through the National Research Foundation of Korea (NRF) funded by the Ministry of Education, Science and Technology (NRF-2012R1A2A1A01002087) and Inha Research Fund of Inha University.