Hydrophobic Modification of Layered Clays and Compatibility for Epoxy Nanocomposites

Recent studies on the intercalation and exfoliation of layered clays with polymeric intercalating agents involving poly(oxypropylene)-amines and the particular uses for epoxy nanocomposites are reviewed. For intercalation, counter-ionic exchange reactions of clays including cationic layered silicates and anionic Al-Mg layered double hydroxide (LDH) with polymeric organic ions afforded organoclays led to spatial interlayer expansion from 12 to 92 Å (X-ray diffraction) as well as hydrophobic property. The inorganic clays of layered structure could be modified by the poly(oxypropylene)amine-salts as the intercalating agents with molecular weights ranging from 230 to 5,000 g/mol. Furthermore, natural montmorillonite (MMT) clay could be exfoliated into thin layer silicate platelets (ca. 1 nm thickness) in one step by using polymeric types of exfoliating agents. Different lateral dimensions of MMT, synthetic fluorinated Mica and LDH clays had been cured into epoxy nanocomposites. The hydrophobic amine-salt modification resulting in high spacing of layered or exfoliation of individual clay platelets is the most important factor for gaining significant improvements of properties. In particular, these modified clays were reported to gain significant improvements such as reduced coefficient of thermal expansion (CTE), enhanced thermal stability, and hardness. The utilization of these layered clays for initiating the epoxy self-polymerization was also reported to have a unique compatibility between clay and organic resin matrix. However, the matrix domain lacks of covalently bonded crosslink and leads to the isolation of powder material. It is generally concluded that the hydrophobic expansion of the clay inter-gallery spacing is the crucial step for enhancing the compatibility and the ultimate preparation of the advanced epoxy materials. View Full-Text
Keywords: layered silicates; clay; epoxy; nanocomposite; compatibility layered silicates; clay; epoxy; nanocomposite; compatibility
►▼ Show Figures 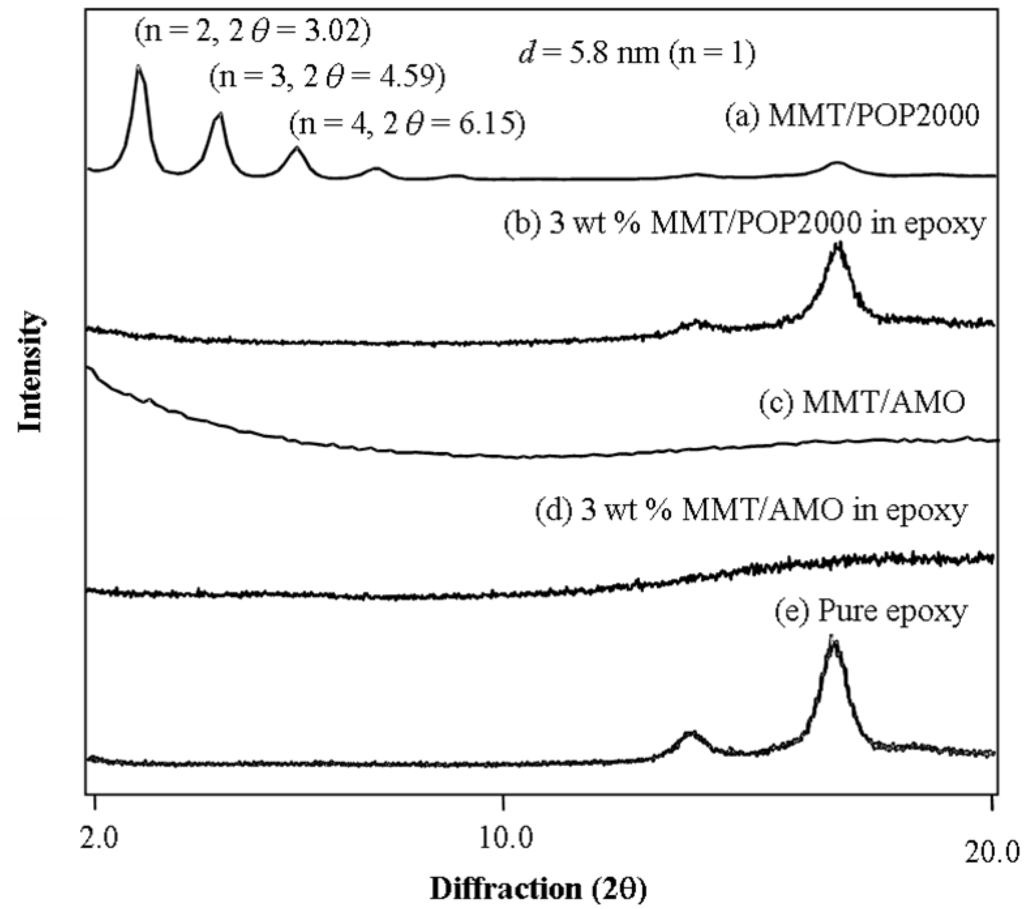