Piezoelectric Materials Synthesized by the Hydrothermal Method and Their Applications

Bond Strength—Coordination Number Fluctuation Model of Viscosity: An Alternative Model for the Vogel-Fulcher-Tammann Equation and an Application to Bulk Metallic Glass Forming Liquids

The Vogel-Fulcher-Tammann (VFT) equation has been used extensively in the analysis of the experimental data of temperature dependence of the viscosity or of the relaxation time in various types of supercooled liquids including metallic glass forming materials. In this article, it is shown that our model of viscosity, the Bond Strength—Coordination Number Fluctuation (BSCNF) model, can be used as an alternative model for the VFT equation. Using the BSCNF model, it was found that when the normalized bond strength and coordination number fluctuations of the structural units are equal, the viscosity behaviors described by both become identical. From this finding, an analytical expression that connects the parameters of the BSCNF model to the ideal glass transition temperature T0 of the VFT equation is obtained. The physical picture of the Kohlrausch-Williams-Watts relaxation function in the glass forming liquids is also discussed in terms of the cooperativity of the structural units that form the melt. An example of the application of the model is shown for metallic glass forming liquids. View Full-Text
Keywords: viscosity; VFT equation; BSCNF model; fragility; cooperativity viscosity; VFT equation; BSCNF model; fragility; cooperativity
►▼ Show Figures 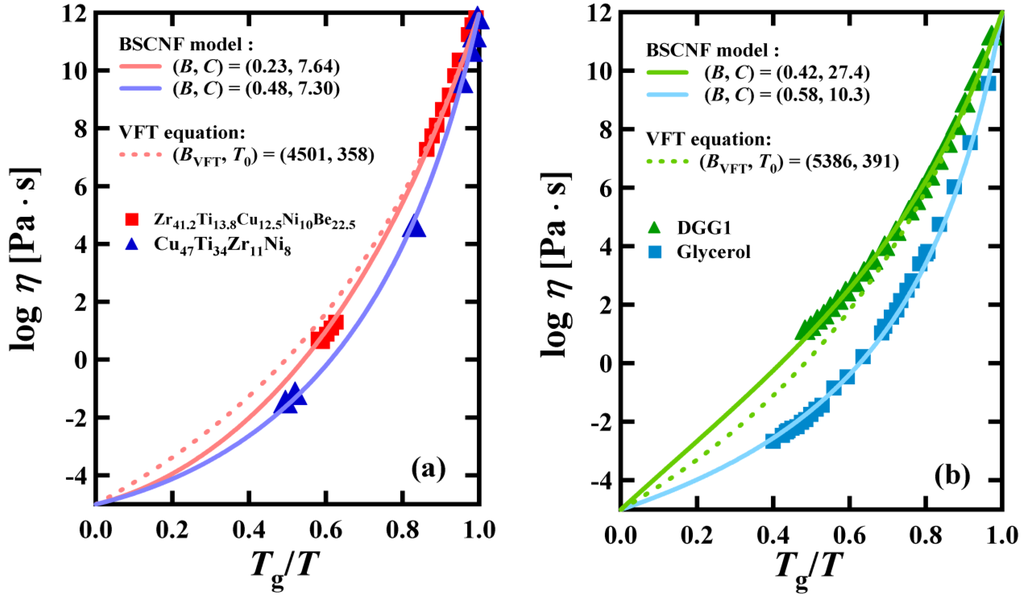