Polycyclic aromatic hydrocarbons (PAHs) are hydrocarbons with fused benzene rings. The molecular structures of some typical PAHs are given in Table 1. The aqueous solubility of PAH decreases approximately one order of magnitude for each additional ring. For example, the aqueous solubility of naphthalene is about 30 mg/L and that of phenanthrene is only about 1 mg/L, while it is reduced to 0.1 mg/L for pyrene. The low aqueous solubility of PAHs limits their bioavailability and thus the efficiency of a bioremediation process. Motivated by the dramatic solubilization capacity of surfactants for hydrophobic compounds, surfactant-mediated bioremediation has been a research focus in recent years [1,2,3,4,5,6,7]. It’s generally assumed that the micellar phase of surfactants serves as a source of substrate. As the microorganism gradually depletes the hydrocarbons in the aqueous phase, the micelle-solubilized hydrocarbons diffuse into the aqueous phase. However, both positive and negative effects of surfactants on the degradation of hydrocarbons have been reported.

Table 1. The molecular structures of some typical PAHs.

In general, a surfactant molecule consists of a hydrophilic headgroup and one or two hydrophobic parts. The hydrophobic tail, usually a long hydrocarbon or fluorocarbon chain, acts to reduce the solubility of surfactant in water while the polar head has the opposite effect. The unique amphiphilic structures and properties of surfactants contribute to their versatility in numerous applications. Surfactant molecules can accumulate along the air-liquid and liquid-liquid interfaces and thus reduce both surface tensions and interfacial tensions at the same time. In addition, if the surfactant concentration exceeds a certain threshold, called the critical micelle concentration (CMC), at temperature higher than its Krafft temperature, surfactant monomers in aqueous solution will aggregate to form micelles of colloidal-size. Under such a condition, the hydrophobic solubilizates are incorporated into the hydrophobic cores of the micelles, which is called solubilization. More explicitly, solubilization may be defined as the spontaneous dissolving of a substance by reversible interaction with the micelles of a surfactant in a solvent to form a thermodynamically stable isotropic solution with reduced thermodynamic activity of the solubilized material [8]. The solubilization process can be described in Figure 1.

At surfactant concentrations above the CMC, the solubility of hydrocarbon increases linearly with surfactant concentration. Quantitative studies on the solubilization capacities of surfactants and effects of various parameters on the solubilization capacity of surfactants could be found in the literatures [9,10,11]. Apart from the solubility, the dissolution kinetics of hydrocarbons is also an important factor determining their biodegradation. This becomes more important when it comes to the remediation of weathered soils. The effects of surfactants on the dissolution kinetics of hydrocarbons from various matrices have also been reported. Surfactants are able to improve the mass-transfer of hydrophobic pollutants from a solid or non-aqueous liquid phase into the aqueous phase by decreasing the interfacial tension and by accumulating the hydrophobic compounds in the micelles [12,13].

2. Delivery of solubilized substrates into cells

The biodegradation of hydrocarbons includes the degradation of hydrocarbon molecules in both the aqueous phase and the micellar phase. The biodegradation of hydrocarbon molecules is controlled by the diffusion of the molecules to the cell surface or enzyme sites. The molecules in the micellar phase are degraded either by first diffusing into the aqueous phase and then are utilized by the bacteria or by directing microbial uptake from the micelles. The first process is controlled by the kinetics of micellar aggregation. The relaxation time of the micelle is typically on the order of milliseconds to microseconds. Therefore, the first process is normally not a rate-limiting step. The second process is described in Figure 2.
As shown in this Figure, the mass transfer from micelle into cell is composed of three steps. The first step is the transport of the micelles solubilized with a substrate to the vicinity of the cells or enzymes by mixing. The second step is the exchange of the filled micelles with the hemimicellar layer of surfactant molecules formed around the cells. The formation of hemi-micelle layer around the cell or other substrates has been proposed and used successfully by many authors to describe the biodegradation [14,15,16] and dissolution of PAH [12,17]. The third step is the transfer of the substrate from the hemi-micelle to the cell. In a well-stirred system, the first step is also not a rate limiting step. The second and the third step normally control the biodegradation of a substrate in the micellar phase. The process is affected by the specific interactions between the micelle and the cell surface. It has been reported that the specific interaction between the micelle and the cell surface, such as the affinity of the two surfaces, is a factor controlling the transport of the substrate from the micelle to the cell [15,16,18,19]. 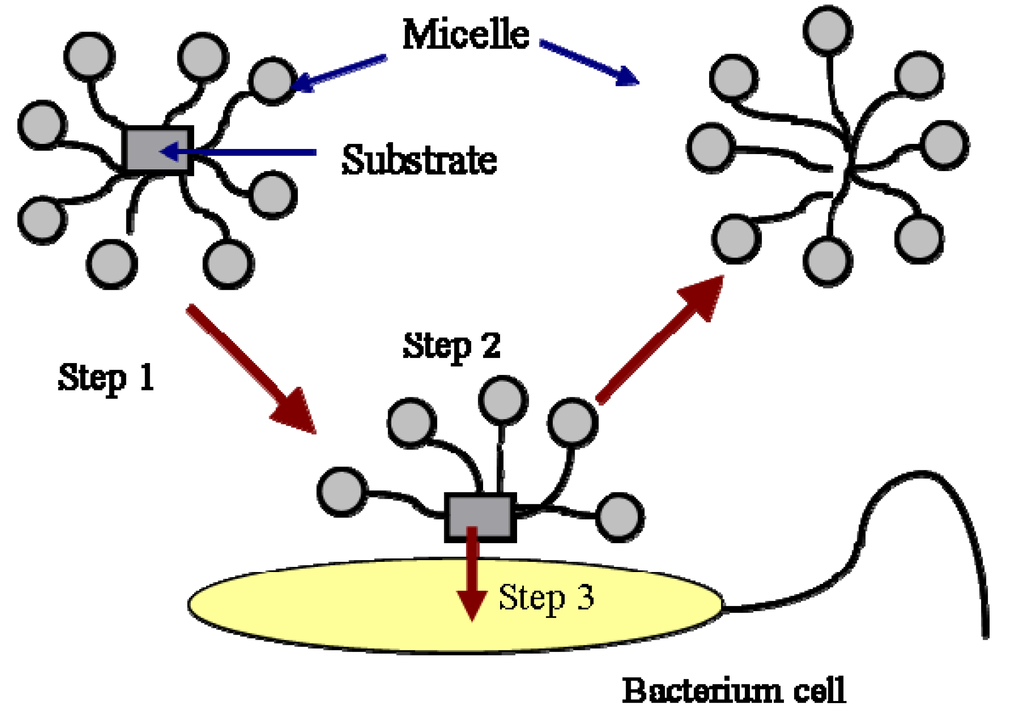 3. Effects of surfactants on biodegradation of PAHs

Although it is agreed that surfactants can enhance the solubility and dissolution of hydrocarbons from contaminated soil [20,21,22,23,24], contradictory results have been reported on the ability of surfactants to enhance the biodegradation of hydrocarbons. The focus is whether solubilization is conducive or inhibitory to the microbial uptake of hydrocarbons. The enhanced biodegradation in the micellar solution can be attributable to the increased solubility and bioavailability of substrate to bacteria [5,12,25,26,27,28,29,30,31,32,33,34,35,36], surfactant-enhanced substrate transport through the microbial cell wall [37,38], increased interfacial area in the presence of surfactant [39], enhanced contact of bacteria with the hydrocarbon-water interface [40], facilitated direct contact between cells and non-aqueous liquid phase [41], and decreased diffusion path length between the site of adsorption and site of bio-uptake by the microorganism due to enhanced adsorption of cells to hydrocarbon occupied soil particles in the presence of surfactant [42]. Tiehm and Frizsche studied the biodegradation of both single and mixture of PAHs presolubilized by surfactant [43]. Accelerated biodegradation rates were found for both single and mixed PAHs presolubilized compared with the rate of PAHs in crystal form. This indicated that solubilization increased the bioavailability of PAHs.
The inhibitory effect was normally observed at surfactant concentrations approaching and exceeding the CMC. Potential mechanisms of inhibition include toxicity of surfactant to the microorganism [44,45,46], preferable microbial uptake of surfactants as substrate [47,48], and inhibition of the direct contact between cells and hydrocarbon by surfactant micelles [49,50]. It was also observed that the effect of surfactant was also dependent on the specific bacteria involved [18,19], which means that the specific interactions between bacteria and surfactant also play an important role. Some reported effects of surfactants on the biodegradation of PAHs are summarized in Table 2. It shows that several factors contribute to the overall effects of surfactants. For a same culture, different surfactants may have different overall effects [18,51], and, likewise, for a same surfactant, the overall effect differs when different microorganisms are involved [19].

4. Mechanisms of surfactant effects on biodegradation of PAHs 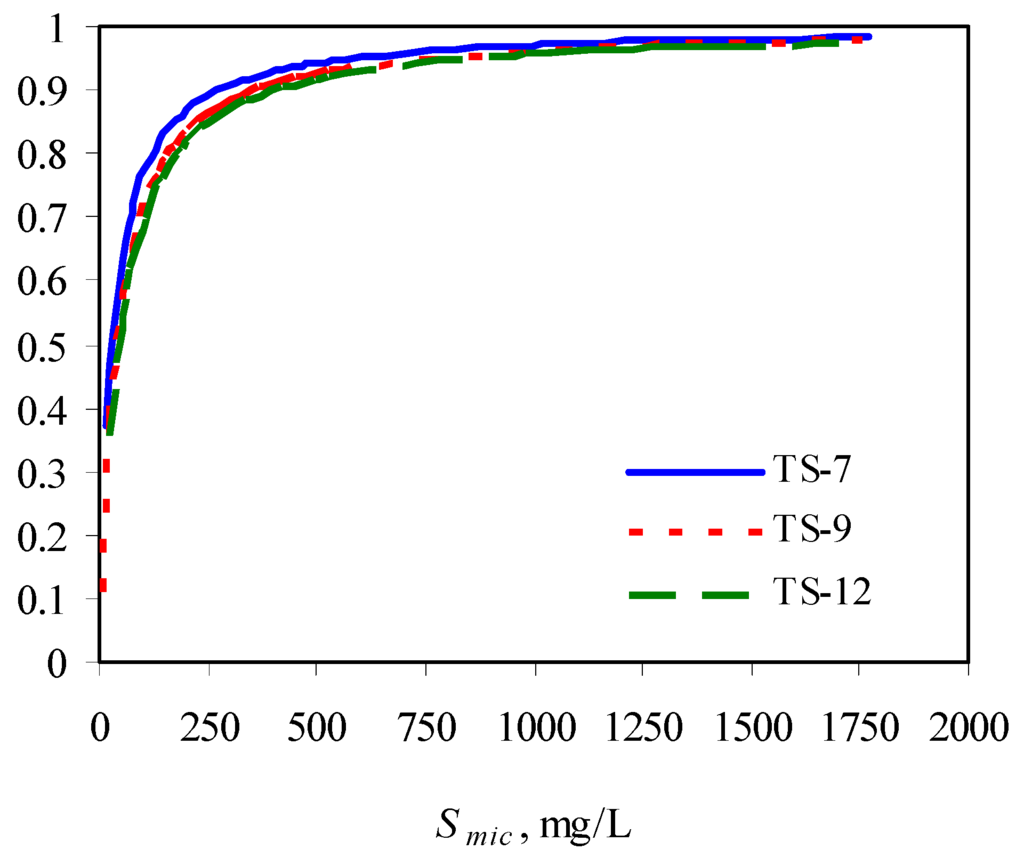 4.4. Toxicity of PAHs at high concentrations due to solublization

5. Ways to reduce the negative effects of surfactants

5.1. Biosurfactants as alternatives to synthetic surfactants

As discussed above, the toxicity of a surfactant is mainly due to its membrane susceptibility. Therefore, suitable additives can be searched to reduce the susceptibility of cells to surfactant. It was observed that the toxicity of Triton X-100 on Sphingomonas paucimobilis strain EPA505 can be significantly reduced in the presence of calcium ions (Ca2+) [82]. In the absence of Ca2+, Triton X-100 at a concentration of 0.48 mM (0.3g L-1) reduced cell viability by 100% and thus completely inhibited the biodegradation of fluoranthene. In the presence of 4.13 mM Ca2+, the cell viability was reduced only by 10% and the maximum mineralization rate of fluoranthene was more than doubled. It is likely that the Ca2+ ions can stabilize the cell membrane, making the cell less sensitive to the surfactant. Mg2+ was also observed to enhance the surfactant tolerance of the cell, but to a less extent than Ca2+.

5.3. Selection of suitable combinations of surfactant and microorganisms

As shown in Table 2, a certain strain of microorganism can respond differently to different surfactants which it is exposed to. This is due to the specific interactions between the surfactant molecules and cell membrane. Therefore, for a selected microorganism, prescreening work has to be done to make a choice of a suitable surfactant. Molecular simulation can also be adopted to predict the interaction between a surfactant and cell in surfactant selection. Nevertheless, other parameters of a surfactant especially its solublization capacity has to be taken into consideration.

This work gives a review of surfactant effects on the biodegradation of solubilization of PAHs, a family of common and toxic pollutants that have raised significant environmental concerns. Surfactants have been proven to be important vehicles for the recovery of these compounds from contaminated soil or aquifers due to the solubilization process. Both positive and negative effects have been reported on surfactants on microbial utilization of PAHs. The positive effects are generally attributable to the increased solubility/dissolution these compounds by surfactants which enhances their bioavailability. The negative effects are contributed by a variety of factors, which include toxicity of surfactants to microorganism, preferential degradation of surfactants and limited bioavailability of substrate solubilized in surfactant micelles. Nonionic surfactants are normally less toxic to microorganisms than ionic surfactants due to the weaker interactions between the neutral surfactant molecules and charged cell membrane. For a bioremediation application, solubilization efficiency is a prior criterion for the selection of a surfactant. However, its biodegradability and toxicity to the microorganism have to be considered to ensure an efficient remediation and the environmentally friendly application of the surfactant. Other important parameters of surfactant to be considered include its soil adsorption and cloud point. Surfactants with moderate biodegradability to the microorganisms should be considered. Firstly, sufficient solubilization capacity of such a type of surfactant can be maintained during a bioremediation process. Secondly, the reduction of effective surfactant concentration can increase the bioavailability of the substrate by releasing them into the aqueous phase. Thirdly, surfactants with a certain degree of biodegradation are more environmentally benign. Selection of surfactants that are nontoxic or with minimal toxicity to microorganisms is also essential to achieve a successful bioremediation. Biosurfactants are good alternative to synthetic commercial surfactants in term of low cytotoxicity. However, their application is limited due to their small scale production. To make the surfactant-mediated bioremediation a cost effective technique, efforts should be taken on the development of synthetic surfactants that biologically compatible with cells.