Investigation of the Densification Behavior of Alumina during Spark Plasma Sintering

The article presents the results of the investigation of the mechanism of the densification behavior of alumina-based ceramics during spark plasma sintering. The role of the heating rates and additives were investigated. The first (initial) stage of sintering was investigated by the Young–Cutler model. The second (intermediate) stage of sintering was investigated as a process of plastic deformation of a porous body under external pressure. It was shown that, at the initial stage, the formation of necks between the particles is controlled by grain boundary diffusion (the activation energy is Qb ≈ 20 kTm). At this stage, accommodation of the shape of the alumina particles is also occurring (an increase in the packing density). The accommodation process facilitates the shrinkage of the powder, which is reflected in a decrease in the effective activation energy of shrinkage at low heating rates (10 °C/min) to Qb ≈ 17 kTm. At heating rates exceeding 10 °C/min, the intensity of the processes of accommodation of alumina particles turns out to be much slower than the existing diffusion processes of growth of necks between the alumina particles. It was shown that the grain boundary sliding mechanism that occurs in the second stage of sintering can play a decisive role under conditions of spark plasma sintering with a high heating rate. The found value of the activation energy at the second stage of sintering is also close to the activation energy of grain–boundary diffusion of alumina (Qb ≈ 20 kTm). The influences of the second phase particles of MgO, TiO2, and ZrO2 on densification behavior of alumina-based ceramics were investigated. Since at the first stage of sintering the densification relates with the formation of necks between the particles of alumina, the additives (0.5% vol) have no noticeable effect on this process. It was also shown that the second phase particles which are located at the grain boundaries of alumina are not involved in the slip process during the second sintering stage. Analysis shows that additives act only in the final (third) stage of spark plasma sintering of alumina. View Full-Text
Keywords: alumina; spark plasma sintering; densification; sintering stages alumina; spark plasma sintering; densification; sintering stages
►▼ Show Figures 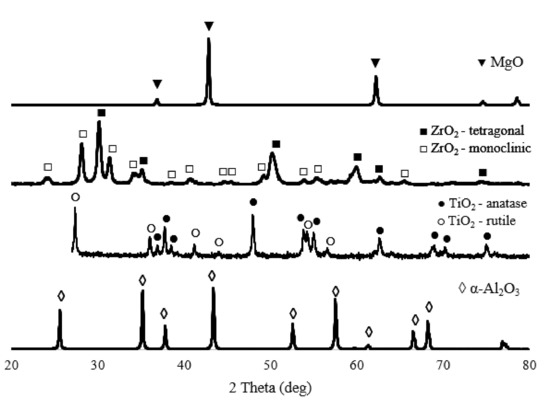