The monomer tert-butyl acrylate (tBA), the crosslinker poly (ethylene glycol) dimethacrylate (PEGDMA), with typical molecular weight of 550 and photo-initiator 2,2-dimethoxy-2-phenylacetophenone (DMPA) were ordered from Sigma Aldrich, and isopropyl alcohol (≥99.5%) (IPA) was ordered from Aladdin. All chemicals were used as received. Two different solution were prepared by mixing tBA with PEGDMA, with a weight ratio of 98%:2% or 80%:20%. The photo-initiator, DMPA, was then added to the comonomer solution at a concentration of 0.2 wt.% of the total comonomer weight. The mixture was then injected into two glass slides separated by a 1 mm space and cured in a UV oven (CL-1000L Crosslinker, Analytik Jena, Upland, CA, USA) for 20 min. After the UV curing, the specimens were further thermally cured in an oven at 80 °C for 1 h to achieve a full polymerization. Table 1 lists the polymers synthesized in this work.
As described above, the acrylate-based polymers can be synthesized through one-step photo-polymerization. In addition, the crosslink density, related to the rubbery modulus, and the glass transition region can both be easily tuned in this material system, which makes acrylate-based polymers good candidates as shape-memory polymers [5].

Rectangular specimens with a size of 20 mm × 5 mm × 1 mm were used to measure the swelling ratio. Each specimen was weighed before testing. The specimens were immersed in IPA for different times and then taken out of the solvent and wrapped with aluminum foil for three days at room temperature (20–25 °C), then weighed again by a digital balance with an accuracy of 10−4 g. This step is to ensure a homogenous distribution of solvents in specimens. For each measurement, three specimens were repeated. The swelling ratio is then defined as where is the weight of initial dry specimen and is the weight after treated by IPA.

Amorphous polymers exhibit a time-dependent viscoelastic response in the glass transition region, such as stress relaxation, creep and rate-dependent stress responses. The time scale for relaxation may span several decades. Thus, it is difficult to obtain all the characteristics of relaxation within a single test. Fortunately, the time–temperature superposition (TTS) principal works for many amorphous polymers. Thus, it is possible to construct a master curve for viscoelastic responses at one single reference temperature by conducting tests at various temperatures.
Here the dynamic frequency sweep tests are adopted to obtain the relaxation spectrum of polymers with different solvent concentrations. Before tests, Vaseline was painted on the surface of the wet specimens in order to prevent significant evaporation of solvents at high temperatures. The specimens were heated in a discrete manner with an interval of 5 °C, annealed at each test temperature for 5 min and then subjected to a 0.2% dynamic strain at 0.3, 1, 3, 10 and 30 Hz.
Here, we use the results for dry polymers with 2 wt.% crosslink density as an example to demonstrate the procedures to obtain the master curve and the relaxation spectrum. As shown in Figure 1a, the storage modulus depends on temperature and frequency. The frequency-dependent storage modulus at various temperatures was then shifted to the reference temperature 75 °C through only a horizontal shift to form a master curve shown in Figure 1b.
The shift factor used to construct the master curve is plotted in Figure 2a. It can also be seen that the shift factor can be fitted by the Williams–Landel–Ferry (WLF) equation [15] with the following form where and are the WLF constants at the reference temperature . The reference temperature is close to the end temperature of the glass transition region. The procedures to obtain and can be found in some literatures [15,16]. The WLF constants at , which correspond to the beginning temperature of the glass transition region, can also be obtained using the following relationship:
The parameters for WLF constants for polymers with 2 wt.% crosslink density are listed in Table 2, while the corresponding values for polymers with 20 wt.% crosslink density are listed in Table 3. Figure 2b plots the shift factors at the glass transition temperature , with the obtained values of and .
To analyze the effects of solvents on the relaxation behaviors, the master curve of the storage modulus is further fitted by a fractional Zener model [16,17,18]. The Zener model is composed of a spring in parallel with a Maxwell element. The spring is used to represent the equilibrium elastic response while the Maxwell element is used to describe the viscoelastic response. However, it is found that the Maxwell model predicts an exponential form for the relaxation response, which is not consistent with the actual relaxation response in polymers. Alternatively, the integer order derivative of the Maxwell model can be replaced by a fractional order derivative, which provides a better description on the viscoelastic response of polymers. Thus, the fractional Zener model in total contains four parameters: the rubbery modulus , the glassy modulus , the characteristic relaxation time , and the fractional order denoting the breadth of the relaxation spectrum [17]. The analytical expression of storage modulus can be represented as,
The rubbery modulus and the glassy modulus can be obtained from the modulus in the plateau regions. To determine the values of the parameters and , the following function was minimized: where and are the fitted and measured storage modulus, respectively.
As shown in Figure 3, the master curve can be well described by the fractional Zener model with the model parameters listed in Table 4 and Table 5. However, at the highest frequency, the fractional Zener model overestimates the storage modulus. This is because the fractional Zener model is based on the equilibrium structure state. At the highest frequency, corresponding to low temperature, the polymer structure may fall out of the equilibrium due to structural relaxation.

Glass transition can be affected by many factors, such as thermal treatment and plastination effects. In the past several years, our group has combined experiments and theory to comprehensively investigate the effects of physical aging on the glass transition behaviors in amorphous polymers [30,31]. In this work, we focus on understanding the effects of solvents on glass transition. A series of experiments were carried out to characterize the glass transition of amorphous polymers with different solvent concentrations. It is shown that all polymer–solvent systems investigated exhibit a glass transition behavior, even for the systems with more than 60 wt.% of solvents. The glass transition region shifts to a lower temperature with increasing solvent concentration. The classic methods to analyze the dry polymers, such as the time–temperature superposition principal, can still be applied for wet polymers. Specifically, master curves of storage modulus as a function of frequency can be constructed using the time–temperature superposition principal. The shift factors used to construct the master curves can be well fitted by the WLF equation, which indicates the underlying mechanism for glass transition is the same for wet polymers and dry polymers. An analytical model with four parameters was also used to fit the master curve. It is found that solvents can decrease the rubbery modulus and the glassy modulus. More importantly, the presence of solvents can significantly expand the breadth of the relaxation spectrum, which may be attributed to the change of strength of intermolecular interaction caused by the chemical or physical bonding newly formed between solvent and polymer molecules [27]. This raises more challenges for developing theories for the glass transition behaviors of polymers and polymer–solvent systems [32,33]. 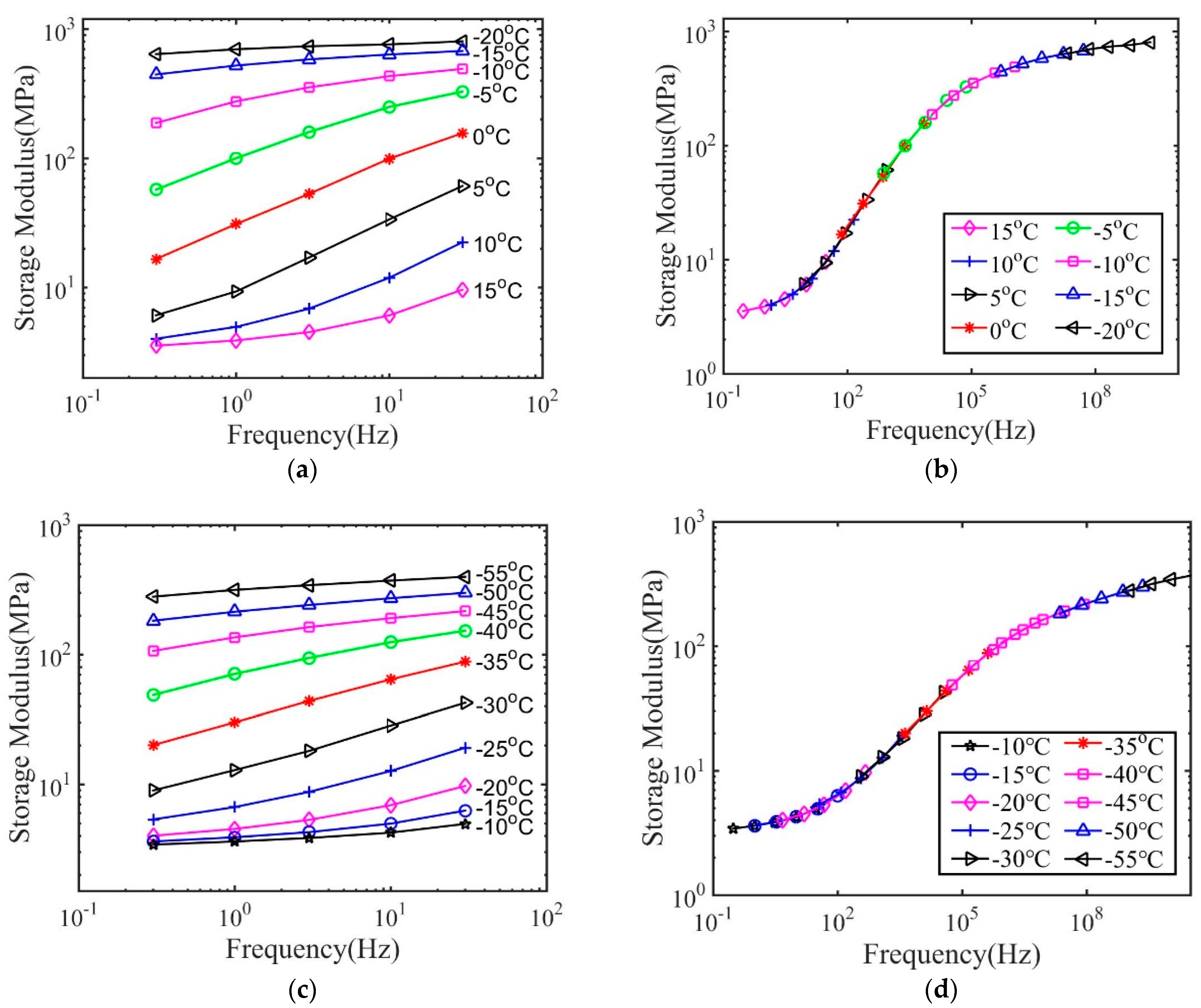 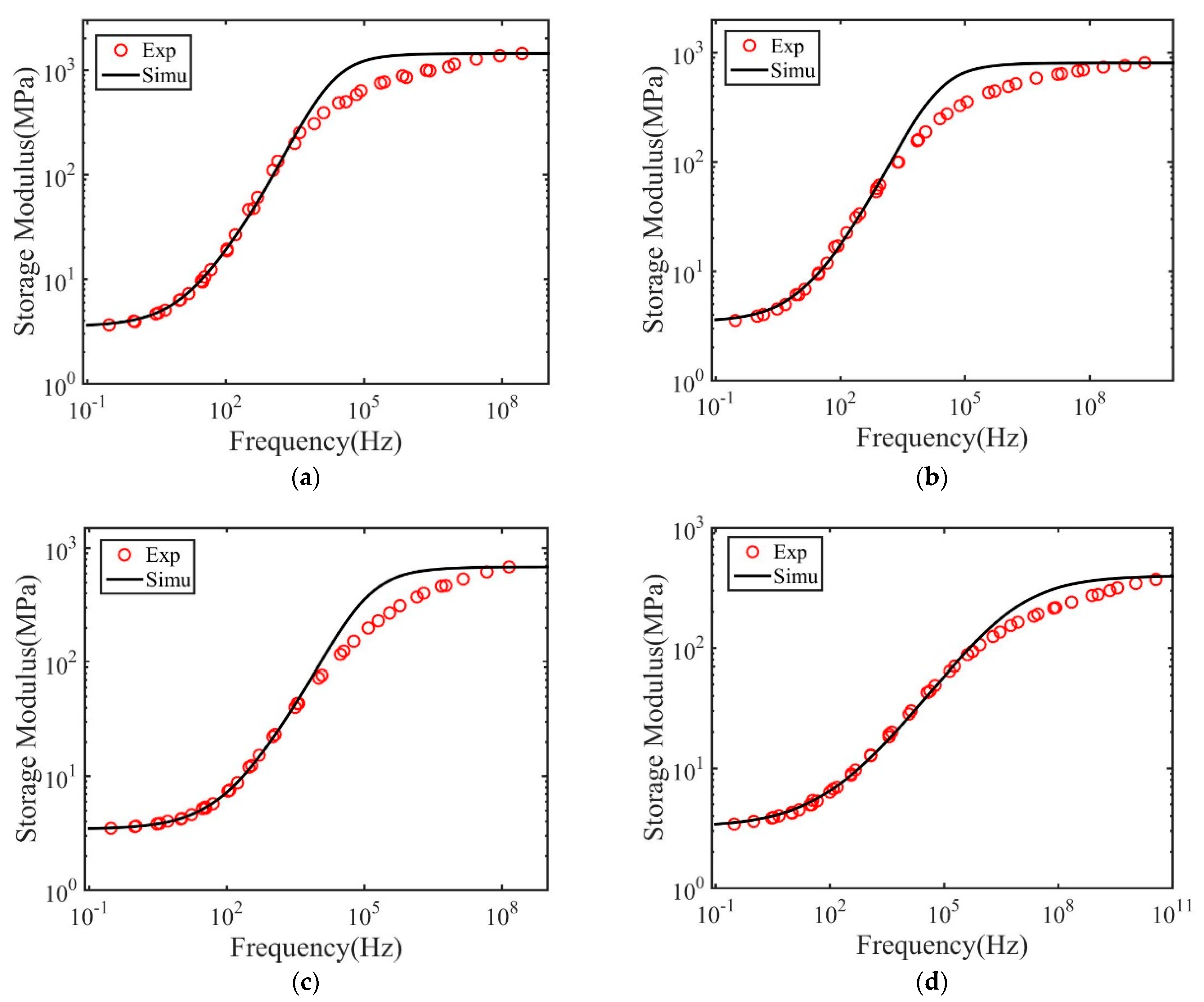