In this study, various material compositions were designed to investigate the effect of mechanical reactions on cement-based materials according to the laser cutting speed. Table 1 lists the mix proportions of the cement-based materials used in this study. The materials used in the experiment were ordinary Portland cement, silica sand containing approximately 93 wt % of SiO2, undensified silica fume (grade 940U, Elkem) containing approximately 95 wt % of SiO2, silica powder containing approximately 98% of SiO2 with a median diameter of 3.15 μm, and a polycarboxylate-based superplasticizer with 25 wt % solid content by weight.
Three representative series of cement-based materials were prepared with a thickness of 50 mm and were named as LP, LM, and LU, indicating the use of cement paste, cement mortar, and UHPC for laser cutting, respectively. Furthermore, the LP and LM series names were suffixed with the water-to-cement ratio; for example, LP 0.4 indicates that a water-to-cement ratio of 0.4 is used. Different combinations of materials were set as variables to investigate their effects on laser cutting. The variables of the LU series were named in terms of the weight ratio of silica sand, silica powder, and silica fume. In addition, a superplasticizer was added to LM 0.25 and the LU series to ensure proper mixing by following previous research [19,20].

In this study, specimens were prepared by a planetary mixer. A fresh mixture was poured into molds (50 × 50 × 50 mm3) when the mixture showed proper viscosity. The specimens were covered with plastic sheets, and those were stored at room temperature for 24 h. Subsequently, the specimens were demolded and cured in a water tank maintained at 23 °C. After 24 h of drying in a laboratory environment, the compressive strength was measured following the ASTM C109 [21] at the age of 28 days. The compressive strengths listed in Table 1 were obtained by averaging the results calculated by measuring three specimens. In addition, in the laser cutting experiment, each specimen was used thrice at different laser cutting speeds. Figure 1 shows the experimental setup and an example of a tested specimen after laser cutting.
The experiment was performed using a 10 kW multimode fiber laser (IPG YLS-10000, IPG Photonics, Oxford, MS, USA) operating at a 1070 nm wavelength. The laser had a spot size of 150 μm, and N2 assist gas was maintained at a pressure of 7 bar. The specimen was placed on the testbed and fixed using a vice. The spacing of the testbed was set to 6.5 mm to facilitate the removal of the material discharged during the laser cutting. The focal point was set on the specimen surface, and the laser beam was irradiated vertically onto the specimen during the laser head movement. To collect dust particles during the laser irradiation, a ventilation duct was placed on the left side of laser device. The laser power was set at 9 kW, and the laser cutting speed was designated as the only controllable parameter in laser settings so as to simplify the experimental parameters. The laser cutting speeds were set as 0.25 and 0.5 m/min; in addition, speeds from 1 to 4 m/min in increments of 1 m/min were considered. Table 2 lists the laser cutting speeds and line energies used in the experiment.
The line energy, which was obtained by dividing the laser output power by the laser cutting speed and the laser spot size, was used to continuously monitor the irradiated laser energy per unit volume. Furthermore, the line energy was an important parameter used to understand the interaction between the laser and specimens. After the laser cutting (see Figure 2), specimens’ kerf width and penetration depth were observed using a digital microscope (AnMo Electronics Corp., New Taipei, Taiwan).
The kerf width and penetration depth were used to indicate the amount of materials that were removed by the laser processing. That is, the effect of the laser on the materials can be effectively evaluated according to the parameters set in the experiment. The kerf width and penetration depth represented the completely cut width of the specimens at the surface (top surface) and the measured depth of the specimen, respectively, under laser processing. The kerf width was measured at nine points for each case, and the maximum, minimum, and average values of the measured widths were evaluated. In addition, the penetration depth was measured using an additional specimen cut using a mechanical saw cutter with a blade thickness of 3 mm.

This study was conducted to investigate the applicability of laser cutting technology to cement-based materials using multimode fiber lasers. The experimental variation parameters were the material composition and laser cutting speed, which was set to 0.25, 0.5, 1, 2, 3, and 4 m/min. After laser irradiation, the top and cross-sectional views of cement-based materials were observed. Trends were analyzed by measuring the kerf width and penetration depth of the cement-based materials. To elucidate the elliptical hole observed in cross sections of the LP series, the focal and measured widths (top, middle, and bottom widths) were compared through graphs. The major observations and results of this study can be summarized as follows:
In the future, as an extension of the present study, the surface temperature should be measured during fast laser cutting for an accurate analysis of the interaction mechanisms between the laser and cement-based materials.

The research described herein was supported by the 2019 Research Fund (1.190015.01) of UNIST (Ulsan National Institute of Science and Technology). This work was also supported by the National Research Foundation of Korea (NRF) grant funded by the Korean government (MSIP; Ministry of Science, ICT and Future Planning) (No. 2017R1C1B507916 and No. 2019R1A2C1089644).

The research described herein was supported by the 2019 Research Fund (1.190015.01) of UNIST (Ulsan National Institute of Science and Technology). This work was also supported by the National Research Foundation of Korea (NRF) grant funded by the Korean government (MSIP; Ministry of Science, ICT and Future Planning) (No. 2017R1C1B507916 and No. 2019R1A2C1089644). The opinions expressed in this paper are those of the authors and do not necessarily reflect the views of the sponsors. 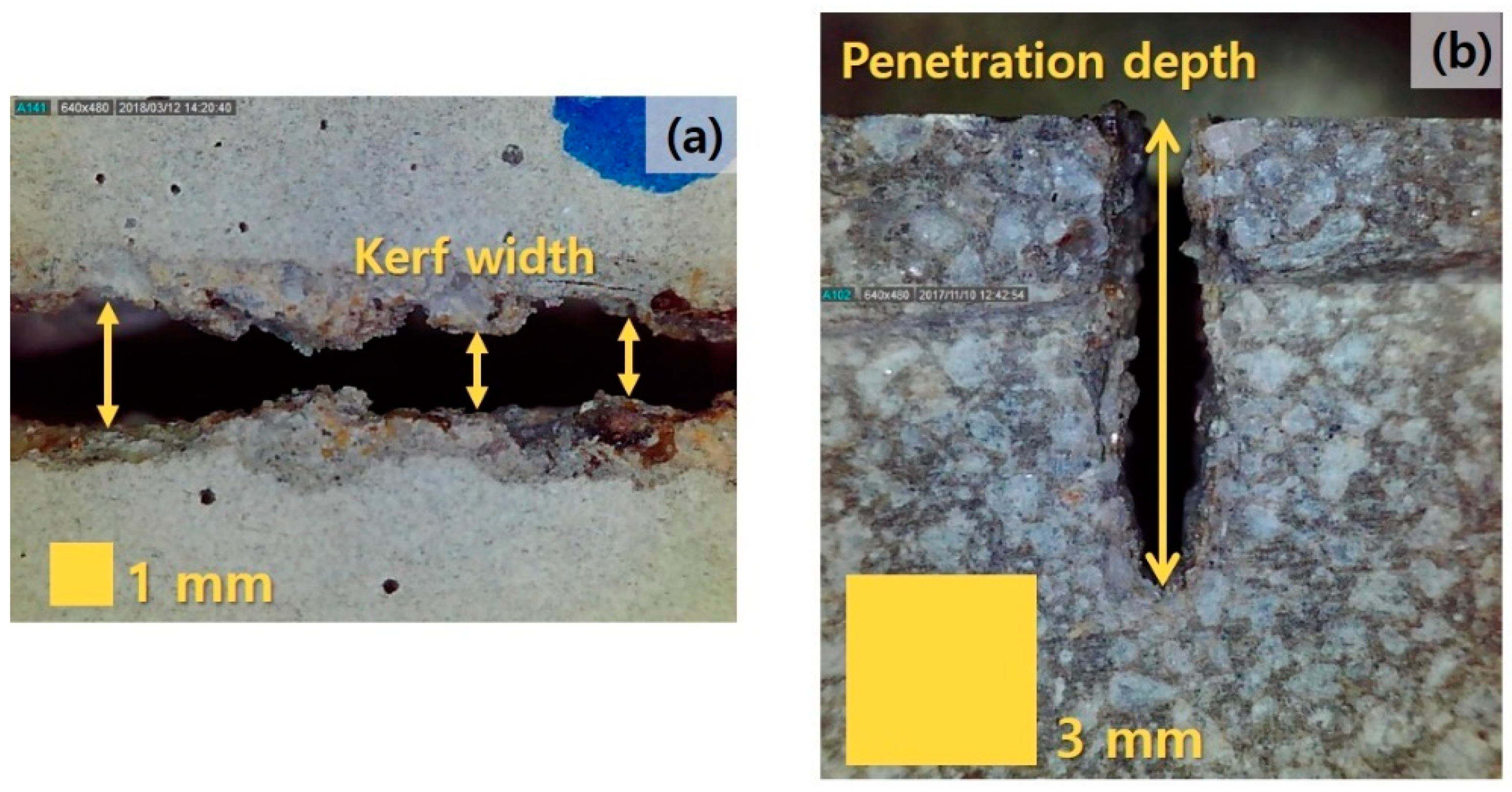 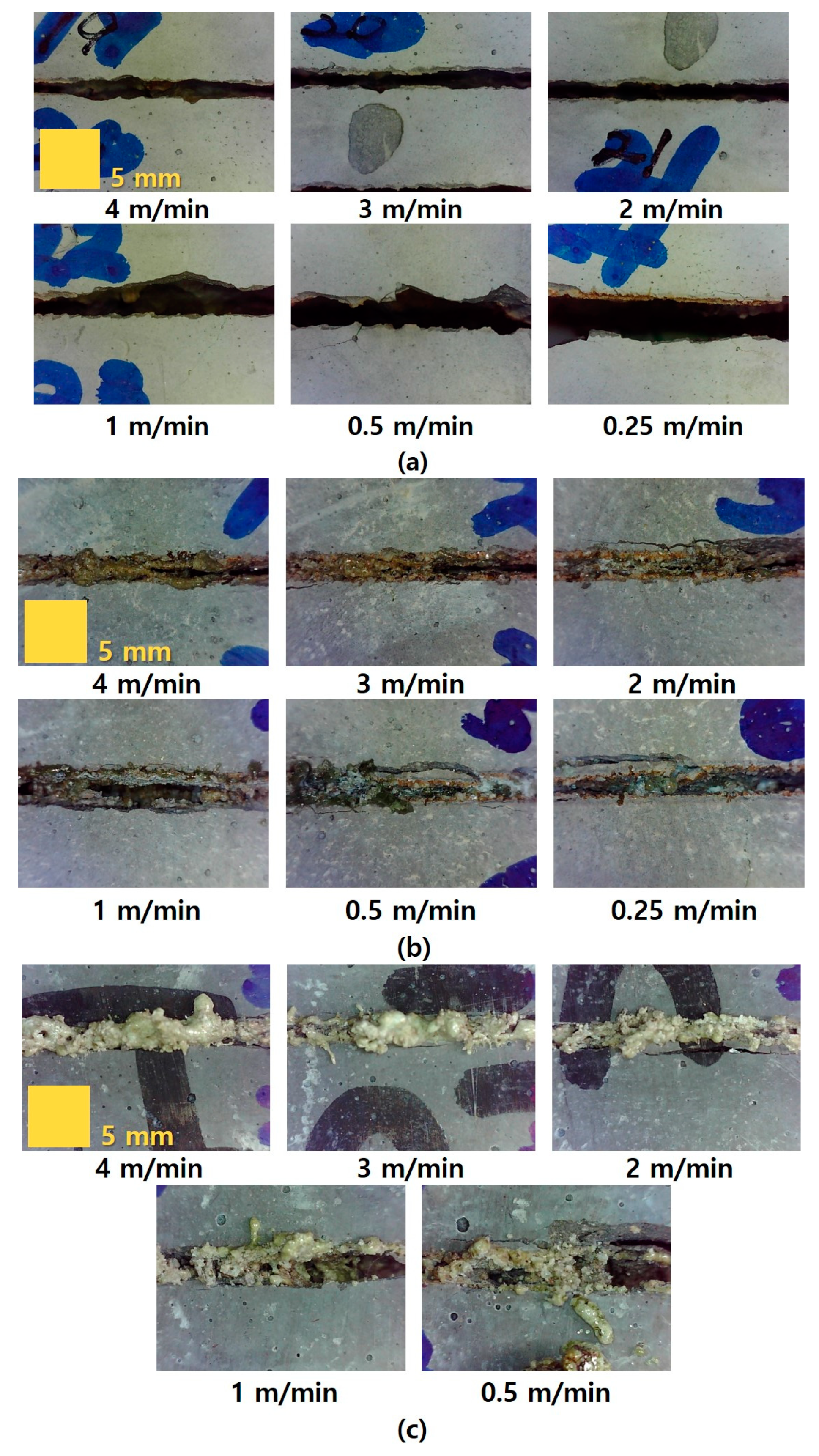 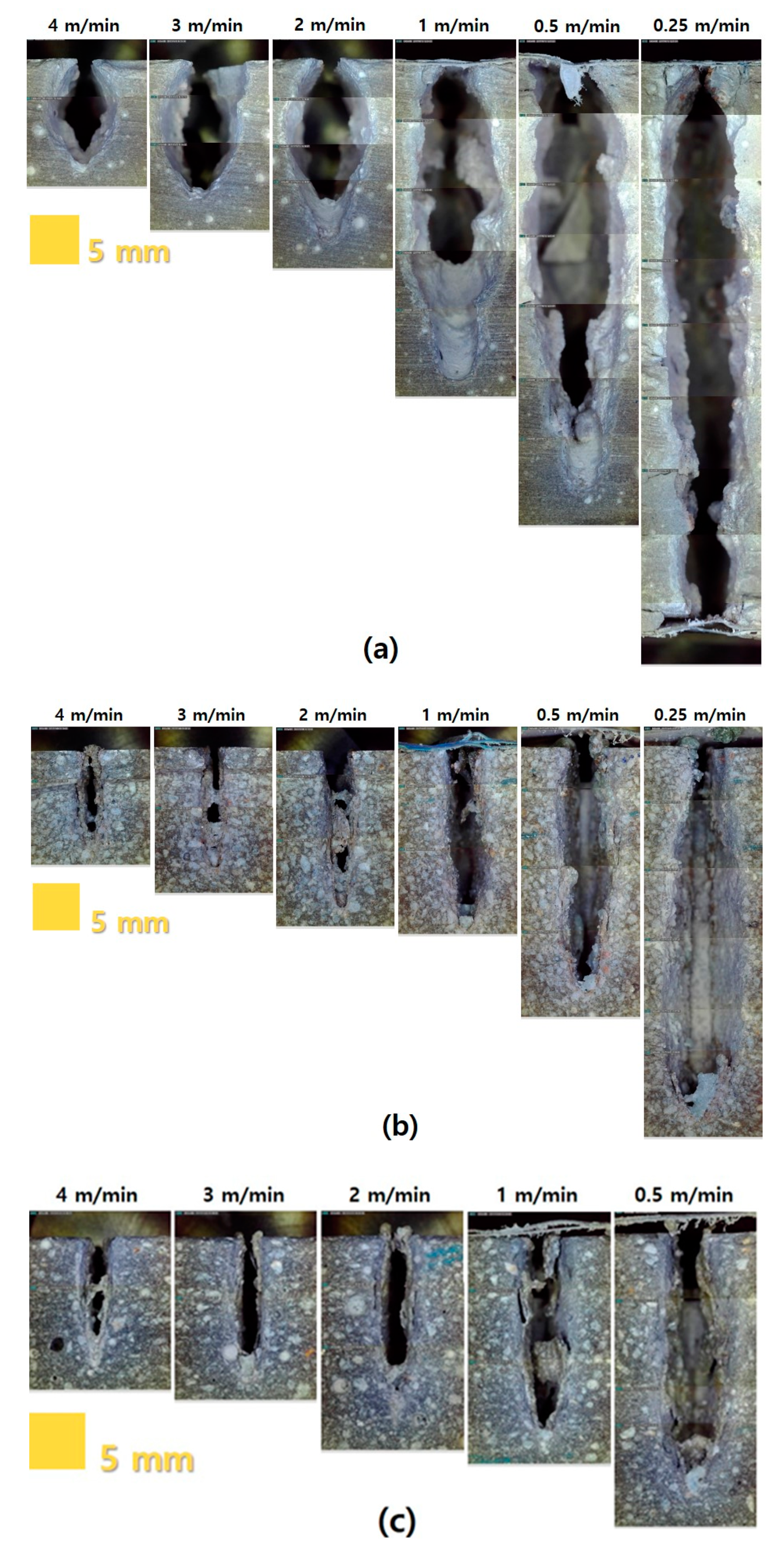 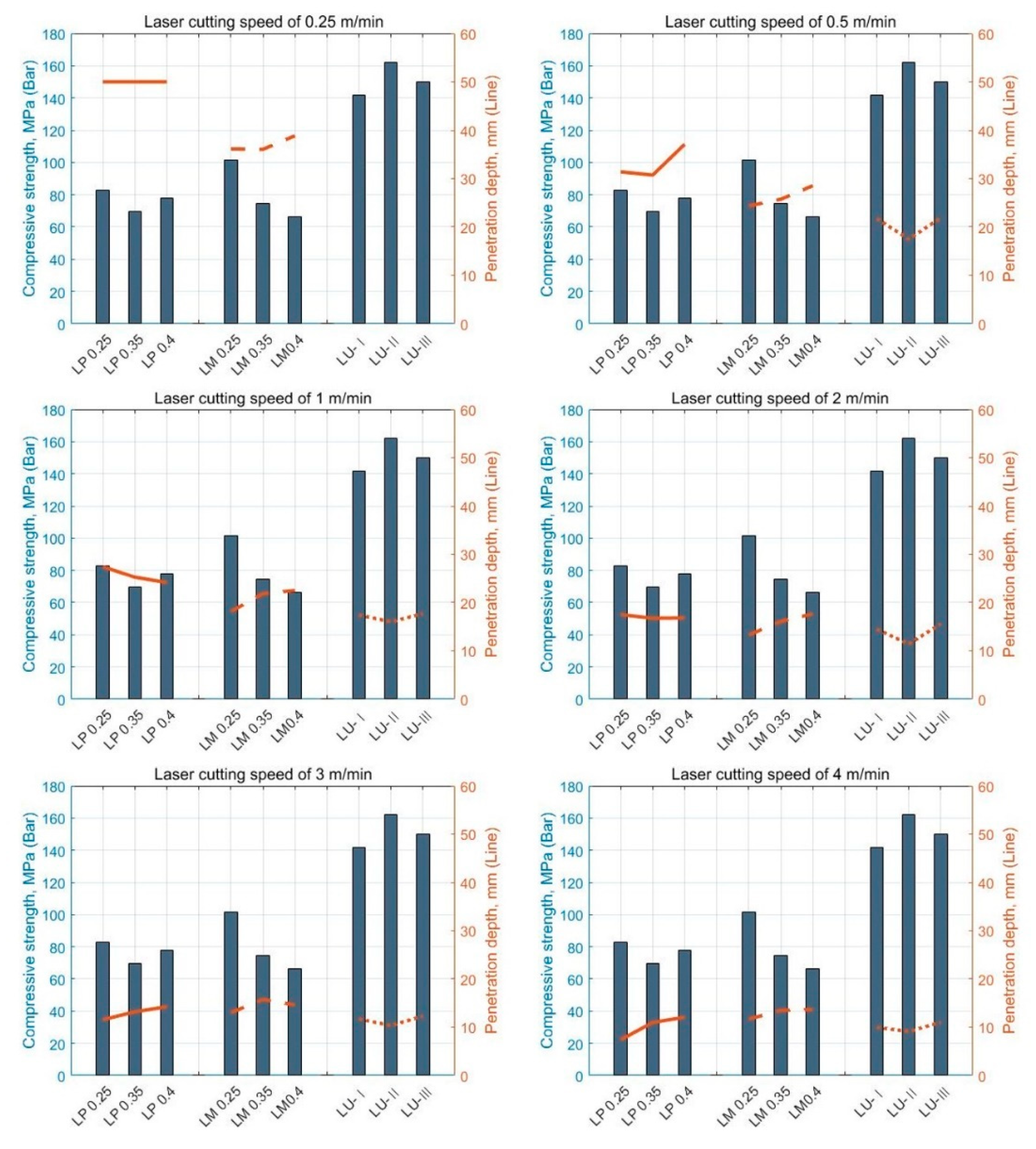 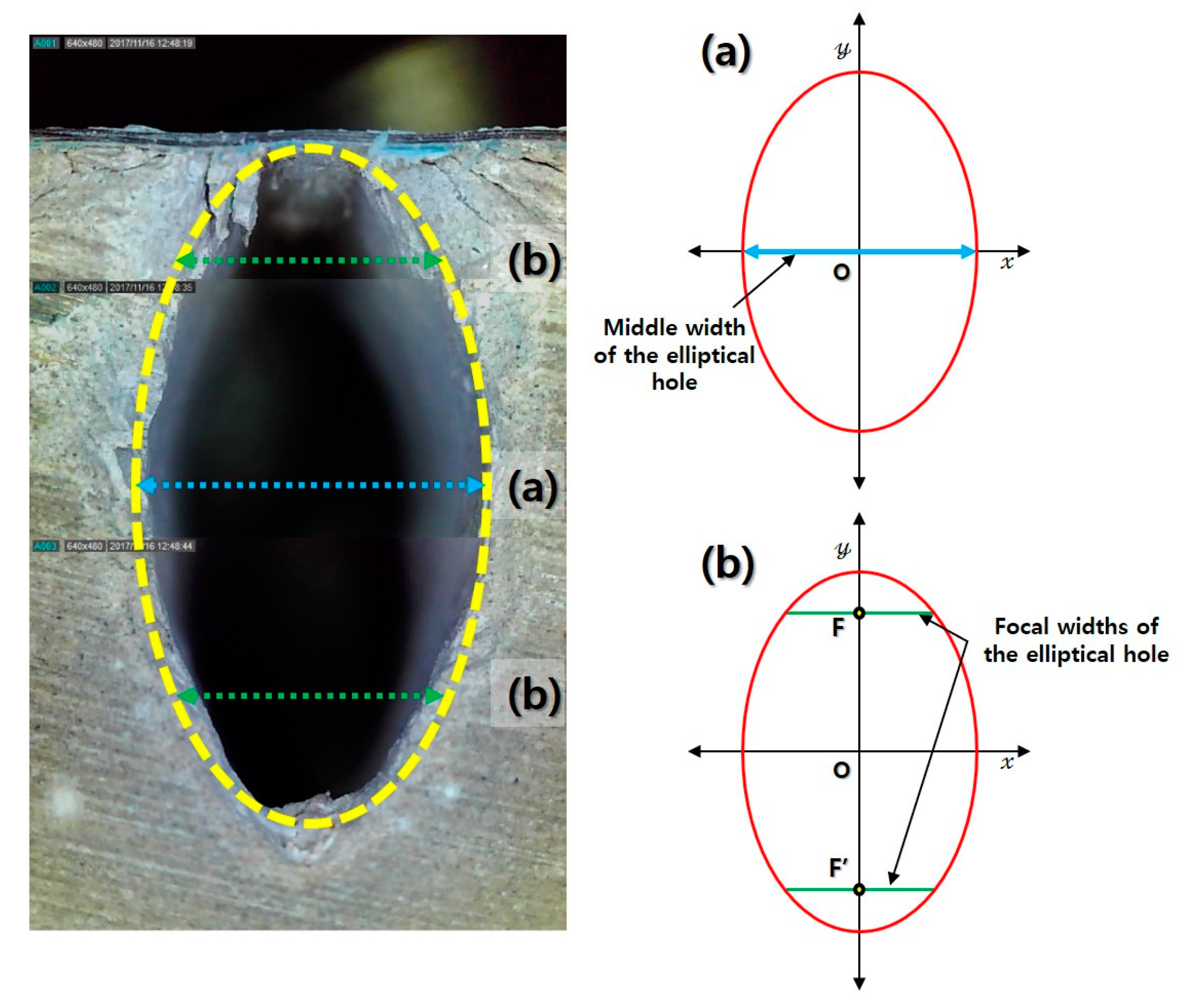 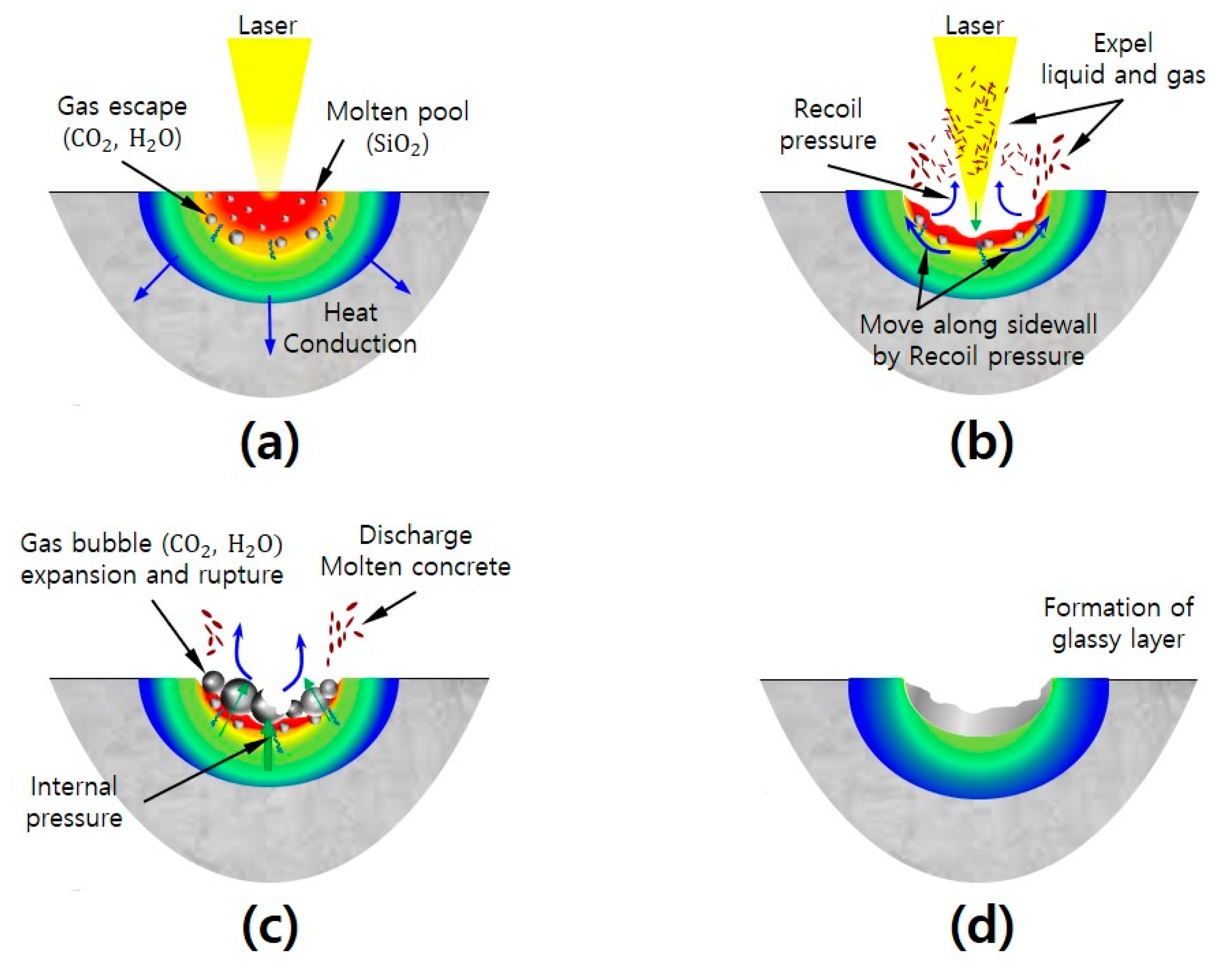