Modulus and Strength of Concretes with Alternative Materials

Parent concrete coming from a wide range of sources can result in considerable differences in the properties of recycled coarse aggregate (RCA). In this study, the RCAs were obtained by crushing the parent concrete with water-to-cement ratios (W/Cparent) of 0.4, 0.5 and 0.6, respectively, and were strengthened by carbonation and nano-silica slurry wrapping methods. It was found that when W/Cparen was 0.3, 0.4 and 0.5, respectively, compared with the mortar in the untreated RCA, the capillary porosity of the mortar in the carbonated RCA decreased by 19%, 16% and 30%, respectively; the compressive strength of concrete containing the carbonated RCA increased by 13%, 11% and 13%, respectively; the chloride diffusion coefficient of RAC (DRAC) containing the nano-SiO2 slurry-treated RCA decreased by 17%, 16% and 11%; and that of RAC containing the carbonated RCA decreased by 21%, 25% and 26%, respectively. Regardless of being strengthened or not, both DRAC and porosity of old mortar in RCAs increased with increasing W/Cparent. For different types of RCAs, DRAC increased obviously with increasing water absorption of RCA. Finally, a theoretical model of DRAC considering the water absorption of RCA was established and verified by experiments, which can be used to predict the DRAC under the influence of different factors, especially the water absorption of RCA. View Full-Text
Keywords: recycled coarse aggregate; pore structure; chloride diffusion; carbonation; nano-SiO2 slurry recycled coarse aggregate; pore structure; chloride diffusion; carbonation; nano-SiO2 slurry
►▼ Show Figures 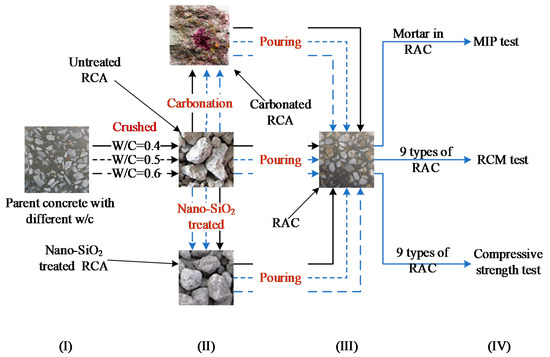