:
Cu-Al-Cu laminated composite was prepared with cold roll bonding process and annealing was carried out to study the phase evolution during the annealing process and its effect on the mechanical properties of the composite. The experimental results showed that after annealing the brittle intermetallics in the interface mainly includes Al4Cu9, AlCu and Al2Cu. With the increase of annealing temperature, the tensile strength of the composite decreases and the elongation shows a different variation which increases at the beginning and then decreases after a critical point. This phenomenon is related to the evolution of intermetallic compounds in the interface of the composite. It was also found that the crack source of the tensile sample is in the interface and delamination appeared at high annealing temperature (450 °C).
Keywords:
Cu/Al/Cu laminated composite; interface; intermetallics; tensile strength; elongation

Commercial aluminum alloy AA 1060 and pure copper (99.95%) sheets were used as components of the laminated alloys. The initial thicknesses of Cu and Al sheets are 1 mm and 2 mm, respectively. They were cut into specimens with 60 mm in width and 300 mm in length. After surface treatment (brushing and degreasing), Cu-Al-Cu sandwich sheet materials were subjected to cold roll bonding with different reduction ratios ranging between 40% and 80% to prepare Cu/Al/Cu clad sandwich composites. Figure 1a shows the schematic illustration of cold roll bonding process. The as-rolled laminates (with reduction of 80%, final thickness 0.8 mm) were annealed at 200, 250, 300, 325, 350, 400 and 450 °C, respectively, for 60 min in a resistance furnace with Ar protection. Then the annealed composite was further rolled to 0.4 mm with 3 passes. Peel strength of the laminated composite was measured using the peel test [19]. Peel test was performed using SHIMADZU tensile testing machine with a crosshead speed of 5 mm/min. Average peel strength (average load/bond width, N/mm) was used as the peel strength. The dimension of sample for peel test is width 10 mm and length 100 mm. Figure 1b shows the schematic illustration of the peel test.
Microhardness test was performed on the polished Cu-Al-Cu laminated composite by using a micro hardness tester (Cratos W50S, Bright, London, UK) and the load applied during the test was 10g. The average of three tests was used as the microhardness value of the corresponding area. The tensile test samples were selected along the rolling direction and the average of three tests was used as the value of tensile properties for each annealing condition.
The tensile test was carried out using SHIMADZU tensile testing machine (Shimadzu, Kyoto, Japan) with a crosshead speed of 2 mm/min at room temperature. The gage width and gage length for the testing specimen were 6 mm and 25 mm, respectively. SEM (scanning electron microscope), XRD (x-ray diffraction), EDX (energy dispersive x-Ray spectroscopy) and OM (optical microscope) were used to investigate the intermetallics in the interface.

3.1. Effect of Reduction on the Peel Strength of Cu-Al-Cu Laminated Composite

3.2. Effect of Annealing on the Intermetallics in the Interface

3.3. Effect of Annealing on the Mechanical Properties

X.F. and R.W., experimental work, microstructure observation, tensile test and preparation of manuscript; Q.Z., results analysis and discussion; P.W. and Y.Z., supervision of the whole work and manuscript revision. All authors have read and agreed to the published version of the manuscript.

The authors would like to thank Chao Sun and Wenxu Wang for their help in the experiment of cold rolling. 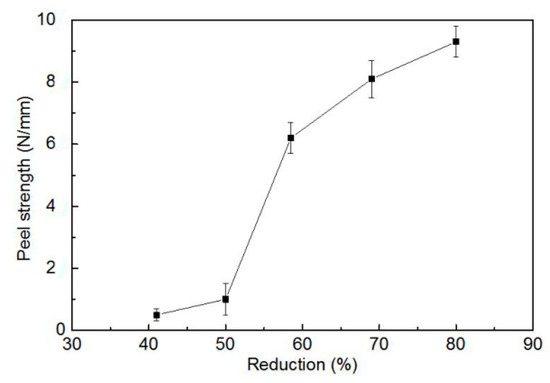 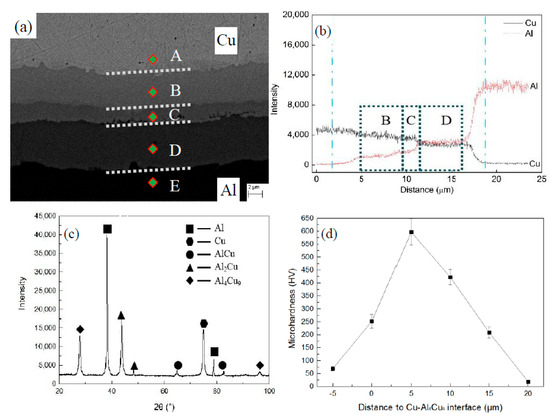 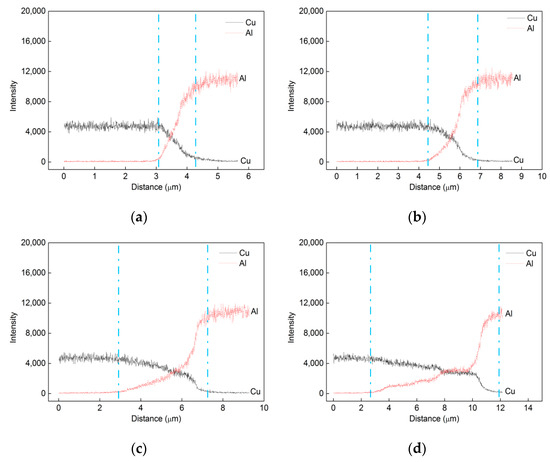 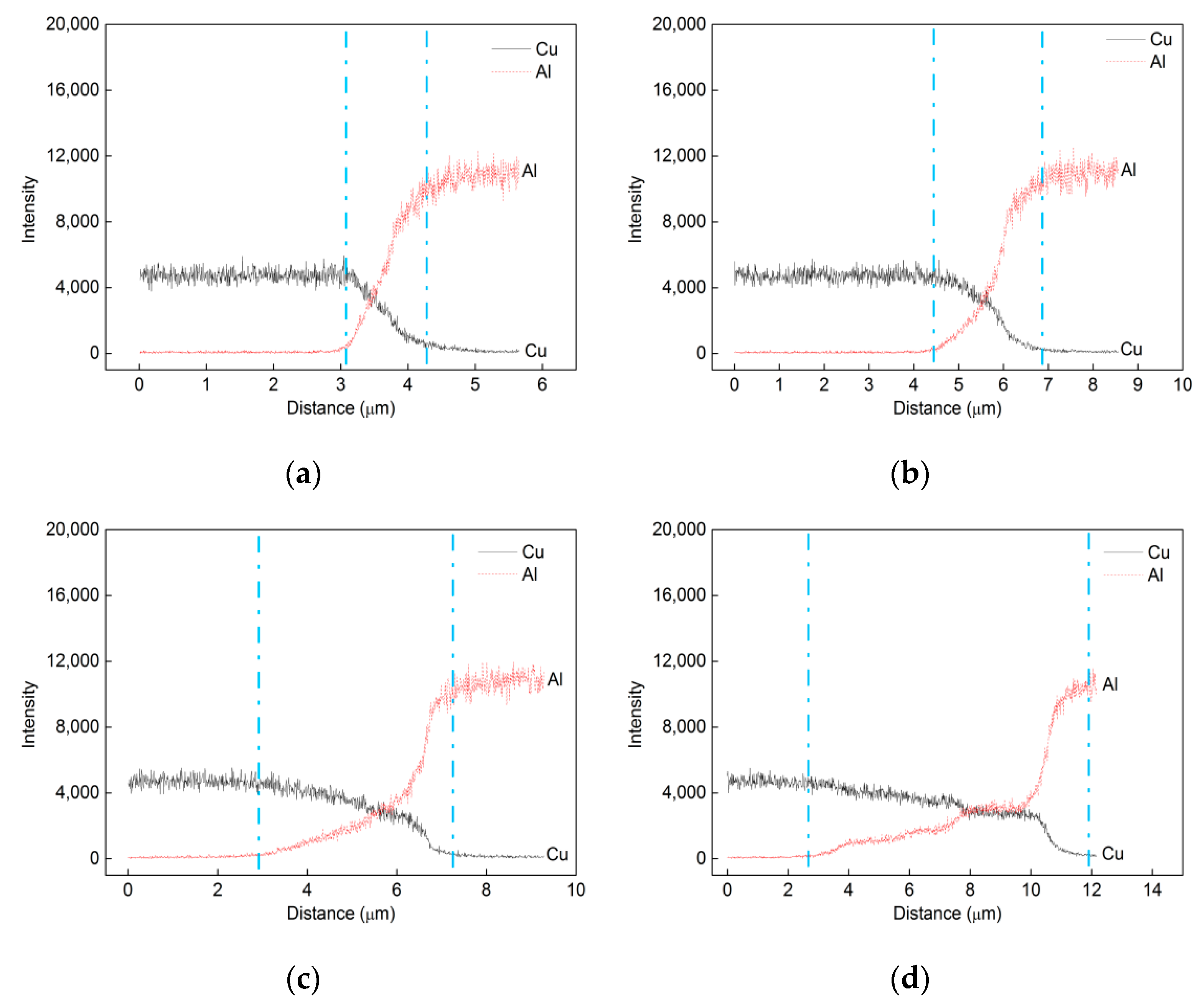 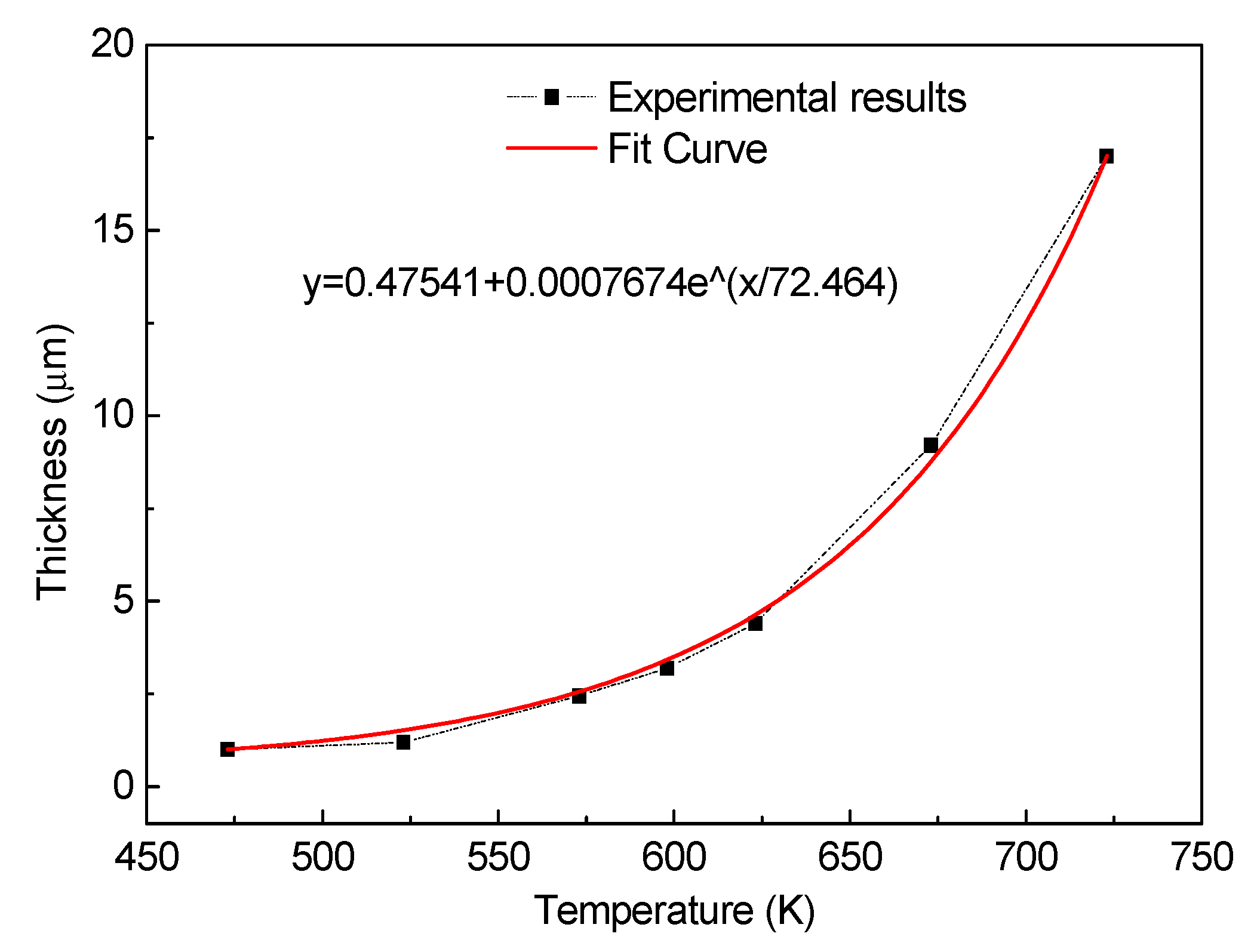