Recently, extracellular vesicles (EVs) and their contents have been revealed to play crucial roles in the intrinsic intercellular communications and have received extensive attention as next-generation biomarkers for diagnosis of diseases such as cancers. However, due to the structural nature of the EVs, the precise isolation and characterization are extremely challenging. To this end, tremendous efforts have been made to develop bionano sensors for the precise and sensitive characterization of EVs from a complex biologic fluid. In this review, we will provide a detailed discussion of recently developed bionano sensors in which EVs analysis applications were achieved, typically in optical and electrochemical methods. We believe that the topics discussed in this review will be useful to provide a concise guideline in the development of bionano sensors for EVs monitoring in the future. The development of a novel strategy to monitor various bio/chemical materials from EVs will provide promising information to understand cellular activities in a more precise manner and accelerates research on both cancer and cell-based therapy.
Keywords: biosensors; extracellular vesicle; nanoparticle; nanotechnology; optical sensor; electrochemical sensor biosensors; extracellular vesicle; nanoparticle; nanotechnology; optical sensor; electrochemical sensor

Recently, extracellular vesicles (EVs) (50–200 nm in diameter) have emerged as a new biomarker to diagnose disease progression and monitor treatment efficacy because of their vital role in cell–cell communication and molecular exchange [1,2,3]. These cell-derived membrane-enclosed vesicles are physically stable, abundant in biological fluids (e.g., >1010 EVs/mL of blood) and carry cell-specific cargos that are characteristic of their cells of origin, including proteins and nucleic acids (e.g., micro RNA (miRNA), messenger RNA (mRNA) and DNA) [4,5,6,7]. Typically, extracellular vesicles are enriched with a transport or fusion protein (e.g., caveolin-1), tetraspanins (e.g., CD63, CD9, CD81) and heat-shock proteins (Hsp 60, Hsp 70 and Hsp 90) due to the endosomal formation of vesicles [8]. Most of the nucleic acids (approximately 76% of the total oligonucleotides) inside EVs are non-coding RNAs (i.e., miRNAs), which are involved in many different roles and functions of cells as post-transcriptional gene regulators [9,10]. Furthermore, because EVs are actively secreted in large quantities by cells, they are promising biomarker candidates for the early diagnosis of diseases and sub-sequential monitoring of the therapeutic response from liquid biopsies in a minimally invasive manner [11].
Despite such clinical potential, the reliable isolation and analyses of EVs from complex biologic fluids are enormously challenging because of the small size and low density of these biomolecules, thereby necessitating an extensive sample preparation technique before measurements. Although ultracentrifugation remains the gold standard for isolation of extracellular vesicles, it still requires expensive instruments, tedious steps and may introduce some impurities [5,12]. Meanwhile, conventional analytical methods, including western blotting, enzyme-linked immunosorbent assay (ELISA) and flow cytometry, have also been facing technical hurdles owing to the limited sample volume, low sensitivity, and/or requirement of specialized high-end equipment [13,14,15,16,17]. For example, the quantification of EVs by ELISA has a limit of approximately 104 in 100-μL of the sample [18]. To improve the efficiency and sensitivity of EV isolation from a complex biologic fluid, various nanotechnology-based biosensors have been developed [19,20,21].
This review describes some of the current state-of-the-art developments in nanotechnology-based biosensor platforms for analyzing exosomal proteins and RNAs. These approaches are classified into four broad categories: surface plasmon resonance (SPR), colorimetric/fluorescence, Raman and electrochemical. The topics discussed in this review provide some insight into and guidelines for developing a nanotechnology-based EV characterization platform to promote the translation of EVs into clinical applications.

The SPR-based analytical method is an efficient platform for detecting and characterizing molecular interactions between biologic molecules [22,23,24,25,26]. This method monitors local refractive index changes generated by the resonant oscillation of stimulated electrons near the sensing surface (i.e., nanoscale metal materials) upon the binding of a ligand to a target molecule [27,28,29,30,31]. Owing to this simple and distinctive phenomenon, SPR-based biosensors have gained extensive attention to develop label-free and real-time biosensors with minimal sample preparation procedures [32,33,34,35,36]. Furthermore, as the dimension of EVs perfectly matches the sensing depth of SPR (200 nm), SPR-based biosensors are effective for quantifying EVs from complex biologic fluids [37,38,39,40]. In this section, recent studies related to SPR-based exosomal detection platforms are briefly introduced.
Qiu et al. utilized a nano-thick titanium nitride (TiN) film as an alternative plasmonic material in the SPR biosensing system for sensitive detection of EVs derived from malignant glioma cells (U251) (Figure 1A) [41]. Based on the high affinity between the TiN film surface and biotin, the TiN film was functionalized by biotinylated anti-epidermal growth factor receptor (EGFR) variant-III (EGFR vIII) antibodies or anti-CD63 to capture U251-derived EVs. Both an in vitro cell culture condition and serum were tested to validate the performance of the biosensor in a real sample condition (i.e., complex biologic fluid). The developed biosensor had a limit of detection (LOD) of 4.29 × 10−3-µg/mL for a general EV marker (CD63) and 2.75 × 10−3-µg/mL for the glioma cell-specific marker, EGFR vIII. Compared with well-known plasmonic metal materials, including gold (Au), TiN even demonstrated better sensitivity, while having a tunable plasmonic property in the visible to near-infrared spectrum range as well.
In addition to detecting classic antigen–antibody interactions, the SPR-based approaches have proved useful for the sensitive and selective determination of EVs based on aptamer recognition. For example, Wang et al. demonstrated how a sensitive aptasensor could be used for EV detection by SPR with controlled two-step hybridization of Au nanoparticle (NP)-assisted signal amplification (Figure 1B) [42]. Briefly, aptamer CD63 that targets the general EV surface marker CD63 was functionalized on surfaces of Au film to capture EVs. The addition of Au NPs modified with two different aptamers (CD63 and T30, where T30 is 5′-TTT (×10)-3′) led the first signal amplification by forming a sandwich structure “CD63-aptamer-modified Au film/EV/CD63 aptamer and T30-aptamer-modified Au NPs”. A second signal amplification was obtained by employing aptamer A30 (5′-AAA (×10)-3′)-functionalized Au NPs to capture the T30 sequence by the complementary base pairing procedure based on the A–T interaction. The consequent electronic coupling between (1) the Au film and Au NPs and (2) the Au NPs and Au NPs changed the local refractive index, separately, enabling dual-signal amplification. By utilizing this dual Au NP-assisted signal amplification, the authors achieved high sensitivity and low LOD (5 × 103 EVs/mL), corresponding to a 104-fold improvement compared with ELISA. Moreover, the developed SPR-based sensor system could detect the EVs in complex biologic fluids (30% fetal bovine serum) and differentiate the EVs secreted by two different cell lines (MCF-10A normal breast cells and MCF-7 breast cancer cells).
Alternatively, Im et al. reported an on-chip nanoplasmonic EV sensor (nPLEX) for high-throughput EV protein analysis based on the localized surface plasmon resonance (LSPR) mechanism [45]. The chip comprises an Au layer with periodic nanohole arrays functionalized with different antibodies for binding specific EVs and profiling of EV surface proteins and proteins present in EV lysates (71 protein biomarkers in ovarian cancer and benign cells were analyzed). In detail, the Au nanoholes were designed with a probing depth of less than 200-nm to match the size of the EV (<100 nm) to improve sensitivity. With target-specific binding of EV, the spectral intensity or shifts changes proportional to the target marker protein levels were successfully obtained, and the LOD of the nPLEX chip was estimated to be 3000 EVs/mL (670 aM). In addition, when samples from cancer patients were analyzed, ovarian cancer correlated with the expression of CD24 and epithelial cell adhesion molecule (EpCAM).
Thakur et al. used a self-assembled array of Au nanoislands to develop a sensitive and low-cost LSPR-based biosensors for detecting EVs isolated from A-549 cells, SH-SY5Y cells, blood serum and urine from a lung cancer mouse model (Figure 1C) [3]. The active structure of the Au nanoislands array was constructed by deposition and annealing procedures and utilized for the detection of EVs without any surface functionalization. The LOD of this sensor was 0.194 µg/mL. Similarly, Bathini et al. demonstrated an Au nanoislands-assisted EV detection system functionalized with a peptide called Venceremin (Vn96) [46]. Vn96 is a synthetic peptide with a strong affinity for heat-shock proteins on the surface of EVs. With a simple physical model, the optimum streptavidin–biotin–polyethylene glycol–Vn96 complex formation condition was achieved and experimentally optimized in agreement with the physical model. It was found that the surface of each Au nanoislands could accommodate nine EVs, resulting in 27 EVs/μm2.
In another example, Raghu et al. fabricated Au nanoplasmonic pillar arrays by combining nano- and microfabrication techniques for single EV detection (Figure 1D) [44]. By limiting the size of the individual elliptically shaped nanoplasmonic pillar similar to the size of an EV (approximately 100 nm), in situ EV binding events (secreted by MCF7 breast adenocarcinoma cells) were observed, even at sub-femtomolar concentrations. Recent studies of SPR-and LSPR-based analytical methods for detecting EVs are compared in Table 1. 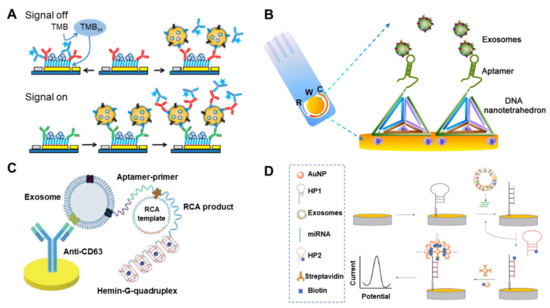