The use of hybrid manufacturing to produce bimodal scaffolds has represented a great advancement in tissue engineering. These scaffolds provide a favorable environment in which cells can adhere and produce new tissue. However, there are several areas of opportunity to manufacture structures that provide enough strength and rigidity, while also improving chemical integrity. As an advancement in the manufacturing process of scaffolds, a cooling system was introduced in a fused deposition modeling (FDM) machine to vary the temperature on the printing bed. Two groups of polylactic acid (PLA) scaffolds were then printed at two different bed temperatures. The rate of degradation was evaluated during eight weeks in Hank’s Balanced Salt Solution (HBSS) in a controlled environment (37 °C–120 rpm) to assess crystallinity. Results showed the influence of the cooling system on the degradation rate of printed scaffolds after the immersion period. This phenomenon was attributable to the mechanism associated with alkaline hydrolysis, where a higher degree of crystallinity obtained in one group induced greater rates of mass loss. The overall crystallinity was observed, through differential scanning calorimetry (DSC), thermo gravimetric analysis (TGA), and Fourier transformed infrared spectroscopy (FTIR) analysis, to increase with time because of the erosion of some amorphous parts after immersion. View Full-Text
Keywords: polymer crystallinity; bimodal scaffolds; fused deposition modeling; hybrid manufacturing; additive manufacturing polymer crystallinity; bimodal scaffolds; fused deposition modeling; hybrid manufacturing; additive manufacturing
►▼ Show Figures 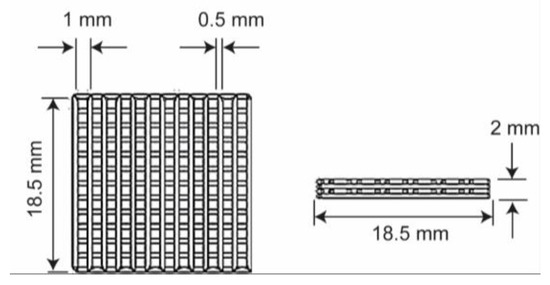