The objective of this work is to study the delamination of bismuth ferrite prepared by atomic layer deposition on highly oriented pyrolytic graphite (HOPG) substrate. The samples’ structures and compositions are provided by XPS, secondary ion mass spectrometry (SIMS) and Raman spectroscopy. The resulting films demonstrate buckling and delamination from the substrates. The composition inside the resulting bubbles is in a gaseous state. It contains the reaction products captured on the surface during the deposition of the film. The topography of Bi-Fe-O thin films was studied in vacuum and under atmospheric conditions using simultaneous SEM and atomic force microscopy (AFM). Besides complementary advanced imaging, a correlative SEM-AFM analysis provides the possibility of testing the mechanical properties by using a variation of pressure. In this work, the possibility of studying the surface tension of the thin films using a joint SEM-AFM analysis is shown.
Keywords: surface delamination; graphite substrate; atomic layer deposition; combined imaging; surface tension surface delamination; graphite substrate; atomic layer deposition; combined imaging; surface tension

The combination of bismuth ferrite (BFO) and highly oriented pyrolytic graphite (HOPG) has potential in the preparation of thin films with a magnetoelectric effect and an electrode in the form of multi-layer graphene [1,2]. The symmetry of bismuth ferrite allows the existence of a linear magnetoelectric effect. Bismuth ferrite is a G-type antiferromagnet and exhibits net magnetization when the film’s thickness is below 62 nm [3]. The observation of the magnetization in bulk samples is impossible because of the presence of a spatially modulated spin structure. The destruction of this feature can be achieved by both the replacement of bismuth ions by isovalent cations and the preparation of thin films [4,5,6]. Atomic layer deposition (ALD) was reported to be a reliable method for BFO deposition on silicon oxide/platinum (from Ferrocene (Fe(Cp)2) and Bi-triphenyl (Bi(ph)3) precursors) [7,8], on zinc oxide (from Bismuth (III) 2,3-dimethyl-2-butoxide and iron (III) tert-butoxide precursors) [9], silicon (from β-diketonate, tris (2,2,6,6-tetramethyl-3,5-heptanedionato) iron(III) (Fe(TMHD)3) and Bi(TMHD)3 precursors) [10] and strontium titanate (from Bi(thd)3 and Fe(thd)3 precursors) [11]. Besides the variation in precursors, ALD methods for BFO differ by the combination of cycles [12,13], possible plasma enhancement of the deposition [14], different temperatures of the process [15] and post-treatment [16].
Swelling and bubble formation can be both an undesirable result of the film production process and an intentional surface modification, for example, by laser irradiation [17]. The formation of swelling and bubbles is possible both in heterostructures and in materials of the same chemical composition.
The focus of this work is on using simultaneous scanning electron microscopy (SEM) and atomic force microscopy (AFM) for the description of delamination areas. SEM and AFM are the most popular methods in material science for the study of surface appearance. They allow the diagnostics and investigation of the surface and near-surface area in high resolution. In the case of correlative SEM-AFM microscopy, SEM provides both imaging and navigation through the region of interest. The same sample can be subjected to AFM measurement for nanoscale data acquisition on the surface height. Installing AFM in SEM has several advantages, protecting the device from acoustic vibrations, thermal drift and other noise exposure in the chamber of an electron microscope.
The investigation of delaminations is of interest to both practical applications and the detection of rare physical effects in this structure. In the near-surface region of the substrate, significant residual stresses arise due to the formation of highly nonequilibrium nanostructured and nano-phase states. The patterns of formation of such states are not well studied yet.

A commercial sample of highly ordered pyrolytic graphite (HOPG), 7 mm × 7 mm, ZYA grade was used. The samples were purchased from NT-MDT Spectrum Instruments (Zelenograd, Russia). The processing of the substrate material is important for the preparation of heterostructures [18]. The upper layers of the HOPG were mechanically exfoliated using 3M adhesive tape, and the freshly prepared sample was immediately placed via a vacuum feedthrough into a high vacuum chamber with a residual gas pressure of 10−7 Pa.
An ALD set-up ALDCERAM ML-200 (ALDCERAM, LLC, Boulder, CO, USA) was used for the preparation of Bi-Fe-O films. To obtain the Bi-Fe-O composition, Bi(mmp)3 (mmp = 1-methoxy-2-methyl-2-propanolate, Sigma-Aldrich spol. s r.o., Prague, Czech Republic) was used as the source of Bi. Ferrocene (Fe(C5H5)2, Sigma-Aldrich spol. s r.o., Prague, Czech Republic) realized the Fe component. In the time interval between letting the precursor into the chamber, ozone was supplied for 4 s. A purge was carried out with N2 carrier gas of 99.999% purity.
The evaporation temperature of Bi(mmp)3 was in the interval of 408–418 K. It provided sufficiently reproducible impulses of precursors. The optimum temperature for the evaporation of the ferrocene precursor was 364 K [19]. The reason was that Bi (mmp)3 provided a higher growth rate than Fe(C5H5)2. The growth rate was ~0.12 nm/super cycle. For the homogeneous mixing of the resulting Bi-Fe-O layer, the layer growth of BiOx and FeOx compounds was carried out in a single technological cycle. The initial layer was 150 cycles of BiOx, with a super cycle of Bi(mmp)3 input at 1.2 s. Then, a layer of FeOx was deposited during 150 cycles. The super cycles of the intake of Fe(C5H5)2 took 2 s each. The inlet gas pipelines transporting the precursors were at 423 K [19]. The substrate was placed 4 cm from the inlet. The chamber was heated uniformly to 523 K and the outlet gas was kept at a constant temperature of 423 K.

A qualitative analysis of the samples in depth was carried out by secondary ion mass spectrometry (SIMS) using a TOF-SIMS5 set-up (IONTOF, Muenster, Germany). Depth profiling was performed using a Bi+ 30 kV analysis beam of 200 μm2 area and O2+ 500 V for sputtering. The O2+ beam also had a signal intensity enhancing effect. Raman spectroscopy was carried out on a confocal Raman imaging system Alpha 300 R (WITec, Ulm, Germany) using a 5 mW and 532 nm irradiation laser. The additional study of the surface composition was carried out by an AXIS SupraTM X-ray photoelectron spectrometer (XPS) (Kratos Analytical Ltd, Manchester, UK). A cluster source of argon ions was used for depth profiling with the following characteristics: 5 keV Ar500+, 2 mm × 2 mm etching area, 5 s of pre-etching and post etching time, 1800 s etching time of one circle. The reason for the low energy and long time of etching was the prevention of the preferential etching of oxygen. The data were processed by CasaXPS v.2.3.23 software (Casa Software Ltd, Wilmslow, UK).
A correlative SEM-AFM analysis was carried out using a scanning probe microscope. LiteScopeTM (NenoVision, Brno, Czech Republic) integrated to SEM Lyra 3 (Tescan, Brno, Czech Republic). Topography detection was, in this case, performed by self-sensing tuning fork probes which detected the change in their resonance properties due to the change in distance to the sample. The chamber pressure during measurement was 10−2 Pa. When measured in air, the pressure was normal and equal to 101,325 Pa. The scanning of the topography at atmospheric pressure was carried out immediately after scanning in vacuum. This allowed avoiding excessive pollution from outside and accidental jumps to another area, which could be the result of mechanical manipulations.

Correlative SEM-AFM allows the fast and easy comparison of images from both techniques. The localization of the region of interest using SEM allows one to quickly focus on the surface of the sample by selecting the desired scan area (Figure 6a). The height of the “bubbles” changed at vacuum and was greater than in air. This is due to the high gas content in them. To confirm the reliability of the results, the depth of the craters—formed at the places where the film was no longer—was measured. It remained virtually unchanged both in vacuum and at normal pressure. The difference was a slight decrease in the noise signal when measured in vacuum (Figure 6b).
At certain values of the electron beam parameters, a thin film of the material can be transparent (Figure 7). In the images presented in this work (Figure 7a,b), under the transparent film the topography elements of the lower layers were visible. AFM makes it possible to determine the height of the transparent (under the given SEM conditions) nanoscale layer (Figure 7c). The high sensitivity of the AFM in vacuum allows us to accurately determine the height of the material located on the substrate (Figure 7d).

In this work, the results of studying the exfoliation of Bi-Fe-O film from the HOPG surface are presented. An increased interest in multiferroics led the researchers to investigate their combination with other prospective materials. The results aim to fill the space in the field of bismuth ferrite preparation on graphite substrates. The observed film delamination effect can be used to further obtain 2D nano-dimensional materials by the mechanical (for example, ultrasonic) collection of exfoliated flakes.
The results show that simultaneous SEM-AFM contributes to obtaining structural information from local regions as morphological, geometric, physical and chemical characteristics. This is important for a better understanding of the many aspects of material science, such as defects, phase transformations, etc., and the correct interpretation of surface topographic features, as well as its functional role in the testing of the surface in relation to material performance and lifetime.

This research was supported by the Ministry of Industry and Trade of the Czech Republic, MPO-TRIO project (grant number FV10618). The research infrastructure was funded by the Czech Academy of Sciences project RVO:68081731. The research described in this paper was also financially supported by the Ministry of Education, Youth and Sports of the Czech Republic under the project CEITEC 2020 (grant number LQ1601), by the Technology Agency of the Czech Republic (project no. TJ01000434) and by the Internal Grant Agency of Brno University of Technology (grant no. FEKT-S-20-6352). A part of the work was carried out with the support of CEITEC Nano Research Infrastructure (grant ID LM2015041, MEYS CR, 2016–2019), CEITEC Brno University of Technology.

The authors declare no conflict of interest. The funders had no role in the design of the study; in the collection, analysis, or interpretation of data; in the writing of the manuscript; or in the decision to publish the results. 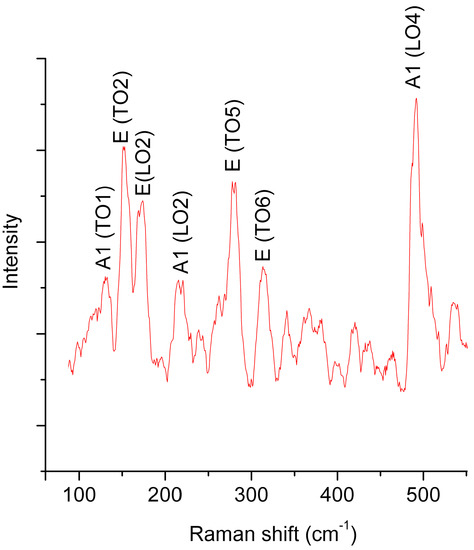 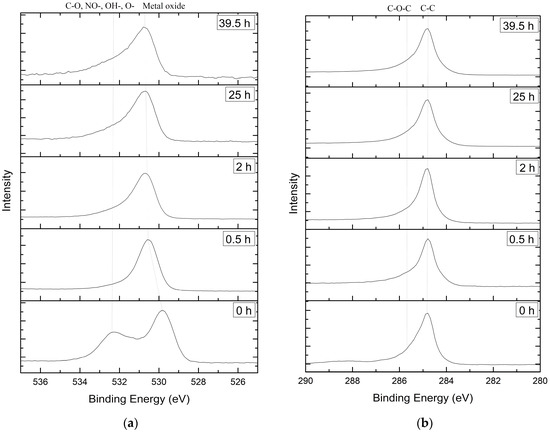 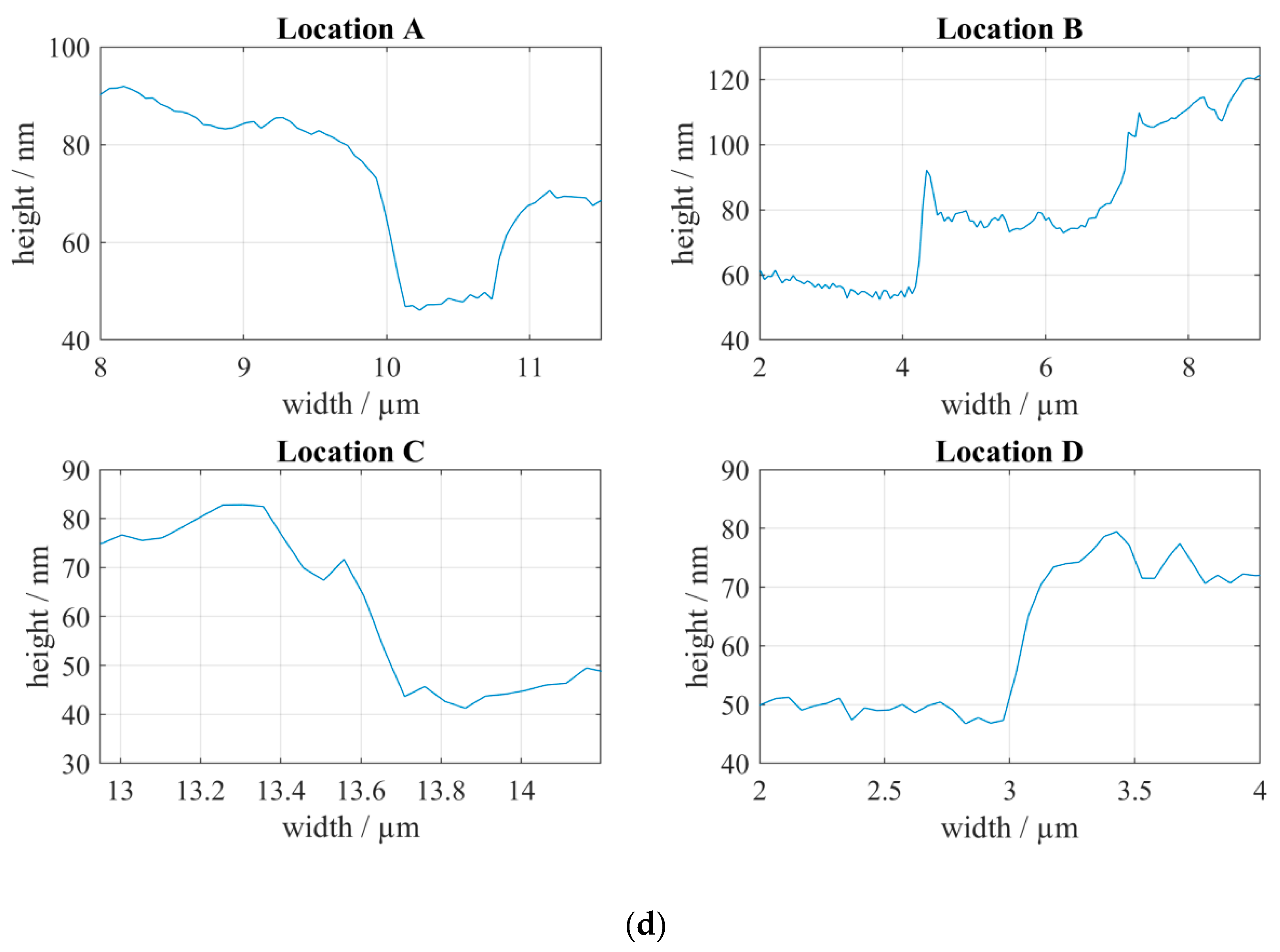