Nanofibers can be produced by electrospinning diverse polymers or polymer blends [1,2,3]. Generally, different technologies can be applied, such as the common needle-based one in which a polymer solution or melt is pressed through a needle into the electric field [4,5,6], wire-based techniques [7,8,9], cylinder-based one [10] and diverse other geometries of spinning electrode and substrate. Such nanofiber mats can be used for a broad variety of applications, such as air or water filtration [11,12,13], biotechnology and biomedicine [14,15,16,17], batteries and solar cells [18,19,20], etc.
Typically, such nanofiber mats contain arbitrarily oriented nanofibers. For several applications, however, aligning them would be supportive. In the literature, different approaches can be found to reach this goal. Often a high-speed rotating collector is used [21,22,23], but fiber orientation can also be reached by using a pair of blades as the collector [24,25] or stretching the electrospun mat in ethanol [2].
Especially for the case of magnetic nanofibers, a magnetic field-assisted electrospinning process was suggested to create oriented nanofibers [26,27,28]. A high alignment is of great interest for magnetic nanofibers to create a high magnetic anisotropy, based on the shape anisotropy of such fine nanofibers [29,30,31]. Aligned electrospun magnetic nanofibers may also close the gap between fully determined nanofibers, as used in the racetrack memory [32], and arbitrarily oriented magnetic nanofibers [33], to enable stochastic behavior in biologically-inspired neuromorphic computing [34]. On the other hand, such aligned magnetic nanofibers were shown to have high longitudinal elasto-magnetic strain and transverse magnetic deflection, making them useful for microelectronic or biomedical applications in which deformations occur or a magnetic anisotropy is necessary [26]. They can be used in situ as scaffolds that topographically guide cell growth, e.g., of neurites [35] or mesenchymal stem cells [36] growing significantly farther and better aligned on such aligned fibers than on a pure hydrogel. On the other hand, tensile strength and thermal conductivity of such nanofiber mats or corresponding nano-composites were found to be significantly enhanced due to fiber alignment [37]. Aligned magneto-mechanically spun nanofibers showed a high stretchability and a fast and reproducible pressure response, making them well suited as pressure sensors in stretchable devices [38].
Adding a magnetic field or working with a rotating cylinder, however, is often not possible especially in commercial electrospinning devices with usually high safety standards, impeding modifications of the interior. Here we report for the first time on another possibility to align magnetic nanofibers during electrospinning which can easily be applied in many electrospinning devices. Due to the strong electric field in the spinning chamber, conductive lines applied on an isolating substrate lead to a fiber orientation perpendicular to the borders between conductive and isolating areas. We report on the influence of grounding the conductive lines, spinning duration and other spinning parameters.

Nanofiber mats were created by electrospinning in a “Nanospider Lab” (Elmarco Ltd., Liberec, Czech Republic), using a wire-based technology. The setup is shown in Figure 1. The carriage contains the spinning solution which flows through a spinning nozzle. In this way the lower wire is coated with polymer solution. Since a large positive voltage is applied to the lower wire, while the upper wire is grounded, a strong electric field is created in the spinning area which is usually strongest in the middle, between the two wires. Along the edges of the blue-marked substrate, the electric field becomes non-uniform, resulting often in partly aligned nanofibers which can be recognized if the substrate is not moved during the experiments, as done here.
It should be mentioned that this electrospinning technology is not well-suited to prepare very long nanofibers in the range of several millimeters, as it is possible with the needle-based process [39,40,41]. Due to the usually isotropic arrangement and the interconnections formed between the fibers, length estimation of fibers spun by a wire-based technology is difficult and, to the best of our knowledge, not yet reported in the literature.
The spinning parameters for this study were: voltage between the wires 80 kV (with a positive voltage applied to the spinning wire and the other wire behind the substrate being grounded), nozzle diameter 0.9 mm (pure polyacrylonitrile nanofiber mats) or 1.5 mm (magnetic nanofiber mats), carriage speed 100 mm/s, substrate speed 0 mm/s, bottom electrode/substrate distance 240 mm, ground electrode / substrate distance 50 mm, temperature 24–26 °C and relative humidity in the chamber 31%–32%. Spinning was carried out for 10 min if not mentioned differently.
For the polymer solution, 16% polyacrylonitrile (PAN) (X-PAN, Dralon, Dormagen, Germany) were dissolved in dimethyl sulfoxide (DMSO) (min 99.9%, S3 chemicals, Bad Oeynhausen, Germany) and stirred for 2 h at room temperature on a magnetic stirrer. Magnetic Fe3O4 (magnetite) nanoparticles with particle sizes of 50–100 nm (Merck KGaA, Darmstadt, Germany) were added by manually stirring the solution for 10 min before dispersion in an ultrasonic bath for 30 min at 35 °C with a frequency of 37 kHz. The polymer:nanoparticle weight ratio was chosen as 1:1.56 which is in the range of a former test series [33] and thus known to be well spinnable. Pure PAN nanofiber mats were electrospun under identical conditions as a reference.
To produce conductive areas on the polypropylene (PP) non-woven which is commonly used as a substrate in the Nanospider Lab, copper tape (width 5 mm, purchased from dooppa, Hubei, China) was glued on the PP substrate, either parallel or perpendicular to the electrospinning wires, and in some cases grounded by connecting one of their ends electrically with the grounded electrospinning wire.
The resulting nanofiber mats were investigated by a digital microscope VHX-600D (Keyence, Neu-Isenburg, Germany), a confocal laser-scanning microscope (CLSM) VK-8710 (Keyence), a scanning electron microscope (SEM) Zeiss 1450VPSE (Oberkochen, Germany) and a camera Canon 1300D with a lens Tamron SP AF 17–50 mm F/2.8 XR Di II LD Aspherical [IF]. Investigations of fiber diameters, angular distribution and fast Fourier transform (FFT) evaluations were performed with ImageJ 1.51j8 (National Institutes of Health, Bethesda, MD, USA).

In this paper we report on the influence of a partly conductive substrate on wire-based electrospun magnetic nanofiber mats. Nanofiber diameters were increased by approximately a factor of 2, as compared to pure PAN nanofibers, by the addition of magnetite nanoparticles. We find that independent of the orientation of the conductive paths with respect to the electrospinning wires and a possible grounding of the copper tape, the first magnetic nanofibers are always oriented perpendicular to the borders of the conductive areas. FFT calculations and calculations of fiber angle distributions underline the strong fiber orientation along the borders of conductive areas. Elongated electrospinning, however, results in strong accumulation of the nanofibers in these regions which apparently disturb the magnetic fields responsible for the fiber orientation.
In the next experiments, this orientation process will be optimized to gain more highly oriented nanofibers by modifying the solution and spinning parameters as well as the geometry of the conductive paths. In addition, measurements of the magnetic properties will be carried out to investigate the magnetic anisotropy in addition to the optically recognizable fiber alignment.

This research was funded by Volkswagen Foundation grant “Adaptive Computing with Electrospun Nanofiber Networks” no. 93679. The APC is funded by the Open Access Publication Fund of Bielefeld University of Applied Sciences and the Deutsche Forschungsgemeinschaft (DFG, German Research Foundation)—414001623. 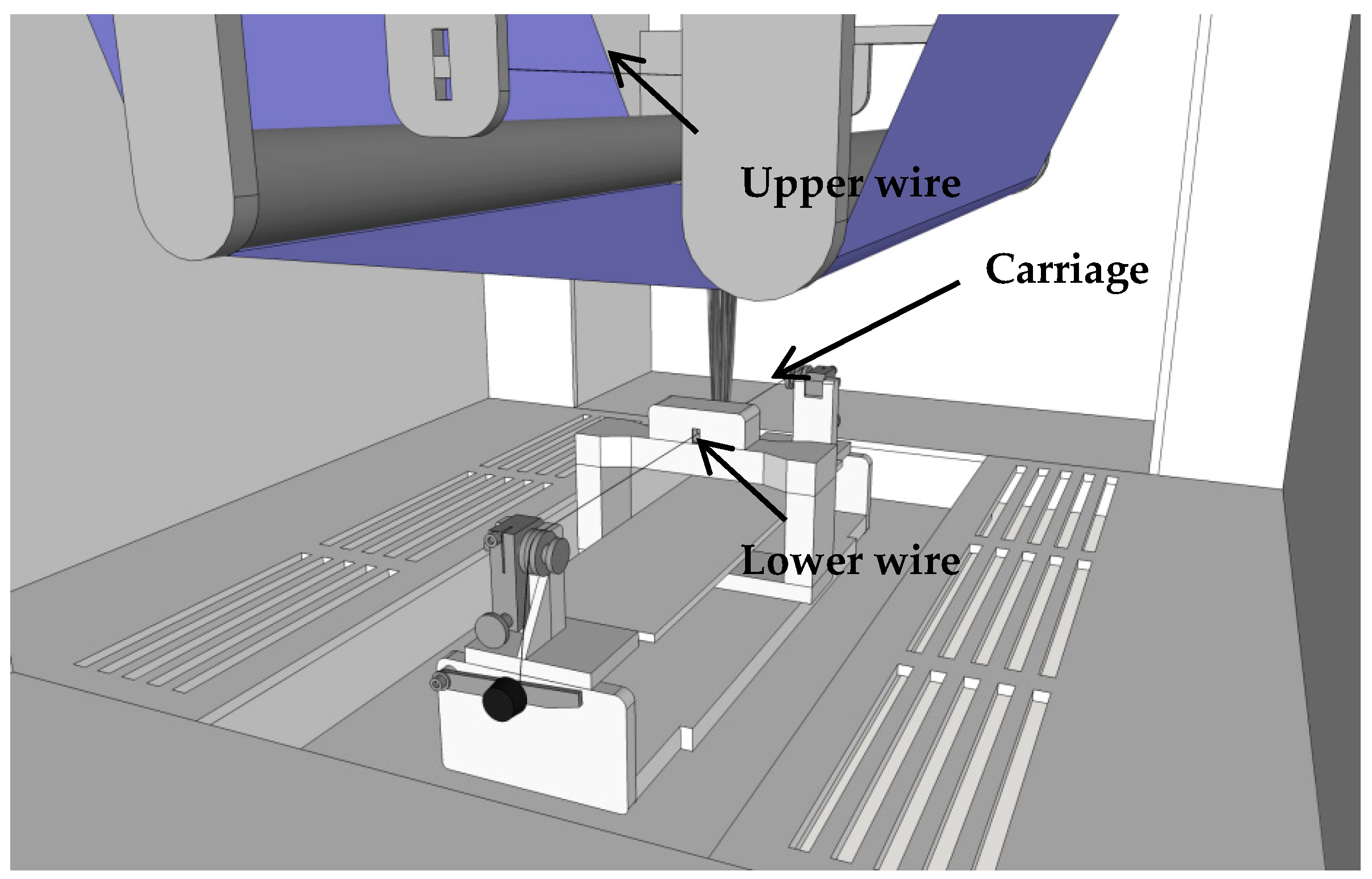 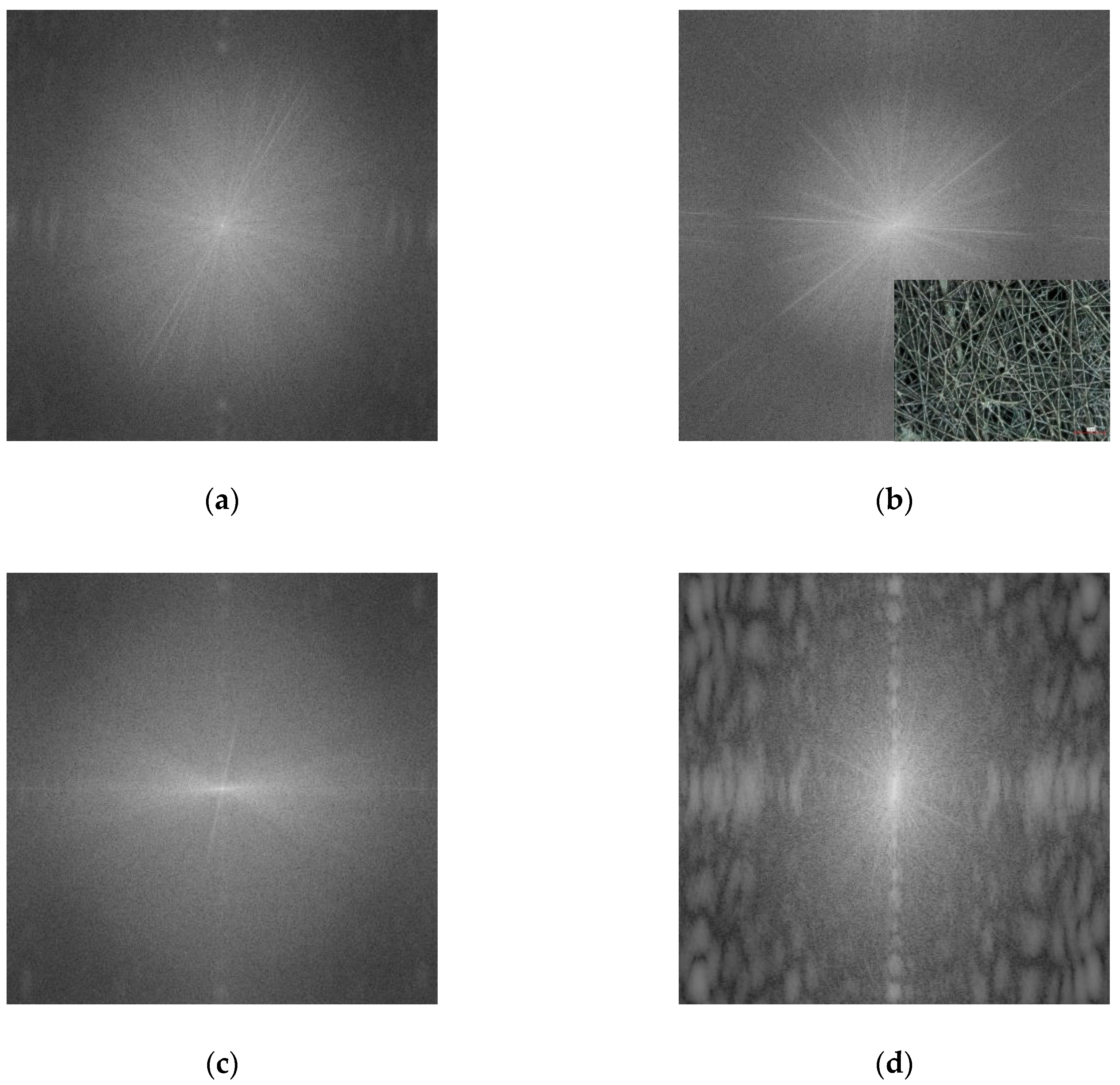