Taking advantage of a large light absorption coefficient, long charge carrier diffusion length and low-cost solution processing, all-inorganic halides perovskite CsPbBr3 quantum dots (QDs) are combined with a ZnO QD film to construct a high-performance photodetector. In this work, a novel photodetector device based on transistor structure with dual active layers composed of CsPbBr3 and ZnO film is proposed. In this structure, CsPbBr3 film functions as the light-absorbing layer and ZnO film acts as the conducting layer. Owing to the high electron mobility and hole-blocking nature of the ZnO QDs film, the photo-induced electron-hole pairs can be separated efficiently. As a result, the device exhibits high performance with response of 43.5 A/W, high detection up to 5.02 × 1011 Jones and on/off ratio of 5.6 × 104 under 365 nm light illumination. Compared with the ZnO-only phototransistor (the photodetector with the structure of transistor) the performance of the CsPbBr3 phototransistor showed significant improvement, which is superior to the majority of photodetectors prepared by perovskite. This work demonstrates that the ZnO QDs film can be applied in the photodetector device as a functional conducting layer, and we believe that the hybrid CsPbBr3/ZnO phototransistor would promote the development of low-cost and high-performance photodetectors. View Full-Text
Keywords: all inorganic perovskite quantum dots; ZnO QDs film; photodetector; transistor structure all inorganic perovskite quantum dots; ZnO QDs film; photodetector; transistor structure
►▼ Show Figures 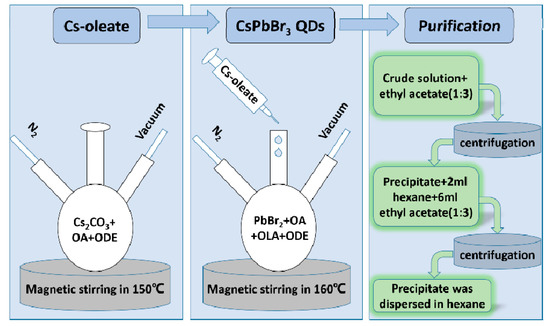