The main goal of this study was the formation of bone tissue using dexamethasone (DEX)-loaded [COCH3]-RADARADARADARADA-[CONH2] (RADA 16-I) scaffold that has the ability to release optimal DEX concentration under perfusion force. Bone-marrow samples were collected from three patients during a hip arthroplasty. Human mesenchymal stem cells (hMSCs) were isolated and propagated in vitro in order to be seeded on scaffolds made of DEX-loaded RADA 16-I hydrogel in a perfusion bioreactor. DEX concentrations were as follows: 4 × 10−3, 4 × 10−4 and 4 × 10−5 M. After 21 days in a perfusion bioreactor, tissue was analyzed by scanning electron microscopy (SEM) and histology. Markers of osteogenic differentiation were quantified by real-time polymerase chain reaction (RT-PCR) and immunocytochemistry. Minerals were quantified and detected by the von Kossa method. In addition, DEX release from the scaffold in a perfusion bioreactor was assessed. The osteoblast differentiation was confirmed by the expression analysis of osteoblast-related genes (alkaline phosphatase (ALP), collagen I (COL1A1) and osteocalcin (OC). The hematoxylin/eosin staining confirmed the presence of cells and connective tissue, while SEM revealed morphological characteristics of cells, extracellular matrix and minerals—three main components of mature bone tissue. Immunocytochemical detection of collagen I is in concordance with given results, supporting the conclusion that scaffold with DEX concentration of 4 × 10−4 M has the optimal engineered tissue morphology. The best-engineered bone tissue is produced on scaffold loaded with 4 × 10−4 M DEX with a perfusion rate of 0.1 mL/min for 21 days. Differentiation of hMSCs on DEX-loaded RADA 16-I scaffold under perfusion force has a high potential for application in regenerative orthopedics. View Full-Text
Keywords: hydrogel; RADA 16-I; dexamethasone; perfusion bioreactor; osteodifferentiation; human mesenchymal stem cells hydrogel; RADA 16-I; dexamethasone; perfusion bioreactor; osteodifferentiation; human mesenchymal stem cells
►▼ Show Figures 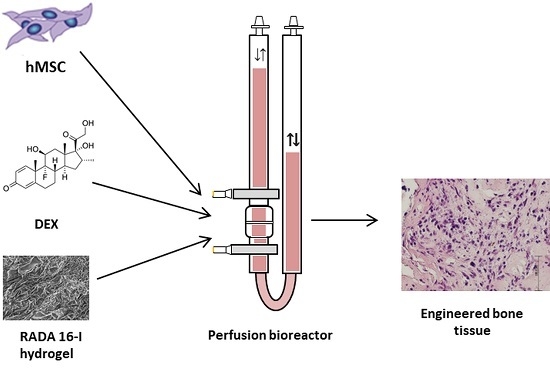