Optical brighteners (OBs) are colorless fluorescent dyes, widely used in industry to improve whiteness in materials. Nearly 80% of all OBs in the market are derivatives of stilbene. They absorb the near-ultraviolet light and re-emit most of it in the blue range as visible fluorescence. OBs are commonly applied on textiles, detergents, paper and plastic products, among others. OBs have a low degradation ratio. In biological plants, they can only be partially removed by adsorption into the sludge and a tertiary treatment could be required to fully remove them. Part of them may persist and can be found in river and lake waters. The current work aims to evaluate the effect of the OBs in the bacterial activity of biological wastewater treatment plants. The influence of two commercial OBs (Goldblanc BHA and Leucophor PC) on respiration rate was monitored by means of a semi-continuous electrolytic respirometer, in order to obtain information related to the growth of the biomass and the degradation of the substrate. Their acute toxicity was also determined. It was concluded that the OB effect on bacteria population is variable depending on its chemical structure. Unlike the former, the Leucophor-PC brightener had an impact on the respirometric rate. View Full-Text
Keywords: optical brighteners; bacterial activity; respirometry; biodegradability; textile wastewater optical brighteners; bacterial activity; respirometry; biodegradability; textile wastewater
►▼ Show Figures 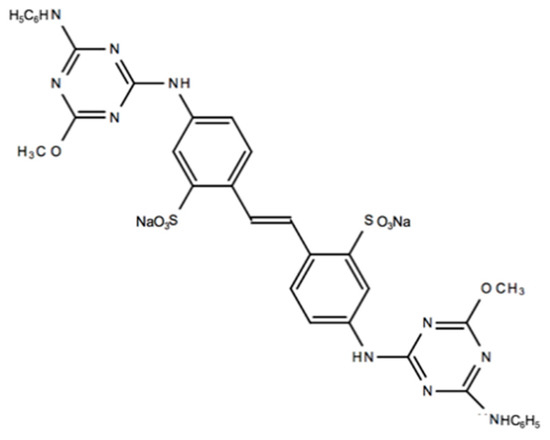