Thin fiber networks are widely represented in nature and can be found in man-made materials such as paper and packaging. The strength of such materials is an intricate subject due to inherited randomness and size-dependencies. Direct fiber-level numerical simulations can provide insights into the role of the constitutive components of such networks, their morphology, and arrangements on the strength of the products made of them. However, direct mechanical simulation of randomly generated large and thin fiber networks is characterized by overwhelming computational costs. Herein, a stochastic constitutive model for predicting the random mechanical response of isotropic thin fiber networks of arbitrary size is presented. The model is based on stochastic volume elements (SVEs) with SVE size-specific deterministic and stochastic constitutive law parameters. The randomness in the network is described by the spatial fields of the uniaxial strain and strength to failure, formulated using multivariate kernel functions and approximate univariate probability density functions. The proposed stochastic continuum approach shows good agreement when compared to direct numerical simulation with respect to mechanical response. Furthermore, strain localization patterns matched the one observed in direct simulations, which suggests an accurate prediction of the failure location. This work demonstrates that the proposed stochastic constitutive model can be used to predict the response of random isotropic fiber networks of arbitrary size. View Full-Text
Keywords: thin fiber networks; multi-scale modeling; stochastic volume element (SVE); mechanical failure; plastic softening; strain localization thin fiber networks; multi-scale modeling; stochastic volume element (SVE); mechanical failure; plastic softening; strain localization
►▼ Show Figures 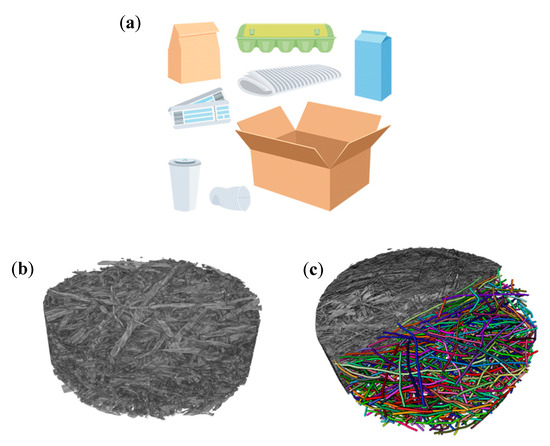