The purpose of this study was to compare the penetration ability of calcium silicate root canal sealers and conventional resin-based sealer using confocal laser scanning microscopy (CLSM). A total of 60 recently extracted single-rooted human premolars were used in this study. The root canals were prepared to a size 40/0.06 taper with ProFile rotary instruments and irrigated with NaOCl and EDTA. After drying all canals, the specimens were randomly divided into three experimental groups (n = 20): Group 1, gutta-percha (GP)/AH Plus with continuous wave compaction; group 2, GP/BioRoot RCS with a single-cone technique; and group 3, GP/Endoseal MTA with a single-cone technique. All experimental samples were sectioned perpendicular to their long axis using a low-speed diamond wheel at the apical, middle, and coronal third levels. The penetration abilities of all samples were evaluated using CLSM. A Kruskal–Wallis analysis and a series of Mann–Whitney U post hoc tests were performed. A higher intensity level was found in the coronal area and a lower intensity level in the apical area in all the experimental groups. The AH Plus group showed higher sum fluorescence intensity in the apical and coronal thirds compared with the BioRoot RCS and Endoseal MTA groups, whereas the BioRoot RCS group showed a higher intensity level in the middle third, similar to the AH Plus group. The maximum sealer penetration depth was low in the apical area and high in the coronal area in the AH Plus and Endoseal MTA groups. In the BioRoot RCS group, maximum sealer penetration was observed in the middle third. In conclusion, there were significant differences in sealer penetration pattern and distance according to the root level and sealer type. View Full-Text
Keywords: sealing ability; CLSM; calcium silicate sealer; resin-based conventional sealer sealing ability; CLSM; calcium silicate sealer; resin-based conventional sealer
►▼ Show Figures 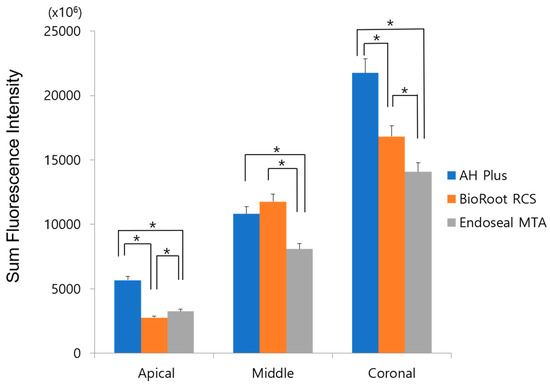