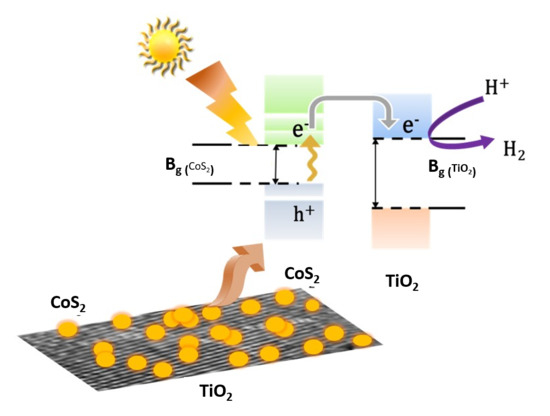 Depletion of fossil fuel deserves utilization of hydrogen as a renewable energy source. It could be one of the promising energy sources alternative to fossil fuels in meeting the energy demand of the current world population. Currently, the major hydrogen production is from steam-methane reforming and thermal cracking of natural gas, and coal gasification, which cannot alleviate the emission of greenhouse gases [1]. Electrolysis is another method, which is being used to produce hydrogen. Electrochemical reduction of water [2,3,4] is an ecofriendly method and exhibits high-purity (99.999%) of hydrogen [5]; in addition, this is a key to many clean energy technologies. Although there have been several methods used to produce hydrogen, photocatalytic hydrogen generation have gained much attention these days. This technique integrates solar energy collection together with water splitting, therefore, it is a more cost-effective method compared with the water electrolysis process. Unfortunately, only a small percentage of hydrogen is produced from the photocatalytic method under solar extended irradiation. Therefore, the development of new materials for sustainable hydrogen production is necessary to overcome the detrimental environmental impacts. In the past decade, different photocatalyst materials, such as TiO2 [6,7,8], ZnO [9], CdS [10,11], WS2 [12,13], mixed oxides [14,15], perovskites [16,17], dye and metal doped oxide materials [18,19] have been used as phototcatalysts for environmental remediation and energy production, such as water splitting applications. In particular, catalysts contain noble metals, such as Pt have also been utilized in the state-of-the-art hydrogen evolution reaction. However, large scale hydrogen production is limited with these catalysts [20,21,22]. Among the materials studied, TiO2 has been considered as the golden standard due to its significant characteristics that include photochemical stability, low toxicity, relative affordability, and ease of preparation [23]. Although the bandgap energy of TiO2 necessitates the use of UV irradiation, composites of TiO2 with co-catalysts, such as transition metal chalcogenides (TMCs), enable the catalysts to absorb visible light abundant in solar irradiation [24]. In this regard, TMCs have gained much attention among the research community in the field of lithium ion batteries, solar cells and hydrogen evolution, due to their significant characteristic features that include indirect bandgaps, optoelectronic properties and stability [24]. In addition, nanodots (quantum dots)/nano structures of these metal chalcogenides show stronger edge effects, and the quantum confinement effect make them suitable to be utilized under solar simulated irradiation [24,25]. The transition metal chalcogenides can be synthesized by employing different techniques, such as one-pot wet chemical method [10], impregnation–sulfidation [11], simple microwave-assisted solvothermal process [26], ion exchange and precipitation methods [27], and hydrothermal method [28]. Several studies on bare transition metal chalcogenides (MoS2, NiS2, WS2, CdS and CoS) for the hydrogen evolution reaction (HER) and oxygen reduction reactions (ORR) are reported [29,30,31,32], however, most of these studies mainly focused on electrochemical water splitting. Co-catalysts, such as, reduced graphene oxides [33], metal oxides [34], dyes, for example, Porphyrin (Zn(II)-5,10,15,20-tetrakis(4-carboxyphenyl)-porphyrin (ZnTCPP)) [19], graphene [35], metals [36], and CdLa2S4 nanocrystals [37] were used to enhance the rate of HER. Inorganic crystals with desired properties can be used as excellent candidates for HER. It was reported that the first-row transition metal chalcogenides (MS2; where M = Fe, Co, Ni) exhibit excellent catalytic properties for HER due to their pyrite or marcasite structure, in which the metal atoms are octahedrally bonded to adjacent S atoms. Stability is an important criterion in the development of catalysts [30,38,39,40,41,42,43,44,45]. In this regard, computational modelling was also employed on these metal chalcogenide materials to evaluate their structural properties for photocatalytic water splitting and hydrogen production [46]. In particular, MoS2 has been utilized with other elements via adsorption or intercalation of a cation, such as Li for electrochemical water splitting [46]. In another modelling work, a comparative study was done between WS2 and MoS2 in electrocatalytic water splitting [12]; In an experimental study, Yuexiang Li et al. reported hydrogen production of 99 μmol h−1 with MoS2 loaded on the composites of reduced graphene oxide and CdS, and this was found to be over 20 times higher than the bare CdS. CoS2 doped with Mn [47] and Al [48] used for electrocatalytic HER [49].
Although all the reported work on TMC-embedded TiO2 mainly focused on the electrochemical water splitting and computer modelling, to the best of our knowledge, no experimental study on TMC-embedded TiO2 for heterogeneous hydrogen production over extended solar irradiation has been reported yet. This study focuses on the synthesis of CoS2 (metal chalcogenide)-embedded TiO2 nanocomposite, and the impact of doping CoS2 with TiO2 in hydrogen evolution under UV irradiation.

(1) Titanium dioxide
Nanocrystalline titanium dioxide material was prepared under hydrothermal condition using sol-gel technique. In a typical synthesis, 32.5 mL of ethanol was acidified with 0.3 mL concentrated HNO3 (Sigma-Aldrich, Oslo, Norway) in a Teflon liner and stirred at a constant speed (300 rpm, Velp/AREC, VELP Scientifica Srl,). 6.60 mL of titanium (iv) isopropoxide was added drop wise into it with continuous stirring, Finally, 3.0 mL of water was added to the above solution. Then, it was transferred into an autoclave (AUTOCLAVE-PTFE-0100, TECINSTRO, Maharashtra, India) and kept at 180 °C for 9 hours. The final material was heated at 500 °C for 3 h.
(2) CoS2 embedded TiO2 nanocomposite
118.24 mg of Co(NO3)2 and 192.72 mg of Na2S2O3 were added in to a 100 mL aqueous solution containing deionized water and ethanol in 2:1 ratio under constant stirring (300 rpm) for 30 min. Finally, required amount of TiO2 was dispersed into above solution and the resulting mixture was hydrothermally treated at 180 °C to prepare 10 wt.% of CoS2 embedded TiO2 material. Similar conditions were followed in the preparation of pristine CoS2 nanoparticles without adding titanium dioxide.

The photocatalytic experiments were carried out for pristine TiO2, CoS2 and CoS2/TiO2. Catalysts were suspended in a solution containing 1.5 mL of H2O and 0.5 mL of methanol as a scavenging agent. The suspension was degassed for 30 minutes with high-purity argon prior to irradiation. The suspensions were continuously stirred throughout the course of the experiment. A 300 W Xenon lamp (Oriel light source, Xenon arc lamp, Newport 1000W, CA, USA) with an appropriate filter was used as the source of UV radiation. The amount of H2 produced was measured by gas chromatography (SRI 8610 C, SRI instruments, Torrance, CA, USA) equipped with a molecular sieve column and a TCD (Thermal Conductivity detector), and the amount of hydrogen produced was quantified by using a calibration curve prepared previously.

The amount of hydrogen evolved in the presence of UV irradiation is tabulated and compared with what is reported in the literature in Table 1. Transition metal chalcogenides, including MoS2, NiS, SnS2, WS2, and CdS, have been extensively explored for photocatalytic water splitting [11,24,36,49], since they are usually inexpensive, stable, and easily prepared on a large scale for practical applications. To improve the efficiency of TMCs on hydrogen evolution elemental doping, heterojunctions, and nano structuring have been explored. In this regard, metal chalcogenides have been doped with other components, such as reduced graphene oxide, graphene, dyes, and TiO2 using different experimental conditions.
For example, Qun Wang et al. worked on MoS2 quantum dots-doped TiO2 for hydrogen evolution reaction in under different experimental condition, and the rate of hydrogen evolution was found to be 0.05 mmol cm−2 h−1 [24]. In another study, Youngjun Yuan et al. used ZnTCPP-MoS2 /TiO2 material for HER (Hydrogen Evolution Reaction), where 0.10 mmol h−1 of hydrogen evolved with 1.00 wt.% of MoS2 on TiO2 material [19]. In line with these studies, the results from our study on metal chalcogenide-TiO2 nanocomposites showed that 10 wt.% CoS2 embedded on TiO2 nanocomposites synthesized by hydrothermal method was the excellent candidate for the photocatalytic HER with better hydrogen evolution rate of 2.55 mmol g−1. Pristine CoS2 alone showed no activity towards hydrogen production even after 4 hours of irradiation, whereas the TiO2 materials exhibited 1.88 mmolg−1 of hydrogen under the same experimental conditions. The reason for this observation can be correlated with the bandgap energies of the materials. The CoS2/TiO2 materials with highest activity exhibit bandgap of 3.4 eV, whereas the pristine TiO2 exhibits bandgap of 3.2 eV. Under UV irradiation, the electron-hole pair formed on the nanocomposites was effectively separated due to the bandgap >3 eV. However, in the case of pristine CoS2 (Bandgap of 2.5 eV), it can be concluded that the faster recombination rate of photogenerated electrons and holes hinder the formation of hydrogen effectively, and, thus, there is no activity observed with this catalyst, but CoS2 nanoparticles act as a co-catalyst in the nanocomposite of CoS2/TiO2 materials to enhance the hydrogen production by exciting more electrons to the surface of titanium dioxide.

This research was funded by Capacity Building and Establishment of a Research Consortium (CBERC) project, grant number LKA-3182-HRNCET and Higher Education and Research collaboration on Nanomaterials for Clean Energy Technologies (HRNCET) project, and grant number NORPART/2016/10237.