Poly(ethylene oxide terephthalate)/poly(butylene terephthalate) (PEOT/PBT) segmented block copolymers are widely used for the manufacturing of 3D-printed bio-scaffolds, due to a combination of several properties, such as cell viability, bio-compatibility, and bio-degradability. Furthermore, they are characterized by a relatively low viscosity at high temperatures, which is desired during the injection stages of the printing process. At the same time, the microphase separated morphology generated by the demixing of hard and soft segments at intermediate temperatures allows for a quick transition from a liquid-like to a solid-like behavior, thus favoring the shaping and the dimensional stability of the scaffold. In this work, for the first time, the rheology of a commercial PEOT/PBT material is studied over a wide range of temperatures encompassing both the melt state and the phase transition regime. Non-isothermal viscoelastic measurements under oscillatory shear flow allow for a quantitative determination of the material processability in the melt state. Additionally, isothermal experiments below the order–disorder temperature are used to determine the temperature dependence of the phase transition kinetics. The importance of the rheological characterization when designing the 3D-printing scaffold process is also discussed. View Full-Text
Keywords: poly(ethylene oxide terephthalate); poly(butylene terephthalate); random block copolymers; microphase separation; rheology; viscoelasticity; 3D-printing; scaffolds poly(ethylene oxide terephthalate); poly(butylene terephthalate); random block copolymers; microphase separation; rheology; viscoelasticity; 3D-printing; scaffolds
►▼ Show Figures 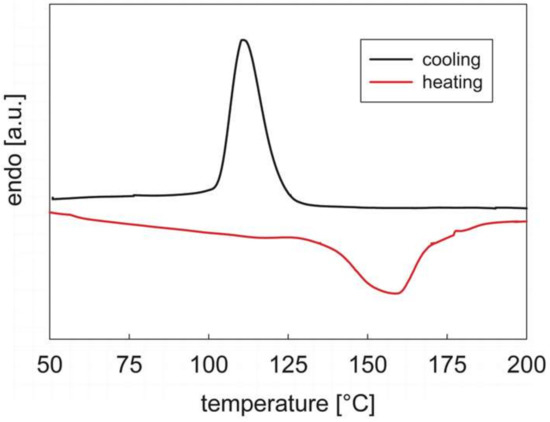