The aim of root canal treatment is to provide three-dimensional obturation of the root canal system to prevent the entry of bacteria and fluid [1,2,3]. To provide hermetic sealing, core materials such as gutta-percha (GP) and root canal sealers are essential [4,5]. Sealers should be biocompatible and nonirritating to the periradicular tissues [6,7]. The most commonly used sealers are calcium hydroxide sealers, glass ionomer sealers, zinc oxide eugenol sealers, resin-based sealers, and the recently introduced calcium silicate-based sealers. AH Plus Plus (Dentsply DeTrey GmbH, Konstanz, Germany) is a conventional epoxy resin-based root canal sealer with low microleakage and good penetration ability into dentinal walls [8,9]. This sealer exhibits toxicity when freshly mixed that gradually reduces upon setting [7,10]. If in direct contact with viable tissues over extended periods, it causes an inflammatory reaction and may result in delayed healing [11]. To overcome this toxicity problem, calcium silicate-based sealers have been developed.
EndoSequence BC Sealer (Brasseler, Savannah, GA, USA) is a bioceramic calcium phosphate silicate-based sealer. It has an alkaline pH, a high rate of calcium ion release, and suitable flow capacity [12]. It also shows superior biocompatibility and osteogenic differentiation ability relative to other endodontic sealers [13,14,15,16,17].
BioRoot RCS (Septodont, Saint Maur-des-Fossés, France) is composed mainly of tricalcium silicate and zirconium oxide powder that must be mixed with a liquid containing calcium chloride. In recent studies comparing epoxy resin-based and calcium silicate-based sealers, BioRoot RCS showed excellent biocompatibility in both fresh and set states [17,18,19].
Endoseal MTA (Maruchi, Wonju, Korea) is a pozzolan-based premixed calcium silicate sealer that offers satisfactory biocompatibility [15,20] and good root canal filling quality [21,22]. It has high alkalinity and low solubility, similarly to ProRoot MTA (Dentsply Tulsa Dental Specialties, Johnson City, TN, USA) [23].
The biocompatibility and osteogenic potential of these three newly developed root canal sealers have not been fully reported. The purpose of this study was to compare the cytotoxic effects and mineralization activity of the above three calcium silicate-based root canal sealers to those of a conventional resin-based sealer.

This study was approved by the institutional review board of the Catholic University of Korea (IRB No. KC19SNSI0186). Passage 3 hDPSCs were used for the experiments in this study. The cell lines were developed anonymously at Top Cell Bio, Inc. (Seoul, Korea). Cells were grown in a growth medium consisting of HyClone Minimum Essential Medium (α-MEM; GE Healthcare Life Sciences, Pittsburgh, PA, USA) supplemented with HyClone 10% fetal bovine serum (GE Healthcare Life Sciences), 100 U/mL of penicillin, and 100 μg/mL of streptomycin. Cell cultures were maintained at 37 °C in a humified atmosphere with 5% CO2. In colony-forming tests, the majority of hDPSCs maintained their spindle-shaped morphology, consistent with other types of mesenchymal stem cells. All experimental procedures were performed under aseptic conditions.

The root canal sealers tested in this study were EndoSequence BC sealer (Brasseler), BioRoot RCS (Septodont), Endoseal MTA (Maruchi), and AH Plus (Dentsply DeTrey GmbH). Their compositions are from the manufacturer’s guidelines and are presented in Table 1. All experimental sealers were mixed in accordance with the manufacturer’s instructions. EndoSequence BC sealer and Endoseal MTA, a premixed sealer, were placed in a disposable syringe. One spoon of BioRoot RCS powder was mixed with five drops of a liquid consisting of water and calcium chloride. AH Plus Sealer was mixed at a 1:1 ratio in accordance with the manufacturer’s instructions. Disks of each root canal sealer 6 mm in diameter and 3 mm in height were made under aseptic conditions using sterile Teflon molds. All disks were stored in a 100% humidity chamber at 37 °C for 72 h to achieve setting.

The cytotoxicity of various root canal sealers was evaluated using a methyl-thiazoldiphenyl-tetrazolium (MTT) assay (MTT Cell Growth Assay Kit, Chemicon, Rosemont, IL, USA). This assay exploits the ability of mitochondrial dehydrogenase enzymes to convert the yellow water-soluble tetrazolium salt 3-(4,5,-mimethyl-thiazol)-2,5,-diphenyl-tetrazolium bromide into colored compounds of formazan. The absorbance depends on the number of living cells. Here, hDPSCs were seeded in 24-well plates (SPL Life Sciences Co., Ltd., Pocheon, Korea) at a density of 1.0 × 104 cells/well and incubated for 24 h in growth medium to allow for cell attachment. Each disk was placed individually into an insert with a 0.4-μm pore size (SPLInsert; SPL Life Sciences Co., Ltd.), and the insert was placed over the attached cells. To maintain the culture medium above the level of the disk, an additional 1 mL of growth medium was supplemented in each well. For controls, hDPSCs cultured without experimental disks were used. For 5 days, hDPSCs with various root canal sealer disks were incubated, and the growth medium was changed every 2 days. The proliferation of hDPSCs was analyzed after 0, 24, 48, 72, and 120 h of culture growth. Experimental procedures are shown in Figure 1. Wells were rinsed with phosphate-buffered saline (PBS) and incubated with the MTT solution (500 μg/mL) for 4 h. Subsequently, each well was rinsed with PBS, and dimethyl sulfoxide was then added to extract and solubilize the formazan. The absorbance at 570 nm was measured with an absorbance microplate reader (Power Wave XS; BioTek Instruments, Winooski, VT, USA) using absorbance at 630 nm as the reference wavelength. Each experimental group was analyzed in quadruplicate.

To evaluate cell migration ability, a scratch wound healing assay was used: hDPSCs were seeded in 24-well plates (SPL Life Sciences Co., Ltd.) at a density of 3.5 × 104 cells/well and incubated for 24 h in growth medium to allow for cell attachment. A scratch was made in the center of the confluent layer of cells using a 1000-μL pipette tip. After wounding, cell debris was washed away with PBS. Each disk was placed individually into an insert with a 0.4-μm pore size (SPLInsert; SPL Life Sciences Co., Ltd.), and the insert was placed over the attached cells. To maintain the culture medium above the level of the disk, an additional 1 mL of growth medium was added to each well. For controls, hDPSCs cultured without experimental disks were used. For 4 days, hDPSCs with various root canal sealer disks were incubated, and the growth medium was changed every 2 days. Images of the scratch area were taken at 0, 24, 48, 72, and 96 h using a phase-contrast microscope (Olympus, Tokyo, Japan). ImageJ 1.46r software (National Institutes of Health, Bethesda, MD, USA) was used to measure the surface covered by the cells. The area of cell migration into the scratch area was calculated using the original scratch area as the reference. Each experimental group was analyzed in quadruplicate.

Here, hDPSC morphology was evaluated with a scanning electron microscope (SEM) after direct exposure of the cells to the experimental disks. Cells were seeded at a density of 5.0 × 104 cells/well onto disks in 24-well plates (SPL Life Sciences Co., Ltd.), while control group cells were seeded on glass coverslips (SPL Life Sciences Co., Ltd.). After direct contact for 72 h, the growth medium was aspirated, and disks were washed using PBS. Cells on the disk were fixed by adding 2 mL of 2% buffered paraformaldehyde for 4 h and were then washed four times with PBS. All experimental disks with cells were rinsed with distilled water and dehydrated. Subsequently, they were mounted on aluminum stubs and sputter-coated with a 30-nm layer of gold. All specimens were observed with an S-4700 field emission SEM (FESEM; Hitachi, Tokyo, Japan). The voltage was set to 15.0 kV, the signal type was secondary electrons, the working distance was 12 mm, and the scan speed was 16 frames per 20 s.

Each experimental root canal sealer disk was transferred to conical tubes containing 20 mL of fresh growth medium and stored in a humidified atmosphere at 37 °C and 5% CO2 for 7 days. Supernatant from this preparation was filtered using 0.20-μm filters (Minisart; Sartorius Stedim Biotech, Goetingen, Germany), and hDPSCs were seeded in 24-well plates (SPL Life Sciences Co., Ltd.) at a density of 2.0 × 104 cells/well and incubated for 24 h in growth medium to allow for cell attachment. Mineralization activity was determined after 15 days of incubation, and root canal sealer extracts were changed every 3 days. Cells were stained with 2% Alizarin red stain solution for 20 min and washed five times with sterile water. The stain was treated with 10% cetylpyridinium chloride for 15 min to quantitatively evaluate the results, and the absorbance at 560 nm was measured with an absorbance microplate reader (Power Wave XS). Each experimental group was analyzed in quadruplicate.

This work was supported by a grant from the Catholic Medical Center Research Foundation in the program year of 2017 and by a National Research Foundation of Korea (NRF) grant funded by the Korean government (Ministry of Science, ICT, and Future Planning) (nos. 2017R1C1B5017098 and 2015R1C1A1A02037643). 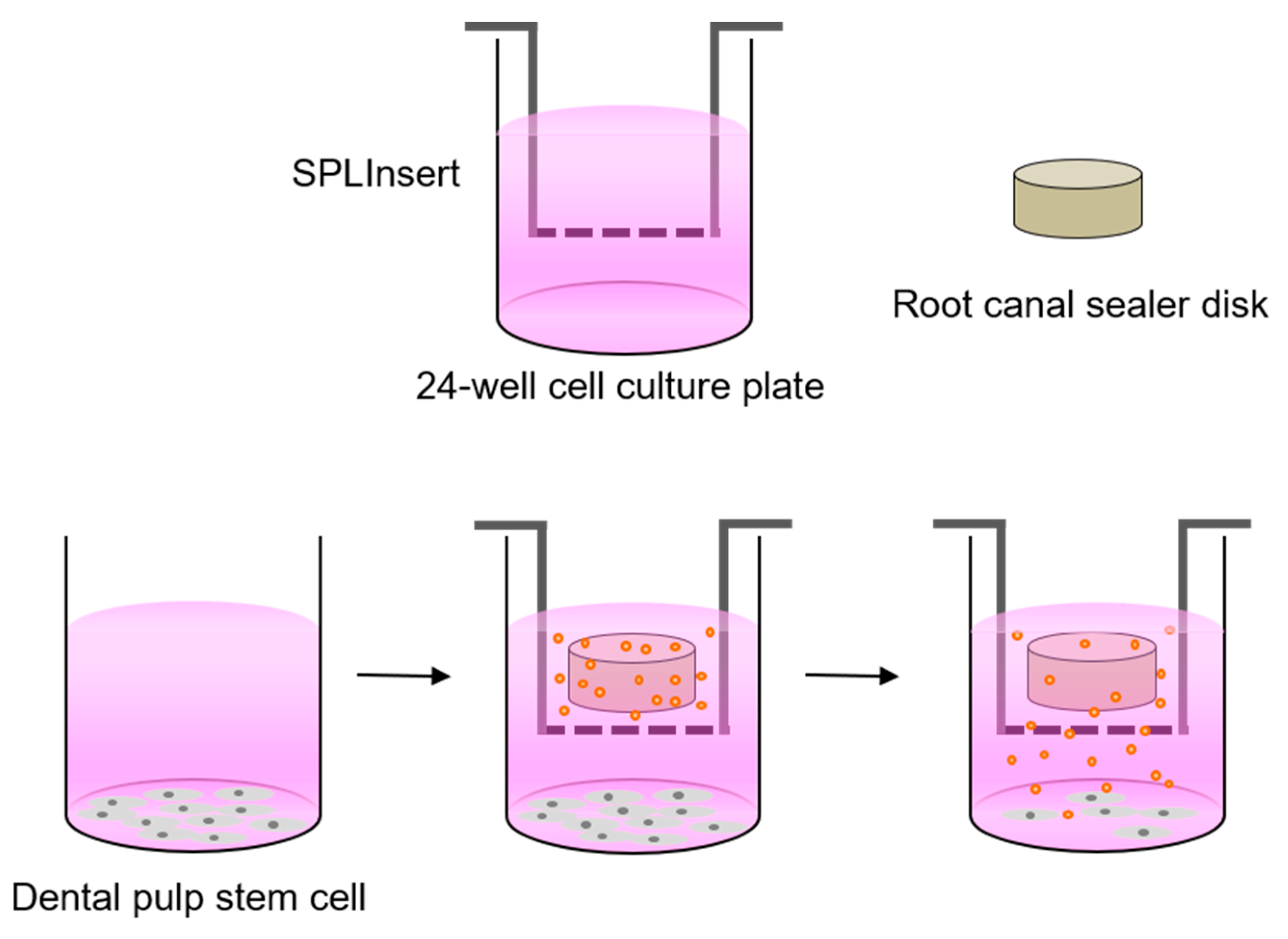 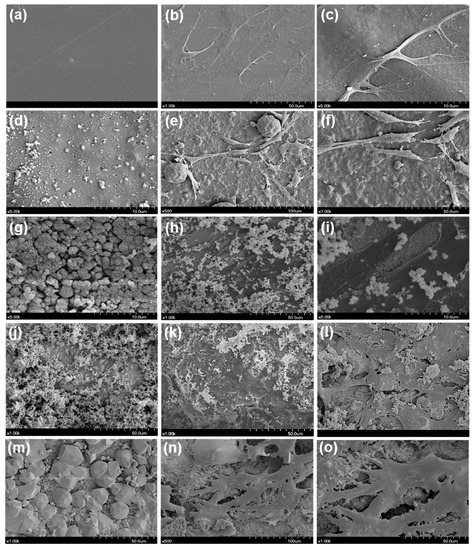 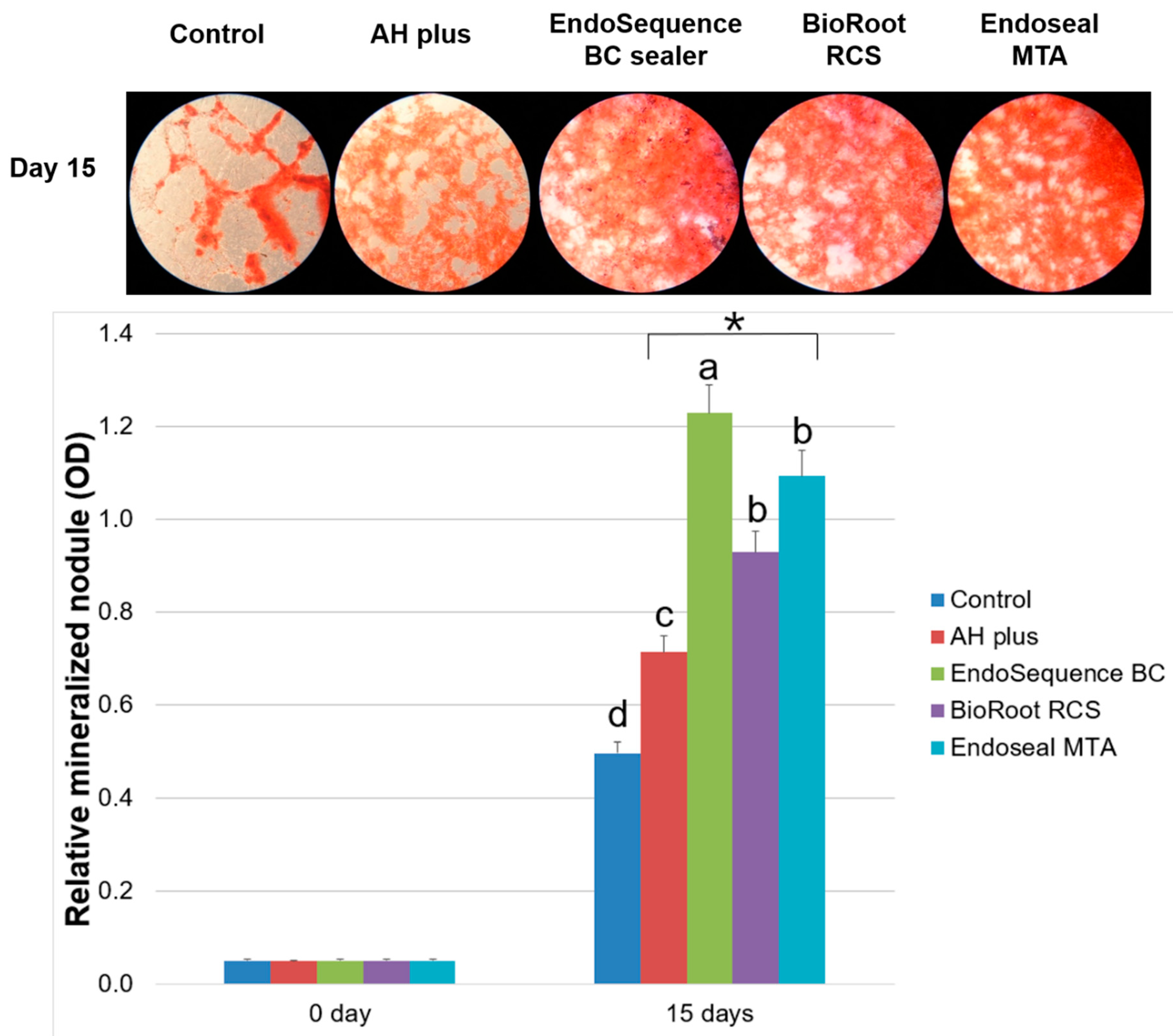 Table 1. Manufacturer and chemical composition of experimental sealers.
Table 1. Manufacturer and chemical composition of experimental sealers.
© 2019 by the authors. Licensee MDPI, Basel, Switzerland. This article is an open access article distributed under the terms and conditions of the Creative Commons Attribution (CC BY) license (http://creativecommons.org/licenses/by/4.0/).
We use cookies on our website to ensure you get the best experience. Read more about our cookies here.
Accept
We have just recently launched a new version of our website. Help us to further improve by taking part in this short 5 minute survey here. here.
Never show this again