Three-dimensional obturation of the root canal system is an important step in root canal treatment [1]. In the traditional canal obturation techniques, gutta-percha has been used as the main canal filling material, and root canal sealer has been used as an auxiliary/complementary material [2,3]. However, the contemporary concept of canal obturation has been changed with advancement of root canal sealer and its simplified application method [3]. Recently introduced calcium silicate or bioceramic-based sealers are suggesting the single cone technique, which may permit more sealers than the conventional techniques, and this technique is changing the paradigm of root canal filling procedure [3,4].
Ideally, the contact between the root canal wall and the filling material is terminated at the physiologic apical foramen area [2]. However, the sealer is open extruded over the apex in practice. When the sealer overfills or extrudes to the periapical area, unreacted material may stimulate the immune system, which causes inflammatory reaction to the apical tissue [5]. This undesirable reaction may happen via the accessory canals or dentinal tubules [2]. Even if there is no extrusion, root canal sealer may release a soluble toxic substance to the periapical tissues and affect the local bone metabolism and wound-healing process [6]. Therefore, one of the most important prerequisites of root canal sealer is the biocompatibility, and it is important to investigate the cytotoxicity or biological irritation of the sealers. Gutta-percha has been known to have low cytotoxicity [7], however, recent studies have shown that root canal sealer containing epoxy resin and amines showed various tissue responses and cytotoxicity in vivo and in vitro [8,9]. Calcium silicate-based sealers are a sort of bioceramic based sealers that are composed of bioceramic powder and vehicle, having some mechanisms to make them biocompatible, such as biomineralization and osseo-conductivity [4].
Human periodontal ligament stem cells (hPDLSCs) are a kind of multipotent stem cell population and recently have been frequently used for in vitro biocompatibility study [10]. Meanwhile, the newly introduced injectable premixed paste type of calcium silicate-based sealers have not been investigated enough in terms of biocompatibility, although these new sealers’ physicochemical properties have been studied [11,12].
The aim of this study was to assess the effect of three calcium silicate-based sealers, EndoSeal MTA, Nano-ceramic Sealer, and Wellroot ST on various aspects, such as cell viability, inflammatory response, and osteogenic potential, of hPDLSCs. The null hypothesis was that the calcium silicate-based sealers and epoxy resin-based sealers had the similar biocompatibility.

2.1. Isolation of hPDLSCs and Cell Culture

hPDLSCs were obtained from premolars (n = 4) of four healthy subjects, whose ages ranged from 16 to 24 years old. Teeth were extracted under the purpose of orthodontic treatment, and the written informed consent forms according to the guidelines of the Ethics Committee of the research institution (Institutional Review Board number: 2-2017-0002) were obtained from the donors. Human PDL tissue was isolated from the middle-third of the root and minced to 2 mm size pieces using a surgical blade. Then, the pieces of hPDL tissue were washed five times using Dulbecco’s modified Eagle’s medium (DMEM; Gibco, NY, USA) containing 3% penicillin-streptomycin (Gibco) and placed on a 6-well culture plate (SPL, Pocheon, Korea). The explants were grown in DMEM with 15% fetal bovine serum (FBS; Gibco) and 1% penicillin-streptomycin. Migrated hPDLSCs from the explants were carried out to passage 2 cells by cell dissociation using trypsin (Gibco). The isolated hPDLSCs were cultured and incubated at 37 °C in 5% CO2. For all experiments, hPDLSCs at passages 4 to 6 were used.

Two epoxy resin-based sealers (AH-Plus; DentsplySirona, Tulsa, OK, USA; AD Seal; MetaBiomed, Cheongju, Korea) and three calcium silicate-based sealers (EndoSeal MTA; Maruchi, Wonju, Korea; Nano-ceramic Sealer; B&L Biotech, Fairfax, VA, USA; and Wellroot ST; Vericom, Chuncheon, Korea) were used for the experimental materials (Table 1).
All experimental sealers prepared according to the manufacturers’ instructions were mixed with culture medium (DMEM) at a concentration of 20 mg/mL to make material extraction medium, incubated for 24 h in 5% CO2 at 37 °C. The supernatant of material extraction medium was filtered using a 0.2 μm pore-size syringe filter (Corning; Merck, Darmstadt, Germany). A dilution (1/4 vol/vol) of these material extraction media was prepared with culture medium.
All sealers were mixed and manipulated depending on the manufacturer’s instructions and incubated for 48 h to allow them to be set completely in an incubator (37 °C, >95% relative humidity). Set specimens of the tested sealers were made with discs (5-mm diameter and 2-mm thick, 200 mg weight) fabricated from cylindrical Teflon molds in sterile conditions. To prepare an extraction vehicle, each set sample disc was stored and incubated in DMEM solution with 10% FBS and 1% penicillin-streptomycin for 72 h in 5% CO2 at 37 °C. Every 24 h the medium was changed, and then the 48-h and 72-h extraction media were collected and passed through a 0.2 µm filter (Minisart, Goettingen, Germany) (Figure 1).

The 3-(4,5-dimethylthiazolyl-2-yl)-2,5-diphenyltetrazolium bromide (MTT) assay was performed to investigate the influence on the cell viability, proliferation, and the toxicity of all materials on hPDLSCs. The cells (2 × 104) were seeded in a 24-well plate and exposed to the extraction media (both of the fresh and set materials) for 7 days. After each experiment period, MTT solution (final concentration, 0.5 mg/mL) was added to each well and incubated for 2 h. Subsequently, the medium containing MTT solution was removed, and 300 μL dimethyl sulfoxide (DMSO; Merck) was added to each well to dissolve the MTT formazan. The dissolved formazan solution of each well was transferred to a 96-well plate and measured at 540 nm in microplate reader (BioTek, Winooski, VT, USA).

All sealers were made with discs (5-mm diameter and 2-mm thick) fabricated from cylindrical Teflon molds in sterile conditions. After transferring the disc into the 96-well plate (Merck), hPDLSCs (5 × 104 cells/mL) were directly seeded onto each set disc and incubated in 5% CO2 at 37 °C for 72 h. The discs were taken out from 96-well plate, rinsed with PBS and fixed with 2% glutaraldehyde. To examine the cell morphology on the discs using scanning electronic microscopy (SEM; Hitachi S-3000N; Hitachi, Tokyo, Japan), all discs were subjected to dehydration, air-drying, and 100-nm-thick gold/palladium coating. The magnifications used were 200× and 1000×.

To evaluate the inflammatory response of all materials, enzyme-linked immunosorbent assay (ELISA) was conducted. hPDLSCs (1 × 105 cells) were seeded in a 6-well plate, and then after 24 h the medium was changed to 1/4 diluted fresh extraction medium and incubated for 24 h. The concentrations of IL-1β, IL-6, IL-8, IL-10, and TNF-α in the fresh extraction medium were analyzed using ELISA kit (R&D systems) according to the manufacturer’s recommendations and measured at 450 nm in a microplate reader (BioTek).

To confirm the mesenchymal phenotypic characterization of hPDLSCs, flow cytometry (FACS verse; BD bioscience) assay was carried out. The expression of mesenchymal stem cell surface molecules (CD makers as follows; CD73, CD90, CD105, CD11b, CD19, CD34, CD45, and HLA-DR) was analyzed. hPDLSCs (1 × 105 cells) were seeded in a 6-well plate, and 24 h later, medium was changed to 1/4 diluted fresh extraction medium and incubated in 5% CO2 at 37 °C for 72 h. Then, the cells were harvested using 0.05% Trypsin-EDTA, washed with PBS, and made a single-cell suspension for CD markers antigen-antibody reaction and FACS analysis. The reaction of the CD makers in hPDLSCs was evaluated using BD Stemflow human MSC analysis kit (BD Biosciences, Piscataway, NJ, USA) and performed according to the manufacturer’s instructions. All data were analyzed using FlowJo software (BD Biosciences).

Alkaline phosphatase (ALP) staining was conducted to measure the osteogenic activity. hPDLSCs (2.5 × 104 cells) were placed in a 24-well plate and incubated for 3, 6, and 9 days in the fresh extraction medium containing osteogenic-inducing reagents (100 µM l-ascorbic acid 2-phosphate, 10 mM b-glycerol phosphate, and 100 nM dexamethasone). After each time period, cells were fixed with 4% PFA for 10 min, washed twice in PBS, and stained using the ALP Staining Kit (Merck) according to the manufacturer’s recommendations.

Data were analyzed with SPSS software (version 11.0; SPSS, Chicago, IL, USA) for the comparison between materials and the test periods. After checking the data normality, statistical significance was evaluated by Friedman test and Dunn post-hoc for the comparison of materials. The differences between test periods were evaluated by Kruskal–Wallis H and post-hoc Bonferroni–Dunn test (p < 0.05).

Surface analysis on the morphology and adhesion of hPDLSCs on the fully set material disc was performed by scanning electron microscope (SEM). After incubation, hPDLSCs being attached on three calcium silicate set discs (EndoSeal MTA, Nano-ceramic Sealer, and Wellroot ST) were observed, whereas set surface of AH-Plus and AD Seal discs did not show any cell attached due to the cell death (Figure 4). Wellroot ST showed the highest level of cell adhesion and the morphology of attached cells with well-spread and flattened structure.

The mRNA expression of RUNX2 did not show any significant difference among the materials (EndoSeal MTA, Nano-ceramic Sealer, and Wellroot ST) and time periods (3, 6, and 9 days) (Figure 7A). However, ALP mRNA expression showed a significant increase in time-dependent manner on all of three calcium silicate-based sealers (p < 0.05) (Figure 7B). In addition, ALP staining showed increasing time-dependent deep-purple coloration in the three calcium silicate-based sealers (Figure 8).

Based on the results from this study, calcium silicate-based sealers (EndoSeal MTA, Nano-ceramic Sealer, Wellroot ST) appear to be more biocompatible and less cytotoxic than epoxy resin-based sealers.

This study was supported by Basic Science Research Program through the National Research Foundation of Korea (NRF) funded by the Ministry of Education (grant no.: 2018R1D1A1A09081906). 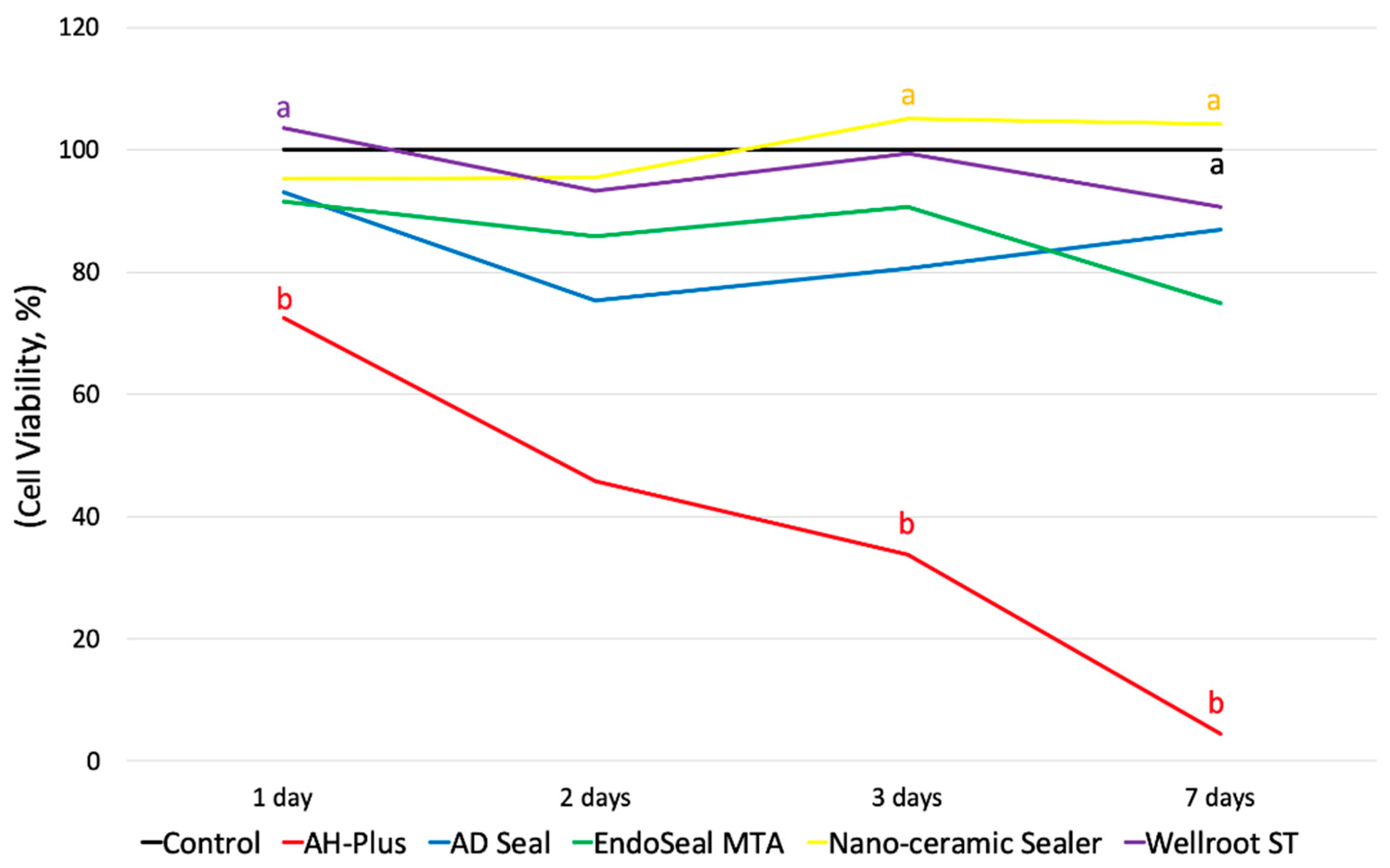 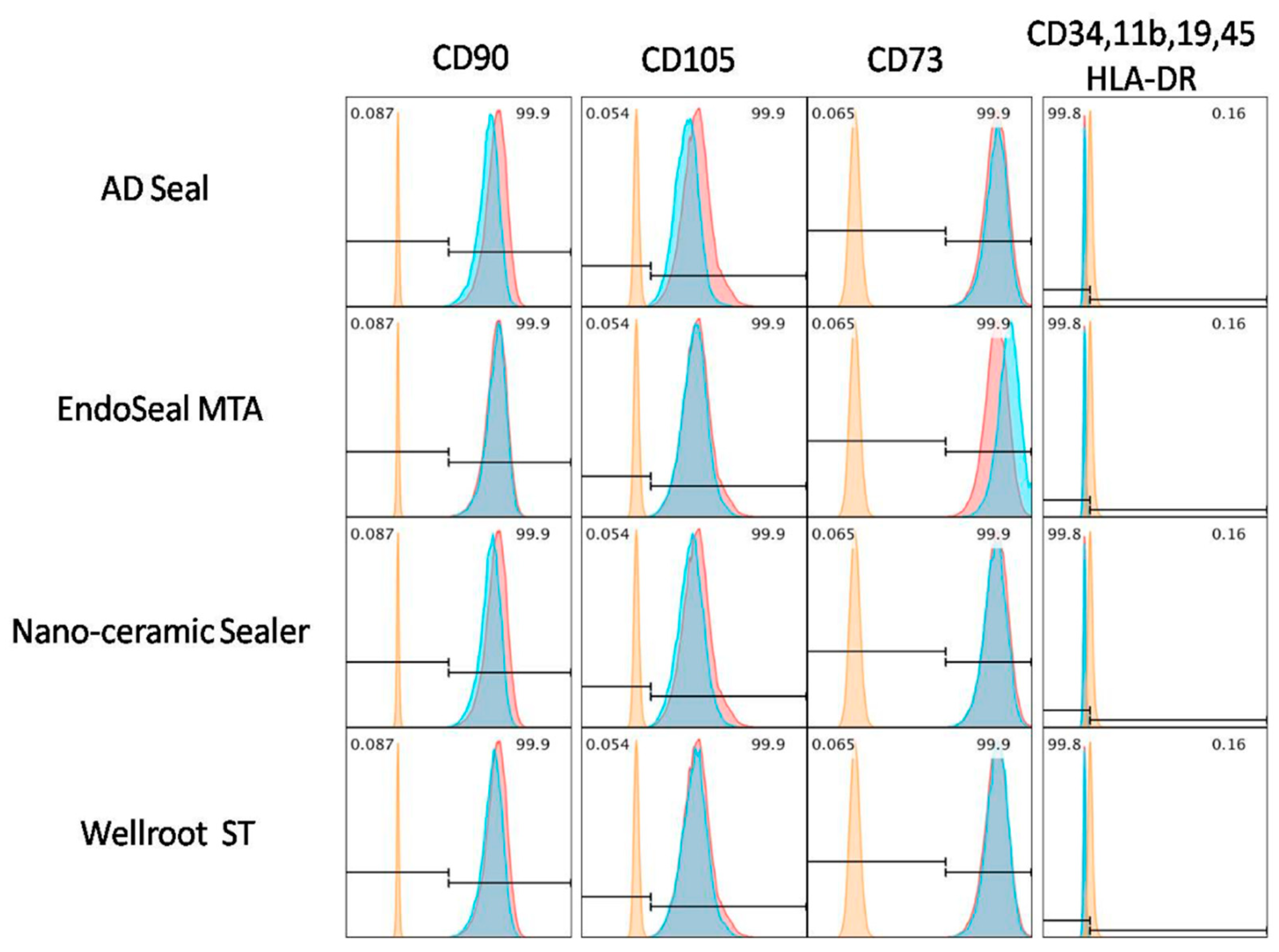 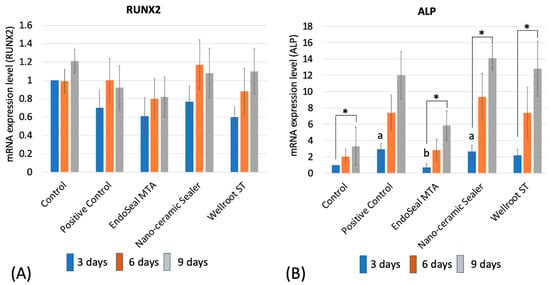 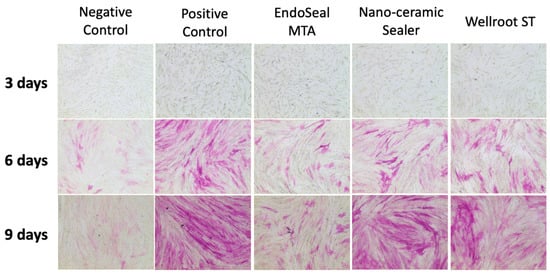 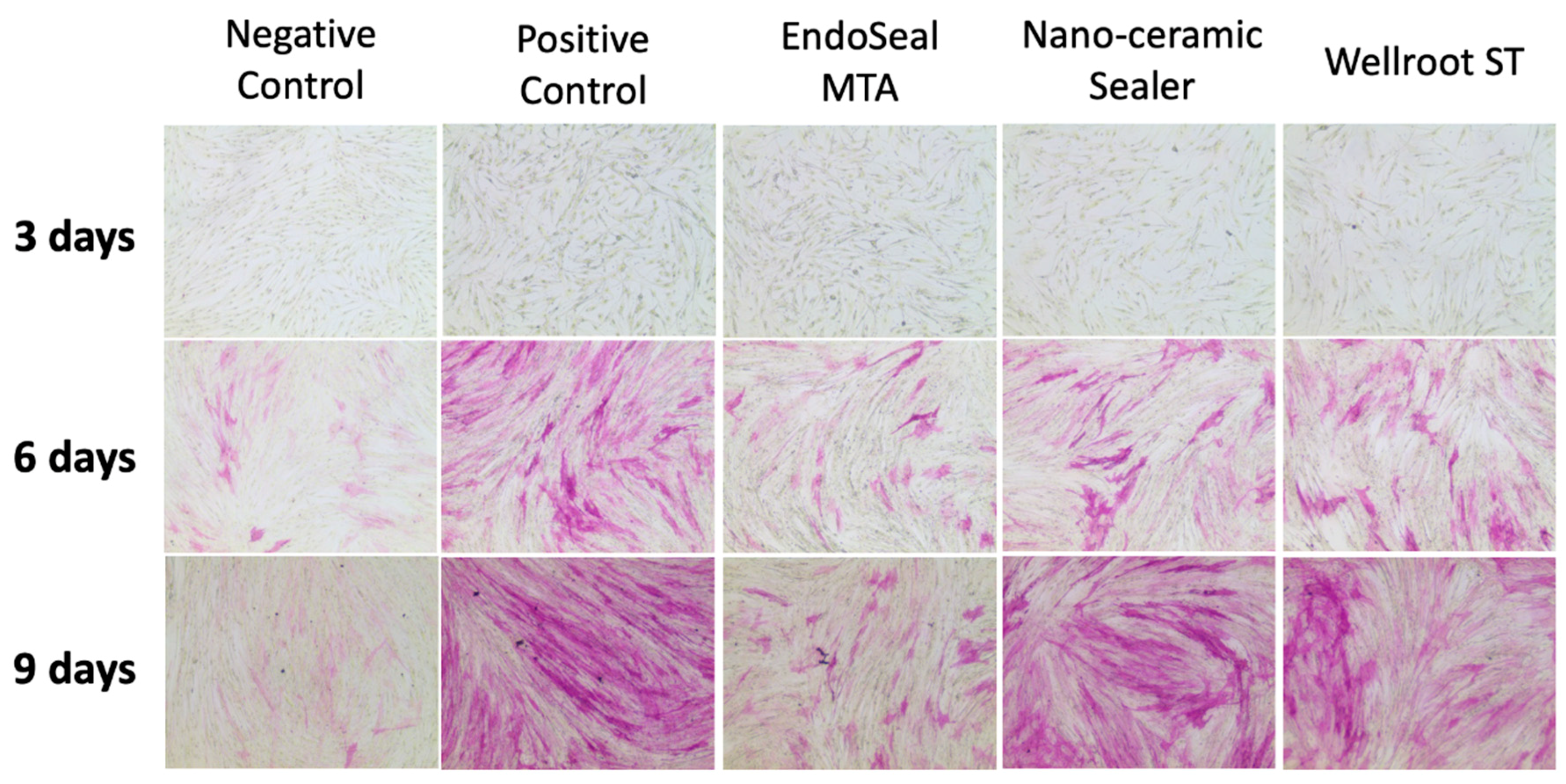