Bacterial cellulose (BC) has recently been the subject of a considerable amount of research, not only for its environmentally friendly biosynthesis, but also for its high potential in areas such as biomedicine or biomaterials. A symbiotic relationship between a photosynthetic microalga, Chlamydomonas debaryana, and a cellulose producer bacterium, Komagataeibacter saccharivorans, was established in order to obtain a viable and active biofilm. The effect of the growth media composition ratio on the produced living material was investigated, as well as the microalgae biomass quantity, temperature, and incubation time. The optimal temperature for higher symbiotic biofilm production was 30 °C with an incubation period of 14 days. The high microalgae presence, 0.75% w/v, and 60:40 HS:BG-11 medium (v/v) induced a biofilm microalgae incorporation rate of 85%. The obtained results report, for the first time, a successful symbiotic interaction developed in situ between an alkaline photosynthetic microalga and an acetic acid bacterium. These results are promising and open a new window to BC living biofilm applications in medical fields that have not yet been explored. View Full-Text
Keywords: bacterial cellulose; microalgae; living biofilm; Chlamydomonas debaryana; Komagataeibacter saccharivorans; symbioses bacterial cellulose; microalgae; living biofilm; Chlamydomonas debaryana; Komagataeibacter saccharivorans; symbioses
►▼ Show Figures 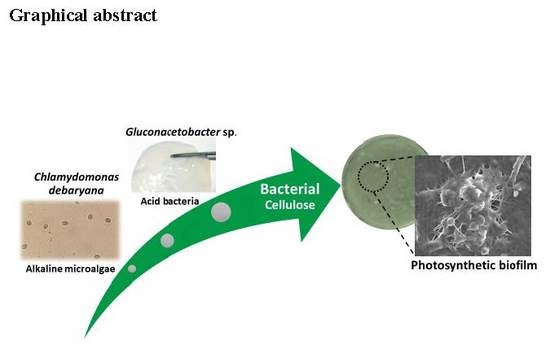