Natural antioxidants extracted from plants and fruits have attracted much attention from scientists and cosmetics manufacturers. Many of these antioxidants have been used in making skincare formulations and have contributed to skin rejuvenation [1]. Cucumber extracts, which are rich in vitamins, such as vitamin A and C, and antioxidants, have been proven to have various effects on the skin, such as soothing of irritated skin, moisturization, anti-inflammatory, sebum secretion inhibitory, and melanin synthesis inhibitory effects [2,3,4]. As a superfood for the skin, cucumber extract has been added to various skin care products, such as toner, lotion, and cream. However, it also contains a significant amount of sugars, such as glucose and fructose [5,6], which do not provide any benefit to the skin. These sugars are a potential source of fermentation to produce lactic acid, which is a potent compound in skin disease treatment [7]. Lactic acid fermentation of cucumber extract is usually hindered by its low pH, caused by the production of lactic acid [6]. A neutralizing agent is typically required to adjust the pH of cucumber extract to favor the conversion of sugars to lactic acid. The common neutralizing agents used in lactic acid fermentation, such as NaOH, Na2CO3, KOH, NH4OH, Ca(OH)2, and CaCO3, enrich the final fermented cucumber extract in Na+, K+, NH4+, and Ca2+, which do not provide any extra value in terms of skincare.
Magnesium is a metal element defined by the symbol Mg and belongs to Group 2 (alkaline earth metals) of the periodic table. Mg is a mineral crucial for human health. It plays a vital role in controlling blood pressure, ensuring normal nerve and muscle functions, and supporting psychological functions and energy production [8,9]. Chronic Mg deficiency could result in many disorders, such as cardiovascular diseases, asthma, diabetes, and osteoporosis [9,10,11]. Suboptimal Mg intake has been recorded in broad sections of the population in many industrialized countries owing to changes in food preparation and nutritive behavior [12]. Oral supplementation or dietary intake are the general ways to overcome Mg deficiency and to ameliorate inflammatory disorders. However, topical Mg application through therapies that have been used for several centuries has been proven to be effective in treating skin diseases [13]. A previous study indicated that hair follicles significantly contributed to the permeation of topically applied Mg through the human skin [14]. In addition, the efficacy of Mg supplementation generally depends on the bioavailability of Mg forms. Organic acid-binding forms of Mg, such as Mg lactate, Mg citrate, and Mg gluconate, are more bioavailable than inorganic Mg salts [8,9,15,16].
This study aimed to develop a potent ingredient for skincare purposes based on the combination of cucumber extract and Mg in a unique product through lactic acid fermentation. This scheme took advantages of fermenting the cucumber extract rich in citric acid to convert available sugars to lactic acid. Hydrated magnesium carbonate, the familiar form of Mg that can be produced at high purity [17], was used as the neutralizing agent in fermentation. Through this process, the Mg ion was dissociated from hydrated magnesium carbonate to bind to organic acids in the fermented cucumber extract. Sugars were depleted and replaced by lactic acid in the fermented solution. The organic Mg salts in the fermented cucumber extract are considered to have higher bioavailability and can be replaced by the inorganic MgCl2, which is commonly present in dermal Mg products.

Cucumber (Cucumis sativus) extract is the fluid surrounding the active cucumber seed. The cucumber was organically bred in Cobbitty, New South Wale, Australia. Cucumber extract was introduced to pasteurization right after harvesting by heating to kill the indigenous bacteria and contaminating bacteria during the harvesting process. Then, it was stored in a sterile container and kept in a freezer at −20 °C for the following experiments.
The pasteurization of cucumber extract was tested at a temperature range of 63 to 121 °C for 1 to 20 min to identify the lowest temperature and shortest time in which all bacteria are killed, and the physicochemical properties of cucumber extract were maintained optimally. The efficacy of pasteurization was determined through bacterial enumeration on an agar plate. Both heat-treated and non-treated samples were serially diluted using phosphate buffer solution, pH 7.2 (34 g/L of KH2PO4), and an aliquot of 0.2 mL was spread on yeast extract–eptone–glucose (YEPG) agar plate [18,19]. The agar plates were then incubated in an incubator at 25 °C. A colony-forming unit (CFU) was calculated after 3 days of incubation. The chemical ingredients with high purity (>99%) were bought from Sigma Aldrich (Merck KGaA, Darmstadt, Germany).

Highly pure hydromagnesite or hydrated magnesium carbonate (HMC) is the product of magnesium recovered from bittern or brine [17]. HMC (>99%) was obtained from EcoMag Ltd. (Chatswood, NSW, Australia). Fine powder of HMC was re-slurried with water at a ratio of 1:3 (weight/weight) before being used for neutralization of cucumber extract.

The pH of the cucumber extract samples was measured using a compact pH meter (LAQUAtwin-pH-22, Horiba Scientific, Kyoto, Japan). The organic acid and sugar contents of the cucumber extract were determined by high-performance liquid chromatography (HPLC) using a Dionex Ultimate3000 high-performance liquid chromatography (ThermoFisher Scientific Inc., Waltham, MA, USA). The conditions of the HPLC are summarized in Table 1. Before subjected to HPLC, all samples were centrifuged at 10,000 rpm for 5 min to remove biomass and then filtrated through a 0.2-µm syringe filter and serially diluted at the appropriate concentration for determination.
Inorganic elements, such as Mg, Na, Ca, K, Fe, V, Ni, Al, B, As, Pb, S, were analyzed using an inductively coupled plasma–atomic emission spectroscopy (ICP-AES; Activa, JY Horiba, France) at the Busan Center of the Korea Basic Science Institute (KBSI). The samples were serially diluted at an appropriate concentration before analysis.

The authors would like to acknowledge Seongyong Yun, Donghee Lee, and Sunja Cho for their assistance during the experiment. 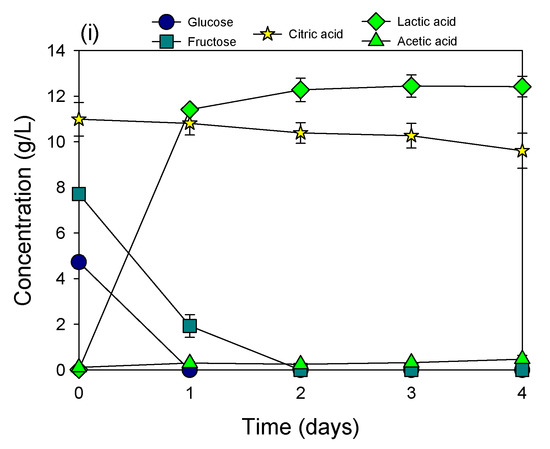