In the past few years, organic-inorganic hybrid perovskite materials CH3NH3PbX3 (X = Cl, Br, I) have been received great attention owing to their high optical absorption coefficient, micron-sized carrier diffusion length, double charge transfer, and long carrier lifetime [1,2,3]. Perovskite materials have been introduced into solar cells as light absorption layers, and the power conversion efficiency of solar cells increased from 3.8% to 23.3% [4]. In the perovskite solar cells, the morphology and structure of the optical absorption layer played an important role in the device performance. The structure and morphology of the optical absorption layer are mainly related to the preparation method, process parameters and so on. The preparation method of the perovskite thin films can be divided into three kinds, solution method, gas-phase method, and gas-assisted liquid-phase method. Among these methods, the solution method is the commonly used because of its simplicity and operability. With the maturity of the preparation methods, some new perovskite thin films preparation methods were appeared, including water molecular engineering [5,6], solvent and anti-solvent engineering [7,8,9] additives, and ammonia gas induced and ambient annealing methods [10,11] have been developed to improve the films quality [12,13]. The solvent engineering [14,15] has been proved to be the easiest and effective way to prepare high quality film among these methods.
Currently, most of the light absorption layer of the perovskite solar cell is polycrystalline perovskite thin film with three-dimensional (3D) structure. However, the introduction of many defects and grain boundaries in 3D bulk perovskite is unavoidable, which could degrade the optoelectronic properties [16]. Based on the random walk model in nanocrystalline system with grain boundaries [17], carrier transport in 3D perovskite structure may not be rapid enough although carrier diffusion length reaches over 1 μm. So, the low-dimensional perovskite materials have been developed, such as two-dimensional (2D) and one-dimensional (1D). Ultrathin 2D perovskite flakes [18] and 2D perovskite nanosheets [16] have been produced due to the high quantum efficiency and excellent photoelectric properties. The photogenerated carriers transport and separation at the interface of hole transport layer and perovskite layer in the 1D perovskite materials were faster than that in the 3D materials [19]. The 1D perovskite nanowires structure presents faster carrier extraction ability [20]. However, the single-crystalline perovskite nanowires with well-defined structures have higher photoluminescence quantum yields, larger carrier mobilities, and longer carrier diffusion lengths [21,22,23]. 1D perovskite nanowires can be used in field emission transistor [21,24] and solar cell [25]. In the recent literature report, the order of perovskite 1D nanowires is not high. If the highly ordered and dispersed nanowires perovskite thin films can be obtained with solvent engineering, it is beneficial to the carrier transport. If the carriers transport can be accelerated, it is very important for solar cells and light emitting diode (LED) applications.
During the solvent engineering, the nucleation and crystallization rate of the perovskite film can be adjusted by adding different proportions of solvent into the precursor solutions. For example, the 1,8-diiodooctane (DIO) additive was added into the perovskite precursor solution to adjust the morphology of the perovskite film [26]. A small amount of CHP (N-cyclohexylpyrrolidone) was added into the precursor solution to form a homogeneous nucleation site in order to control the morphology of the surface of the perovskite film [27]. It has been reported that the perovskite nanowires were prepared by the dropwise addition of toluene while using a mixed solvent of isopropanol and DMF or a mixed solution of DMF and acetonitrile [28,29]. The nanowires prepared by the rapid crystallization method using a single solvent DMF have a size of several micrometers, and it is difficult to regulate the directionality and crystallinity of the nanowires. The crystallization process is slowed by the addition of solvent DMSO, which forms nanowires forest of hundreds of nano-meters by self-assembly during the crystallization process. The 1D nanowire structure thin film has a faster separation rate and better transportability at the interface than the multi-dimensional structure [19,30].
In combination with the above problems, we report a simple solution method for fabricating 1D organic-inorganic hybrid perovskite CH3NH3PbI3 nanowires with DMF and DMSO mixed solvents under atmospheric environment. The nanowires perovskite thin film structure, morphology and optical performance are sensitive to the ratio of DMSO solvent added. Interaction between DMSO and PbI2 was slowed down; the crystallization rate of PbI2 was slowing down, and the intermediate phase CH3NH3I-PbI2-DMSO was introduced into the precursor solution. With the DMSO solvent, it promoted uniform nucleation, improved the morphology and crystallinity, and produced the film of nanowires structure with high crystallinity and order orientation. The high order orientation nanowires perovskite thin film presents the preferable optical absorption and electrical properties. The effect of DMSO added ratio on the precursor solution fluorescence performance, the perovskite structure, morphology, and optical and electrical properties have been investigated. The best ratio of DMSO solvent added also has been optimized.

The reactants included CH3NH3I and PbI2. The solvent included N,N-dimethylformamide (DMF) and dimethyl sulfoxide (DMSO). The information about these reactants and DMF solvent can be found in literature [31]. The DMSO solvent was purchased from Chengdu Kelon Chemical Reagent Factory (Chengdu, China). All of the reactants and solvents were not purified again. In this experiment, 2.0 × 2.0 cm SnO2:F (FTO) glass was used as the substrate. The FTO substrate cleaning method can be referred to the literature [32]. Finally, the FTO substrate was placed in the container with the beaker of ethanol.

The molar ratio of CH3NH3I and PbI2 is 1:1. Then, these reactant powders were added into the DMSO and DMF mixed solvents, and the total volume of solvent was 2 mL. A homogeneous perovskite precursor solution can be obtained by ultrasonic oscillation with 10 h at 70 °C. In this work, the other parameters are kept unchanged, just changing the ratio of DMSO and DMF in solvents. The volume ratios of solvent DMSO set as 0%, 5%, 10%, 15%, and 20%, respectively. The DMSO different ratios were labeled with numbers a, b, c, d, and e.
The perovskite thin films were prepared with two step spin-coating method. Firstly, perovskite precursor solution was spin-coated into the FTO substrate at 2000 rpm for 30 s in the room temperature atmospheric environment. Then put it into the drier at 70 °C for 30 s formed a seed layer. Secondly, take appropriate amount perovskite precursor solution was drop-coated on the seed layer evenly. Subsequently, the samples were annealed in a drying oven at 100 °C for 30 min to obtain the CH3NH3PbI3 films. Figure 1 shows the schematic diagram of perovskite thin films preparation progress. Finally, the electrode was produced by scraping a layer of conductive silver glue on the perovskite thin film. The structure of the perovskite solar cell was presented in Figure 2.

Firstly, the TG-DSC curves of the perovskite precursor solution were shown in Figure 3. The temperature range was 25 °C–600 °C. To investigate the effect of DMSO solvent added on the perovskite thin film growth, we compared the differences of the TG-DSC curves before and after the DMSO solvent added. Figure 3a shows the TG-DSC curves before the DMSO solvent added, and Figure 3b shows the TG-DSC curves with a ratio of 10% DMSO solvent added. In Figure 3a, there are three significant weightlessness behaviors in the TG curve. Between 50 °C and 150 °C ranges, the TG curve shows falling rapidly, and the decrease extent is close to 80%. Due to the solvent, the DMF boiling point is 152.8 °C, so the TG curve (in Figure 3a) decreases rapidly with the DMF solvent volatilization. During this temperature range, there are two endothermic peaks in the DSC curve (see in Figure 3a). After the DMSO solvent was added, the TG curve also shows significantly decrease. The TG curve stops falling at about 200 °C, and the decrease extent is close to 85%. However, the TG decrease extent is greater than that of the former TG curve. The main reason for this difference is the addition of DMSO solvent in the precursor solution. For the DMSO and DMF mixed solvents, the solvents volatilization temperature was increased to the high temperature zone about 200 °C when compared with the single DMF solvent. Here, the boiling point of DMSO solvent is 189 °C, which is higher than the DMF solvent. The mixed solvents evaporation temperature increased, and the weight loss extent also increased. There are also two endothermic peaks in the DSC curve (see in Figure 3b). The endothermic peaks centers are moved to the higher temperature region when compared with the DSC curve with single DMF solvent.
When the temperature increases, there is no obvious change in the two TG curves in a very short range of temperature. When the temperature increased from 320 °C to 350 °C, there is a slight decrease in the TG curve (see in Figure 3a). In Figure 3b, the TG curve just shows a very weak decrease, and it is almost invisible. This process is corresponding to the decomposition of CH3NH3PbI3. The organic amine salt was decomposed into organic amine and HI gas, which were volatilized. When the temperature increased from 460 °C to 560 °C, there is an obvious decrease in the two TG curves. Corresponding to the DSC curves, there is an endothermic behavior. This process corresponds to the volatilization of I in PbI2. Compared with the TG-DSC patterns of the solutions before and after the DMSO solvent added, it could be clearly seen that the evaporation rate of the solvent was slowed down, which contributed to the crystal nucleation and growth.

3.5. The Transient Photocurrent and J-V Analysis

This work was supported by the Henan International Science and Technology Cooperation Project of China (No.152102410035); the China Postdoctoral Science Foundation (No.2018M632771); and the University Key Research Project of the Henan Province (No.15A430023). 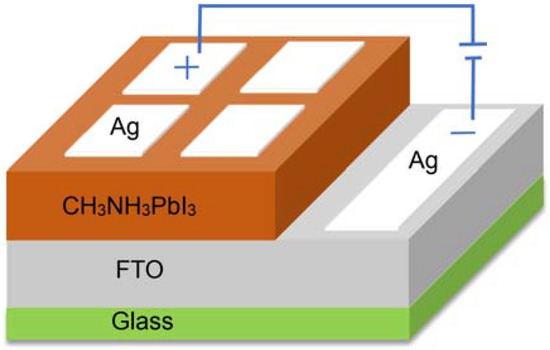 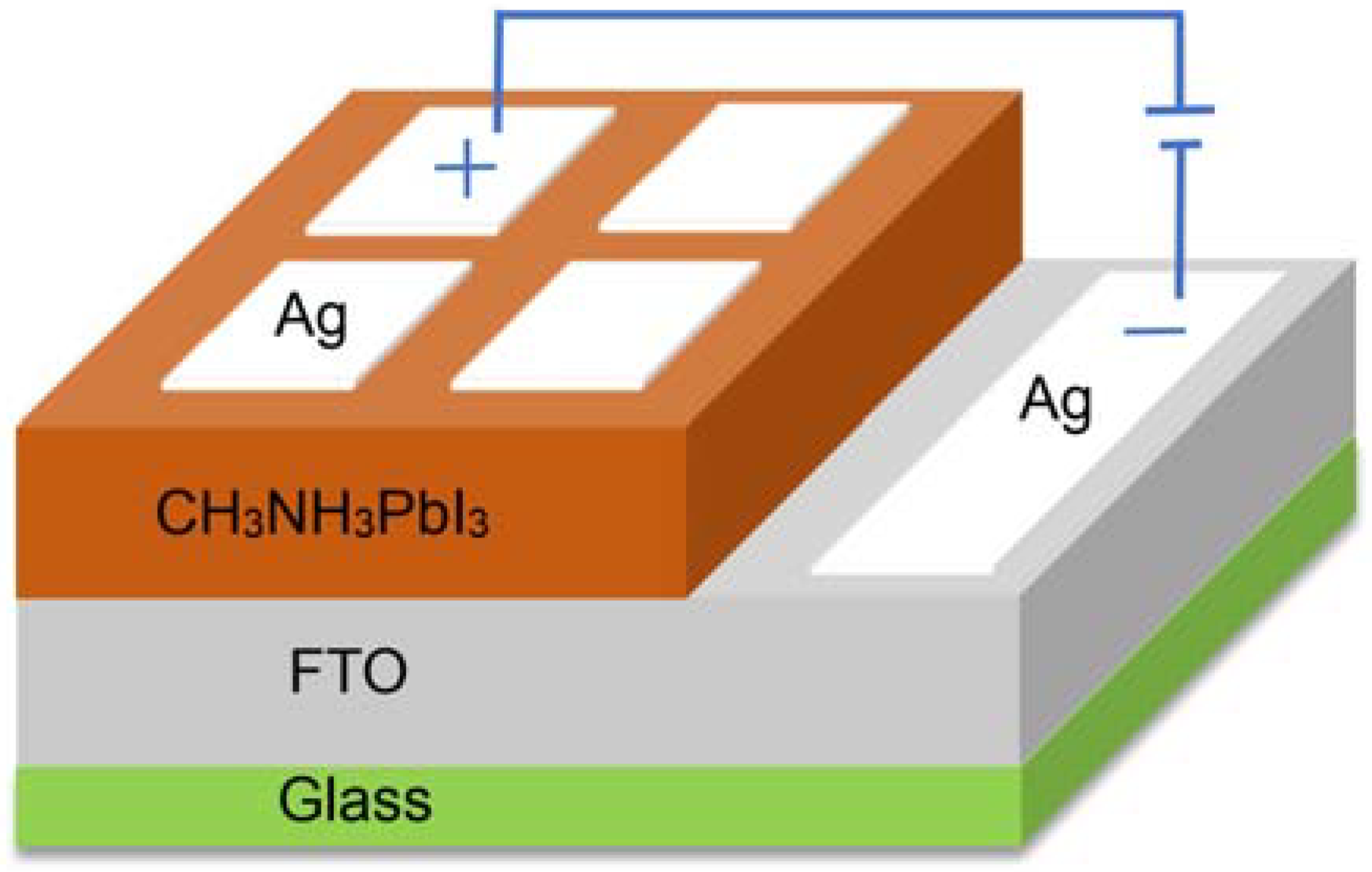 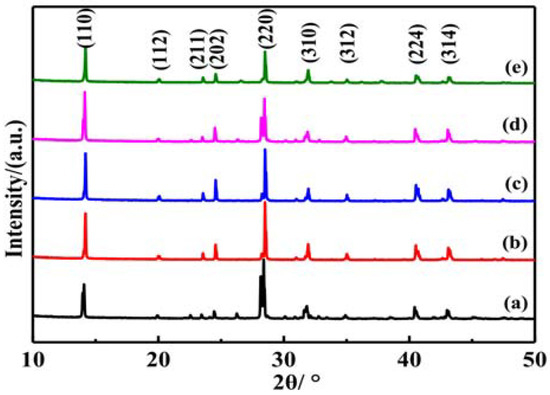 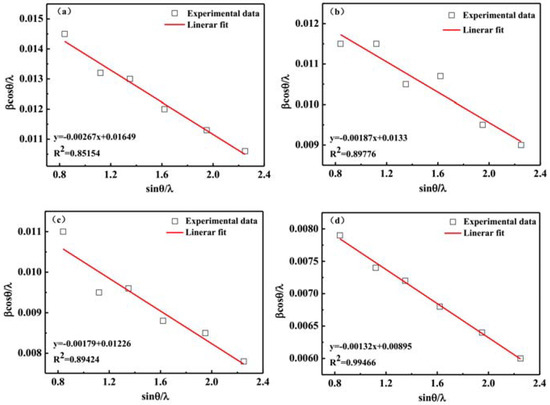 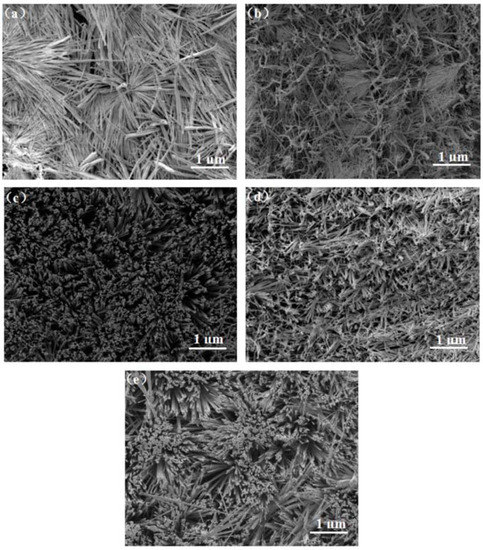 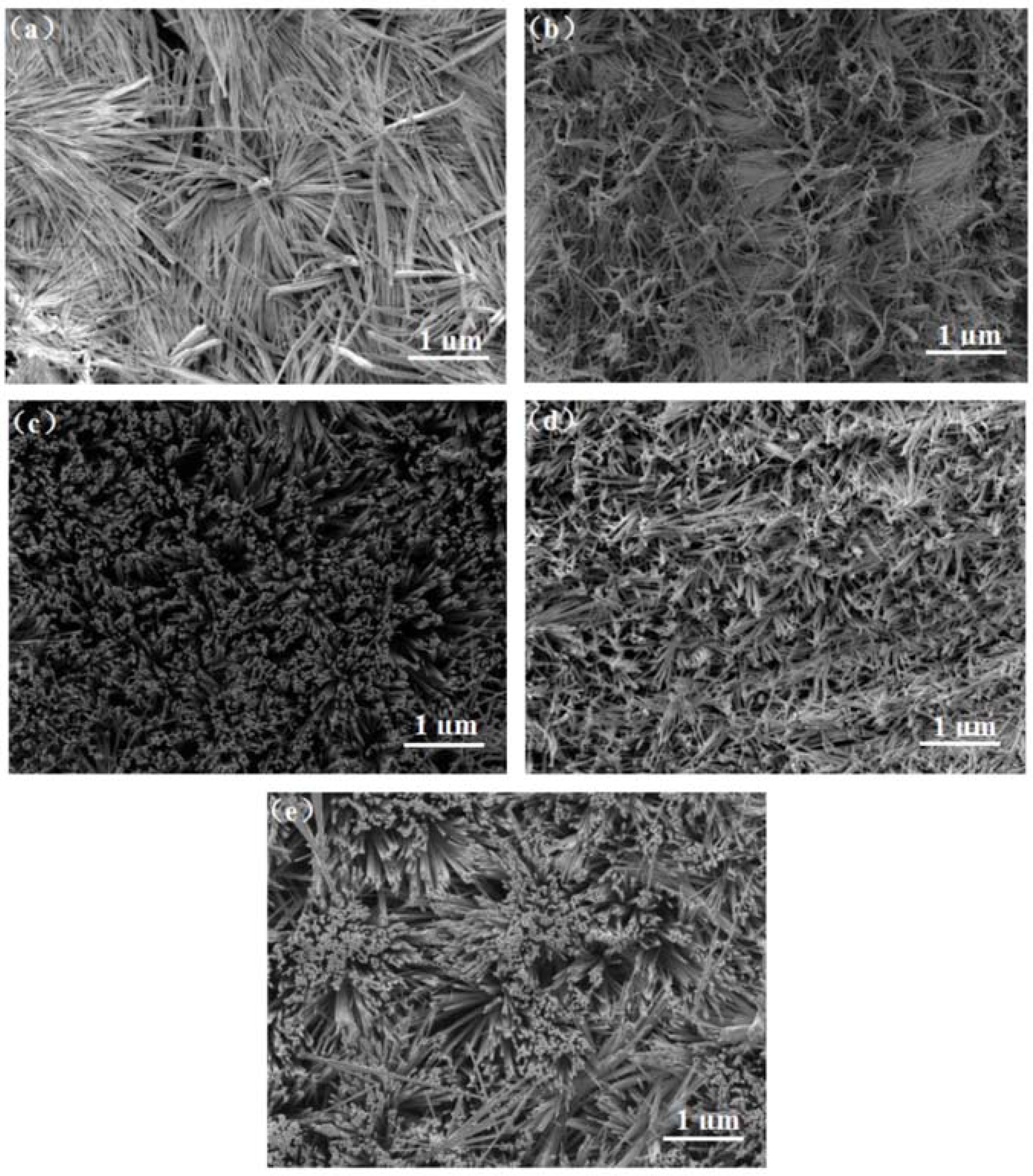 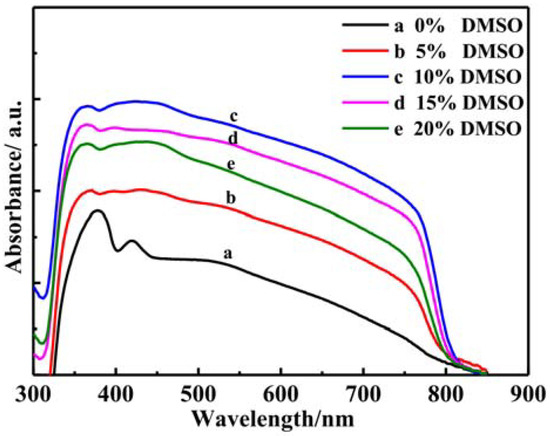