Thermochromic tungsten-doped VO2 thin films were successfully fabricated using a W-V alloy target. X-ray diffraction analyses showed that the W-doped VO2 film had a preferred orientation of (011), and that the doping did not degrade the film crystallinity compared with that of the pure film. X-ray photoelectron spectroscopy and energy-dispersive spectroscopy showed that the doped 0.81 atom% tungsten replaced vanadium in the lattice of the film. The metal–insulator transition temperature of the W-doped VO2 film was reduced to 35.5 °C, which is close to room temperature. Additionally, the infrared transmittance modulation of the W-doped film at λ = 2500 nm reached 56%, indicating an excellent switching efficiency. The damage behavior of the W-doped VO2 film under a femtosecond-laser irradiation was experimentally investigated. Our results revealed that defect-related damages induced by the femtosecond laser are relevant for W-doped VO2 films. This study provides valuable insights into VO2 films for potential applications in laser protection. View Full-Text
Keywords: vanadium dioxide; metal doping; laser-induced damage; thermochromic performance vanadium dioxide; metal doping; laser-induced damage; thermochromic performance
►▼ Show Figures 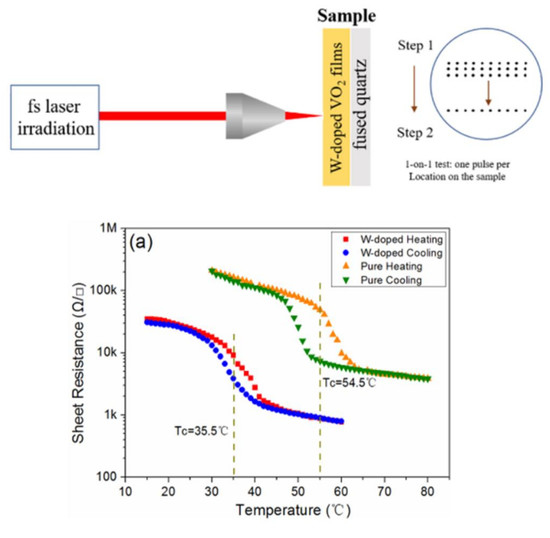