As a type of functional group, azo-derivatives are commonly used to synthesize responsive materials. Cellulose nanocrystals (CNCs), prepared by acid hydrolysis of cotton, were dewatered and reacted with 2-bromoisobuturyl bromide to form a macro-initiator, which grafted 6-[4-(4-methoxyphenyl-azo) phenoxy] hexyl methacrylate (MMAZO) via atom transfer radical polymerization. The successful grafting was supported by Fourier transform infrared spectroscopy (FT-IR) and Solid magnetic resonance carbon spectrum (MAS 13C-NMR). The morphology and surface composition of the poly{6-[4-(4-methoxyphenylazo) phenoxy] hexyl methacrylate} (PMMAZO)-grafted CNCs were confirmed with Transmission electron microscopy (TEM) and X-ray photoelectron spectroscopy (XPS). The grafting rate on the macro-initiator of CNCs was over 870%, and the polydispersities of branched polymers were narrow. The crystal structure of CNCs did not change after grafting, as determined by X-ray diffraction (XRD). The polymer PMMAZO improved the thermal stability of cellulose nanocrystals, as shown by thermogravimetry analysis (TGA). Then the PMMAZO-grafted CNCs were mixed with polyurethane and casted to form a composite film. The film showed a significant light and pH response, which may be suitable for visual acid-alkali measurement and reversible optical storage. View Full-Text
Keywords: cellulose nanocrystals; azo-derivatives; atom transfer radical polymerization; light- and pH-responsive cellulose nanocrystals; azo-derivatives; atom transfer radical polymerization; light- and pH-responsive
►▼ Show Figures 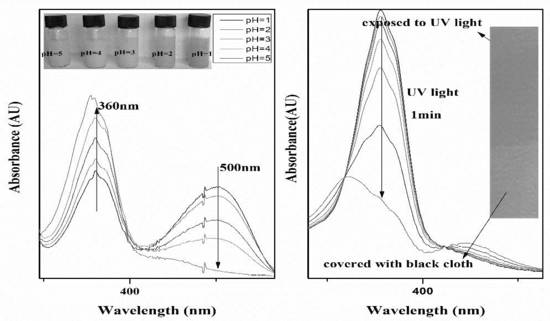