Delphi Prospection on Additive Manufacturing in 2030: Implications for Education and Employment in Spain

Feature-based approaches have been profusely used in the last decades to incorporate domain-specific knowledge in the design and development of technical systems that, according to the new Concurrent Engineering approaches, involves not only the definition of the product, but also of the required manufacturing/inspection/assembly process and the corresponding production system. Although the ability of feature-based modeling to ease and integrate knowledge intensive processes has always been recognised, in practise the different feature-based modeling proposals are strongly dependent on the domain and on the development stage of the solution (conceptual, detailed, etc.). On the other hand, inspection process planning, including the design and selection of the technical system to realize the dimensional and geometrical verification of the manufactured artefacts, has been traditionally considered separately from the rest of the manufacturing process planning, and even also from the product functional specification tasks. In this work, a feature-based framework for inspection process planning, based on a similar approach to the one applied in GD&T (Geometrical Dimensioning & Tolerancing) specification, analysis and validation of product artefacts, is presented. With this work, the proposed framework and feature concept ability to model interaction components belonging to both the product and the inspection system (inspection solution) is proved. Moreover, to facilitate the Collaborative and Integrated Development of Product-Process-Resource, the Inspection Feature has been conceived as a specialization of a generic Feature previously proposed by the authors. View Full-Text
Keywords: feature-based modeling; inspection planning; dimensional and geometrical specification; process specification; collaborative and integrated product-process development feature-based modeling; inspection planning; dimensional and geometrical specification; process specification; collaborative and integrated product-process development
►▼ Show Figures 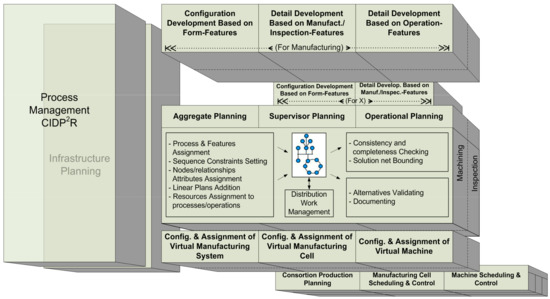