Tissue engineering utilizes the concept of scaffolding to regenerate the bone defects. The technique for addressing these defects that involves the reconstruction or regeneration of bone always desires a temporary porous scaffold. Bone defects that are caused by trauma, congenital malformations, or due to cancerous lesions can best be therapeutically managed by bone tissue engineering scaffolds. The ultimate aim of modern tissue engineering is to replace the traditional medical procedures involving the repair and regeneration of tissues with three-dimensional scaffolds. These scaffolds have a porous surface that serve as a medium, over which cells can grow rapidly and develop into tissues that are viable. The scaffolds with unique morphology and structural architecture encourage the cells to regenerate bone tissues of extra cellular matrix [1,2]. Ideally, scaffolds provide the anatomical support for the multiplying cells to repair the damaged tissues and in the process, undergo gradual degeneration and resorb without harming the resulting tissues. The scaffolds should be porous, biocompatible, biodegradable, and designed accordingly to satisfy the required needs to regenerate or repair the tissues [3,4,5]. The architecture and composition of the scaffolds are such that, it helps in cell attachments, proliferation and differentiation of the surrounding host cells into the defect area on its surface [6,7,8]. The scaffold materials are classified into natural and synthetic biomaterials. The pore architecture and design of the scaffolds influence their mechanical strength. The square design architecture of the scaffold is said to have high strength when compared to other scaffold designs [9]. Factors such as design, micro-architecture, material property, and strength are essential in stabilizing the surrounding microenvironment and the cells adhering to it [10,11,12]. Synthetic scaffold materials have several advantages over the natural materials in terms of high mechanical strength, biocompatibility, biodegradability, and cost effectiveness [13,14,15]. Biomaterials, like glasses and ceramics, are being used as scaffold materials for bone tissue engineering [16].
The polymeric scaffolds have excellent biocompatibility and biodegradability, but lack the ability to withstand the forces acting upon. In order to improve their mechanical strength, many researchers have incorporated graphene derivatives within the polymers. Besides enhancing the physical properties, the graphene derivatives also promote cell proliferation and differentiation, owing to their excellent biocompatibility under limited concentrations.
Graphene is a single layer of aromatic carbon atoms that are arranged in a two-dimensional lattice [17,18]. Research on graphene and its derivatives have gained immense popularity among industries as well as in academia due to its fascinating biomechanical properties. The global interest in this “wonder material” is still growing, especially in the field of bone tissue engineering and biomedical application. Besides, graphene-based materials have also been used widely in the field of biomedicine and drug delivery. Because of its excellent biocompatibility under recommended concentrations, graphene and its derivatives have shown promising results in regulating cell behavior, loading, and releasing of drug genes. Additionally, it is also believed that they help in the differentiation of cells by modifying the surface of the scaffold materials. Graphene improves the adhesion, growth, proliferation, and differentiation of osteoblast [19]. They also possess unique physio-chemical and mechanical properties, which allow for them to be used with broad range devices and in the form of scaffold materials to enhance the proliferation of stem cells for bone regeneration. In this article, we will be emphasizing on the osteogenic influences of graphene derivatives when combined with different biomaterials for utilization in bone tissue engineering scaffolds.

Graphene is a synthetic atomic layer of graphite with SP2 bonded carbon atoms arranged in honeycomb lattice structure. Boehm et al. described graphene in 1986 [20]. In 2004, Geim and Novoselov isolated and identified graphene [21,22]. Graphene remained a popular material that was researched extensively in the past decade for its remarkable electro-conductivity. The graphene and its derivatives have also been noted as components of biosensors or to remotely control cell substrate interfaces [23,24,25,26,27,28]. The derivatives of graphene, (graphene oxide and reduced graphene oxide) have many functional groups on their surface and have unique properties, like graphene (Figure 1). Graphene oxide obtained by the oxidation of graphene, [29] spans the modern trends in bone regeneration [30] because of its unique physical, chemical, mechanical properties, and good biocompatibility [31,32].
Graphene oxide, aids in bone regeneration by enhancing the osteogenic differentiation of progenitor cells. This is accomplished by hydrophobic and electrostatic interactions with the proteins of the microenvironment [31,33,34]. Graphene oxide differs from graphene in that it forms a uniform and stable suspension in water, whereas graphene tends to from aggregates. Uniform stable suspension of graphene oxide helps to infiltrate the porous scaffolds, thereby modifying the surfaces of pore wall [35]. This unique characteristic of graphene oxide makes it the material of choice in bone tissue engineering. The graphene oxide can further be reduced to form the reduced graphene oxide. The graphene oxide has many oxygen containing functional groups on their surface, which facilitates the interaction with cells and biomolecules. Like the graphene oxide, the reduced graphene oxide also contains functional groups on their surface and has a unique electrical property when compared to graphene oxide. Indeed, graphene-based materials have proven to enhance cell growth, cell differentiation, and cell proliferation [36,37].

Various biomaterials have been researched as scaffold materials for bone tissue engineering. Biocompatibility, biodegradability, and sufficient mechanical strength to withstand the forces acting upon are the three key factors to be considered for the selection of a scaffold [38]. Depending on their use and clinical application, the scaffolds can be classified into synthetic or natural, biodegradable or non-biodegradable, and rigid/non-rigid scaffolds [39].

Natural biomaterials that are used in bone tissue regeneration include proteins like silk, collagen, gelatin, fibrin, fibrinogen, elastin, keratin, actin, and myosin. On the other hand, polysaccharides, such as chitosan, hyaluronic acid, alginate, agarose, cellulose, amylose, dextran, chitin, and glycosaminoglycan’s; and, polynucleotides, like DNA, RNA, chitosan, hyaluronic acid, alginate, and agarose are also being utilized [40]. The aforementioned proteins and polysaccharides are routinely used with graphene in the field of tissue engineering and biomedical application [41]. The blending of graphene derivatives with these natural polymers enhances the biological properties of the scaffolds. The most researched polysaccharides are chitosan, cellulose, and alginate, whereas the protein-based polymers frequently studied include silk, collagen, and gelatin [42].

There are various factors to be considered in designing a scaffold for bone tissue engineering. Although some of the biomaterials that were previously used as a scaffold in clinical trials are available in the commercial market, the methodology and their applications are not always well-balanced. Graphene with its unique properties are potentially validated to be used as bone tissue engineering scaffolds. Research on the contribution of graphene derivatives to bone tissue engineering is still modern, and various studies are ongoing to understand them better. Numerous studies in stem cell research are being conducted in order to explore graphene for its osteogenic potential, and proliferation and differentiation of stem cells. Despite its advantages, graphene derivatives are subjected to few challenges. The toxicity of graphene at higher concentrations and non-biodegradable nature needs further investigations. The interaction of graphene with the biologic cells is yet to be further evaluated in depth. Literature should furnish a wide range of comparative studies in the future, between graphene and the other biomaterials before commercializing them in the market. Concurrently, many in vivo studies involving graphene needs to be tested to understand the exact metabolic pathways in which graphene interacts with the microenvironment and bone tissue regeneration. The success of bone regeneration depends on the proliferation of stem cells. The availability and affordability of graphene derivatives has led to the outcome of many researchers conducting studies to validate the proliferation and differentiation of stem cells by the incorporation of graphene derivatives. A remarkable aspect of graphene derivatives is that their chemical nature seems to act on the proliferation of stem cells, raising the possibility of favoring this process by modifying the chemical configuration. Cell-based bone tissue engineering requires a cell component from the appropriate origin that could be able to repair the target tissues and also a biocompatible material that provides a three-dimensional scaffold for the chosen cells. The ideal combination of cell and scaffold sources varies in relation to the target tissue to be created. Moreover, there have been recent advances in biomaterial synthesis and fabrication tools resulting in the creation of functional and bioactive scaffolds that stimulate different cell functions. Titanium and synthetic biomaterials are used for the reconstruction of lost bone tissues. Titanium is considered as a best suitable material for bone regeneration due to its mechanical strength and biocompatibility. Although titanium helps in better osseointegration, there are chances of development of fibrous tissues, which may lead to failure of implants. To overcome this drawback, graphene can be coated onto the surface of implants to enhance better osseointegration and bone formation. Although graphene enhances the bone formation, the long term success of graphene coated on to the implant surface is yet to be researched. Attempts had been made to use Graphene as a carrier for delivery of BMP-2 for better osseointegration. Nonetheless, the outcomes in clinical application are questionable. Graphene derivatives have been tried along with synthetic biomaterials and titanium for modular endoprosthesis in reconstruction of fractured and resected bone segments. Perhaps, studies are still in the early stages of in vitro analysis and in vivo experiments are yet to be conducted. Prospective in vitro and in vivo studies can be helpful to elucidate the full mechanisms of action of the actual available configurations of graphene-based scaffolds. Indeed, the foreseeable future can take advantage of this carbon material to be used as a promising scaffold for bone tissue engineering. 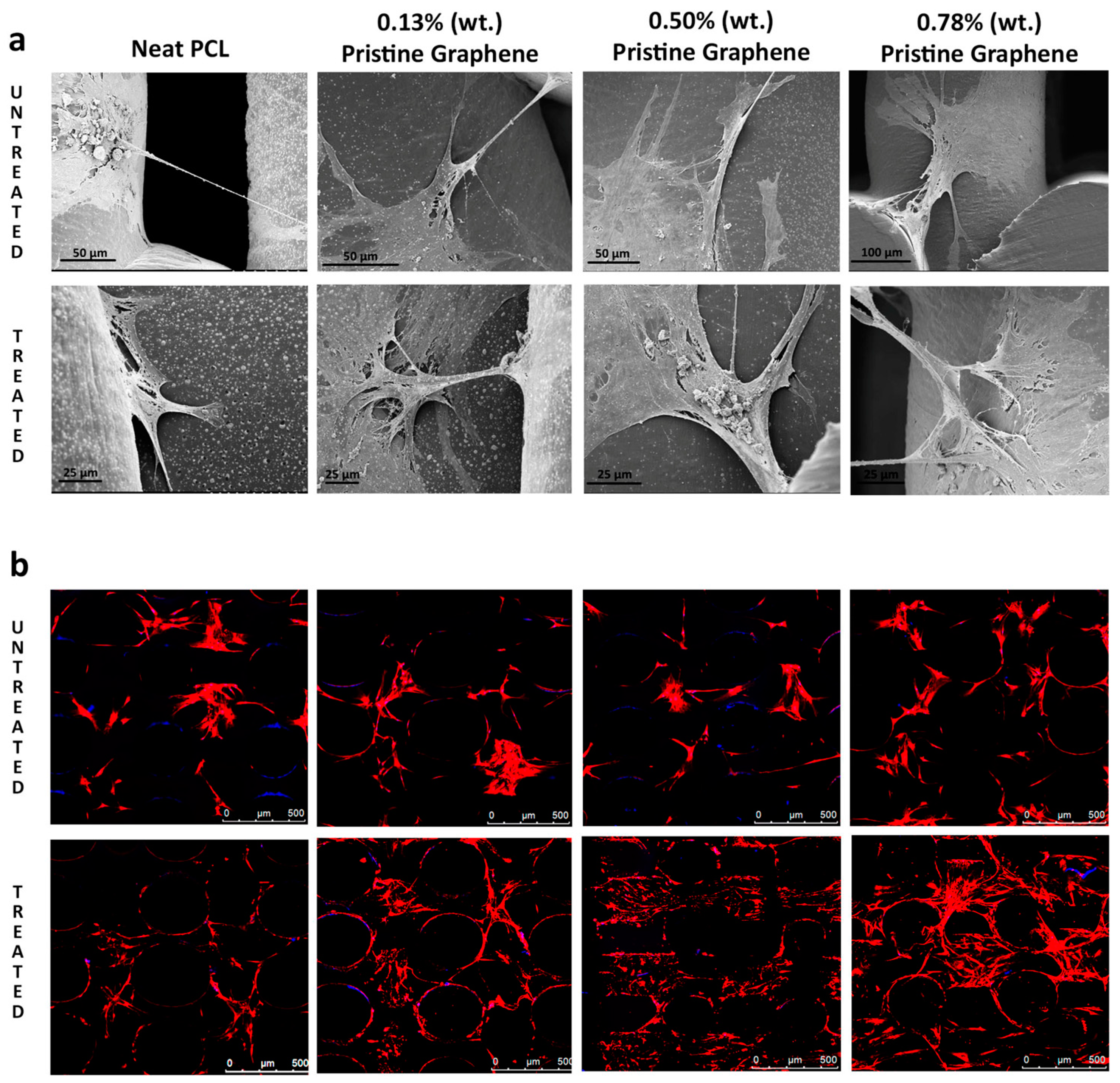 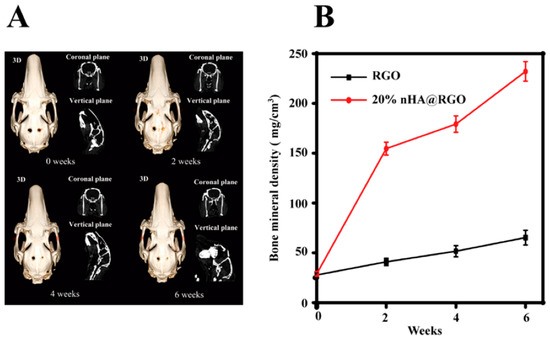 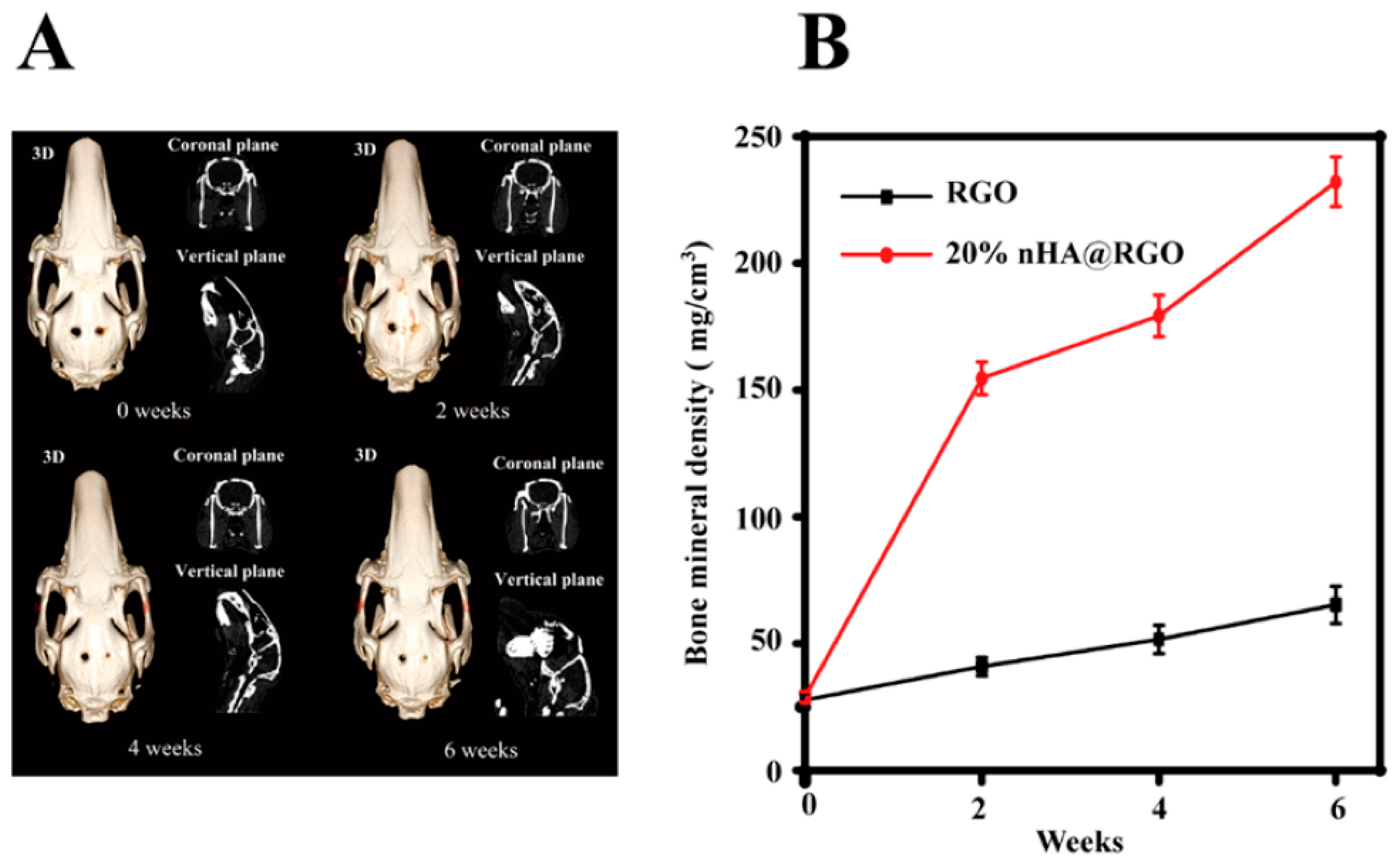 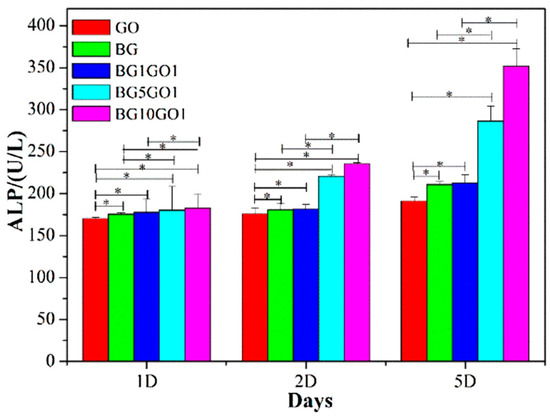 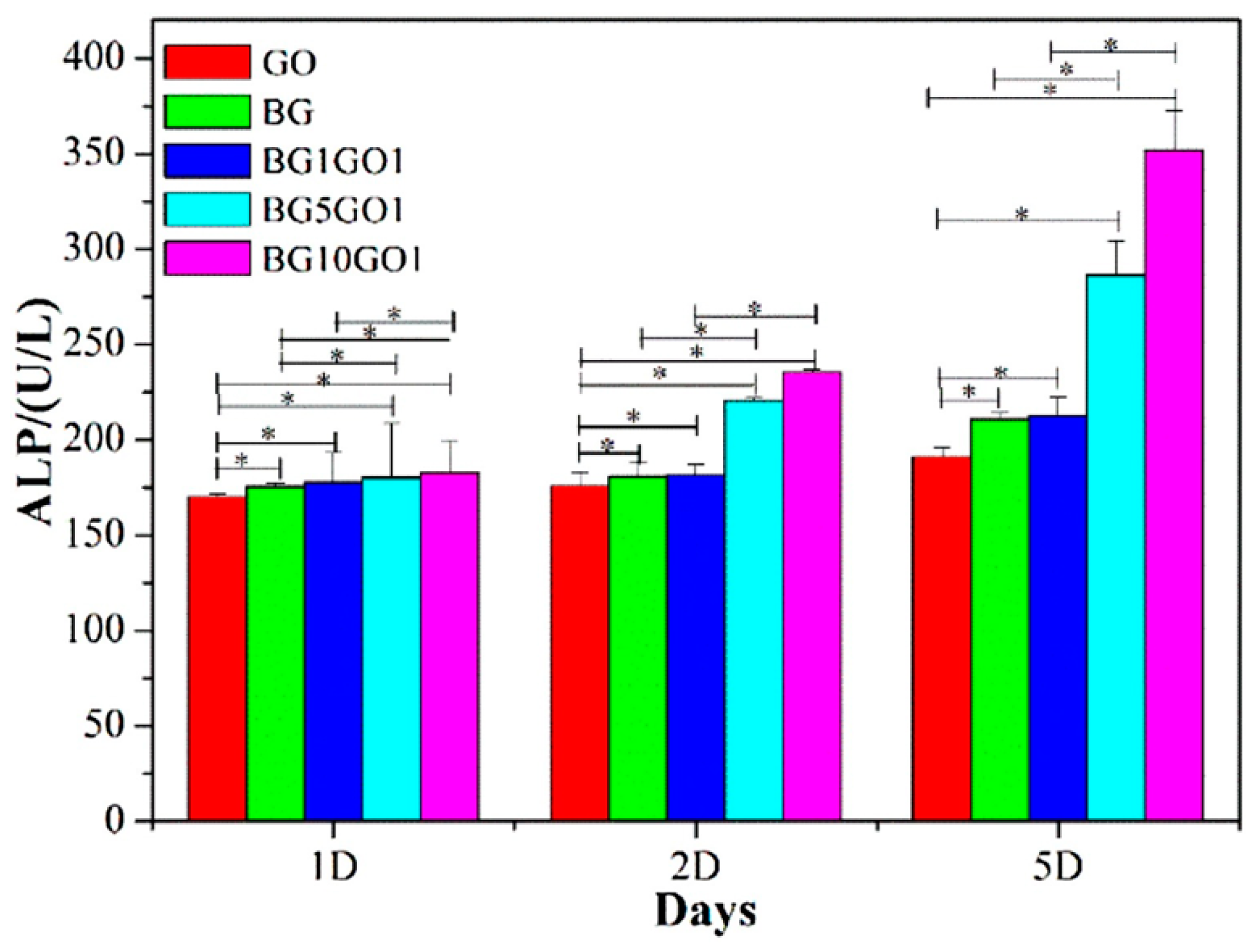