The removal of methylene blue (MB) from wastewater has attracted global concerns. In this study, polymer-functionalized magnetic nanoparticles for MB removal, Fe3O4@SiO2-MPS-g-AA-AMPS (FSMAA), were successfully synthesized by grafting acrylic acid (AA) and 2-acrylamido-2-methyl-1-propanesulfonic acid (AMPS) on the surface of vinyl-modified Fe3O4@SiO2. With various characterization techniques, it was confirmed that the obtained FSMAA had a core–shell structure, a good magnetic property, and plenty of functional groups on its surface. MB adsorption experiments showed that the adsorption capacity of FSMAA was notably enhanced as the grafted monomer concentration and solution pH were increased. The adsorption kinetic data and isothermal data were well described by the pseudo-second-order kinetic model and the Langmuir model, respectively. The maximum adsorption capacity of FSMAA was 421.9 mg g−1 with grafted monomer concentration at 2.0 mol L−1 and solution pH at 9, much higher than those of other adsorbents stated in previous literatures. Based on XPS analysis, surface adsorption mechanism between FSMAA and MB was electrostatic interaction, hydrogen bonding, and hydrophobic interaction. Furthermore, FSMAA was effectively regenerated by acid pickling, and the remaining adsorption capacity was more than 60% after eight adsorption–regeneration cycles. All the results demonstrated the self-made FSMAA was a desirable adsorbent to remove MB from wastewater. View Full-Text
Keywords: magnetic nanoparticles; acrylic acid; 2-acrylamido-2-methyl-1-propanesulfonic acid; adsorption; methylene blue magnetic nanoparticles; acrylic acid; 2-acrylamido-2-methyl-1-propanesulfonic acid; adsorption; methylene blue
►▼ Show Figures 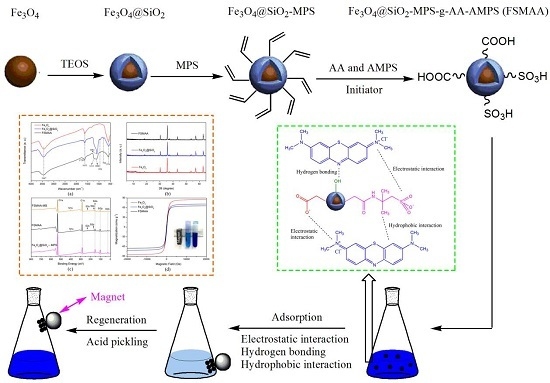