Carbon fiber composites have gained a wide range of applications from sporting products to the aerospace industry [1,2]. In recent years, there is an increasing demand for low-cost carbon fibers in the automobile industry, since the majority of automotive manufacturers have carried out extensive vehicle weight reduction plans, owing to stringent environmental regulations [3]. Carbon fiber can offer a much higher strength to weight ratio compared to steal and aluminum and has found success in the weight reduction of vehicles. However, the automobile industry does not require the ultra-high mechanical properties of carbon fibers, but is rather sensitive to the cost [4]. Accordingly, the U.S. Department of Energy (DOE) has made the development of low-cost automotive-grade carbon fiber its highest priority for materials research [5]. The DOE’s targeted mechanical properties of automobile-grade carbon fibers are a 1.72 GPa tensile strength and a 172 GPa modulus. Meanwhile, the DOE’s targeted price of automobile-grade carbon fiber is $11–$15.4/kg, which is around one order of magnitude lower than current commercial carbon fibers [6]. Considering the tremendous potential market in the automobile industry, a significant amount of industrial and academic efforts have been devoted to lower the cost of carbon fibers.
Polyacrylonitrile (PAN) has been viewed as the most suitable precursor for making carbon fibers among pitch, rayon and cellulose [7]. Commercial PAN-based precursor materials are commonly produced by using polymerization mixtures of AN with more than one co-monomer, for example with methyl acrylate and itaconic acid, to increase the spinnability and mitigate the heat evolution [1,8]. The manufacture of PAN-based carbon fibers typically involves three steps: spinning of PAN precursor fibers, thermal stabilization and carbonization. The thermal stabilization process is the most critical step during which the linear PAN chains convert to thermally-stable ladder-like structures; this step ensures efficient conversion of polymer to carbon with high structural integrity and carbon yield [9]. This process consists of a series of sophisticated chemical reactions such as cyclization of the nitrile groups, dehydrogenation of the cross-linking chain molecules, as well as oxidation reaction [7]. The thermal stabilization reaction is exothermic, and the sudden evolution of heat can partially melt or even ignite the fiber [10]. Thus, the reaction rate of stabilization has to be restricted by lowering the reaction temperature. The stabilization of PAN is also a diffusion-controlled process, which is a function of stabilization time [11]. The large diameter of PAN fibers delays the diffusion of molecules including oxygen and stabilization by-products between the skin and the core of the fiber, and the oxidation on the outer region of the fiber would generate a dense layer and hinder further diffusion of oxygen into the inner region [12]. As the result of the slow reaction rate and hindered diffusion process, thermal stabilization takes a long time (~1 h) and becomes one of the most time- and energy-consuming steps during the preparation of carbon fibers. Thus, among various methods for lowing the production cost of carbon fibers, new oxidation methods using radiation, plasma or ultra-violet treatments to shorten stabilization time have become of great interest in recent years [13].
Electron-beam (denoted as e-beam) irradiation is a cost-effective and environmentally-friendly method that has been widely used in industry for cable insulation crosslinking and sterilizing applications [14]. As early as 1995, Hirt and co-workers had successfully applied e-beam irradiation on PAN fibers to reduce the stabilization time, and they revealed that the e-beam can initiate radical-induced cyclization of PAN polymer chains [9]. Since then, many efforts have been devoted to study the effect of e-beam irradiation on the stabilization behavior of PAN fibers [2,15,16,17,18,19]. However, successful preparation of carbon fibers based on e-beam irradiation pretreatment is rarely reported, and the application of e-beam irradiation to industrial production of carbon fibers is delayed. Shin et al. prepared carbon fibers based on the combination of e-beam irradiation and short thermal treatment, wherein PAN fibers, irradiated by 1000 kGy, were thermally oxidized at 200 °C or 250 °C for 20 or 40 min, respectively [16]. The results of Fourier transform infrared spectrometer (FT-IR) analysis showed that the C≡N peak at 2244 cm−1 almost disappeared after 40 min at 250 °C, while the intensity of the C=N peak at 1628 cm−1 was indicative of an increase in cyclization. Through differential scanning calorimeter (DSC) analysis, thermal treatment at either 200 °C or 250 °C was found to cause a sharp decrease in the majority of exothermic peaks. The tensile strength of resulting carbon fibers was around 2.3 GPa. Recently, Park and co-workers carried out a comprehensive stabilization mechanism study of e-beam-irradiated PAN fibers, and they successfully prepared carbon fibers with a tensile strength and modulus of 2.3 and 216 GPa, respectively, based on a 30 min stabilization time [20]. However, these carbon fibers were prepared based on a batch process, which was typically finished by placing PAN fibers in a cart under the e-beam irradiation source. In practice, research outcomes based on the continuous production method would be more applicable for industrial production of carbon fibers.
In this study, a 12k carbon fiber tow is continuously prepared with the process of e-beam irradiation pretreatment, thermal stabilization and carbonization using a pilot-scale (five tons/year) production line. The effects of e-beam irradiation on the thermal and structural evolution of PAN fibers during stabilization are studied using DSC, FTIR, X-ray diffraction (XRD) and bulk density measurements. Compared to the current industrial carbon fiber production with a 40-min stabilization time, e-beam-irradiated PAN fibers are stabilized in under 24 min, and their degree of stabilization is compared based on density and FT-IR measurements. Finally, the mechanical properties of carbon fibers with irradiation pretreatment are characterized and compared with non-irradiated carbon fibers.

PAN fibers used in this study were SAF 12K PAN copolymer fibers with 92.8 wt% of acrylonitrile (AN), 1.2 wt% of itaconic acid (IA) and 6.0 wt% of methyl acrylate (MA) provided by the Courtaulds, Ltd. UK. Each tow of the fibers consisted of 12,000 filaments.

PAN precursor fibers were continuously irradiated at room temperature with an electron accelerator in air provided by CYG Electronics Co., Ltd. The equipment setup can be found in the Supporting Information, Figure S1. The acceleration voltage used in the experiment was 1.5 MeV, and the electron beam current was 35 mA. PAN fibers were continuously passed under the acceleration gun. The irradiation dose of 800 kGy was determined by the irradiation time of 20 s, which was controlled by the fiber travel speed of 6 m/min.

Differential scanning calorimetry (DSC) conducted in air atmosphere was used to monitor the thermal behavior of two kinds of fibers by a METTLER DSC-1 differential scanning calorimeter. The range of heating temperature was 180–400°C, and different heating rates of 2 °C/min, 5 °C/min, 8 °C/min and 10 °C/min were applied for each sample. The activation energy (Ek) of precursor fibers was calculated from the following Kissinger equation: where Ek is the activation energy (J/mol), β is the heating rate (K/min), Tpk is the temperature of the exothermic peak (K) and R is the ideal gas constant (8.314 J/mol·K).
A Lloyd DC-2 density gradient tube was adopted to measure the bulk density of the stabilized fibers and the carbon fibers.
The X-ray diffraction (XRD) was conducted to characterize the crystalline structure evolution of both precursor fibers using a D/Max-2500 PC X-ray diffractometer with Cu Kα (λ = 0.1542 nm) radiation at a voltage of 40 Kv, a current of 45 mA and a scanning range from 5°–60°.
Fourier transform infrared spectroscopy (FT-IR) with a Nicolet 8700 spectrometer was used to analyze the functional groups of irradiated and untreated PAN fibers. Scanning from 500–4000 cm−1 with a resolution of 4 cm−1 was employed to examine the chemical changes during stabilization. The degree of relative cyclization (RCI(%)) was calculated as , where is the peak intensity of the C≡N vibration at 2243 cm−1 and is the peak intensity of the C=N vibration at 1591 cm−1.
The mechanical properties of carbon fibers were tested on the basis of the D4018–99 standardusing an INSTRON-5567 universal testing machine at a crosshead speed of 10.0 mm/min with a gage length of 150 mm. Eight specimens were tested for each type of carbon fiber. During the specimen preparation, each type of carbon fibers was wound onto a rectangular framework in parallel, and the aligned fibers were impregnated into a mixed solution (the mass ratio of acetone, epoxy 618 resin and triethylenetetramine was set at 20:10:1). Then, samples were cured in an oven at 120 °C for 2 h.

The energy savings of the rapid stabilization process using e-beam irradiation was roughly estimated based on the operation power of the pilot production line in this study. The detailed operation power of the apparatuses is shown in the Supporting Information, Table S1. The stabilization step accounts for ~50% of the total energy consumption of the whole production line. The rapid stabilization process based on e-beam irradiation can save 40% of the energy cost for the thermal stabilization step and save 18% of the total energy cost for the production line. The carbonization process is a relatively fast step that requires less than 3 min. The spinning of PAN fiber is also very fast, and the speed can reach 300–400 m/min. However, the speed of the overall production line has to be limited to around 10–15 m/min due to the long stabilization time. If we can lower the stabilization time, the total production speed can be promoted, and the capacity of each line can be increased; this will enhance the production efficiency and thus further lower the total cost. Meanwhile, the e-beam irradiation of PAN fiber is a fast process, which correlates well with the rapid production of carbon fibers.
It is worth noting that for better comparison of carbon fibers prepared with/without irradiation pretreatment, the current temperature profiles of stabilization were designed for producing standard carbon fibers, which may not be suitable for stabilizing irradiated PAN fibers since there are noticeable differences in the exothermic behavior between irradiated PAN fibers and commercial PAN fibers. Meanwhile, the irradiation dose can be adjusted to further promote the irradiation effect. Thus, there is still room for further decreasing the stabilization time and improving the mechanical properties of i-CFs. Work along these directions is in progress.

J.Y., J.L. (Jie Liu), Z.S. and X.W. conceived of and guided the research. All authors contributed to analyzing and discussing the experiments, and J.Y. finished the main experiment. J.Y., Y.L. and J.L. (Jieying Liang) performed sample preparation and characterization. J.Y. and X.W. wrote the paper with contributions and advice from the other authors.

This research was supported by the National Natural Science Foundation of China (Grant Number 51602016) and the Fundamental Research Funds for the Central Universities (Grant Numbers PYVZ1704, ZY1607). 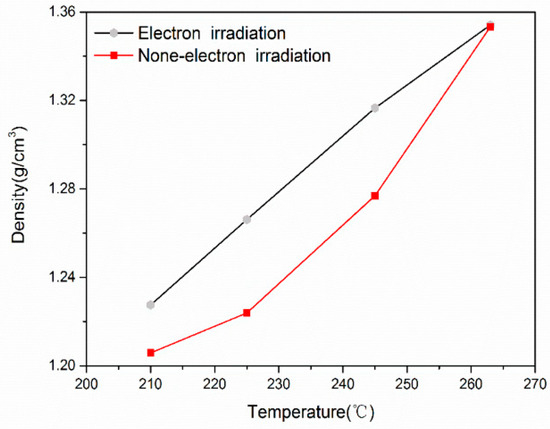 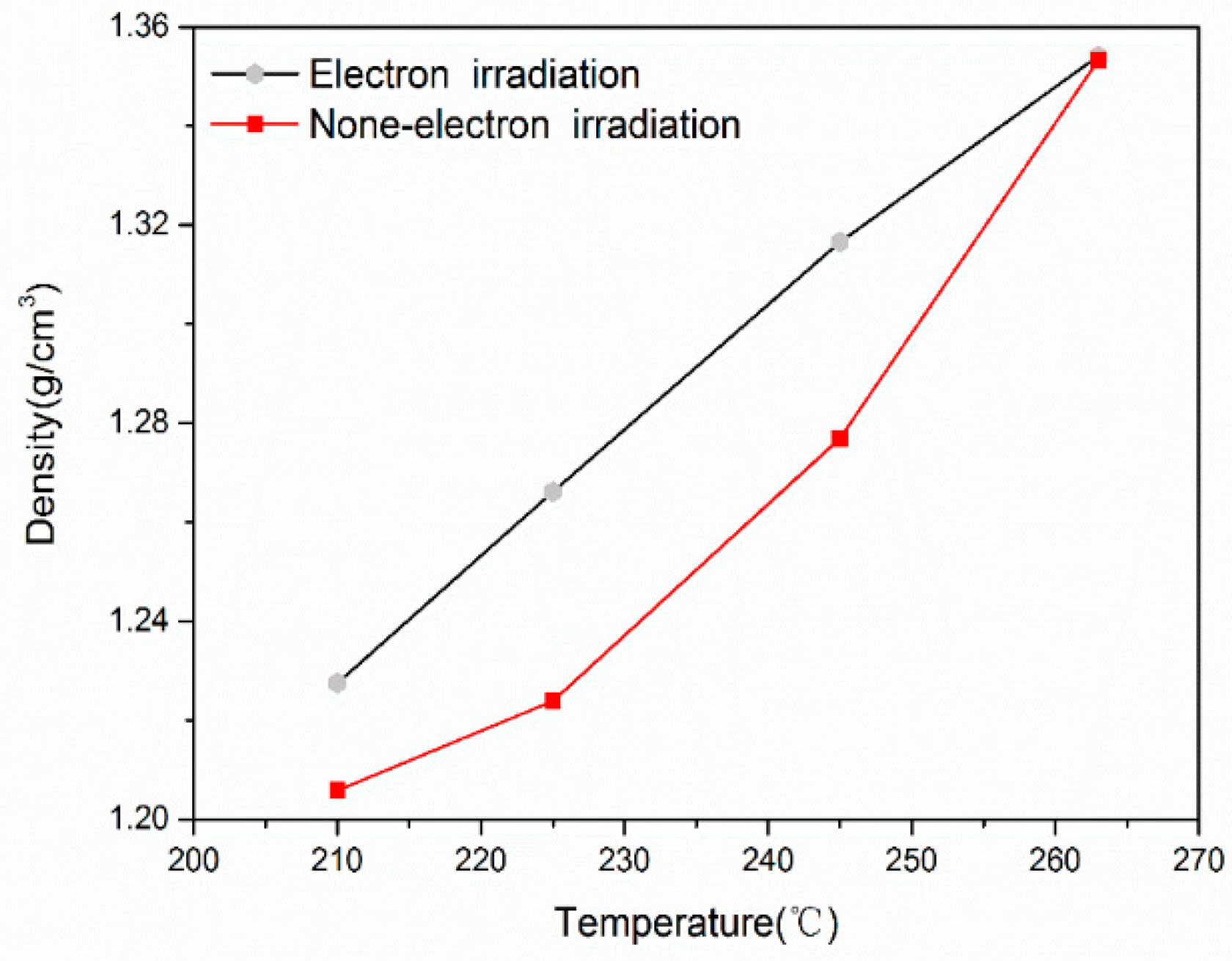 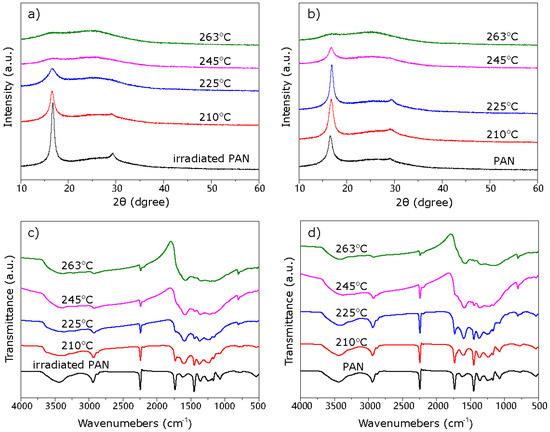