Near β titanium alloys can now compete with quasi-α or α/β titanium alloys for airframe forging applications. The body-centered cubic β-phase can represent up to 40% of the volume. However, the way that its elastic anisotropy impacts the mechanical behavior remains an open question. In the present work, an advanced elasto-viscoplastic self-consistent model is used to investigate the tensile behavior at different applied strain rates of a fully β-phase Ti alloy taken as a model material. The model considers crystalline anisotropic elasticity and plasticity. It is first shown that two sets of elastic constants taken from the literature can be used to well reproduce the experimental elasto-viscoplastic transition, but lead to scattered mechanical behaviors at the grain scale. Incompatibility stresses and strains are found to increase in magnitude with the elastic anisotropy factor. The highest local stresses are obtained toward the end of the elastic regime for grains oriented with their <111> direction parallel to the tensile axis. Finally, as a major result, it is shown that the elastic anisotropy of the β-phase can affect the distribution of slip activities. In contrast with the isotropic elastic case, it is predicted that {112} <111> slip systems become predominant at the onset of plastic deformation when elastic anisotropy is considered in the micromechanical model. View Full-Text
Keywords: polycrystalline β-Ti; elastic anisotropy; elastic/plastic incompatibilities; elasto-viscoplastic self-consistent scheme (EVPSC); slip activity polycrystalline β-Ti; elastic anisotropy; elastic/plastic incompatibilities; elasto-viscoplastic self-consistent scheme (EVPSC); slip activity
►▼ Show Figures 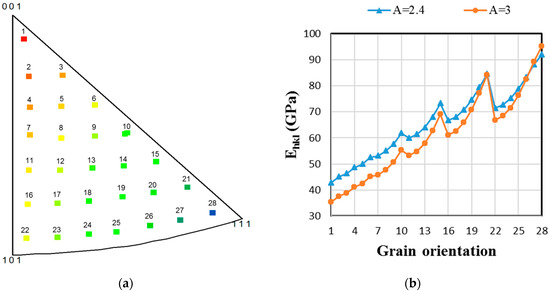