Synthesis of Non-Stoichiometric (TiNb)C0.5 with High Hardness and Fracture Toughness under HTHP

TiC0.5 and (TiNb)C0.5 powders were prepared through mechanical alloying (MA) with Ti powder (purity >99.5%, ~30 μm), Nb powder (purity >99.5%, ~37 μm) and TiC powder (Purity >99.5%, 1–10 μm). The starting materials were purchased from Qinhuangdao ENO High-Tech Material Development Co., Ltd. The powder mixture was sealed in a tungsten carbide (WC) jar (volume: 500 mL) with WC balls in an argon atmosphere. The ball-to-powder weight ratio was 20:1. MA was conducted in a vario-planetary mill (Fritsch, Markt Einersheim, Germany) at a rotation speed of 700 rpm for 18 h. After this, the powders were treated in a vacuum oven at 600–800 °C for 2 h. The as-prepared powders were sintered under high temperatures and high pressures (HTHP) in a hexahedron anvils press (CS-1B, Guilin Guiye Heavy Industries Co., Ltd., Guilin, China). The final consolidated compacts were ground by using a diamond grinding wheel to remove the graphite layer, before the compacts were polished with diamond paste to 0.1 μm.
X-ray diffraction (XRD; D/max-2500PC, Rigaku, Tokyo, Japan) with Cu Kα1 radiation (λ = 0.15406 nm, 40 kV, 200 mA) was employed for phase identification. Rietveld refinements of the XRD patterns were carried out by GSAS program [16]. The average grain size D and strain of grains ε were roughly calculated from the XRD data by using the Williamson–Hall method [17,18,19] according to the following equation:
Bcosθ = (Kλ/D) + (4εsinθ)
where λ is the wavelength of Cu Kα1; B is the full width at half maximum; and K is 0.89.
Fractured surface morphology was observed by scanning electron microscopy (FE-SEM; S-4800II, Hitachi, Tokyo, Japan). Vickers hardness was measured using a Vickers diamond indenter (FM700, Future-tech., Kanagawa, Japan) with a load of 500 g and a dwelling time of 10 s. Fracture toughness (Kic) was measured by the indentation method under an indentation load of 10 kg using the following expression that was derived by Shetty et al. [20]: where Hv is the Vicker’s hardness; P is the indentation load; and l is the crack length. The elastic modulus was determined by the ultrasonic method.
Based on the first principles density functional theory, the CASTEP code of materials studio software (5.0, Accelrys, San Diego, CA, USA) was adopted for XRD simulations of the stoichiometric TiC, NbC, and Ti2C powder. 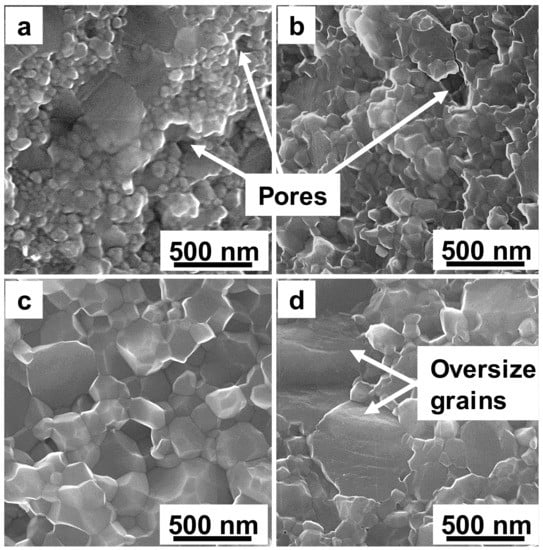 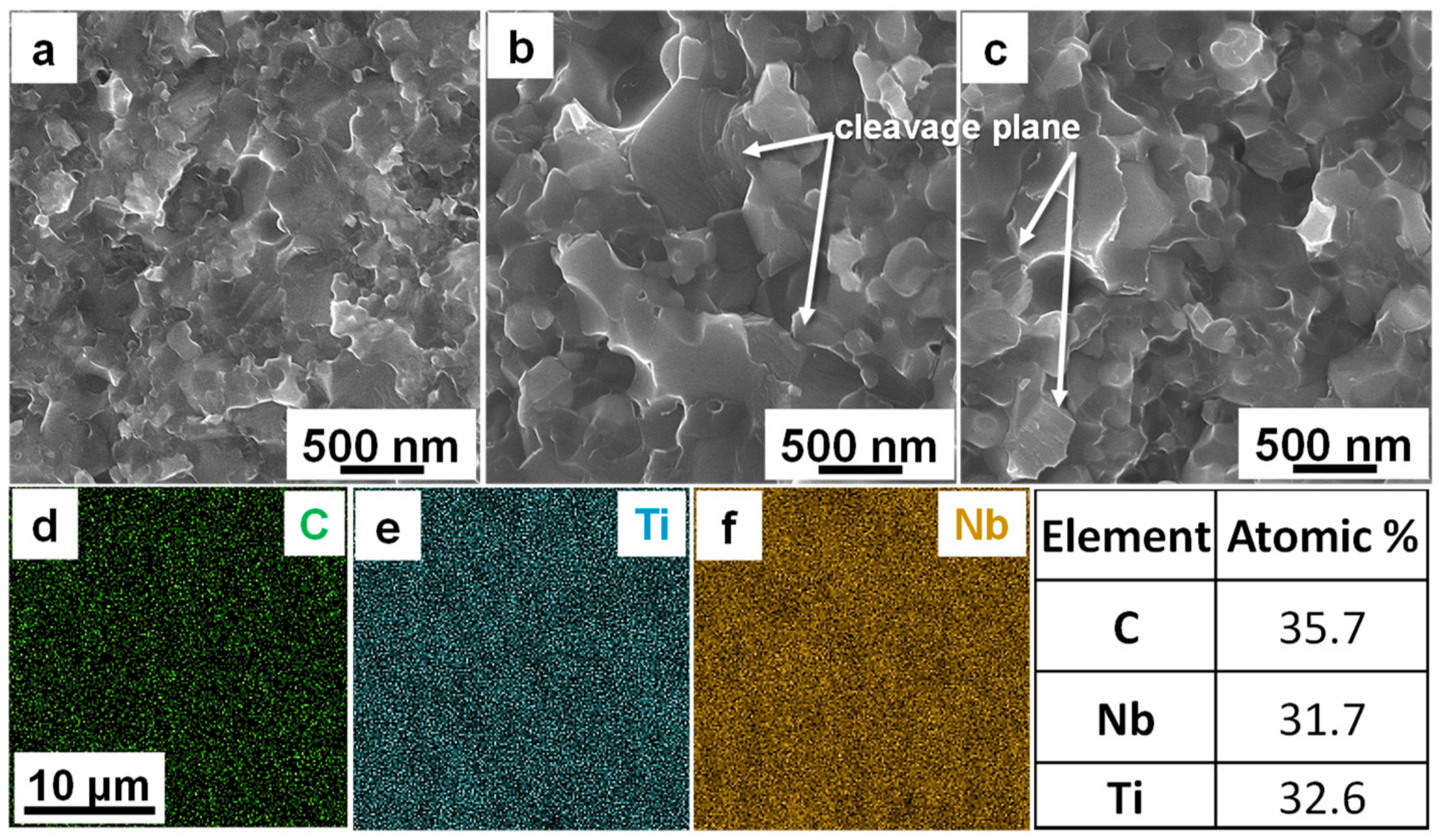