On the Phase Separation in n-Type Thermoelectric Half-Heusler Materials

Electroconductive carbon felt (CF) material, having a permeable structure and significant electroconductive surface, is widely used for electrodes in numerous electrochemical applications such as redox flow batteries, fuel cells, electrochemical desalination apparatus, etc. The internal structure of CF is composed of different lengths of carbon filaments bonded together. This structure creates a large number of stochastically oriented and stochastically linked channels that have different lengths and cross sections. Therefore, the CF hydraulic permeability is similar to that of porous media and is determined by the internal empty volume and arrangement of carbon fibers. Its electroconductivity is ensured by the conductivity of the carbon filaments and by the electrical interconnections between fibers. Both of these properties (permeability and electrical conductivity) are extremely important for the efficient functioning of electrochemical devices. However, their influences counter each other during CF compressing. Increasing the stress on a felt element provides supplementary electrical contacts of carbon filaments, which lead to improved electrical conductivity. Thus, the active surface of the felt electrode is increased, which also boosts redox chemical reactions. On the other hand, compressed felt possesses reduced hydrodynamic permeability as a result of a diminished free volume of porous media and intrinsic channels. This causes increasing hydrodynamic expenditures of electrolyte pumping through electrodes and lessened cell (battery) efficiency. The designer of specific electrochemical systems has to take into account both of these properties when selecting the optimal construction for a cell. This article presents the results of measurements and novel approximating expressions of electrical and hydraulic characteristics of a CF during its compression. Since electrical conductivity plays a determining role in providing electrochemical reactions, it was measured in dry conditions and when the CF was immersed in several non-conductive liquids. The choice of such liquids prevented side effects of electrolyte ionic conductivity impact on electrical resistivity of the CF. This gave an opportunity to determine the influences of dielectric parameters of electrolytes to increase or decrease the density of interconnectivity of carbon fibers either between themselves or between them and electrodes. The experiments showed the influence of liquid permittivity on the conductivity of CF, probably by changing the density of fiber interconnections inside the felt. View Full-Text
Keywords: carbon felt; dielectric liquids; electrical conductivity; hydrodynamic permeability carbon felt; dielectric liquids; electrical conductivity; hydrodynamic permeability
►▼ Show Figures 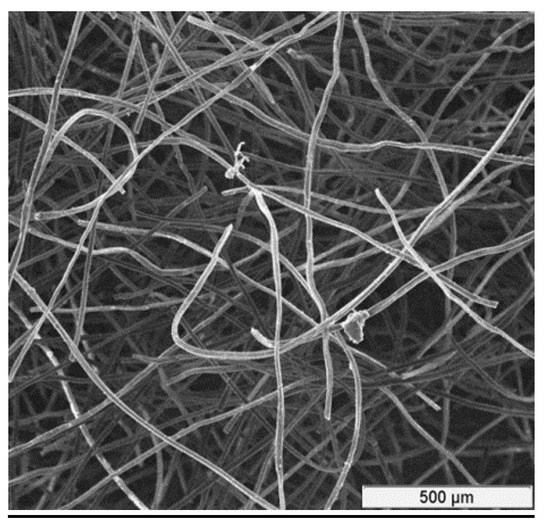