PMMA-g-OEtOx Graft Copolymers: Influence of Grafting Degree and Side Chain Length on the Conformation in Aqueous Solution
Previous Article in Journal

Calcium-silicate-hydrate (CSH)/polymer nanocomposites were synthesized with the layer-by-layer (LBL) method, and their morphology and mechanical properties were investigated using atomic force microscopy (AFM) imaging and AFM nanoindentation. Different sets of polymers were used to produce CSH/polymer nanocomposites. The effect of different factors including dipping time, calcium to silicate ratios (C/S ratios) and pH on morphology was investigated. CSH/polymer nanocomposites made with different sets of polymers showed variation in morphologies. However, the Young’s modulus did not seem to reveal significant differences between the nanocomposites studied here. In nanocomposites containing graphene oxide (GO) nanosheet, an increase in the density of CSH particles was observed on the GO nanosheet compared to areas away from the GO nanosheet, providing evidence for improved nucleation of CSH in the presence of GO nanosheets. An increase in roughness and a reduction in the packing density in nanocomposites containing GO nanosheets was observed. View Full-Text
Keywords: CSH; LBL; AFM image; polymer CSH; LBL; AFM image; polymer
►▼ Show Figures 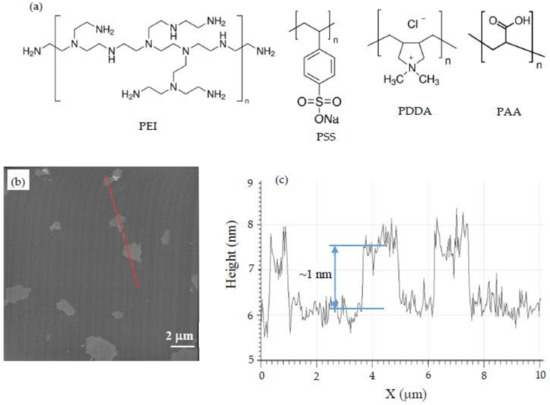