Effects of Substrate Preheating Temperatures on the Microstructure, Properties, and Residual Stress of 12CrNi2 Prepared by Laser Cladding Deposition Technique

A novel additive surface structuring process is devised, which involves localized, intense femtosecond laser irradiation. The irradiation induces a phase explosion of the material being irradiated, and a subsequent ejection of the ablative species that are used as additive building blocks. The ejected species are deposited and accumulated in the vicinity of the ablation site. This redistribution of the material can be repeated and controlled by raster scanning and multiple pulse irradiation. The deposition and accumulation cause the formation of µm-scale three-dimensional structures that surpass the initial surface level. The above-mentioned ablation, deposition, and accumulation all together constitute the proposed additive surface structuring process. In addition, the geometry of the three-dimensional structures can be further modified, if desirable, by a subsequent substractive ablation process. Microstructural analysis reveals a quasi-seamless conjugation between the surface where the structures grow and the structures additively grown by this method, and hence indicates the mechanic robustness of these structures. As a proof of concept, a sub-mm sized re-entrant structure and pillars are fabricated on aluminum substrate by this method. Single units as well as arrayed structures with arbitrary pattern lattice geometry are easily implemented in this additive surface structuring scheme. Engineered surface with desired functionalities can be realized by using this means, i.e., a surface with arrayed pillars being rendered with superhydrophobicity.
Keywords: ultrafast laser; femtosecond; ablation; scanning; additive surface structuring; hydrophobicity ultrafast laser; femtosecond; ablation; scanning; additive surface structuring; hydrophobicity

Laser based additive manufacturing (AM) processes offer unprecedented new opportunities in design and manufacture [1]. In the vast majority of laser additive manufacturing (LAM) processes, high power, continuous, or long-pulsed lasers are commonly used as high-efficiency thermal sources to heat up metallic powders/bulk, and cause melting/cohesion. Ultrafast laser pulses, due to their low onset of thermal effect, on the one hand, are extensively used in the high-precision substractive processing sector, such as surface structuring [2,3], bulk inscription [4,5], and thin-film scribing [6]; however, on the other hand, they find themselves available for a fairly limited amount of applications in LAM. The few existing applications include ultrafast laser additive manufacturing/surface structuring for high melting temperature metals [7,8], laser-induced forward transfer (LIFT) for stacking up miniature building blocks together toward high precision, µm-scale additive processes [9,10], and improving surface finishing of metal parts produced by conventional LAM [11,12]. In this communication, we would like to broaden the spectrum of ultrafast LAM by exploring a concept of ultrafast laser additive surface structuring (LASS): by taking advantage of the material spallation/phase explosion induced by intense ultrafast laser irradiation, the energetically ejected material from the phase explosion can be transferred and accumulated to form a predefined structure. This approach is powder-free, and the structure building material is directly acquired from the substrate where the additive features are to be grown. Moreover, “finishing touches” can be made to the as-built structures by using the very same ultrafast laser, in order to improve the fineness of the surface finishing of the additively grown features. In the following, the concept is explained firstly. Then, as a proof of concept, two types of structures are fabricated using the proposed ultrafast LASS approach. The aspect of added functions at the surface with these ultrafast laser grown structures is also discussed.

A schematic drawing of the laser setup and raster scan strategy is depicted in Figure 1a. For the sake of clarity, the material reported in the Results section is aluminum. In order to verify whether the proposed ultrafast LASS is generic, a few other materials were also chosen for the same test, such as copper and titanium alloy Ti6Al4V, and comparable results were obtained from these materials, too. Nonetheless, a similar test on stainless steel 316L did not yield satisfactory results, suggesting a certain material dependency and limitation of this process. The targets were prepared by conventional metallography procedures with a surface roughness Ra = 20 nm. The micromachining was carried out using a fiber fs laser system (Tangerine HP, Amplitude Systems, Pessac, France). The laser has a central wavelength of 1030 nm with a pulse duration of 300 fs, and a tunable repetition rate from single shot to two MHz. The linearly polarized laser pulses were attenuated, sent through a Galvano scanner, and focused through a 100-mm telecentric f-theta lens. The focused laser spot exhibits a Gaussian profile and the spot diameter (at 1/e2) measures 2ω0 = 22 µm. A raster scanning strategy was used. The overlap ratio of 0.91 between successive laser pulses and successive scan tracks was kept constant for all of the experiments. This relatively high overlap ratio was intended for a homogeneous energy deposition [13]. The laser fluence quoted in this paper is the peak fluence F = 2ε/π ω02, with ε being the laser pulse energy.
The topographical analysis was performed using an optical microscope (OM, Zeiss, Oberkochen, Germany) and scanning electron microscope (SEM, FEI Europe B.V., Eindhoven, Netherlands). Cross-section samples for OM were prepared by wheel-saw halving, cold-setting resin mounting, and mechanical polishing. Cross-section samples for SEM inspection were made using a dual beam system SEM and Focused Ion Beam (FIB, FEI Helios Nanolab 600i dualbeam workstation). Energy-dispersive X-ray spectroscopy (EDX, Brucker, Bremen, Germany) was used to evaluate the surface chemistry change. A Vikers microindentation (Cetim, Saint-Etienne, France) was also performed to access hardness, with a loading force of two N. All of the hardness values quoted in the text were averaged values from five individual measurements. For the wetting test, a three-µL water droplet was deposited on the surface by a microsyringe, and the side-on view was captured by a dedicated camera. The contact angle was deduced from the registered images using software Digidrop (version 13.06.3.12GB, GBX, Romans sur Isère, France).

This report proposes a novel ultrafast LASS approach that is based on intense femtosecond laser irradiation, ablation, and subsequent material ejection. The inhomogeneous distribution of hot plasma induced by intense laser irradiation contributes to the accumulation of ablated species near the ablation area. The accumulation leads to the formation of the additive manufactured structures. As a proof of concept, one-dimensional re-entrant surface structures are fabricated using the approach. The advantage of ultrafast laser refining the additively manufactured structures is also demonstrated. These femtosecond laser additively manufactured geometries, once fabricated on a large scale, can render the underlying surfaces with desired properties such as anisotropic wetting and superhydrophobicity. Although the above results were obtained from aluminum substrates, further study suggests that the method is quite generic and applicable to certain other metals and/or alloys. Supplementary tests have confirmed the applicability of this process mode to copper and titanium alloy Ti6Al4V, at adapted laser fluences. Nonetheless, a similar test on stainless steel 316L did not yield satisfactory results. Numerical analysis suggests that the presence of laser-induced nanoparticles, optical properties such as reflectance and transmission, and material properties such as diffusivity may play a role in the observed discrepancies in stainless steel with respect to the other metal/alloys. It is clear that a better understanding is still required toward the further development of the process. In the meantime, the mechanical strength of these structures needs to be characterized quantitatively. Surface functionalization, especially potentials in adding superomniphobic (hydrophobic and oleophobic at the same time) properties to an engineered surface, will be explored. 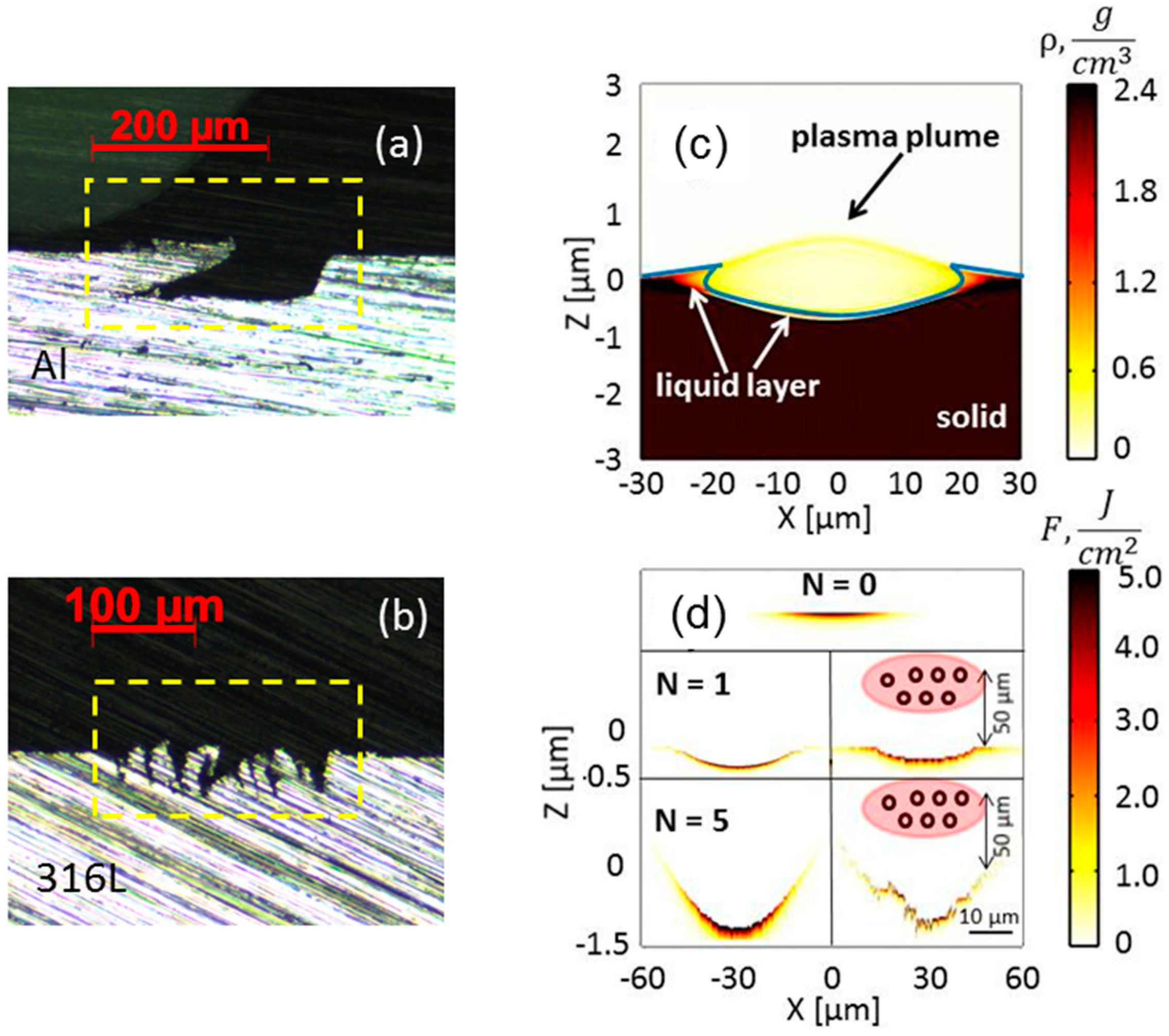