A series of 12-, 14-, and 16-carbon chain length 1-alkyl-3-methylimidazolium ([CnMIm]+) and nitrate ([NO3]−) ionic liquid crystals was simulated at constant atmospheric pressure (1 atm) in semi-isotropic or isotropic Parinello-Rahman simulation boxes with periodic boundary conditions. As discussed below, we performed temperature sweeps from 300 to a maximum of 600 using an ionic-liquid-modified OPLS-AA force field [33,34] in GROMACS 2016.3 [49], which contrasts with previous investigations using force fields such as CL&AP [50] or GAFF [51].
The energy of these systems is calculated from several separate terms, based on harmonic bonds and angles, Fourier series-based torsions, and nonbonded interactions including Coulombic and Lennard-Jones terms. The functional form for the potential energy, E, of OPLS [44] is shown in Equation (1), in terms of the length of bond, r, angle between bonds, , and torsional (or dihedral) angle, . The harmonic constants, and , determine the strength of bonds and angles, respectively, around the minimum values of and . The Fourier coefficients, , define the torsional interaction strength within the molecules. The nonbonded interactions include the partial atomic charges, q, multiplied by the elementary charge, e, as well as the well depths, , and diameters, , of the Lennard-Jones potential for all particles.
To allow appropriate relaxation of the layered phases, semi-isotropic pressure coupling is used to allow fluctuations within the layers (in the x- and y-directions) to decouple from the z-direction. To ensure proper representation of the fluid phase, an isotropic coupling is initiated after layers have melted. In these cases, the box dimensions from the previous temperature were used along with a constant pressure–constant temperature simulation to observe the isotropic liquid. Preliminary simulations using a fully charged model exhibited an overly stable crystal phase which was not observed to melt at temperatures less than K. Thus, in order to predict material properties, the charges were uniformly scaled by 0.8, a modification commonly adopted in simulations of ionic liquids [35,52]. We found that this choice of scaling yielded behavior most consistent with prior studies [45,53,54]. However, the need to make such adjustments is indicative of inaccuracies in the force-field parameterization which necessitate eventual correction or reparameterization for ionic liquid crystalline systems. Importantly, we stress that while such a scaling may more accurately reproduce phase behavior and material dynamics, accurate resolution of charge transport and conductivity should retain , and for these purposes the force balance should be corrected through other means [41].
To probe a range of temperatures, the systems were set up in a proposed crystal configuration (see Figure 2) and equilibrated for 20 ns at 300 , before increasing the temperature by discrete steps of 25 up to 600 . The initial configuration is created by minimizing a single pair of ions and then copying and rotating in each of the Cartesian axes of the molecule, to acquire a unit cell of 8 ion pairs, with a point group of . This is then copied and translationally arranged into 2 layers of molecules, for a total of 512 ion pairs. This does not necessarily correspond to an equilibrated structure of the full system, particularly as multiple potential ionic arrangements are possible in crystalline states of ionic liquid crystal species [55], but merely provides a good starting point for investigations of layered structures. A “pre-conditioning” simulation of 5 ns at the starting temperature allows the hypothetical crystalline state (at 300 ) to equilibrate the system partially before production simulations. The systems were allowed to equilibrate for 20 ns, during the initial temperature ramp, before increasing to the next temperature, in series. Data from each temperature step were generated starting from the final configuration of the previous (lower) temperature, to allow for a more gradual thermal relaxation. Then, each temperature was allowed to equilibrate for an additional 280 ns, in parallel, for a total simulation time of 300 ns at each temperature. This ramping scheme followed from a coarse-grained simulation of similar molecules [21] using discrete changes in temperature, followed by further equilibration.
All simulations were run with a timestep of 1 fs, using a leap-frog integrator (“md” in GROMACS) and a Parrinello-Rahman barostat, with time constants of 2 ps and 1 ps, respectively. The compressibility was assumed to be that of water, or bar. These parameters are standard molecular dynamics values for fully atomistic simulations. As the initial configuration was set up to be somewhat unphysical, the box sizes quickly converged on more physical values. Since the system is symmetric around the x- and y-directions, the aspect ratio of these dimensions was set to unity, while the z-direction’s initial value was based on the length of the molecule when equilibrated in vacuum.

A fully atomistic investigation into the phase behavior of an imidazolium-based ionic liquid crystal series was performed. At these lengths of alkyl side chains, three distinct phases are observed for temperatures between 300 and 600 : crystalline, smectic-A, and an isotropic liquid. The length of the alkyl chain plays an important role in defining the conditions under which these molecular systems change phases. Using an all-atom model allows for greater transferability at a small computational cost, since many ionic liquid species were parameterized with the goal of interoperability between species.
While the general trends of the transition temperatures are correct, there are differences between this work and previous investigations [21]. The main source of disagreement is the type of model used: all-atom versus coarse-grained. Prior to this work, fully atomistic simulations of this degree have not been pursued. In addition, there may be added entropy due to the number of additional atoms to simulated. However, the trends for these long molecules extrapolate to suggest that [C10MIm][NO3] does not have liquid crystal-like behavior, which is supported by previous investigations [45]. Importantly, we also observe an interesting dynamic behavior just prior to the crystalline–smectic transition which could be the hallmark of another phase or an intriguing metastable state; more detailed study is necessary to understand this state completely. While at even higher temperatures, there may be several non-layered mesophases that these systems exhibit; we do not observe any significant thermodynamic or structural changes aside from the crystalline–smectic and smectic–isotropic transitions for the temperatures studied here. Thus, due to the high temperatures needed to observe these phases, the characterization of these phases is likely of less practical interest.
Materials of this class may prove useful in various applications, such as forming a structured medium for batteries where the conductivity in the different directions can be tuned. At the specified temperatures, the charged moieties are confined to thin layers, with essentially no transfer between layers, which directs the mobility of ions. While the motions of this material were characterized here, the addition of other ions will require further investigations into diffusive transport through these materials.

M.J.Q. and J.K.W. designed the study, performed the research, analyzed the data and wrote the paper. 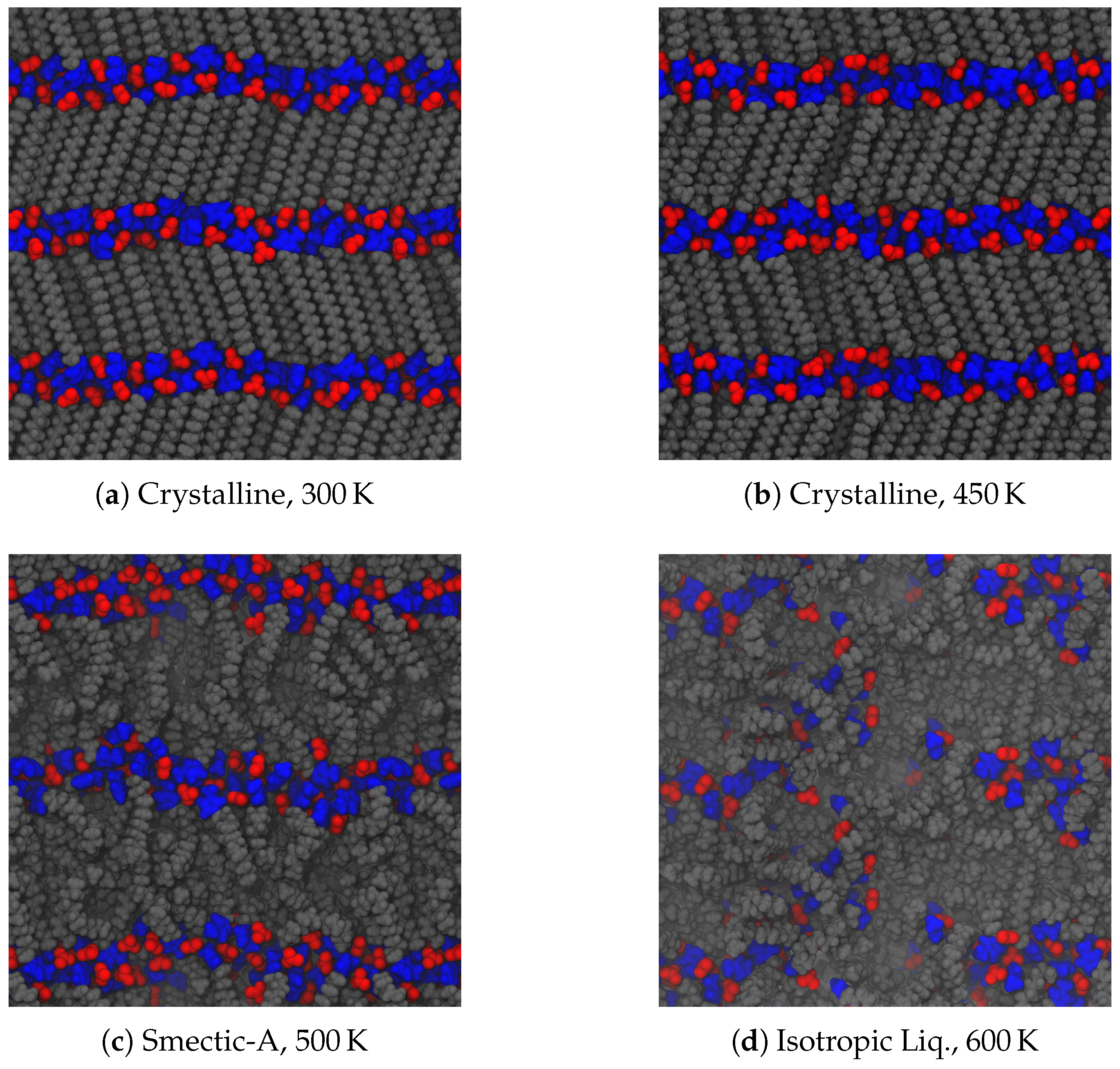