In this work, the characterization of the assembly of a steel shaft into a γ-TiAl part for turbocharger application, obtained using Electron Beam Welding (EBW) technology with a Ni-based filler, was carried out. The Ti-48Al-2Nb-0.7Cr-0.3Si (at %) alloy part was produced by Electron Beam Melting (EBM). This additive manufacturing technology allows the production of a lightweight part with complex shapes. The replacement of Nickel-based superalloys with TiAl alloys in turbocharger automotive applications will lead to an improvement of the engine performance and a substantial reduction in fuel consumption and emission. The welding process allows a promising joint to be obtained, not affecting the TiAl microstructure. Nevertheless, it causes the formation of diffusive layers between the Ni-based filler and both steel and TiAl, with the latter side being characterized by a very complex microstructure, which was fully characterized in this paper by means of Scanning Electron Microscopy, Energy Dispersive X-ray Spectroscopy, and nanoindentation. The diffusive interface has a thickness of about 6 µm, and it is composed of several layers. Specifically, from the TiAl alloy side, we find a layer of Ti3Al followed by Al3NiTi2 and AlNi2Ti. Subsequently Ni becomes more predominant, with a first layer characterized by abundant carbide/boride precipitation, and a second layer characterized by Si-enrichment. Then, the chemical composition of the Ni-based filler is gradually reached.
Keywords: γ-TiAl alloys; electron beam melting; joining; electron beam welding; nanoindentation γ-TiAl alloys; electron beam melting; joining; electron beam welding; nanoindentation

In recent years, the aerospace and automotive industries have been showing great interest in gaining control over polluting emissions in the environment. For this reason, there is the need, as a primary prerequisite, to decrease the weight of components in order to achieve reductions in terms of fuel consumption, emissions and costs. In addition, the decrease in component weight would cause the reduction of centrifugal forces that rotating components are subjected to [1].
In this scenario, the adoption of Titanium Aluminides, i.e., γ-TiAl alloys, as structural materials appear desirable—including for turbine blades, turbocharger wheels and valves—replacing Nickel-based superalloys [2,3,4]. In fact, γ-TiAl alloys show very promising properties, including high specific strength, retention of high specific modulus at elevated temperatures, and good corrosion and oxidation resistance, ensuring a reduction in weight of 50%, with a density of about 4 g/cm3 compared to about 8 g/cm3 for Nickel-based superalloys [5,6].
Considering these properties, γ-TiAl alloys could compete with superalloys in aerospace and automotive applications. However, the benefits derived from the weight reduction are useless when considering the manufacturing costs associated with the production of TiAl components. In fact, their poor machinability and brittleness make them non-competitive in such applications [4]. This problem has pushed researchers to develop the alternative manufacturing methods Net Shape and Near Net Shape.
Additive manufacturing—in particular Electron Beam Melting (EBM)—seems a promising choice for the production of TiAl [7,8,9,10]. Indeed, this technology allows the production of dense final components, even those of great complexity, reducing most of the post-processing related to traditional manufacturing technologies. A bed of spherical powder with the right thickness is distributed on a platform where an electron beam selectively melts the powder. The component is fabricated layer by layer in this way. In addition, with proper tuning of the process parameters, it is possible to obtain a fully densified part with a homogeneous equiaxed γ-microstructure [10,11]. On the other hand, the EBM manufacturing process is considered a Near Net Shape process due to the external roughness Ra obtained of about 30 µm; thus, the presence of a sufficient overstock material is necessary for subsequent post-EBM machining and finishing processes.
Regarding the automotive field, the main application for Titanium Aluminides is turbocharger wheels, coupled with steel shafts. In the case of turbocharger applications, also, the reduction in weight compared to nickel-based superalloys implies an increase in engine efficiency and, consequently, a reduction in emissions and fuel consumption [12,13].
The joining of such dissimilar materials can be achieved through only a few techniques thus far reported in the literature. Ding J. et al. [14] proposed the direct joining of γ-TiAl turbocharger (Ti-46Al-2Cr-2Nb at %) to a 40Cr steel shaft (Fe-0.4C-1Cr-0.7Mn-0.3Si wt %) with Electron Beam Welding (EBW), trying to obtain a sound joint by modifying the welding parameters, such as heat input. Dong H. et al. [15] studied the joining of γ-TiAl alloy (Ti-43Al-2Cr-Zr-Fe at %) to 42CrMo steel (Fe-0.43C-1.09Cr-0.67Mn-0.31Si-0.2Mo wt %) through direct friction welding, examining the mechanical properties and the obtained microstructure. On the other hand, brazing of TiAl is more difficult than that of common metallic materials, because of its reactivity, which can cause the formation of secondary phases. Noda T. [16] suggested the induction brazing method in an Ar atmosphere as a valid technique for joining the steel shaft to the TiAl turbocharger wheel, with a silver-based alloy as filler material. Tetsui T. et al. [17,18] investigated the joining of a TiAl alloy (Ti-47.1Al-7.8Nb-0.98Cr-0.47Si at %) to a steel shaft, with Incoloy 909 (Fe-38Ni-13Co-2Ti-5Nb wt %) as insert component to mitigate the thermal expansion coefficient between the TiAl alloy and the steel. Specifically, the joint between this insert and the steel rod was realized by EBW, instead of the joint between TiAl and the insert being obtained by brazing. In the latter case, different filler materials were investigated as possible candidates, such as silver, gold, palladium, titanium and nickel alloys.
In this work, a joint trial was realized between a TiAl cylinder (simulating a TiAl turbocharger wheel) and a real CrMo steel shaft. Considering all the above reported findings in the literature about joining, this was accomplished by direct EBW with a nickel-based filler material. The adoption of EBW was dictated by the possibility of heating and melting only the precise location of the filler, thus reducing the deformations of the heat-treated zones and the thermal residual stresses [14,19]. The aim of this work is the characterization of the joint trial from a microstructural point of view, trying to evaluate the diffusive interfaces and new phases generated during the joining procedure.

The TiAl-based alloy used in this work has a nominal chemical composition of Ti-48Al-2Nb-0.7Cr-0.3Si (at %) and is called RNT650 [16]. The TiAl cylinder (10 mm in length and 15 mm in diameter) was produced at the Fraunhofer Institute for Manufacturing and Advanced Material in Dresden by EBM technology using an Arcam A2X machine (Arcam AB, Mölndal, Sweden) [20]. The TiAl part was joined to the steel shaft in the as-EBM condition after proper machining of the part to be welded. The machining was performed in order to produce a cylinder with a low roughness level, fitting the steel junction region, also taking into account the dimensional tolerance necessary to insert the filler material foil.
The shaft material employed was a CrMo steel alloy to JIS SCM435H with nominal composition 0.35C, 1Cr and 0.25Mo (wt %). The steel shaft was received machined to the final configuration for the assembly.
The joint trial was produced, simulating the existing assembly in a real turbocharger, as shown in Figure 1.
The selected filler alloy was the METGLAS® MBF-30; an amorphous nickel-based braze alloy with 4.5Si, 3.2B and 0.06C (wt %). The brazing temperature was >1085 °C, with solidus and liquidus in the range 984–1084 °C, which is suitable for brazing ferrous materials and nickel alloys [21]. The nickel alloy, in the form of 40 µm foil sheet, was delivered to TWI Ltd (Great Abington, Cambridge, UK), who laser cut the foil to adapt it to the cylinder and the shaft, and executed the welding of the three materials using a Hamilton Standard high-voltage EB welding machine (PTR, Enfield, CT, USA). The welding was performed using a localized, diffuse heat source provided by a defocused electron beam positioned either side of the filler line, thereby locally heating the steel and TiAl parts above the filler liquidus, melting the Ni foil by conduction and forming a joint at the planar interface at the end of the rotor wheel. The EBW process was carried out by TWI Ltd.
The evaluation of the joint consisted of microstructural observation with an optical microscope (Leica DMI5000 M, Leica, Wetzlar, Germany), Scanning Electron Microscope (SEM) (Phenom XL, Phenom-World BV, Eindhoven, The Netherlands) with a fully integrated Energy Dispersive X-ray Spectroscopy (EDS) detector, and Field Emission Scanning Electron Microscope (FESEM) (Zeiss Merlin, Zeiss, Oberkochen, Germany) equipped with an INCA Oxford EDS detector. The samples for microstructural analysis were previously ground with SiC papers and then polished with diamond paste up to 1 µm. For the TiAl microstructural evaluation, Kroll′s etching was used. The nanomechanical properties of the joint were determined through nanoindentation measures (Hysitron TI 950 Triboindenter, Hysitron-Bruker, Minneapolis, MN, USA). The diamond indenter was a Cube Corner tip with a low load of 0.4 mN and a dwell time of 5 s; in this way, it was possible to reduce the distance between each indentation up to 0.5 µm, and realize a 17 × 33 grid.

This study was an initial investigation of the feasibility of a joint trial between TiAl and steel parts using a Ni alloy as filler material. The following conclusions can be deducted:

-
A promising quality of the joint was observed by optical and electronic microscopy, in that there were no cracks, and only a limited number of voids, which an optimization of the joining process parameters could reduce or even eliminate.
-
The microstructure observed in the TiAl part of the joint was the typical EBM equiaxed gamma microstructure, meaning that the EBW process did not affect the TiAl microstructure. It is necessary to point out that these joints were produced using the TiAl part in its Electron Beam additive technology condition. For the investigated applications, it would be necessary to produce the joints using a heat-treated TiAl part and heat-treated steel shaft, because performing the heat treatment after the joining process would affect the properties of the different parts of the assembly.
-
The welding process causes the formation of diffusive layers between both Ni and steel and Ni and TiAl, with the latter side being characterized by a very complex microstructure, which has been fully characterized in this paper.

Further studies must be focused on the mechanical characterization of these joints. 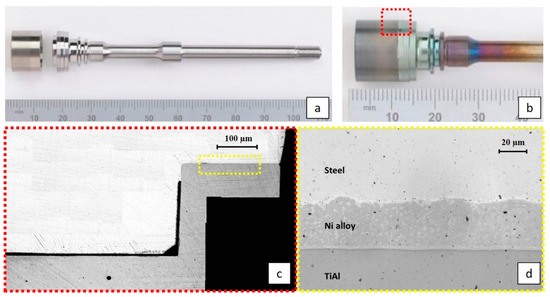 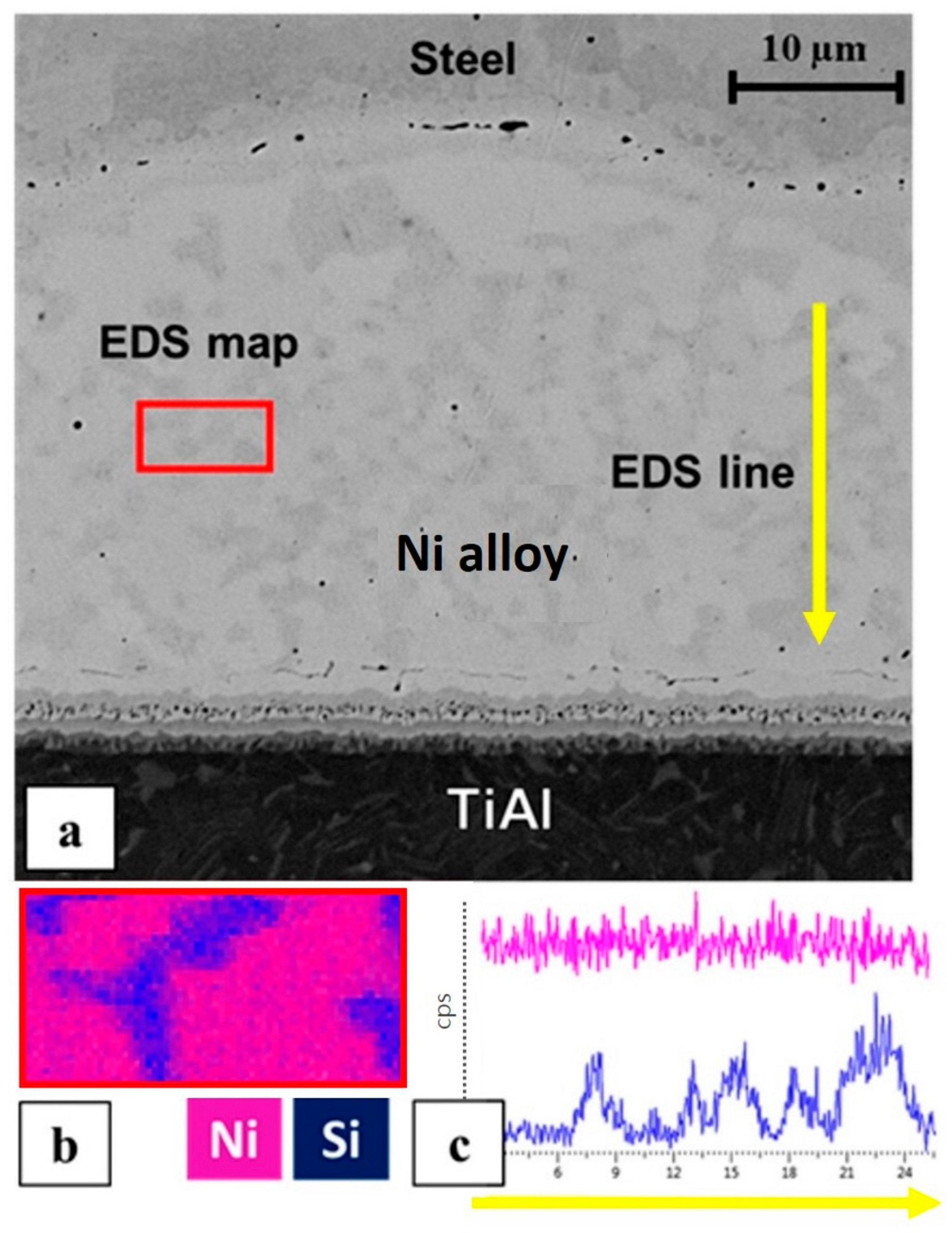 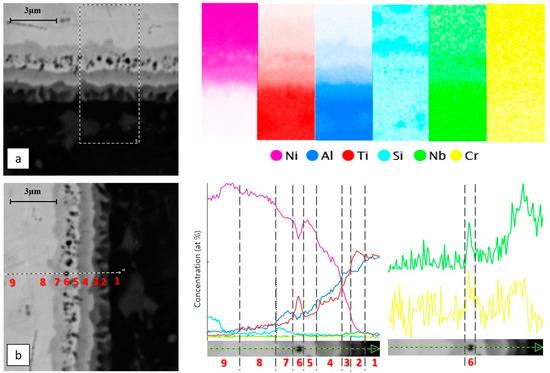 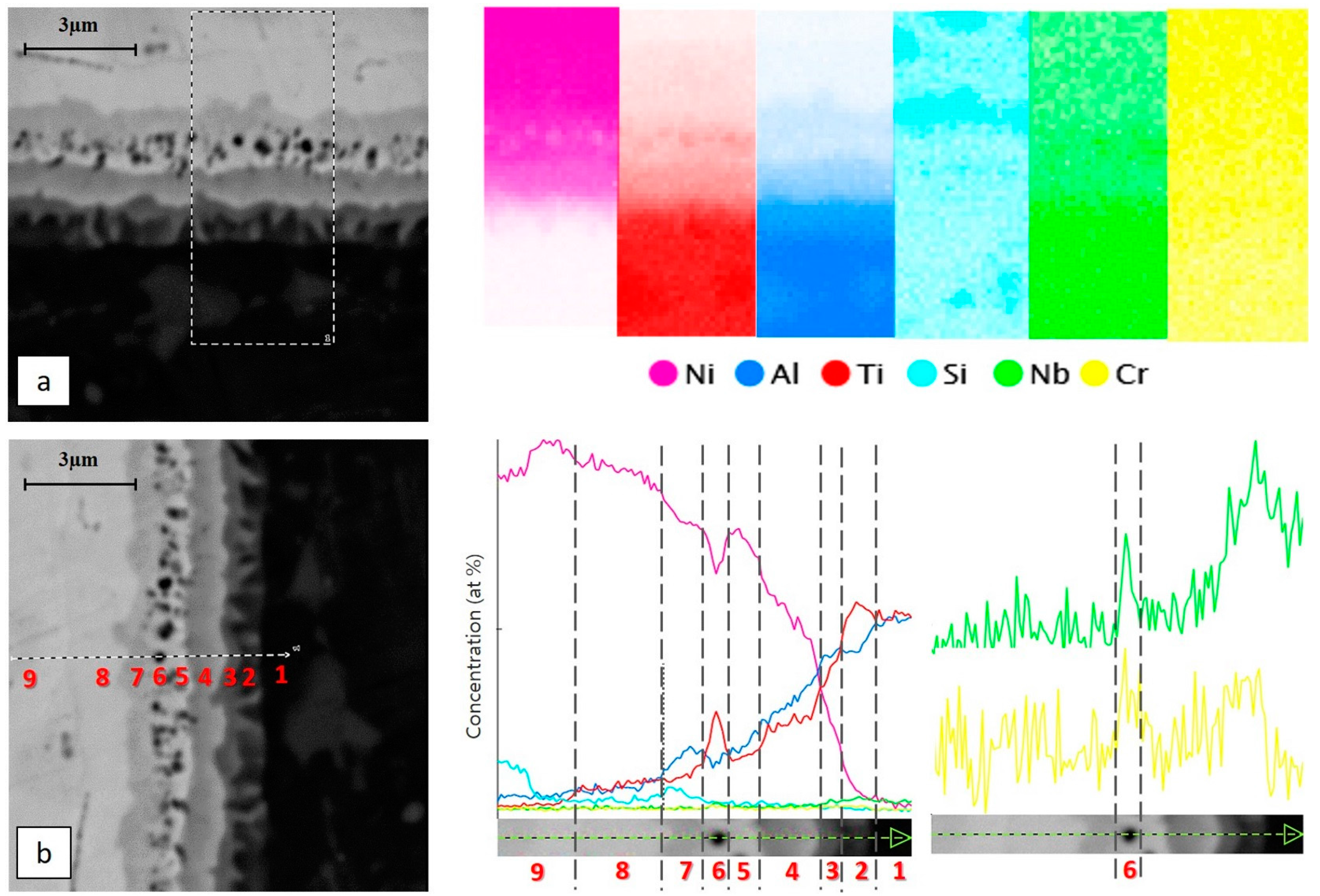 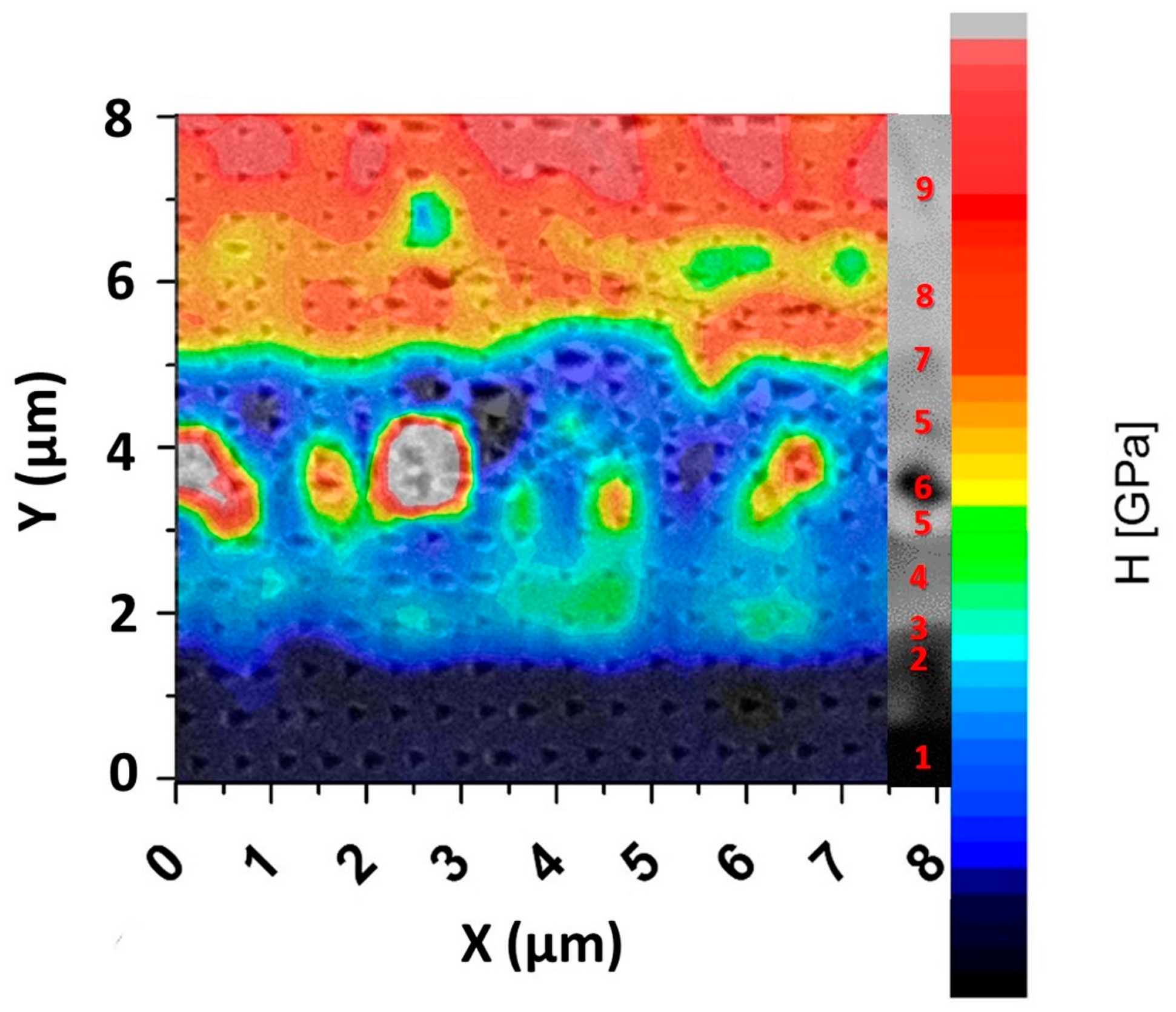