In the field of construction, securing the early strength of concrete (on the first and third days of aging) has been an important problem in deciding the mold release time (i.e., shortening the construction time period). Therefore, the problem of reduced compressive strength in the early aging stage caused by mixing granulated blast furnace slag (GBFS) with concrete must certainly be resolved. In this study, we conduct experiments to explore methods for generating a concrete that develops an early strength equivalent to that of 100% OPC. The objective of this study is the development of an early-strength accelerator (ESA) made from an industrial by-product, for a GBFS-mixed cement mortar. This study also analyzes the mechanism of the early-strength generation in the concrete to evaluate the influence of the burning temperature of ESA on the optimal compressive strength of the concrete. According to the results of the experiment, GBFS, whose ESA is burnt at 800 °C, shows an activation factor of 102.6–104.7% in comparison with 100% OPC on the first and third days during early aging, thereby meeting the target compressive strength. The results of the micro-analytic experiment are as follows: ESA showed a pH of strongly alkaline. In addition, it was found that the content of SO3 was high in the chemical components, thus activating the hydration reaction of GBFS in the early age. This initial hydration reaction was thought to be due to the increase in the filling effect of the hydrate and the generation of C-S-H of the early age by the mass production of Ettringite. View Full-Text
Keywords: early strength accelerator (ESA); granulated blast furnace slag; early strength development; industrial by-product early strength accelerator (ESA); granulated blast furnace slag; early strength development; industrial by-product
►▼ Show Figures 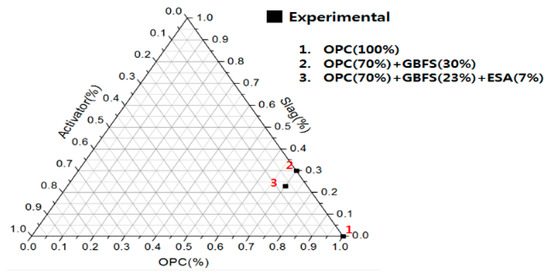