In situ Observation of Phase Transformation in MnAl(C) Magnetic Materials

Effect of Coiling Temperature on Microstructure, Properties and Resistance to Fish-Scaling of Hot Rolled Enamel Steel

Porcelain enamel coatings for steels possess chemical and mechanical stability in various environments, including acid, alkaline, high-temperature and harsh working conditions, and so are widely used for a variety of consumer applications and for the protection of steel in many industrial chemical applications [1]. Hot rolled enamel steels are widely applied to water treatment equipment, chemical reactor, and environmental protection equipment due to their excellent corrosion resistance and sufficient yield strength for engineering design.
Fish-scaling is one of the most dangerous and common defects in the production of enameled steel products. Fish-scaling has been defined as the development of a considerable amount of hollow semicircles on the surface of coated items that together resemble fish scales, and which exert a detrimental surface aspect [2]. It is caused by an excess of hydrogen which dissolves into the steel during the enameling process, especially during the enamel firing at the temperature of 800–850 °C [3]. Since its solubility dramatically decreases during the following cooling process, hydrogen moves toward the steel-enamel interface in quantities that cause fish-scaling even after a lapse of time.
Sufficient hydrogen traps are needed to ensure good resistance to the fish-scaling of steels. Precipitates are the main irreversible hydrogen traps in hot rolled enamel steels. Large quantities of precipitates mean good resistance to fish-scaling. Challa et al., revealed that the distribution and the number of precipitates was a function of coiling temperature [4]. That is to say, excellent resistance to fish-scaling of hot rolled enamel steels can be obtained through controlling coiling temperature. In this work, the effect of coiling temperature on microstructure and properties of hot rolled enamel steel was investigated. The purpose of this work is to elucidate the relationship between resistance to fish-scaling and microstructure of hot rolled enamel steel.

The chemical composition of experimental steel is listed in Table 1. The experimental steel was melted by a vacuum induction furnace and cast to a 150 kg ingot. The ingot was forged to billets with a section of 50 mm × 120 mm. They were reheated to 1200 °C and held for 2 h, then hot rolled to sheets of 5 mm thick at finishing temperature of 900 °C. The sheets were subsequently water cooled to coiling temperatures, and the coiling temperatures were 600, 650 and 700 °C, respectively.
Metallographic specimens were cut along the transverse direction, then were polished and etched with a 4% nital solution before the observation by means of Leica DMIRM 2500 optical microscope (OM, Leica, Wetzlar, Hesse, Germany). Transmission electron microscope (TEM) observations were carried out on 3 mm diameter thin foils by FEI Tecnai G2 F20 TEM (FEI, Houston, TX, USA) at an acceleration voltage of 200 kV. Thin foils were prepared by twin-jet electropolishing using 10% perchloric acid in ethanol.
Tensile specimens with size of 50 mm × 12.5 mm were machined from the sheet along the transverse direction. Standard tensile tests were conducted at room temperature by using a crosshead speed of 3 mm/min on a CMT5105 tensile testing machine (MTS, Shenzhen, Guandong, China).
A hydrogen permeation test was conducted at 25 °C by using electrochemical method developed by Devanathan and Stachurski [5]. Square specimens with area of 50 mm × 50 mm were cut from the hot rolled steel sheets. The specimens were degreased with acetone and then cleaned in distilled water. The hydrogen permeation setup was composed of two parts separated by the specimen into the hydrogen charging cell and hydrogen releasing cell. The cells were purged with high-purity nitrogen gas to remove the dissolved oxygen from the solutions before the hydrogen permeation test [6]. The specimen was fixed on the electrochemical cell using an O-type ring. The charging cell was filled with 500 mL 0.5 M H2SO4 + 0.22 g/L H2NCSNH2 solution, and the releasing cell was filled with 500 mL 0.2 M NaOH solution. In the charging cell, hydrogen atoms were introduced by cathodic charging (H+ + e→H). H2NCSNH2 facilitated hydrogen pick-up by promoting the breakdown of molecular hydrogen. The hydrogen oxidation (H→H+ + e) current can be measured in the releasing cell under an applied constant anodic potential.
The determination method of hydrogen permeation time is described in reference [7]. The typical hydrogen permeation curves are shown in Figure 1. The current-time curve (I-t curve) of hydrogen permeation is shown in Figure 1a. The current increases slowly at the initial stage of the test, and then increases quickly, finally achieves a steady state. The charge quantity-time curve (Q-t curve) can be obtained by integrating the I-t curve, as shown in Figure 1b. Through the lowest point of the Q-t curve, making a line parallel to the X-axis. The steady state section of the I-t curve corresponds to the linear section of the Q-t curve, making a tangent line to the linear section. The two lines intersect each other, and the abscissa value of the intersection point is the hydrogen permeation time. The hydrogen permeation value (TH) can be calculated by using the following formula. where tb is the hydrogen permeation time in minutes; d is the sheet thickness in mm. Large hydrogen permeation value means high hydrogen storage capacity and good resistance to fish-scaling of enamel steel.
Ma et al. revealed that the TH value was a constant when the thickness of sheet was larger than 0.6 mm [8]. The specimens for the hydrogen permeation test were machined to 2.8 mm in thickness in order to reduce the test duration.

The mechanical properties of experimental steel coiled at different temperatures are listed in Table 2. It can be seen that both yield strength (YS) and ultimate tensile strength (UTS) decrease with increasing coiling temperature, while elongation increases. As high coiling temperature can lead to large ferrite grain and small size of precipitates, it can be concluded that the contribution of ferrite grain size to strength is larger than that of precipitates.

In this study, three coiling temperatures were employed to investigate its effect on the microstructure, mechanical properties and resistance to fish-scaling of hot rolled enamel steel. TEM observation was conducted to clarify the precipitation behavior under different coiling temperatures. A hydrogen permeation test was employed to evaluate the resistance to fish-scaling. The following conclusions can be drawn.

Authors acknowledge the financial support from Shougang group and National Natural Science Foundation of China No. 51501031. 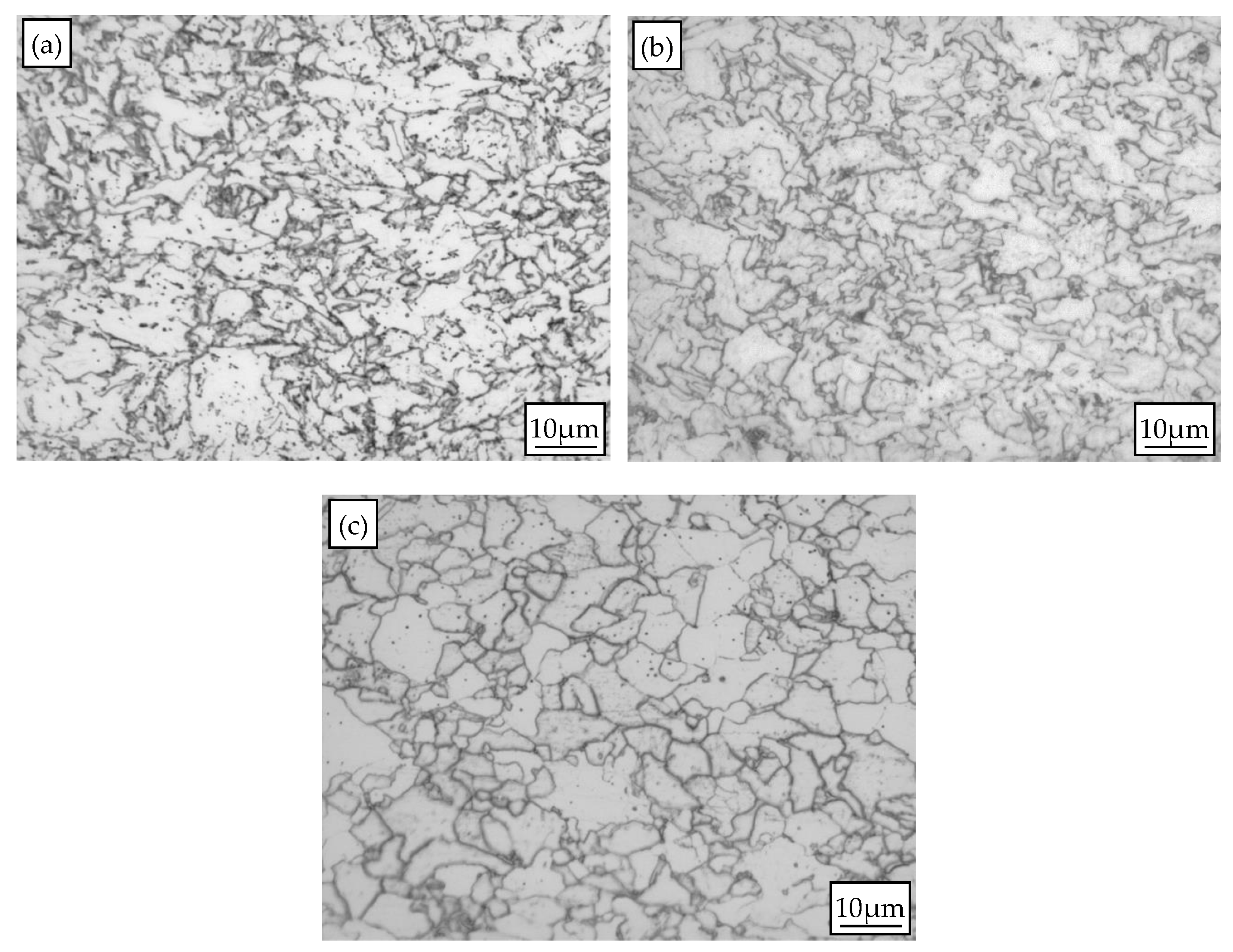