Influence of Partially Debonded Interface on Elasticity of Syntactic Foam: A Numerical Study

In order to ensure the statistical homogeneity of the model associated by randomly distributed debonded microsphere, five different representative volume elements (RVEs), having the same of 50% but with different arrangements of debonded microspheres, were built (Figure 4). The = 50% was chosen because the randomness occurred due to the random arrangement of the debonded microspheres was expected to be the highest in this condition. Table 1 shows the compressive and tensile moduli obtained by the five different RVEs shown in Figure 4. The standard deviations of the moduli were ~3.7 MPa in compression and ~7.0 MPa in tension, which are negligibly small compared to the obtained moduli, accounting for less than 0.3% of the averaged modulus in tension and even less in compression. This indicates that the RVE consisting of 30 microspheres is large enough to statistically represent the behavior of the syntactic foam with randomly arranged debonded microspheres.
Figure 5 shows the evolution of the elastic modulus and the Poisson’s ratio obtained by the mixed model with increasing in tension and in compression. Both the compressive and tensile moduli decreased with increasing . The tensile modulus decreased more sharply with than the compressive modulus, which is believed to be due to a lower load transfer capability in tension than in compression associated with debonded interfaces. While under tension, the applied load caused a pair of cap-type gaps at the debonded interface, and the load transfer from the matrix to the microsphere occurred only by the compressive forces perpendicular to the loading, associated with the Poisson effect of the matrix. Conversely, in compression, the applied load can directly transfer from the matrix to the microsphere by compressing the microsphere along the loading direction, and the reduction of the overall stiffness occurs only by the effect of lesser CONFINEMENT in the direction perpendicular to the loading. This effect is clearly indicated in Figure 6, where the deformed geometries, and the equivalent stress fields in tension and compression, are compared. In the figure, the cap-type interfacial gaps between the microsphere and the matrix are clearly seen in tension, while in compression only thin cracks perpendicular to the loading were observed. It can be also seen that the stress in the microsphere is much higher in compression than in tension, indicating that more load is transferred to the microsphere.
The Poisson’s ratio shown in Figure 5b was calculated by measuring two independent apparent displacements of the model side walls perpendicular to the loading axis, and taking the average of the two measured values. The variation between the two obtained values for the Poisson’s ratio was very small - less than 0.01 - for every case indicating that the multi-particle unit cell used here has a sufficiently large number of microspheres to have nearly isotropic behavior. As shown in Figure 5b, the Poisson’s ratio under tension decreased with , while the Poisson’s ratio under compression increased. This can be explained by the formation of the interfacial gaps associated with the deformations, which expands the overall volume of the model by introducing gaps into it. The volumetric expansion during deformation causes a reduction in the Poisson’s ratio in tension, which is the opposite in compression.

As shown in Figure 2b, the partially debonded model has a microsphere in which the debonding occurs in one direction only. Considering its axisymmetric geometry, the model can be considered as a transversely isotropic material with five independent elastic constants: elastic modulus and Poisson’s ratio in the isotropic plane ( and ); elastic modulus, Poisson’s ratio and shear modulus associated with the out-of-plane direction (, and ), where the subscript and refer to transverse and parallel directions to the normal direction of the plane of axisymmetry.
Figure 7 shows the elastic moduli and the Poisson’s ratios for the models as a function of . For the symbols used in the figure, the superscript T and C indicate the moduli obtained from tension and compression, respectively. The elastic properties in the isotropic plane, i.e., and , were obtained by applying loads to the models in the direction parallel to the debonded interface. The out-of-plane properties, i.e., and , were obtained by applying loads in the direction normal to the debonded interface.
As can be seen in the figures, deviations between and are more significant under tension than under compression. Similar behavior can be also found in the Poisson’s ratios. Both the tensile and compressive moduli decreased with increasing . The Poisson’s ratio decreased in tension and increased in compression, which is the same trend seen in the results from the mixed model.
The single particle unit cell assumes that all the debonding gaps are aligned perfectly along one direction in the syntactic foam. For the foam having randomly oriented debonding gaps, the moduli can be estimated by taking the orientational average of the mechanical strain concentration tensor, as shown in prior studies [31,32]. The non-zero components of the compliance tensor for the single particle unit cell, ( = 1,2,3) in the coordinates () are given by:
The compliance components satisfy the following symmetry relations
For the calculations, the independent shear modulus, , was estimated by applying a pure shear strain of 1% to the models. As similar to the uniaxial loading cases, all the outer faces of the models were constrained to have flat surfaces during shear loading. Figure 8a shows the deformed shape and the equivalent stress distribution of the model under shear loading. The resulting evolution of the shear moduli with increasing is shown in Figure 8b. The effective elastic compliance tensor for the randomly oriented partial debonding, denoted by superscript *, is given in prior studies [31,32]: where , and are the angles indicating the transformation from the unit cell local coordinates () to the global coordinates () (Figure 9a). is the direction cosine for the transformation given by
The resulting elastic compliance tensor is isotropic, which is the averaged value for all the directions in three dimensions. The orientation-averaged elastic modulus for the randomly oriented partial debonding can be obtained from the resulting compliance tensor as follows:
The elastic moduli calculated by Equation (5) for models having a different are plotted in Figure 9b, for tension and compression.

The compressive and tensile elastic moduli of the discontinuously bonded model were obtained with a different number of splits, and are listed in Table 2. The behavior of the model was closely isotropic because the debonded areas were quasi-uniformly distributed in all directions. For different model geometries, the compressive modulus of the model remained unchanged at around 2920 MPa, whereas the tensile modulus increased notably from 2767.4 to 2934.9 when the number of splits increased from 8 to 48. The Poisson’s ratios of the discontinuously bonded model was found to be nearly constant at 0.31 ± 0.05.

In this paper, a detailed numerical study on the elastic properties of the syntactic foam with a debonded interface has been presented. Three types of FEM models were used to predict the overall elastic behavior of partially debonded hollow microsphere reinforced syntactic foam. The multi particle unit cell was applied to model the foam, consisting of fully-bonded and debonded microspheres, while the models having an interfacial gap on each microsphere, or sparsely interconnected microspheres, were investigated through the single particle unit cell approach. All the models showed a reduction of the elastic modulus when increasing the ratio of debonded area to the total interfacial area between the microsphere and the matrix. The tensile modulus was considerably influenced the debonding geometry, while the compressive modulus was almost unaffected by it. For the fixed ratio of debonded area to the total interfacial area, a higher tensile modulus was obtained for the smaller interfacial gap size in relation to the size of the microsphere. When the interfacial gap was much smaller than the size of the microsphere, there was no disparity between the tensile and compressive moduli. Although the models used in this paper have not yet been validated due to the lack of experimental data for the detailed debonding geometry of the syntactic foam during loading, some experimental observations on the elastic modulus being less than the theoretical value could be well explained by the numerical results from the models.

This study has been conducted with the support of the Korea Institute of Industrial Technology as “Development of metal powder large-area DED process including pre- and post-processes based on simulations (KITECH-EO-17-0041)”. 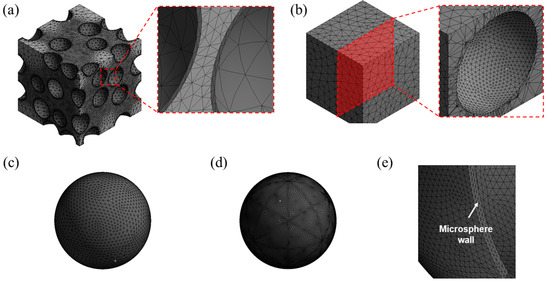 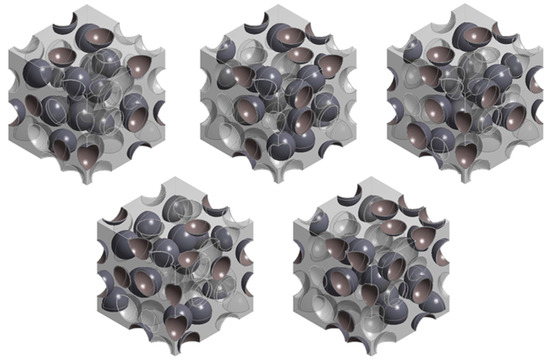 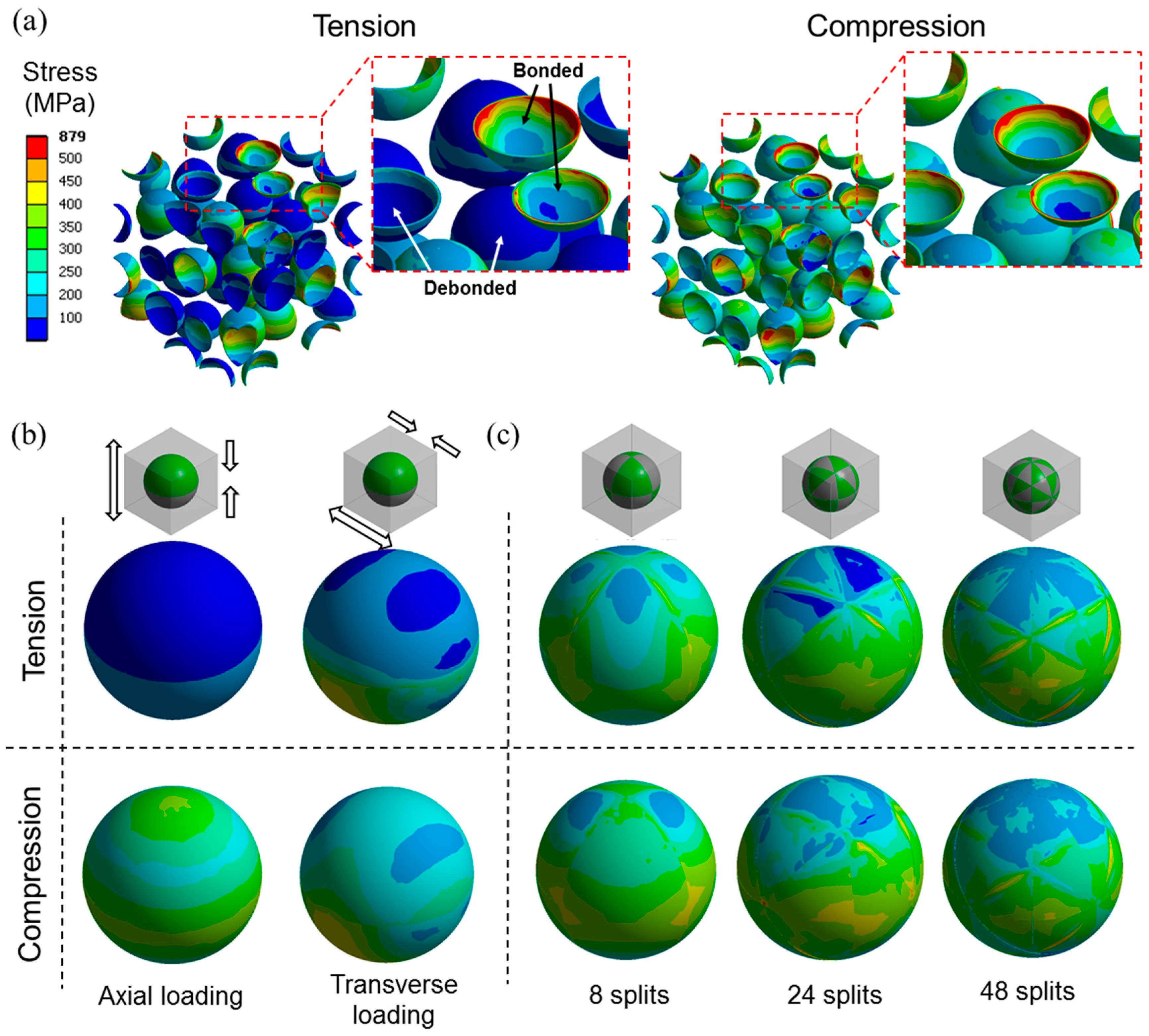